There was an old country song that went “You don’t miss your water ’til your well runs dry.”  This was a reference to the end of a love affair, but it is now being experienced in a literal sense.

I learned, while having breakfast at Eagle Guest Ranch, Datil, NM, last Tuesday morning, that the village of Magdalena, twenty miles or so further east, had indeed used the last of the water in its well.  Emergency rations were being trucked in from Socorro, by the New Mexico National Guard.

This will threaten the old village’s very existence, so I went there to have a look at Magdalena, and say prayers for the resolution of this matter.  Magdalena is the harbinger of what could become a widespread phenomenon, throughout the arid West, and Plains region.

Here are some scenes of the small town itself.  On the left, is the old train depot and on the right is the Ilfeld General Store, now used as residential and office space. 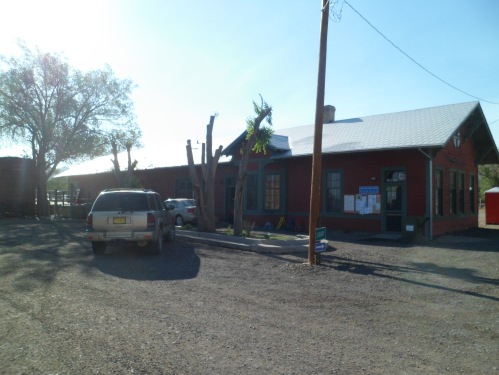 These, and some thriving motels and restaurants, will be the immediate victims of the impending dry-out.  The schools and medical clinic will be next, impacting both Magdalena and the Alamo Navajo Community, twenty miles north.

All New Mexico is embracing this small community, and nowhere is the action more intense, though quiet, than at New Mexico Mining and Technical Institute, in nearby Socorro.  The biggest issue, immediately, is to find a drill which can penetrate the unique rock of the Magdalena area.  It is apparently just the right mix of igneous and sedimentary rock that has defied conventional well-drilling equipment, up to now.  The greater issue, long-term, is a water replenishment plan that will require drastic rethinking of settlement patterns and conservation strategies.  The main center for this research, then, is here:

Magdalena, then, is Ground Zero for the Quiet Crisis that faces us all in the arid regions, the world over. (Think the Middle East is unsettled now?  Wait until the battle for the Euphrates and Tigris heats up.)

Here is the latest on the situation in Magdalena.  Stay tuned.

ALBUQUERQUE (KRQE) – Operation Hope, the water collection drive headed up by the Albuquerque Police Department has collected six moving trucks worth of water which will be shipped to Magdalena, New Mexico.

Water in the town of Magdalena started running dry in the wells a few weeks ago. Since then, tanker trucks have been bringing in water from nearby towns.

As a result of the water shortage, the town has also had to resort to using port-a-pottys in some places as an alternative to toilets.

APD says they will continue to collect bottled water to take to Magdalena in the coming weeks.”- Courtesy of KOAT-TV,Albuquerque, June 21, 2013.

9 thoughts on “Missing Their Water”