Korea abounds in traditional folk villages, as do many nations who seek to preserve their traditional culture-in the face on onrushing development and prosperity.  Jeju’s premier folk village, which I have visited on three other occasions, is Song-eup, not far from Songsan, in the eastern part of the island.

By chance, when Aram, Yoonhee and I arrived here, we were introduced to the same woman who had,as a newly-wed, told Penny and me about the way of life here, some thirty-two years ago.  I recognized her, though she didn’t remember me.  A good-natured, saucy young woman had matured into a dedicated advocated for preservation, with an encyclopedic knowledge of her subject.

Song-eup proper was, and is, a walled community.  Pirates from Japan were known to occasionally stage raids on towns, in the eastern and southern coastal areas of Korea.  This was enough of a problem that Korean Admiral Yi Sun-shin, one of history’s greatest military commanders, led his sailors to victory over both the pirates and their imperial enablers, in the Imjin War of 1592-98.  The walls helped stem the pirate attacks, in the short term.

This system of roof thatching was used by high and low alike, across Jeju.  The villagers on the west of the island used different material, but the system was the same.

Stone guardians, nowadays called dolharubang, or “stone grandfathers”, graced the entrance to every village in Jeju.  They are now symbols of the island’s culture.  The one on the right is an example of  Koreans’ playful spirit. 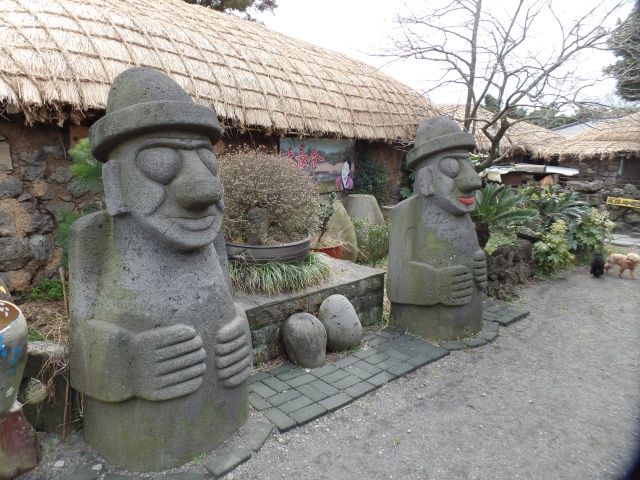 The black pig is one of Jeju’s primary domesticated animals-sometimes used as a watch animal, but more commonly raised as livestock.

This house, with its foreroof, is an example of a wealthier person’s residence,as it has an up-step. 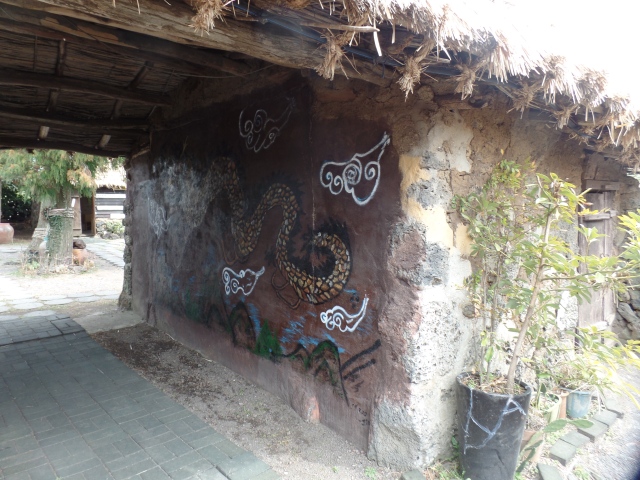 Here is an example of a more humble person’s residence,with no up-step. 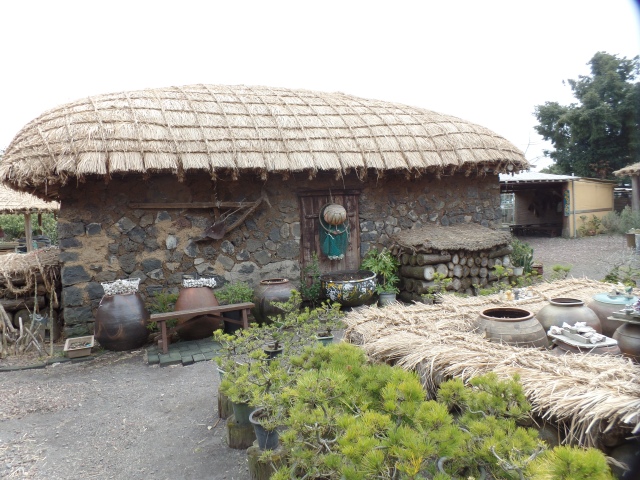 Roof thatch is replaced every five years.  These grubs are found, in the hundreds, thriving in the thatch. 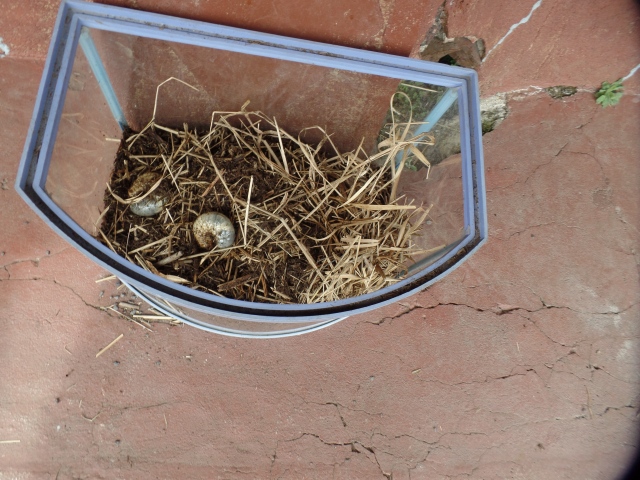 Usually, grinding stones in Korea were pulled by oxen.  On Jeju, horses pulled stones like this one. 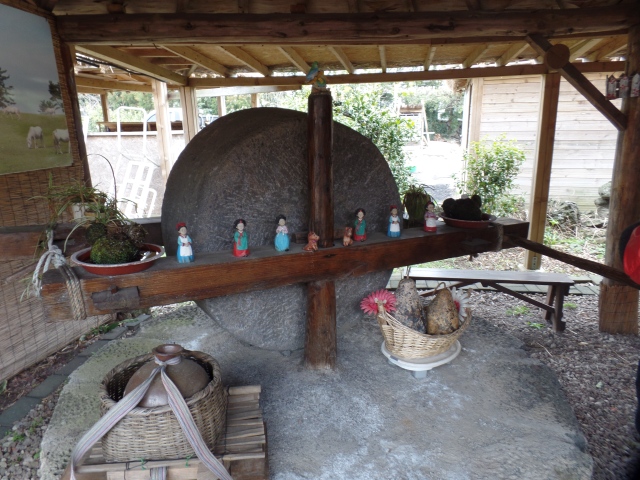 Masks were mounted as a defense against harm, in the days of shamanist Korea. Back then, Jeju was called Tamna.  Legend has Tamna established by three men, Go, Yang and Bu, who emerged from three holes-in an area, called Samseonghyol, that is still preserved in Jeju-shi.  Tamna simply means “island nation”, in Jeju’s indigenous language.  There are still a small number of indigenous Jejuans, living in the foothills of Halla-san.

After thanking the docent for her time and sharing, we spent a few minutes in an educational institute, on the outskirts of Song-eup.  Here, another docent showed us more mock-ups of early village life.  Here is a display of an outdoor kitchen. 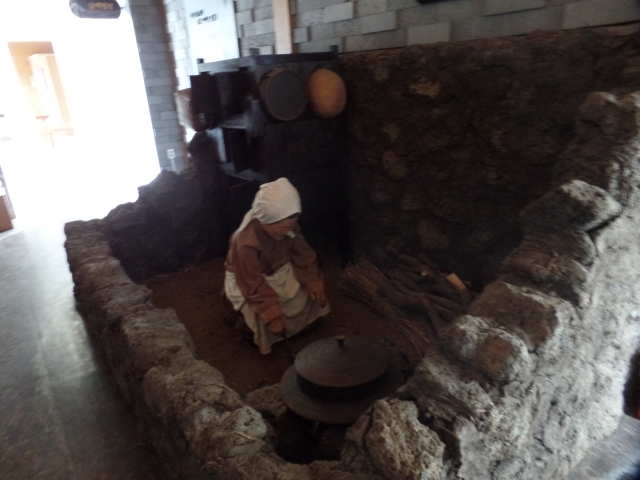 As we walked towards the walled, main section of the village, we spotted a fuller example of a long cottage, with an up-step.

This house was called the “House of Two Dragons”, by its early owner.  Thus, here is a sculpture of  the double threat. 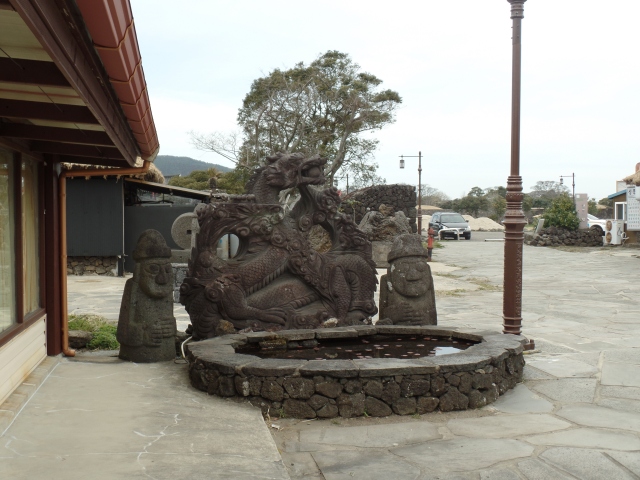 Stone guardians can reflect a wide variety of expressions.  Most are serious; some can be mirthful.  These are definitely not in a good mood.

Here is the West Gate, through which we entered Song-eup proper.

Here is  a full view of a Song-eup street.

Large Korean cabbage, a primary ingredient in much kimchi, is a key crop of Jeju. It is related to the Chinese bok choi. 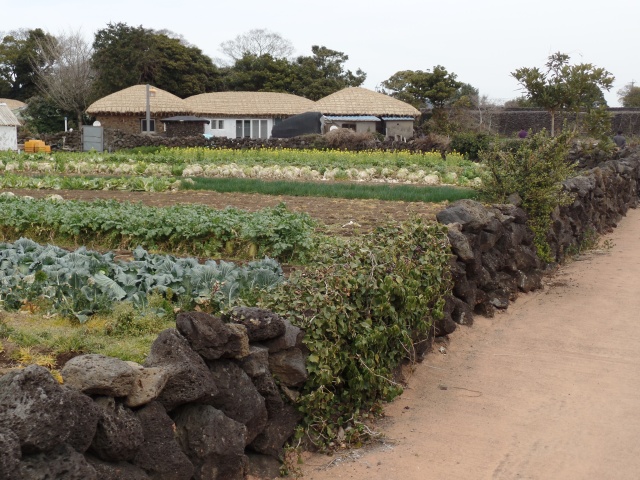 Han Bong-il, a wealthy farmer of old Jeju, left this farmstead to the government, which now preserves it as an historic home. 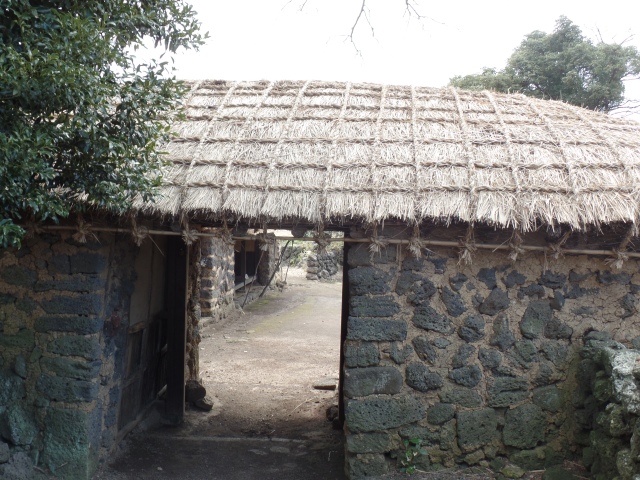 This is the Peddler’s Inn, located in front of the main Guest House. The former housed people wishing to sell items to or supplicate the magistrate and other officials, who themselves stayed in the Guest House.

Here is the main Guest House. 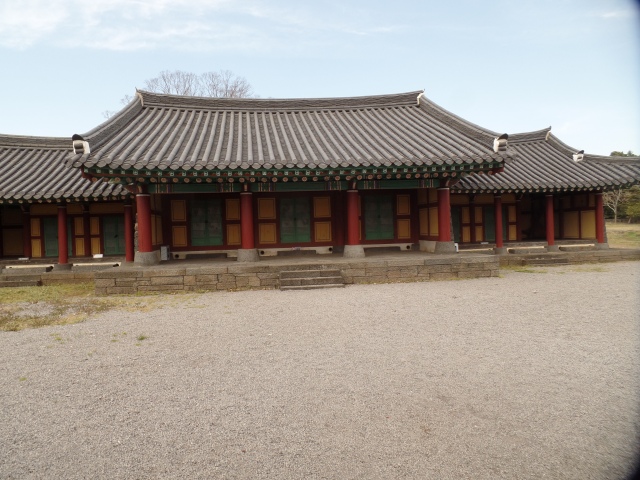 This is the entrance to the  old seat of government in Song-eup. 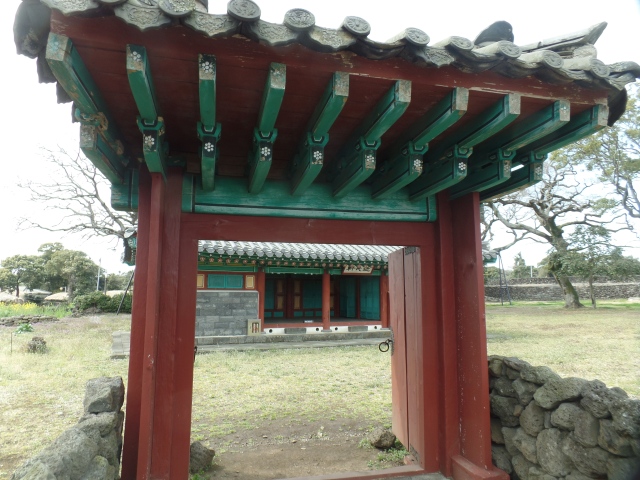 This is Mokgwana, the actual office of the magistrate.

Large. old hackberry trees are often top heavy,with age.  This tree needed to be shored up by a system of cables and metal stands.

At this Confucian school, another docent guided us around the areas that are open to the public, whilst explaining that the main courtyard was off-limits, due to an earlier high volume of traffic, detracting from the serenity of the place.

Here is a fuller view of the school and courtyard.

We left Song-eup, in a tranquil mood. Headed westward, we stopped at a rest area, to get this view of Halla-san, rising proudly in the background. 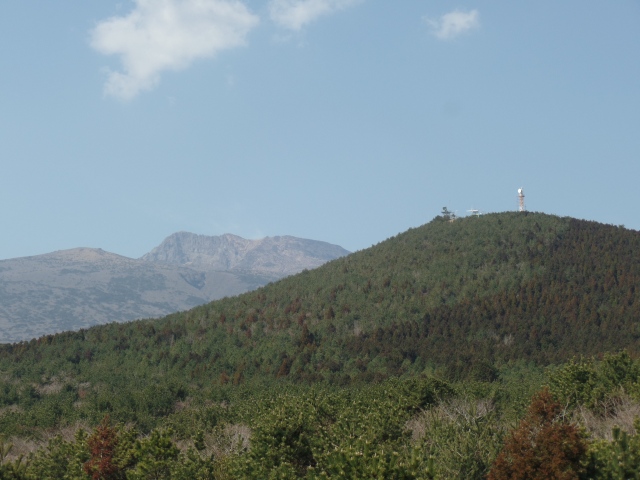 The day was only half over!

NEXT:  Jusangjeoli and Jeongmyon- Two Wonders of Wind and Water