I came to the highest point of the Grand Canyon of the Colorado River, a bit earlier than planned.  My initial goal of hiking the Uncle Jim Trail, in honour of my late uncle, met up with the reality of approaching sunset.  I decided to head for the twin high spots, Point Imperial and Cape Royal, instead.

Point Imperial, the eastern flank of the North Rim, gazes towards the Navajo Nation and the various smaller canyons of the Paria River basin and House Rock Valley.  Such Grand Canyon landmarks as Vishnu Temple and Desert View Tower may be seen from here. The shadows were creeping in,though, so that added to the sense of grandeur. 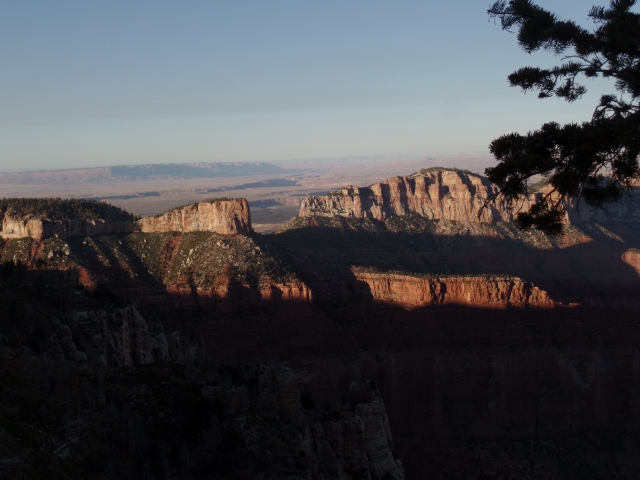 A soldier is, of course, watching.  This is also the best spot on the North Rim from which to get a clear view of the Colorado River.

The striation of the entire canyon wall may still be discerned, layer by layer.

It appears that the various peaks are lined up, almost directly, north to south, across the canyon.

Seeing the shadows lengthening, I headed west, towards Cape Royal. It was this leg of the trip which reminded me that I am living in a society that often knows only “full speed ahead”.  The professional photographer, whom I mentioned a few posts ago, was on my tail, the entire fifteen miles.  We both made our goals, though, so the forty mph zip was an odd footnote.

One side feature, along the Cape Royal trail, is Angel’s Window, an eroded spot in the middle of  a sandstone promontory, on Cape Royal’s east side. 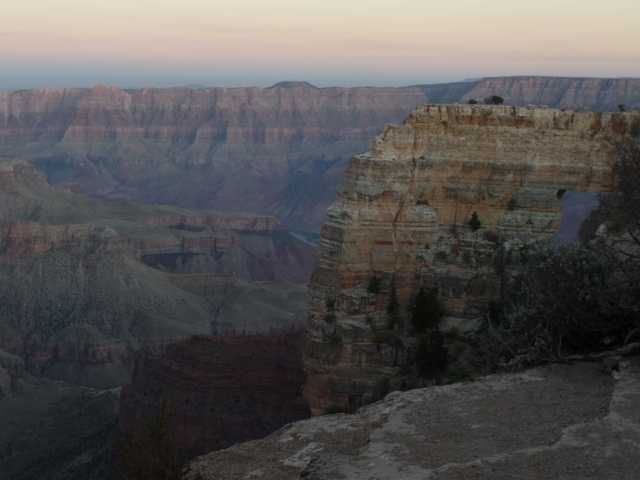 The Cape offers a full-on view of the Canyon’s majesty, even towards twilight, as it faces mostly west and south.

Below, is a better view of Angel’s Window.

There is always majesty in  the gloaming.

The final moments of a sunset confirm that all is well. 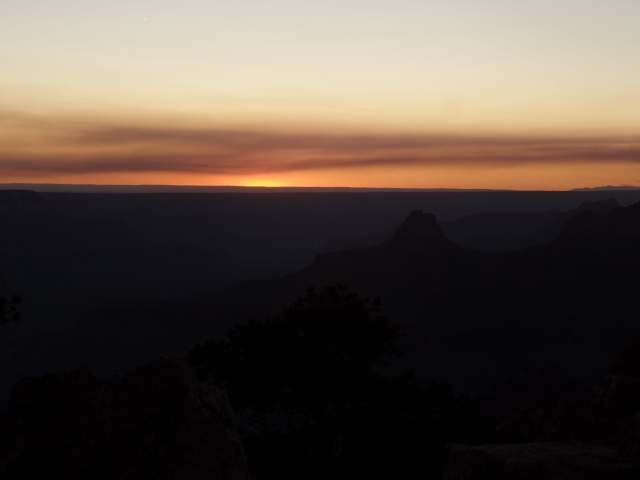 So, I bid farewell to the North Rim, for now.  Uncle Jim Trail still awaits-on June 3, which was his birthday.

NEXT:  The Legacy of Glen Canyon Dam

2 thoughts on “The Peak of the Canyon: Part III”