The Hassayampa River (Assiampa, in Apache, for “waters hidden underground”) mostly lives up to its name.  It rises in the Sierra Prieta Range, on the west side of Phoenix, and flows downhill to the area occupied by the small ranching and mining town of Wickenburg, about an hour northwest of Phoenix.  The town, in turn, is named for Henry Wickenburg, an entrepreneur in rail and mining, in the Arizona of the late 19th/early 20th Centuries.

I went down there yesterday, to visit two of the area’s three defining places:  The Hassayampa Riparian Preserve and Desert Caballeros Museum.  This post shows some scenes of the preserve, which is manged by The Nature Conservancy.  Most of the land is flat, save a small outcropping, called Lyle’s Lookout.

Here are some scenes of Palm Lake Loop Trail. 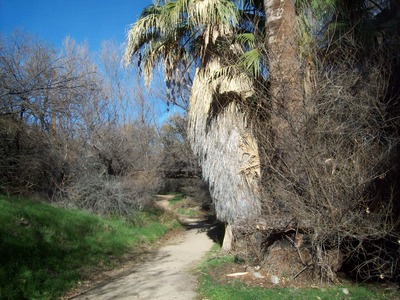 Note the “beard” or dead frondage, on the palm. 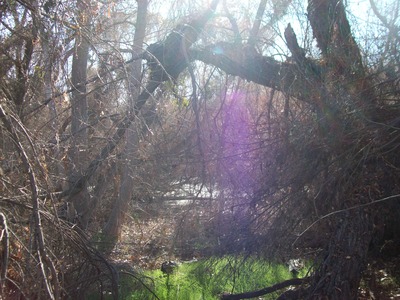 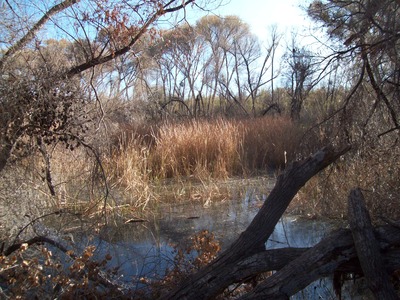 Palm Lake used to be pumped and cleaned up.  Now it is left alone.

The Conservancy prefers to keep its holdings in their natural state.

The midsection of the Preserve is mostly dry. 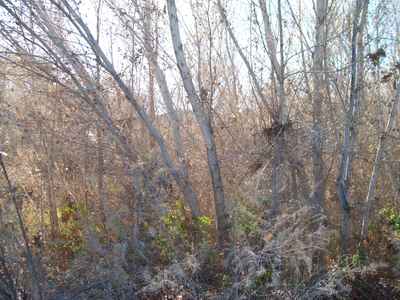 As one gets towards Lyle’s Lookout, however, the Hassayampa emerges from underground.

The Lookout itself affords a fine view of surrounding mountains.

The approach to Lyle’s Lookout. 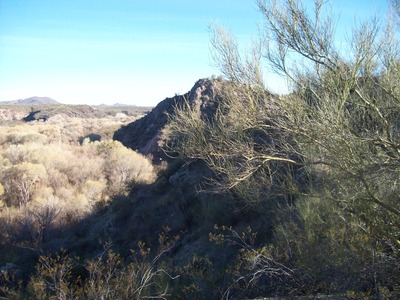 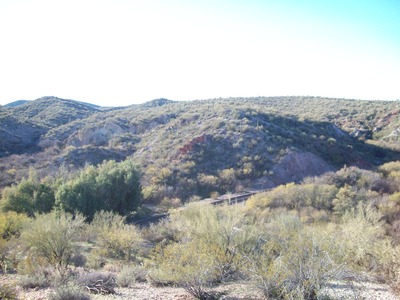 Virtually every town on the coast of New England has its share of heartwarming scenery and historical buildings, conjuring up images of maidens in full dresses and head bonnets, and men in black jackets, pants and wide brimmed hats.

Actually, the cobblestones have pretty much disappeared from Marblehead, which is a shame.  The streets, though, will NEVER be wider than what it takes for drivers to be ladies and gentlemen with each other, and with bicyclists.  I had to make a choice this time, for financial and time reasons, between going to Marblehead or going to Salem.  I chose Marblehead, because it is compact and because understanding this little town does not involve going to museums, and it can be appreciated fully in a span of one hour.  Salem requires at least a day.

Marblehead is a major sailing venue, and among other claims to fame, it was the home of Elbridge Gerry, who gave us gerrymandering of congressional districts.  This may not be something of which modern Marbleheaders would boast, but Bay Staters tend to gravitate towards positions of influence. 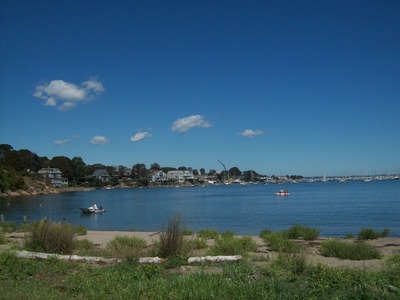 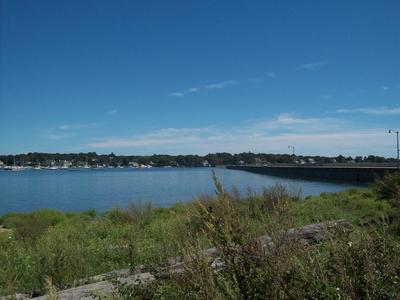 The immediately preceding photos are of Marblehead Neck

Now for some old style New England clapboard houses, some of which were originally built in the eighteenth century, during Marblehead’s clipper ship heyday. 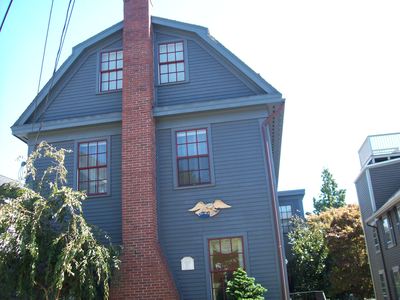 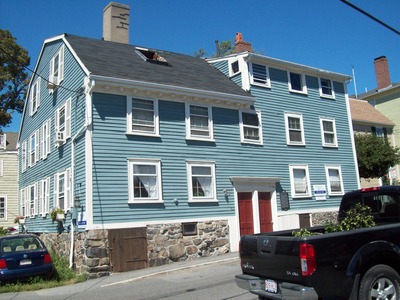 The Three Cod Inn is the site of an act of Revolutionary War bravery.  An eighteen-year-old man fought off several British soldiers, using items of furniture at his disposal, whilst less brave onlookers cheered him. 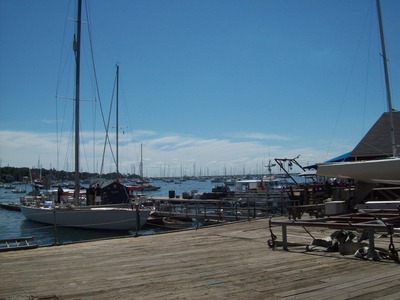 To the left is Marblehead’s central marina.  A Great Race was held there yearly when I was in my late teens and early twenties.  I didn’t learn to sail until much later, but it was always a great time to gather and carouse.   New England’s coast is blessed with towns like this, and I am lucky to be enjoying them.

In the late 1960’s, a Boston funk-rock group called The Standells did a medley of their hit.  It was called “Dirty Water” and has become a staple of Boston rock history.  It centers around the Charles River, which runs through Boston, and separates the Hub of the Universe from neighbouring Cambridge.  The song alludes to the stench of the Charles River in those days.

A series of mayors in both cities took steps to remove that onus, and today, the Charles is a perfectly enjoyable venue for sculling, and for walking along its banks.

I spent yesterday walking from Harvard Square to the John Hynes Convention Center, just north of  Boston’s Chinatown.  Much of that walk was along the east and south banks of the Charles. 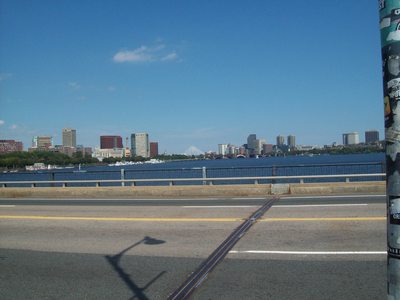 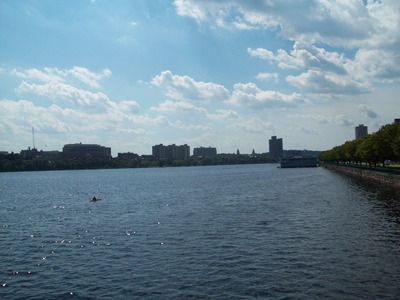 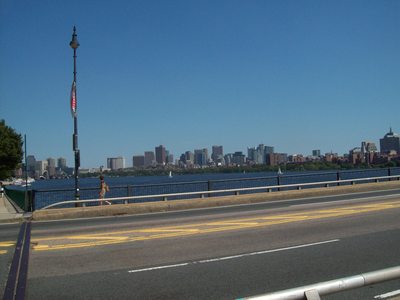 Before crossing the Harvard Bridge, I walked off on a tangent, north to Cambridge’s Central Square.  The “town” aspect of Town and Gown Cambridge had not been the subject of my perusal up to now.  Every city and town have their story, though, so I walked north, past some intriguing edifices.  Question:  Would you paint your house in such eye-catching fashion? 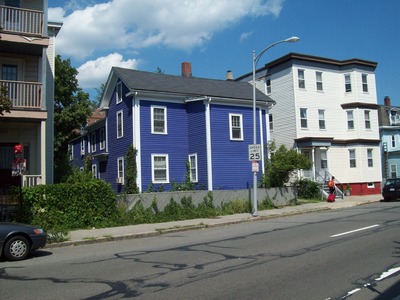 Next up, I spotted a small pub called “River Gods Food and Spirits”.

After a half-mile or so, came Central Square, a hearteningly cosmopolitan area.  South Asian and Middle Eastern shops and eateries vie with Irish establishments (Asgard is the best known of these) and Caribbean restaurants. 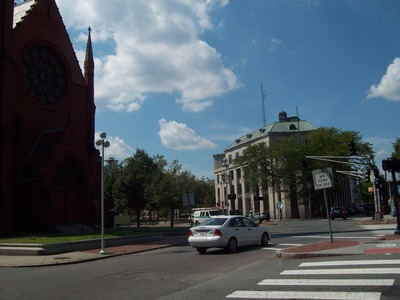 I then walked back along Massachusetts Avenue, and came to Kendall Square, and MIT, a half-mile further.

MIT is a perfect counterpoint to Harvard:  The future, and technology, balancing the Arts, Letters and Divinity, and tradition.

Yet, everything intertwines.  Harvard has its world-class Medical School, and is fully involved with the Sciences.  MIT is concerned with climate change, and all the politics that go with that concern.  Both Harvard Square and Kendall Square are lively gathering places, with world-class entertainment venues and eateries.  In the middle of it all remains workaday Central Square, alive and aware.

I posted this last summer, while visiting my hometown.  This is the first of two more reposts from my cross-country visits of that time.

After resting up, following my eye exam this morning(Sept. 1, 2011), I decided to walk down to an old childhood favourite:  The Saugus Ironworks.

Many high school students learn in their US History classes that this simple colonial foundry was the birthplace of the American iron and steel industry.  There is a bit more to the story than that.  This place was inhabited by the Pawtucket people (aka Penacook), for several thousand years. The location itself was called Pawtucket.  The hills just to the northwest of the Saugus River were called Tontoquon.  These were the focus of settled activity by the Pawtucket Nation.

When the Puritans, led by John Winthrop, settled Boston in 1621, they were looking for a place in which to produce iron locally.  At first, they tried the hamlet of Braintree, 16 miles south of Boston, but found it meager as a foundry venue.  An engineer named John Leader came from England, explored the lands of the Pawtuckets, and found a spot on the Saugus River.  He named the place Hammersmith, and began the iron-making operation.  Scottish indentured servants were brought in to do the non-farming labour that was loathed by the Puritans.  The Scots were a rowdy, but hard-working bunch and made a good effort at producing quality iron.  Leader and his Board of Directors were not sound businessmen, however, and the business failed after less than 20 years.

In the 1940’s and 50’s, archaeologists and housing developers found remnants of the colonial-era operation.  Sixty years later, the ironworks is restored, so that we may give the early efforts at self-reliance the attention they deserve. 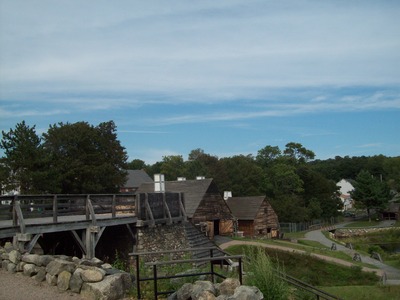 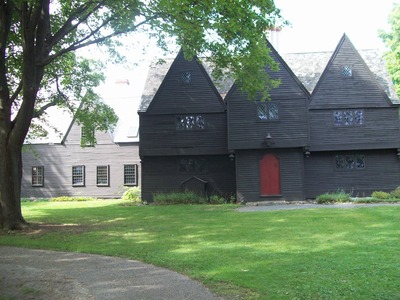 Here are some close-ups of the forge, the rolling  and slitting mill, the blacksmith shop and the river that helped it all happen. 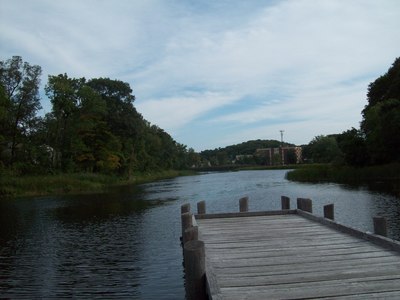 The Scottish iron workers, and their descendants, carried the ironworking tradition to other parts of the country.  One such new ironworking locale became Pawtucket, RI, in honor of the ironworkers’ first hosts.  Saugus, the name that the Pawtuckets gave to the river, eventually became the name of the town in which the Ironworks is preserved.

I learned a lot of this, and more, at the Saugus Public Library, when I visited it on an average of 3 days a week from the time I was ten until I graduated high school.

These are two of my passions:  Exploring and learning.

HIGHLIGHT: Walking along the river of my youth.

Leonid Ksonfomaliti, a Russian astronomer, has stated that his analysis of photos taken by an exploratory vehicle on the planet Venus indicates that some objects seen in the photos are possibly living things.  Dr. K says he spotted three objects- a disc, a black flap and a scorpion, which appear to move and shift position independently, in a photo of a Venusian surface.

He suggests “boldly” looking upon these as evidence of life on the second rock from the Sun.  Who will be the entrepreneur who will build a rocket to Venus, and check it out?

This is reposted from Xanga