Genetically-Modified Organisms are industry’s attempt at feeding the masses, through altering the genetic codes of certain foods- Soybeans, corn, wheat are the most common items involved- and some tomatoes, potatoes and rice are affected as well.  The idea is to make big bucks, while fending off microorganisms and other pests.  It has had mixed results, in that regard.  Pests are rather clever at finding a way around the ruse, using their own genetic engineering.

In the meantime, we now look at the first long-term results of the tinkering.  Allergies, cancer levels and secondary mutations among farm animals are being traced to the GMO’s. GMO-free movements are cropping up, in many places being closely tied to the Slow Food movement, which, as one might guess, is a reaction to convenience foods and drive-through burger joints.  Locavores and farmers’ markets are the most common manifestation of the blend.

I had the pleasure, last Saturday, of visiting Orme Ranch, a pesticide-free, hormone-free cattle ranch, about forty miles east-northeast of Prescott.  The establishment has been around for about two decades now, and, while having its struggles with the agricultural establishment, may well represent the most promising future for meat production in this country.  The cost of treating diet-related diseases is not going to decrease, and the cost to our economy of health-related absences from work and school is far greater than any of the powers that be want us to recognize.

This is where “streamlining” and “efficiency” are falling off the tracks.  The Orme Ranch is, among other things, by following conscientious soil management, careful grazing policies, crop rotation and humane treatment of cattle, managing to keep soil erosion to a minimum and is actually restoring the water table- no small feat in our semi-arid grassland and chaparral- covered environment.  The larger operations, pretending to be “too big to fail”, may very well be bringing catastrophic failure on themselves, through practices that look good on the balance sheet, but are Pyrrhic in the successes they present.

The ranch wife pointed out something very humbling:  “The only true wealth comes from the earth.  It is grown, mined or hunted.”  All else, then, is wealth that exists on paper. 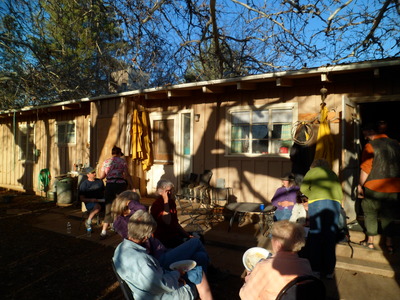 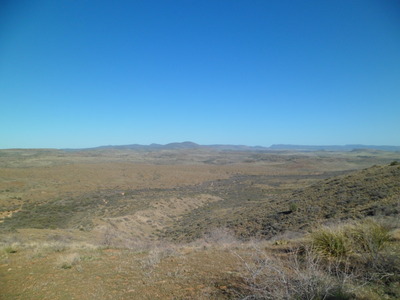 It may look desolate, but Orme Ranch is surprisingly productive.  I wonder, when I go to Colorado, Kansas, Oklahoma, and Texas next month, how many heartfelt farm and ranch folks will I encounter?