Many regard San Antonio’s Riverwalk as an artifice, a gimmick.  Actually, the gimmickry is man-made, with various high-priced shops and restaurants- some good, others mediocre- you be the judge of which. The river itself is intended to be enjoyed, in pretty much a manner such as that provided by the sidewalks and tunnels.  Southern rivers tend to be a bit on the muddy side, but that is a testimony to the richness of the earth.

For me, the ambiance that mild Wednesday afternoon was mellow and sweet.  People were taking their time strolling along the walkway, south of Commerce St.  The Tower of the Americas loomed large over the eastern end of Riverwalk.  As many know, the International Exposition of 1968 was held in San Antonio.  HemisFair Park is the legacy of that event, and the Tower of the Americas is its showpiece.

The walk itself, like the river, ambles at its own enjoyable pace. 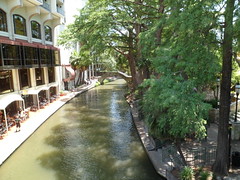 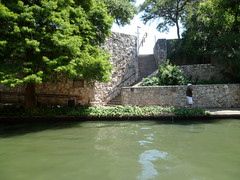 This is the entrance to Riverwalk, just off Commerce Street.

The underpass is its own world within a world.  It observes all around it, unnoticed and often passed by.

The gondolier, though, has a few stories about it, and the other segments of the river. 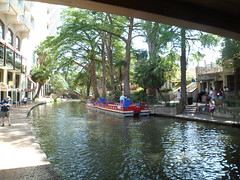 Once on the west bank of the river, it’s La Villita time!

This little group of plazas was the civilian sector of San Antonio, when the settlement was a fortress and mission.  It is here that the lion’s share of commerce was conducted, along with the hubbub of household life. 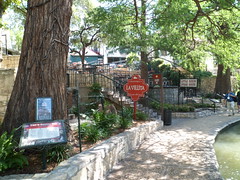 The two main squares were Plaza Nacional and Plaza Juarez.  A third plaza, named for the innovative mayor of San Antonio, Maury Maverick, was opened in 1968.

Slightly to the north and west, is Plaza Juarez.  One comes out of La Villita at Bowen’s Island.

This area was actually a peninsula in the San Antonio River, until the river was diverted in 1927. 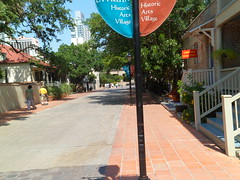 John Bowen settled here in 1845, and became San Antonio’s first postmaster.   Along with his family,he maintained a productive farm until his death in 1867.  After the passing of his widow, Mary Elizabeth, in 1903, the city planners took control of the land and eventually used it as a high-rise office park- so as to better compete with Houston and Dallas.  The river diversion made Bowen’s Island part and parcel of downtown San Antonio.  It still has a lovely flair to it, if you look away from the high rises and towards the river. 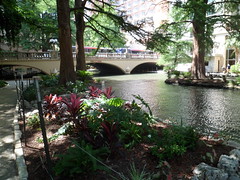 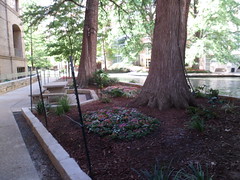 I left Riverwalk near the Spanish Governor’s Mansion, and turned to see San Antonio City Hall, well- adorned by live oak.  A statue of Sam Houston stands guard, in front of City Hall.

The Riverwalk continues on to King William Historic District- a journey for another day.  I was happy to get this overview of San Antonio’s core, and to spend an hour or so at:

Next:  Day 6, Part 4: The Spanish Governor’s Mansion and the Outlying Missions.