I hit a few internal speed bumps on this part of the trip.  Stopping at a motel, thirty miles outside of town, on Wednesday night, I encountered my first, and only, cockroaches- in the refrigerator, of all places.  Fortunately, I had my cooler for the food, and kept my smelly clothes and shoes out of harm’s way.  I let the owner know right away, the next morning, that I had killed 7 little scavengers that night.

The second bump was my own doing- forgetting that surface roads, along the Gulf, in Corpus, are TWO lanes each way, I gingerly started making a left turn from the inside lane, until screech-and-beep let me know I wasn’t alone.  Fortunately, there was no harm, unless the kid had a heart attack afterward.

As to the good parts of the morning, Corpus Christi has two standouts- the Gulf and Blucher Park.  This post focuses on the former, and on some of Corpus Christi’s finer downtown features.

The city honours its indigenous people, the Karankawa, with the name of its main north-south downtown  street:  Carancahua.  On this pleasant street is Czech-Mex Bakery, where I again indulged in kolache.  These were stuffed with apple, and were every bit as good as the ones in West, TX.  Czechs just take their baking seriously, as they should.

Here is the busy intro to Bayside- Corpus Christi is not on the open Gulf, but it’s close. 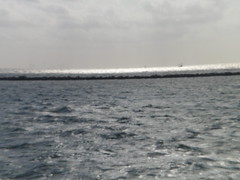 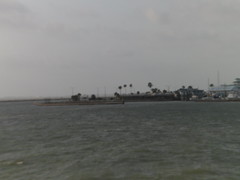 A permanent fixture here is the USS Lexington.  Along with Texas State Aquarium, the  UT Marine Science Institute and Texas Museum of Asian Cultures, this will be a major part of a more focused Corpus Christi visit.  Then, I would also spend two or three days on the main part of Padre Island. 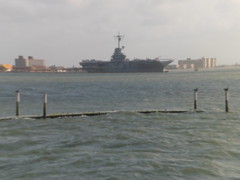 After disturbing the sea gulls and napping fishermen, with the click of my camera, I headed up hill to the downtown area.  Here are two notable houses of worship:  Corpus Christi Cathedral and St. Patrick’s Church, near Blucher Park.

The cathedral was built in 1940, to replace an older facility.  Some of the stone from the old building was reused here.  The land was donated by John G. Kenedy, a South Texas rancher who figures quite prominently in the history of Texas’ southeast.

St. Patrick’s is the home church of a Catholic school on Alameda Street.

After visiting the public library, to post my work for that Thursday, I happened by this delightful place for lunch. 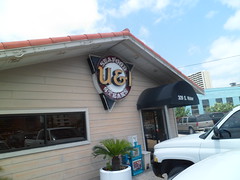 It seems all of north Bayside was here, but I had good service, and well-made seafood enchiladas, with okra soup, a generous side salad and fresh sourdough bread.  I hadn’t had sourdough east of the Pecos, until then.  It was just marvelous.

I know, I missed the statue of dear Selena.  I loved that girl, and will be here again.