There is something about an anchoring outpost, at the far end of any of the four directions, that continually fascinates.  People of all walks of life, ethniciities, orientations and creeds can appreciate the ambiance and raw challenge suggested by a human settlement  at the very edge of  a landmass, or even of a political unit.  Someone once posited, rather indelicately, that “Key West and Provincetown aren’t just for Gays anymore”.  True enough- a die-hard “straight” person like me would enjoy such places perfectly well.   I think my “gay” friends would agree.

The appeal is in the edge; but I digress.

Port Isabel lies at the southeast corner of the Texas mainland.  Though the small settlement of Boca Chica is just a tad further to the south and east, Port Isabel has the role of  welcoming anchor, with its lighthouse that once guided thousands of ships to safe harbour.   Today, “Isabel” is the gateway to the beaches and boat slips of South Padre Island.  Its school system serves island children, as well as its own.  The town has three museums, which complement one another and operate in unison.

Here are some views of this surprisingly complex town.

First, a look back towards South Padre Island.

Next, I visited the Port Isabel Lighthouse.  It’s no longer serving its original purpose, of course, but kids of all ages can challenge their acrophobia and claustrophobia by climbing up the narrow stairs, and cramming into the veritable crawlspace that is the tower.  It holds two adults at a time, comfortably.

Next, I walked over to the Port Isabel Historical Museum.  It  does a fine job of chronicling the cultural contributions, and relationships to the land, sea and river, of the Coahuiltecan indigenous people, of the Spanish, Tejano, and American settlers. This area was vital to the cotton trade, and as I’ve said before, the mercantile Tejanos of the lower Rio Grande Valley were more ferocious in defense of the Confederacy than even the cotton barons themselves. 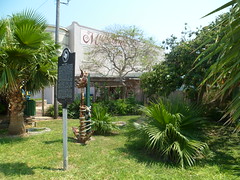 Here are a few shots of the Historical Museum, starting with the front garden.

Children of Victorian Port Isabel were taught the finer things of life.  Girls learned manners through play with intricately-made dolls.

Like any maritime community in North America, Port Isabel had ties to, and a fascination with, the culture of eastern Asia.

The last museum on this circuit is Treasures of the Gulf.  I took no photos inside, but the museum does have marvelous murals and artifacts of Spanish and Civil War Era shipwrecks, as well as hurricane memorabilia.  A Children’s Discovery Room will make this a great place for visiting families to beat the heat.

It was getting to be time to leave the Gulf region, so I headed up the Rio Grande Valley, past the farms and thriving communities of Cameron and Hidalgo Counties, to: