After shaving by using my side view mirror, and saying a few prayers, I left Lake Britton and had a decent breakfast at Fireside Village, in the small town of Hat Creek, CA.  The creek for which the town is named is an integral part of the Mount Lassen drainage area, as is Kings Creek.

I arrived in Mt. Lassen Volcanic National Park around 9:30 A.M. and spent six hours there, enjoying the contrasts- from lushness to austerity.

We are greeted almost immediately by the great peak, with plenty of the legacy of its 1915   eruptions, much in evidence.

I looked around Loomis Museum, which features a seismograph that records all tectonic activity in the area, with photographs taken by B.F. Loomis, right after the eruptions of May 19 and 22, 1915.  Comparative photos are also shown of the area, both before the eruptions and several years after.  It is noteworthy that Lassen Peak is the southernmost volcano in the Cascade Range, with the Sierra Nevada beginning closely to the south.

Not far from the museum is Manzanita Lake, which, along with the aforementioned creeks and other lakes to the north of Lassen, sustained several Native American tribes  in the area.  Native crafts are well-displayed in the museum, along with the story of Ishi, the purported last member of the Yahi Tribe, who lived west of Lassen Peak.

The forest has suffered this past summer, from lightning-caused fires.  There are several areas of the park that are still closed to the public, and fire crews were much in evidence along the main park road.  West and north of Summit Lake is the main hot spot area.

Still, the damage caused by rock and magma far surpassed that done by forest fire.  Here is a rock field, just east of the Manzanita Visitor Center.  There are four basic types of rock at Lassen:  Basalt, andesite, red dacite and gray dacite, (shown below).

Lassen Peak may be hiked, to a point within 1,200 feet of the summit.  After that point, the tuff underfoot becomes too treacherous, and is thus closed to hikers.

Several boulders are on display in the Devastation Area, site of the worst damage from the May 22, 1915 eruption.  Below is a red dacite specimen.

Below, is Kings Creek.

I spent an hour or so in the Summit Lake area, enjoying a light lunch and another beautiful lake.  An 11-mile hiking loop is available from Summit, on another visit. 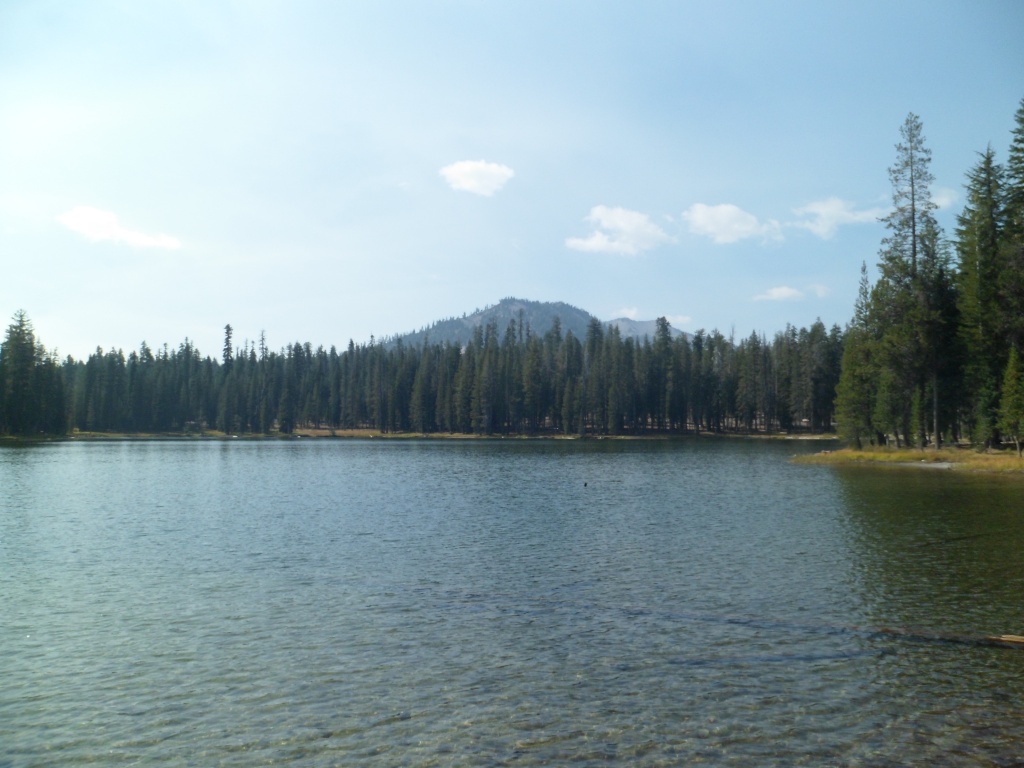 The piece de resistance, however, is an unexpected sight, with an even more unlikely name:  Bumpass Hell.  Kendall Bumpass, a cowpoke from Hat Creek, found this area of mud pots and boiling springs, which have an average temperature of 200 degrees Fahrehheit, in the 1890’s.  He lost his own left leg to an unstable patch of boiling soil.  Bumpass Hell is the largest of five hot spots in Lassen Volcanic National Park.

At the edge of heat and sulphur,  small plants, like this purple heather, thrive in patches, uptrail from Bumpass Hell.

I would spot more awe-inspiring scenes, beyond Lassen, in the Spanish Creek/Feather River Gorge area, north of Lake Tahoe, on the way to Reno, and another visit with my friends.

Lassen Volcanic National Park was the fourth California site to be designated a national park.  It remains among the most eclectic.