The two neighbourhoods which hug the northwest sector of the City of Boston, of the Charles River and its confluence with the Mystic River are also integral to the Freedom Trail and the story it tells of our nation’s beginnings.

The North End has become best known for its Italian culture, restaurants and shops.

Below are, in order of appearance, St. Leonard’s, St. Stephen’s and Sacred Heart. 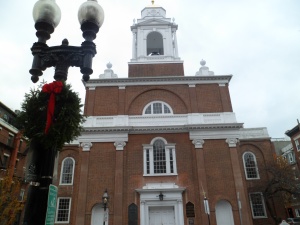 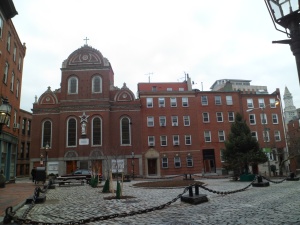 The unifying element in North End life, aside from the strong ethnic identity of many of its residents, is the legacy of Paul Revere.  He is best known as a benefactor of the Revolutionary cause and as the bell-ringer of Old North Church.  Longfellow’s poem and Copley’s portrait have made Revere one of the most famous Americans of the War for Independence and Federal period to have not served in either the military or national government.

Old North Church, Paul Revere House and Copp’s Hill Burial Ground are the three most prominent landmarks of the War for Independence in the North End.

Here is the  famous North End church of the Independence Era:  Old North. 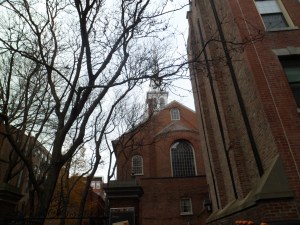 Paul Revere’s house is preserved by an historical trust.  It will seem familiar to the connoisseur of colonial New England architecture, as it was built by the same man who built Salem’s House of the Seven Gables:  Joseph Chandler.  He built residences with low ceilings, to preserve heat, in the harsh winters of pre-central heating Massachusetts.

Paul Revere, by profession, was a silversmith.  Silver being expensive, then as now, Revere also worked with copper and bronze, as well as with gold.  A bronze bell, cast by Revere for the Old North Church, was rung by him on that fateful night of April, 1775.  It now lies in the courtyard of his preserved home.

The last place I visited in the North End, before crossing the bridge into Charlestown, was Copp’s Hill Burial Ground.

Here are interred the good, the great and those of checkered repute, from Boston’s early days.  The patriot Robert  Newman, the abolitionist and educator Prince Hall and the early religious fundamentalist Mathers (Richard, his son Increase and grandson Cotton) are all laid to rest in this hallowed ground. 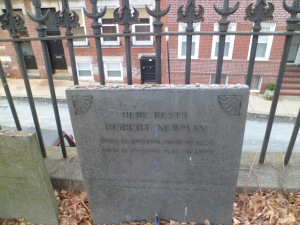 Having paid my respects to one and all, I gazed out upon the Charles River.

Tomorrow, I will recap my visit to Charlestown.  For now, I recall the words of the townies, to any young boy who hung around too long in a “Connah Stoah”, “Hey kid, go home and tell ya mutha she wants ya.” 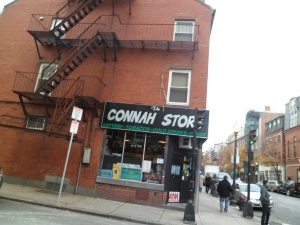