Once past East Entrance, the scenery changes dramatically.  Gone are the towering alpine peaks, the geysers, the lakes and the pristine meadows.  The Northern Absaroka and Washakie Wilderness areas are pure Great Basin:  Dry, spiky sandstone, reminiscent of the desert regions of other western states. 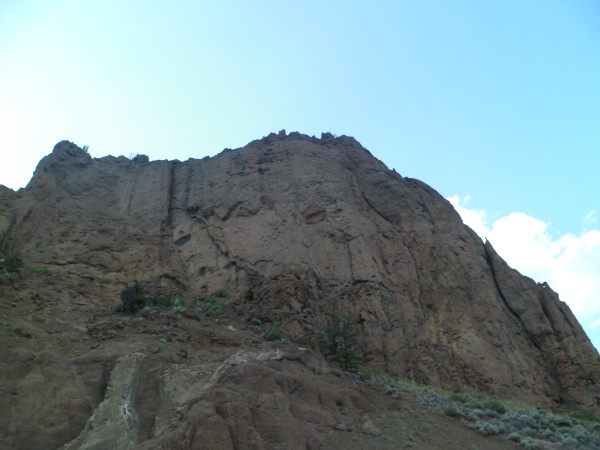 Closer to Buffalo Bill State Park, east of Wapiti, the Shoshone River is harnessed for the reservoir that is named for the famed scout and showman. Here are some scenes of this popular family camping and fishing spot, which is much greener than the rest of Washakie Wilderness Area.

Just north of the reservoir, the Northern Absaroka also sprouts a bit of green.

I felt a bit empty as I pulled into lively, bustling Cody.  Thinking it was just fatigue, I sat down and enjoyed a decent plate of three-cheese ravioli and salad at Adriano’s, served by a waitress and a food runner, both of whom were named Shannon.  Waitress Shannon was amazing, physically-challenged, yet more than holding her own in the very busy establishment.  Cody lives up to the standard one would expect of a town named for Buffalo Bill.

I kept on, into the night and across the grassland of the Greybull River Valley, before reaching the town of  that name.  Here, I found full campgrounds, but took a room at Wheel-in Motel, as I had to do laundry in the morning, anyway.

Next:  Austere Landscapes and Austerity of the Mind