The second half of my March 20 visit to San Diego’s Balboa Park was devoted entirely to nature, and Man’s interpretation of it.  Space and air are meant to be explored, now that we have a handle on virtually all of our planet’s land areas.  We must remember, though, that each of us remains free to explore this world, on a personal level.

I have been to Japanese-style gardens before.  This was my first visit, though, to the Japanese-American Friendship Garden, a work in progress that is an outgrowth of the Sister City relationship between San Diego and Yokohama.  I passed through the Ceremonial Gate, into an environment  far more serene than even the relatively calm streets of Balboa Park. 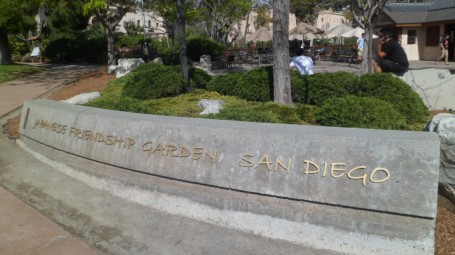 Upon entering, the first sight is of San-Kei-En Entrance Stone.  San-Kei-En is the name of a famous garden in Yokohama.  It means “Three Scene Garden”.  The three scenes are Water, Pastoral and Mountain. 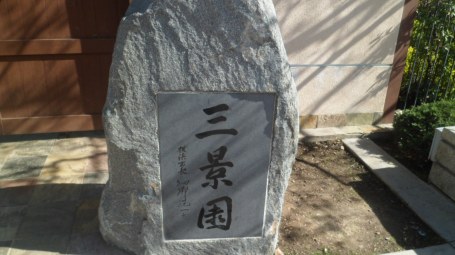 The water scene is exemplified by the koi ponds, and by two tools used by rural Japanese.

The first tool I came upon was shishi-odoshi, used for scaring off deer, which come into the gardens in search of food.

The second tool is tsukubai, used by visitors to a temple to purify themselves, before entering the temple.

Koi ponds always fascinate me, and the fish in this pond were curious and friendly.

Water is the key to the serenity of any garden.

The pastoral element is furnished by the cherry and other lowland blossoms, including chrysanthemum, which gave its name to the very throne of Japan’s emperors.

The mountain scene is exemplified by bonsai, the miniature versions of pine trees, by the Exhibit House, reminiscent of a rural Japanese inn and by the stone lanterns:  Oribe-doro and Light of Friendship.

Here is the Exhibit House, where Japanese ceramics and other cultural staples are on display.

Stained rocks lead one along a curved path, to the bonsai collection. 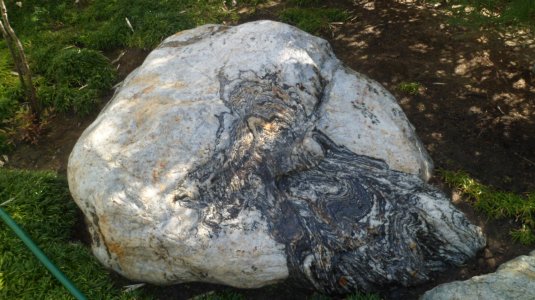 The stone lanterns are intended to light the traveler’s way, in peace and harmony.

A farewell of sorts is offered by the Light of Friendship.  Then again, it also serves as a greeting, depending on which direction one follows.

As I was headed towards Florida Canyon, I saw that there is much room for expansion of this magnificent garden.  I am sure to return when this area is cultivated, in the name of friendship.

Having felt the love of one of my favourite cities, it was nonetheless time to move on, and I did, to a fabulous meal and sweet live music at Carlsbad’s Mediterranean Cafe, followed by a rest at EconoLodge, my customary overnight stop in Carlsbad, unless it’s warm enough to sleep at the beach.

Next:  Dana Point, Doheny and The Loud Menagerie