June 17, 2014, Brussels- It might have been an omen, of sorts, but when I attempted to debark from the train at Brussels Central Station, I found myself being pushed back INTO the car, by a crowd of homebound commuters.  After about three minutes of this, a tall, big-boned French-speaking woman shouted “ARRET!”, and threw her arm in front of several of the people who were pushing, literally sweeping them aside, so that I might squeeze through.  This was, thankfully, the sole instance of crowd meanness I faced during my trip.  I was very thankful for her assistance.

The spire of Brussels Town Hall can be seen from the train station, making this navigation relatively easy.

My first impression of the structure was that it may have been the inspiration for the Belgian waffle.  St. Michael the Archangel stands atop the Guildhalls 8-12.

No one, including anyone on Google, seems to know whose statue is on top of the south guildhalls.  If I had used that much gold, I would know, believe me. 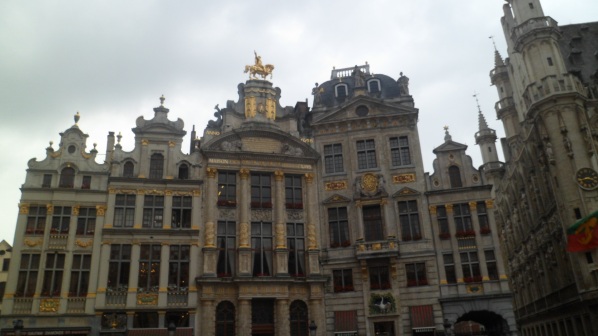 I was given three conflicting sets of directions from Grand Place to Hotel George V, which is in a rich and vibrant neighbourhood of Africans and Arabs, just west of downtown.  It was supposed to be “nearly impossible to find”.  Despite that mindset, I managed to find it, using a common thread in the three divergent sets of directions.  As I had to go back to the main street, Boulevard Anspach, to get cash to pay for the room, my navigation lesson was underscored.

I rested a bit, then went back to Place de la Bourse, for what was a topsy-turvy, but peaceful evening of celebration, first by some Algerians, then by Belgians, as Team Belgium came from behind to beat Algeria, 2-1.

The crowd gradually grew in size. 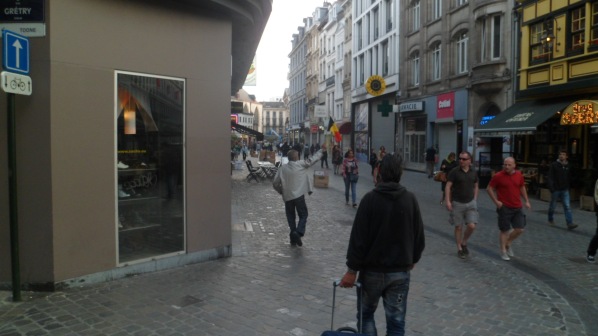 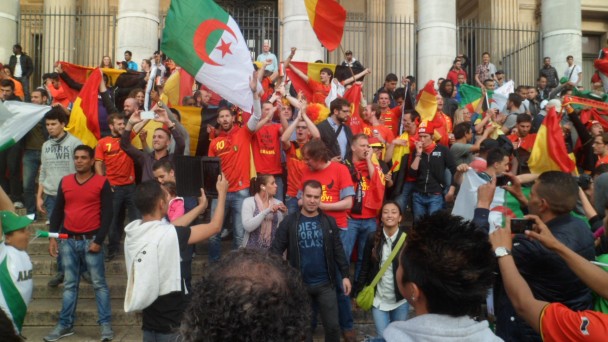 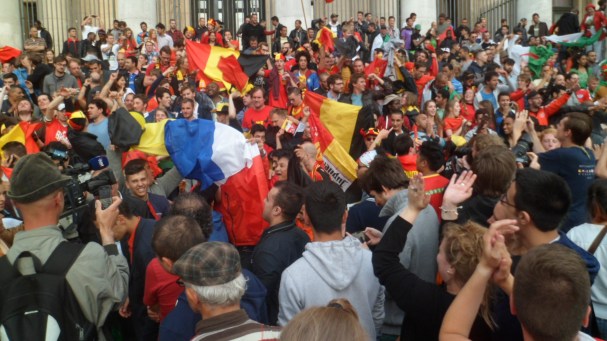 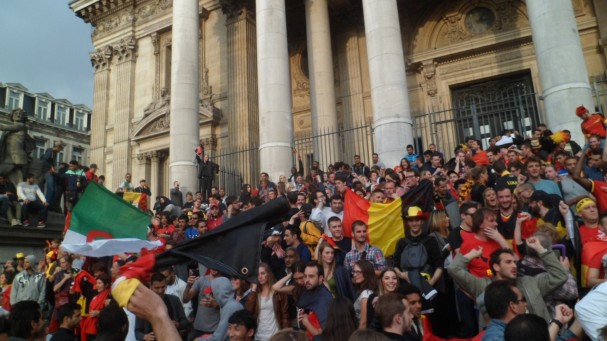 The crowd gradually dispersed, peacefully, into the surrounding neighbourhoods, and regrouped at their favourite bars and brasseries.  My favourite, Bella Pizzeria, is right up the street from Hotel George V, and is managed by a sweet and very helpful young couple from Corsica.  This was Rue Claire-Marie, en route from Place de la Bourse to my hotel. 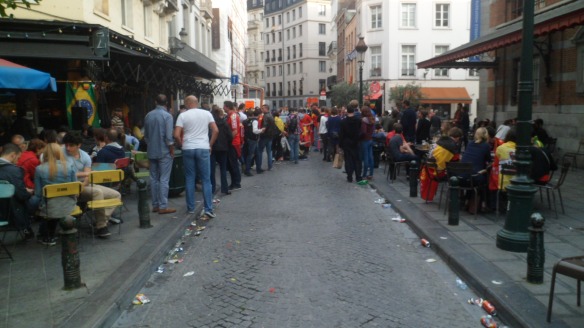 As it was, I felt it had been a full day, from Gravensteen to the World Cup celebrations, and so drifted back to the room and to sleep.

By the way, this is what the Bourse looks like, most of the time.