June 20, 2014, Bastogne- Of all the battles fought against the Nazis and their collaborators in World War II, none was more necessary, or difficult, than the Battle of the Ardennes.  Hitler was obsessed with the low mountains of eastern Belgium, and with Bastogne in particular.  It is said he visited the occupied town, at least once.

The Allied Forces liberated Bastogne, in November, 1944.  Less than a month later, the German Army struck back, as the tired Allies prepared to celebrate Christmas, and to send some troops to Paris for the holidays.  The German goal was to recapture Bastogne and Namur, and push up the Meuse Valley, clear to the Port of Antwerp.

At the eastern edge of the town of Bastogne, there is this homage to those who stopped that advance:

American and British forces, helped by Belgian partisans, kept the encircled Bastogne from being overrun.  This is the miracle of the “Battle of the Bulge”, and would be the final turning point in the defeat of the Nazi regime.

I walked the two kilometers to the Mardasson Memorial.  It honours those American troops who helped make real the response of General Anthony McAuliffe, to the German surrender ultimatum; “Nuts!”.  All fifty states, and all units involved in the defense of Bastogne, have their names engraved in this splendid memorial.  As it happened, I met a Mr. McAuliffe, of Massachusetts, and distantly-related to the general, who had been at the battle, serving with the 87th Infantry Division.  His story, and those of several men from Ohio, who were there during the siege as well, having served with the 101st Airborne Division, mightily augmented the awful beauty of this terrible, but ultimately blessed, series of events.

I present to you Mardasson Memorial:

There is a crypt, which, on the day I visited was closed to the public, which contains the remains of many who died in the days of the battle.  An American Cemetery nearby holds many others.  A German Cemetery is also nearby, underscoring that even those in service to the wicked are themselves viewed as worthy of respect, in death.  I stood at a bunker, from which American soldiers looked out at the encircling enemy troops.

On a clear day, one can see well into the Wiltz Valley of nearby Luxembourg.

Climbing to the top level of Mardasson Memorial, I could see still further. 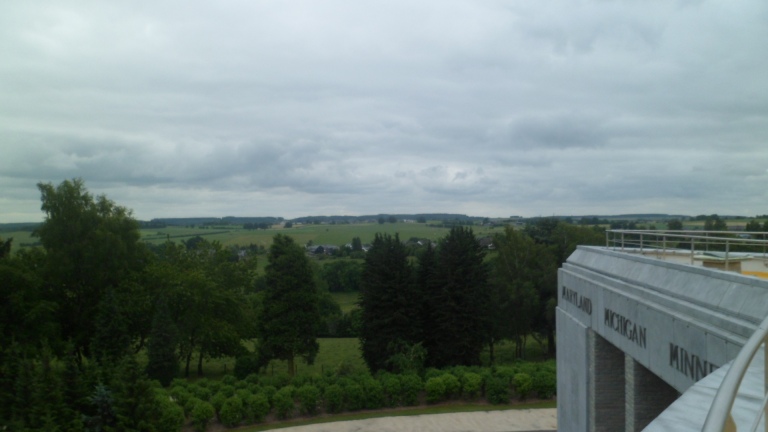 A detailed description of Mardasson is offered, in French. 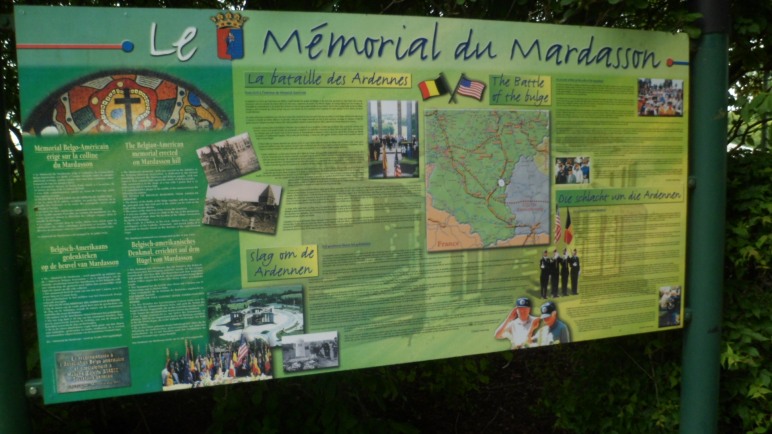 The memorial also offers a five-panel listing of the Divisions and Units involved in the successful defense of the town of Bastogne.  After reading several of those, it was time to visit the Bastogne Historical Center, or “War Museum”.

Each of us put on a headset, which described the events as recollected by those present, in our native language.  There were four accounts, dovetailing with each other, as we proceeded:  An American lieutenant, a German soldier, a Belgian teacher and one of her students.  They all ended up in the boy’s parents’ tavern.  The harrowing several days in that crowded safe haven, in the cold of winter, can not be minimized.  The German became a prisoner of the Americans, and told of having been treated with utmost respect and attention paid to his wounds.  The actual soldiers both revisited Bastogne a few times, with their families, after the war had ended. 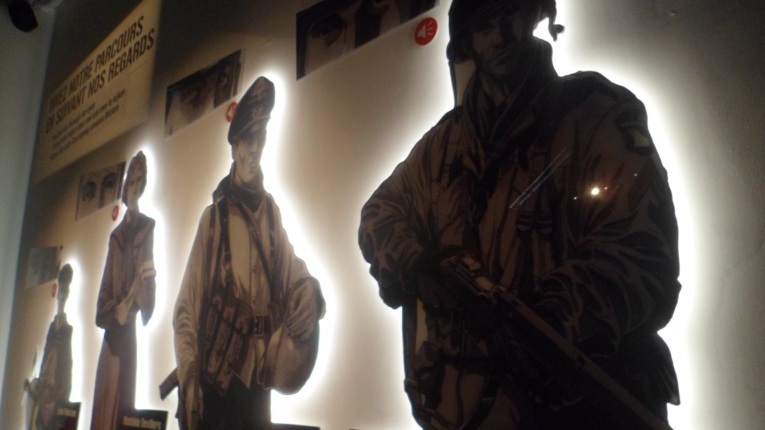 A Sherman tank is presented here as well.

Outside Mardasson, there are two small memorials to those who gave their all to the battle. This is the honouring of Combat Command B.

A second memorial honours Belgian Corporal Emile Cady, who gave his life in the initial defense of Bastogne, in 1940.

The spirit of both efforts is best exemplified by this sculpture, which honours the 101st Airborne Division, the Screaming Eagles.

Bastogne, and its determination to honour those who kept it safe, in the darkest days of war, are well-kept in mind, and well-worth visiting, to all who would recognize that “Freedom isn’t Free”.  My heart was touched by many experiences and people in Belgium.  I am glad, and blessed, for having been among the Flemish, the Walloons, and all those from other parts of the world who have found their way to this beautiful and time-tested crossroads. I walked back to Bastogne, collected my bags, enjoyed a late lunch, served by yet another lovely lady, and was guided to the “early” bus by a friendly, but intoxicated, Bastognais. It would soon be time to board the country bus, which would take me to Arlon, where I would board a train for the short ride to Luxembourg-Ville, and its National Day weekend. Thank you, Brugge, Ghent, Brussels- and Bastogne.  It was a pleasure.

7 thoughts on “An Eastward Homage, Day 25, Part I: Mardasson and the Seven Roads to Hell”