June 25, 2014, Heidelberg- It says quite a bit about a city, when one of its most celebrated citizens is a scientist and educator.  I decided to stop in Heidelberg, on the way from Strasbourg to Frankfurt, and spend time in the Universitat district.  Robert Bunsen, chemist and inventor, is the first prominent person identified with Heidelberg to be honoured with a statue. Although Ruprecht-Karls-Universitat was the first university in Germany, established in 1386, Dr. Bunsen,in his work at the University of Heidelberg, upgraded the institution to one of the top centers of scientific research in Europe.  Besides the Bunsen Burner, he achieved a wealth of success in electrolyte research, and in advancing the metallurgy of magnesium.  With Gustav Kirchhoff, he discovered cesium and rubidium. (Photo courtesy of de.academic.ru) 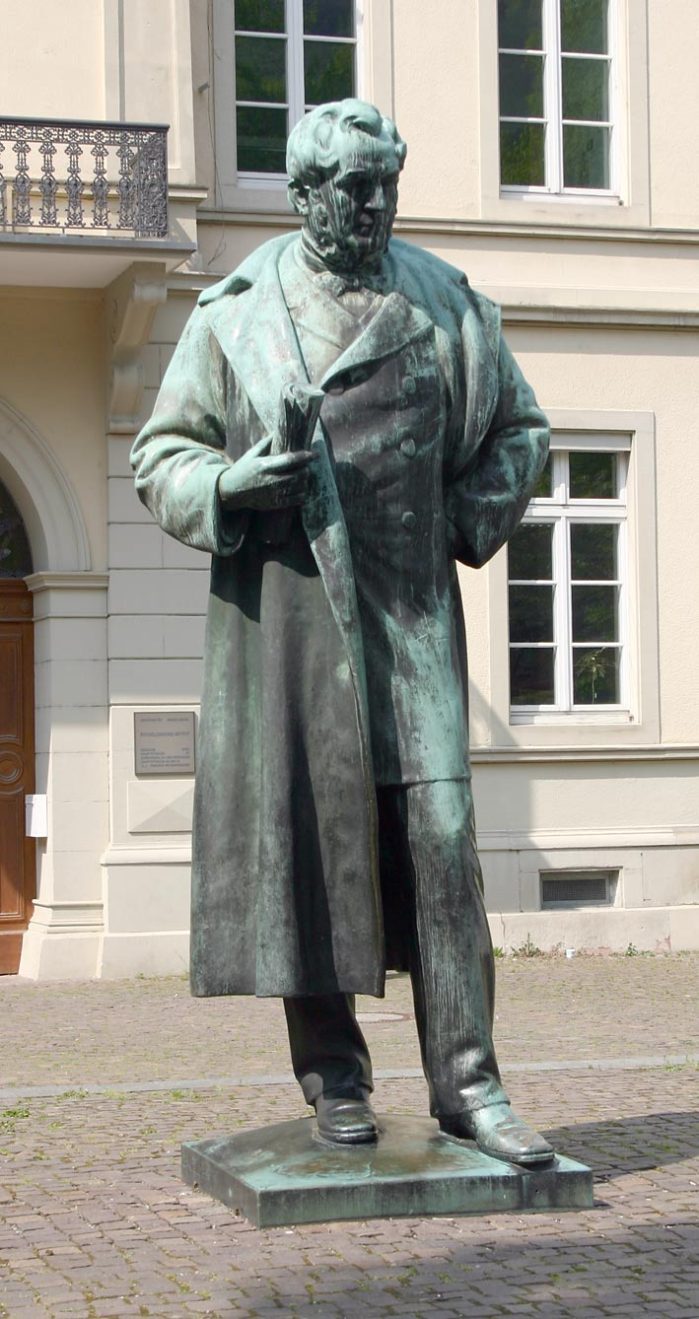 Today, the above statue faces the remaining hall of Ruprecht-Karls Universitat, also called Haus-zum-Riesen, still a center for Physical Sciences. (Photo courtesy of data: image/jpeg; base 64) 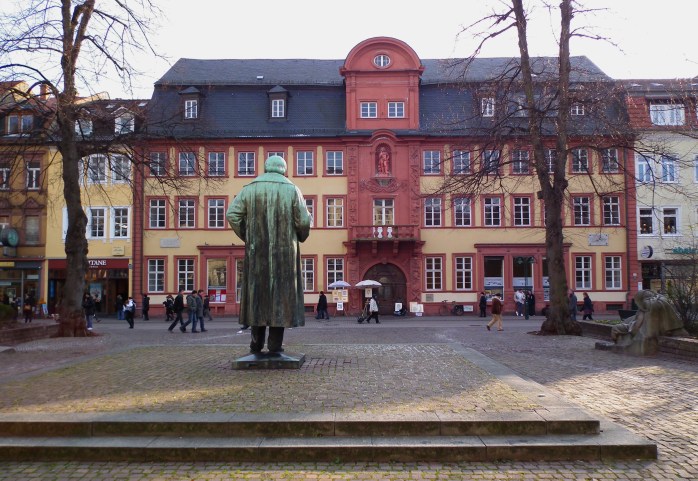 I debarked the train at Heidelberg Hauptbanhof, had lunch and gave myself three hours to meander around the university and walk a bit along the right bank of the Neckar River.  The train station is a fair distance from Altstadt, the Old City, with its narrow streets and energetic demeanor- which always comes with being near a university setting. So, I took the reliable and crowded, but pleasant, tram.

Here is the Hauptbanhof.  Although spare outside, I found it a relaxing enough place to enjoy a Wurttemburg-style bratwurst. (Photo courtesy of jaxstumpes.blogspot.com) 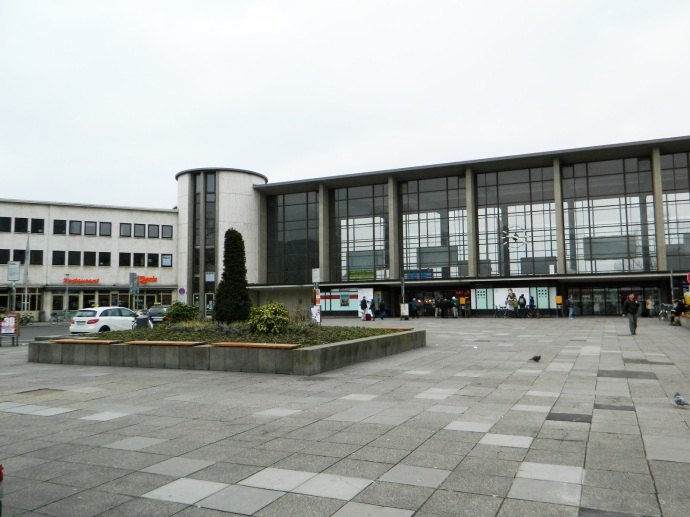 The tram deposits its passengers for Altstadt at Bismarckplatz. (Photo courtesy of stadtblatt-online, ww2.heidelberg.de) 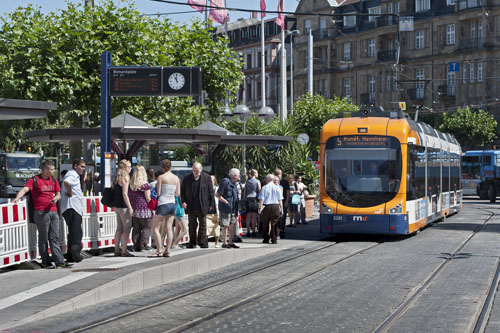 The old campus of the University of Heidelberg is just off the Universitatplatz, where a group of British school girls were fawning over a bearded twentysomething German student, by the fountain seen below.  Some things are just universal. (Photo courtesy of  www.globopix.de) 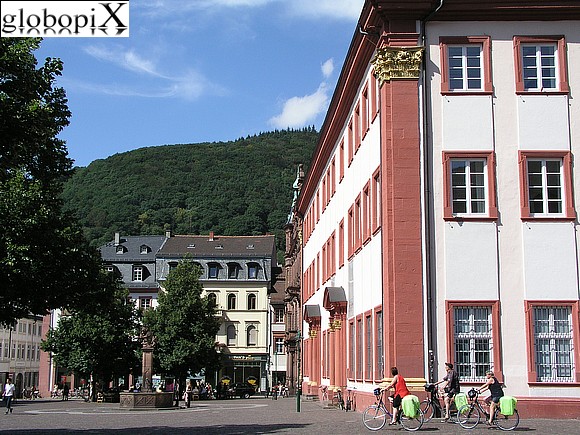 Here is another view of the main building of Alte Universitat. (Photo courtesy of data/image; base 64) 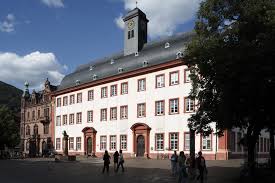 After World War II, American philanthropists helped establish Neue Universitat, with its emphasis on the Humanities and the School of Medicine. (Photo courtesy of sccs 10.uni-hd.de) 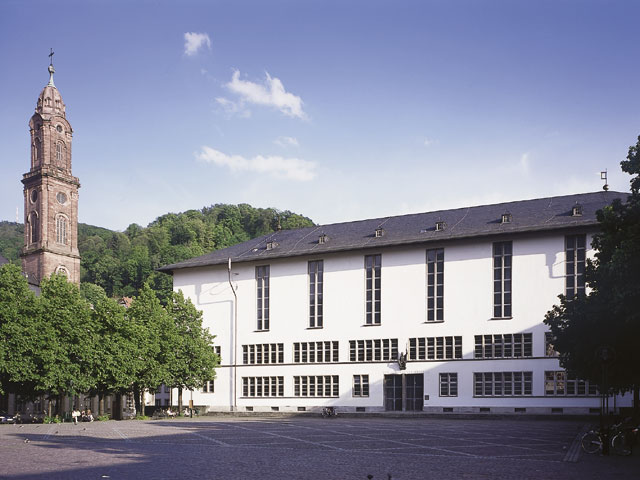 Other sites of interest in the immediate university campus are its Library, or Bibliothek, a beehive of activity on the day I was there.  That’s not surprising,as it was a Wednesday, and summer session finals week. (Photo courtesy of http://www.reisdit.no) 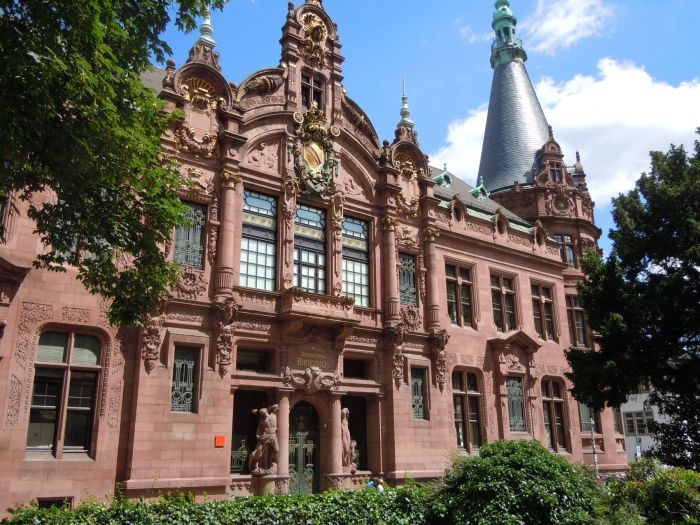 Studentenkarzer was the place where unruly students were sent, if convicted of an offense, by the Student Court.  Eventually, it became a farcical place, given to partying.  The practice of incarceration was transferred elsewhere, but the building is preserved, as a reminder of how things were done in the 14th-18th Centuries. (Photo courtesy of media-cdn.tripadvisor.com) 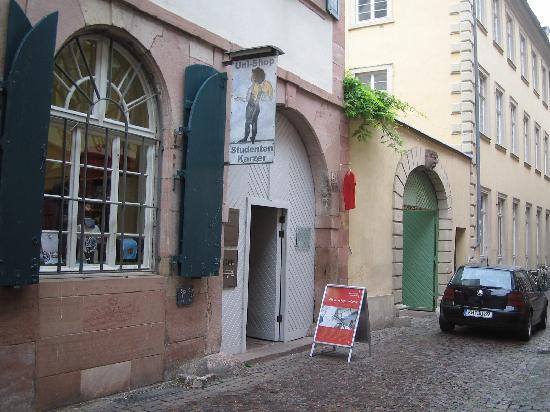 You can see just how punitive things turned out to be, in the long run. (Photo courtesy of http://www.travelswith divya.com)

Hexenturm, or the Witch’s Tower, is so-named to commemorate the cruelty of the Heidelberg Witch Trials of the Fifteenth Century.  It was originally used, however, to incarcerate thieves.  Part of the old wall of Heidelberg, it now stands on the grounds of Neue Universitat. (Photo courtesy of http://www.pausanio.de) 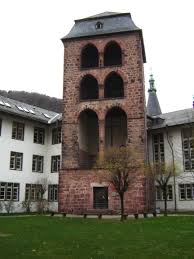 Heidelberg honours its lesser lights, as well.  One of these was Friedrich Ebert, the first President of Germany, under the Weimar Republic, from 1919-1925.  He ruled largely in an autocratic manner, with a fair amount of help from the military.  This may well have made it easier for Hitler to rise to power, but to Heidelberg, Ebert is still a native son.  His life’s work is still examined at the Ebert Memorial Institute, just west of the University. (Photo courtesy of ww2.heidelberg.de) 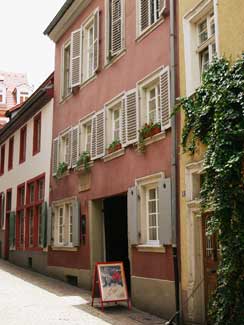 Now, let’s have a look at three churches of Heidelberg.  The first is a Catholic church, St. Anna, also west of campus.  It was originally a hospital. (Photo courtesy of http://www.commons.wikipedia.org) 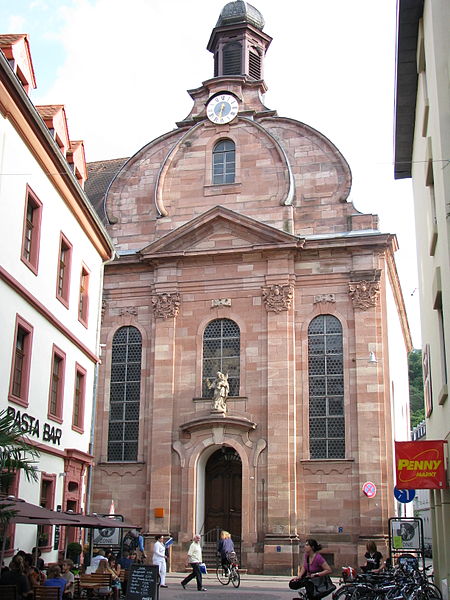 Somewhat larger, and to the south a bit, is Peterskirche, which is ecumenical.  This is the University Church, first built in 1192, even before the campus.  It was modernized in 1986. (Photo courtesy of ww2.heidelberg.de) 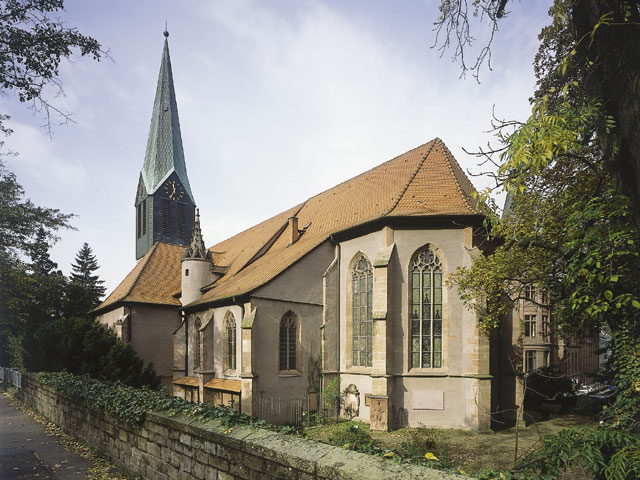 Below Photo courtesy of http://www.peterskirche.heidelberg.de) 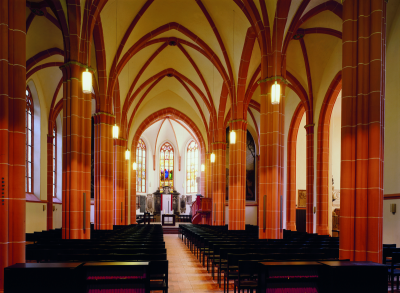 Thirdly, here is Jesuitenkirche, or Church of the Holy Spirit and St. Ignatius, in the heart of the university campus.  This is the largest Catholic parish church in Heidelberg. (Photo courtesy of data:image/jpeg base 64) 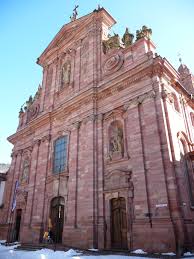 Time was getting short, as my train to Frankfurt would arrive soon.  I ended this all-too-brief excursion to this regal little city, with a nod to the barons of Heidelberg, and a view of Kongreshaus, overlooking the Neckar. (Photo courtesy of web02.city-map.de_)

The barons who lived in Heidelbergschloss, the great castle, which I am determined to visit three years hence, built Alte Brucke, the oldest standing bridge over the Neckar, in this area, in 1788.  It is actually the ninth such bridge built on this spot- the first having been built in the 13th Century.  To the right, one may gaze at the tower of the Rathaus, or Town Hall. (Photo courtesy of image 1.masterfile.com/em) 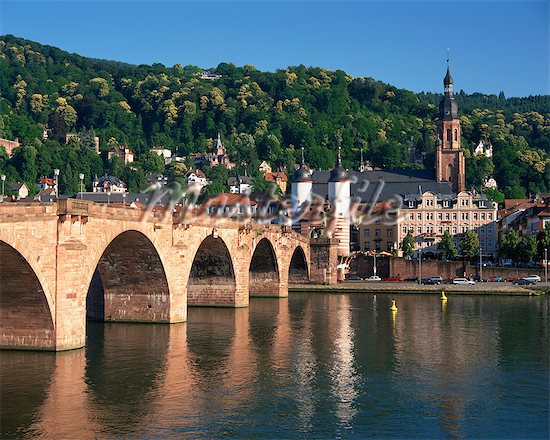 Frankfurt, the majestic Lord of the Main, has its share of iconic sites, but no place has anything on Heidelberg. I have the sense that I have only scratched the surface on the land of my maternal ancestors, anyway.

Next up:  Playgrounds Along the Main.

5 thoughts on “An Eastward Homage, Day 30: Of Barons and Bunsen”