June 28, 2014, Frankfurt-am-Main-  I awoke at 6 AM, on this bright Saturday morning.  PentaHotel has amazingly comfortable beds, and an exquisite breakfast buffet.  (There were all food groups, not just the breads and pastries you see here.) See, it’s not just Americans who like grand portions. 🙂  We could all learn to distribute food more equitably- and if there were these types of meals in small villages, around the globe, we’d feel better- though we’d also have to work harder to burn unwanted fat and excess calories. That work could be service-related, and we’d have a better world in that way, as well. (Photo courtesy of http://www.hotels.com) 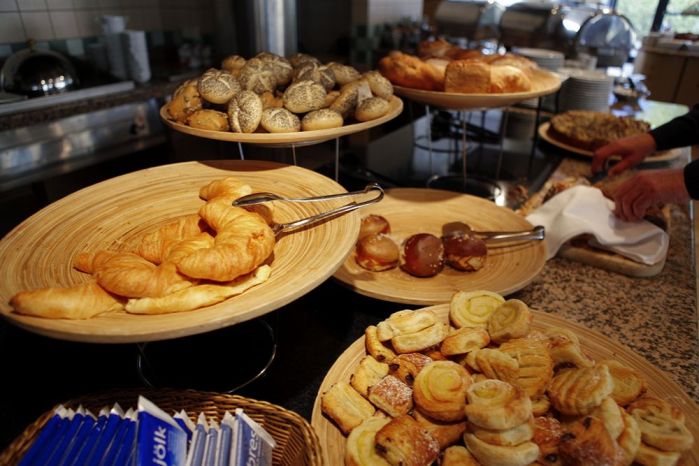 I left Gera, promptly at 9 AM.  The train to Frankfurt involved only one stop this time, at Erfurt.  It was, I’m told, a special Saturday train- not to be missed, without a penalty.  Ja,voll, Herr Kommandant!  So I made it back to Q Green Hotel, the first place I stayed in Europe, and was given a 6th Floor Suite, as a token of Melia Group’s appreciation.  For those who have forgotten, Q Green looks like this. (All remaining photos courtesy of ME!)

The rest of the day involved: No laundry (Launderettes in Germany close at 8 PM, Friday and reopen at 8 AM, Monday.);  a light meal at a kebab place, and a walk around the periphery of Frankfurt Messe.  This undertaking took me past a parade of Working Girls, up over a short Autobahn, through several deserted, but perfectly safe parking lots and along der Messe’s west side, where a couple of billboards in German, and in Portuguese, pierced the horizon.  I ended up in a familiar neighbourhood, with such streets as Funckstrasse to remind me of my locus.  Note: What looks like a B with a tail is really pronounced ss.

Once back at Q Green, I took in the rest of a World Cup match, and was actually happy when Germany took it all, a few days later.  The next day, Sunday, I would head for the airport and back to North America.

5 thoughts on “An Eastward Homage, Day 33: The Frankfurt Boomerang”