The day broke, cold but sunny, as twenty family members gathered, to say farewell to their mother figure, who had struggled, her last six years on Earth, to maintain a say in what went on with her life, and those of her beloved children and grandchildren.

Ruth Faust Fellman had to deal with her own failing health, thankfully being aided, day to day,  by a dedicated youngest daughter, a team of paraprofessionals and other family members as we were able to visit, at least now and then.

She left the struggle behind, in late October, with her spirit and her family waiting patiently, one more time, as this day of interment approached.  She will rest with her husband of 64 years, on both this earthly plane and in the spirit realm.  We who remain in the state of “waking”, physical activity know that truly being awake entails life far beyond what we know here.  “Bunny”, her husband (my father-in-law) and their oldest daughter (my wife) are watching us, and helping more than we sometimes realize.

After the Jewish burial service, we the mourners quickly parted company, all except me leaving Arlington, for their homes.  I stayed behind, with my flight back to Arizona not scheduled until tomorrow.  Dinner with a friend, in midtown Washington, would take up the slack, somewhat, and give me an excuse to spend at least a few hours in the nation’s capital.

My main reason for being here, though, was accomplished and Mom’s ninety-two years of service to family and community were suitably honoured.  The tombstone shown below will soon be replaced, by one that pays homage to both husband and wife. I will continue, as she admonished, to give back. 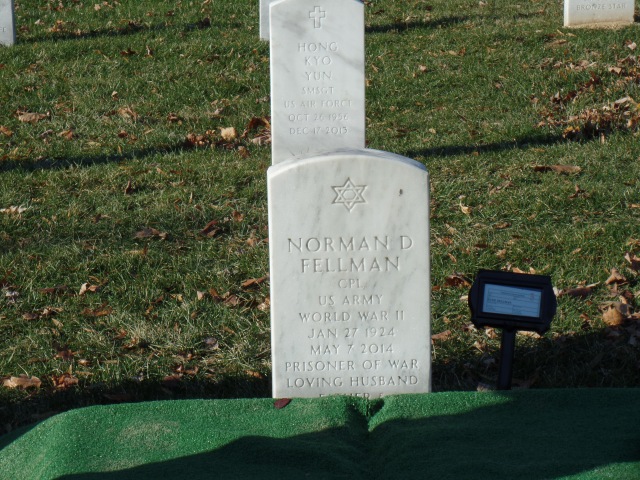 12 thoughts on “The Light Switches Channels”