I woke this morning, to find six inches of freshly-fallen snow covering the area outside my room at Delta Motel, Winslow.  It is a high desert community, and the residents were as surprised as I was, that the serenity brought by snow had descended upon their environs.  I’ve liked the Delta, for several years, because of its unpretentious yet immaculate rooms, a few of which had rockabilly themes, under a former owner.   The rooms now have a distinctly Southwestern flavour to them.

The snow did leave me to ponder the rest of my day.  Having said that I wanted to visit friends on the Hopi Nation, ninety minutes northeast of Winslow, I had to consider the weather and road conditions, plus the fact that I have to be in Phoenix, for an appointment, tomorrow morning. 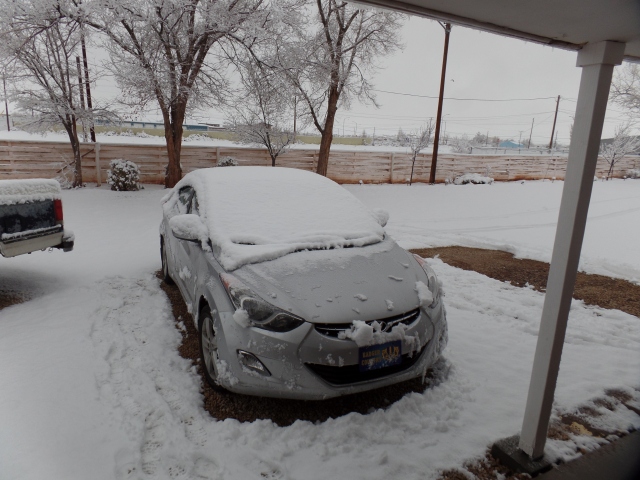 I opted to head for home, primarily because between Winslow and Prescott there lies high country, regardless of route.  There was poor reception for both phone and wifi, so discerning road conditions, later in the day, was problematic.   After breakfast, and wishing the caring and efficient motel staff a fine day, I filled my car’s tank at a station across the street.  Winslow is famous for  the late Glenn Frey’s reminiscence of a girl “slowing down to take a look” at him, whilst he was standing on a corner there.  It was rather ironic, that a sweet-faced young lady sat in her car and smilingly watched as I filled up the tank.  We never spoke, but her smile was a comfort.

I headed south, as she headed north, and found the road, to this little village on AZ Route 87, very well-plowed and free of ice.  This high country town has a small cafe- Tall Pines Cafe, named for the largest contiguous Ponderosa pine forest in North America.  Fresh chicken noodle soup and delectable quesadillas were my filling lunch.  The snow was as fresh here as it was in Winslow, and would cover the ground as far as 2/3 of the way down the rim to Camp Verde.

P.S.-The rest of the drive was uneventful, with bare ground from Camp Verde until I was just about back in Prescott.  I take comfort in that farmers will have a leg up, come spring, if the precipitation continues at the level it has fallen, thus far this winter.  I will make time to go up to Hopi, later in the Spring, and certainly at some points during Summer.

Nonetheless, surprises from the Universe are part of what keeps me going strong.

6 thoughts on “Surprises, Challenging and Delightful”