This ancient port has become, like many large cities across the globe, a place of high rise, high density apartment buildings and intense, often grid-locked, traffic.  Nowhere is this more clear than in the area called Marine City, close to the popular Haeundae Beach and Strip.

We used our God-given feet today, the final day of my entry into a Korean family.  Our foci were two:  Dongbaek,  site of the 2005 Convocation of the Asia-Pacific Economic Council and Haeundae itself.

The night before, shortly after our arrival back in Busan, we headed directly over to an older section of the city, to patronize a restaurant owned and operated by family friends, the Paks. 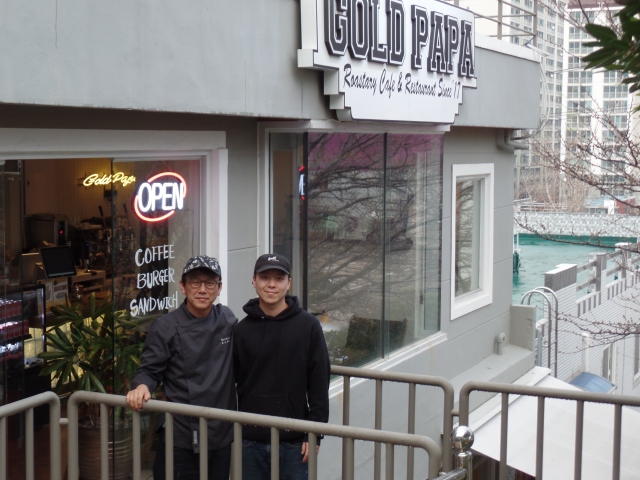 As the sign implies  it is a place for people to get a dose of quality American-style food.  The father and son also serve what I regard as the best coffee in Busan, if not in all Korea.  I was fortunate to have been given some, to bring back with me to the U.S.

Here is a view of Dongbaek, from Gwangan Pier, near Marine City.  Conversely, once at Dongbaek, we had a fine view of Gwanggalli Bridge. It is said to rival the Golden Gate and George Washington Bridges, when lit up at night. 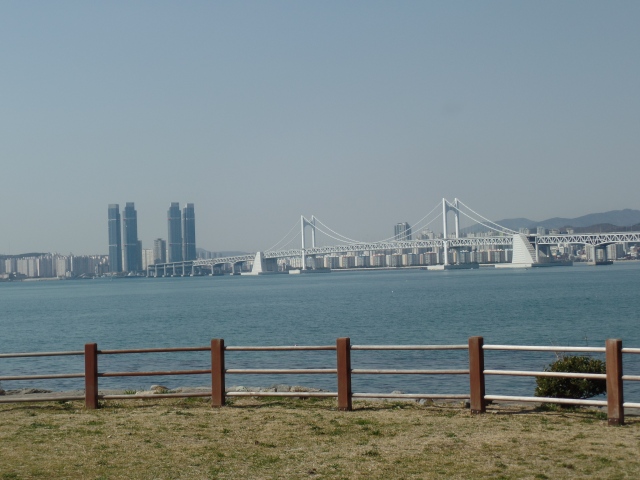 We spent several minutes looking at the APEC House, site of the aforementioned conference.  We joined a group of visitors from west Africa, on this fine morning. 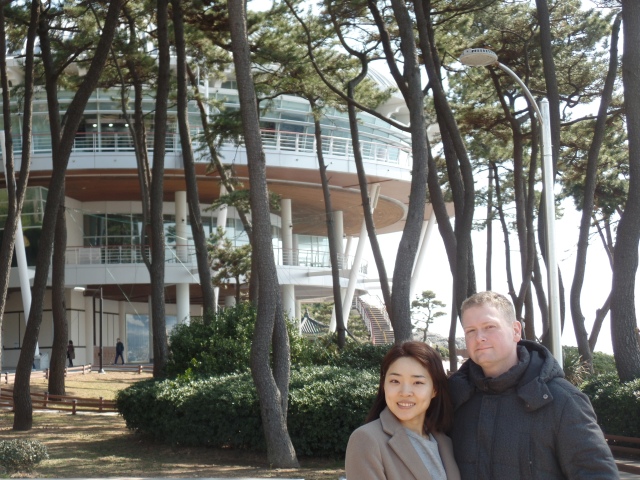 Below is a fine view of the traditional pavilion and of Dongbaek Lighthouse. 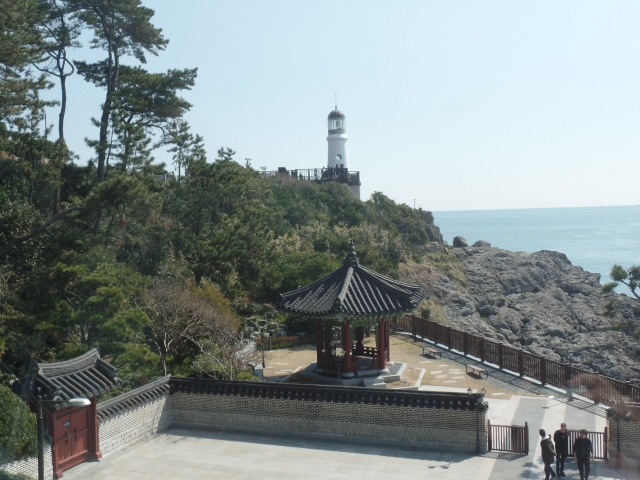 This mural of a Korean country scene greets visitors to APEC House.  I refrained from photographing the auditorium, to protect the privacy of a young Korean family, who were making a detailed visit to the conference center. 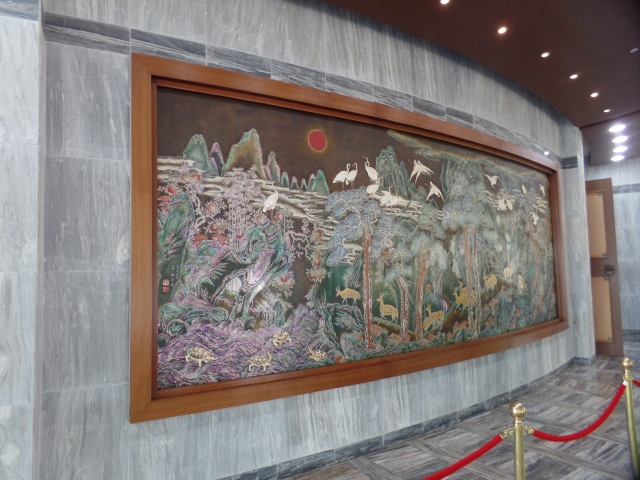 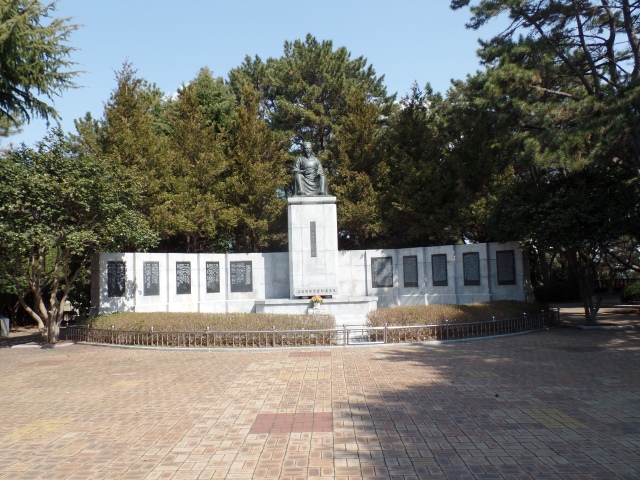 Above, is a statue of Choi Chi-won, regarded as the first great Korean advocate of Confucian teachings and etiquette.  He lived during the Silla Dynasty, in the Tenth Century A.D.  Below, is a shrine to the great teacher.  At the summit of Dongbaek, it is a serene place, most of the time. We were there only briefly, as an older man started to pester us.

Here is a view of Dongbaek’s southern tip. 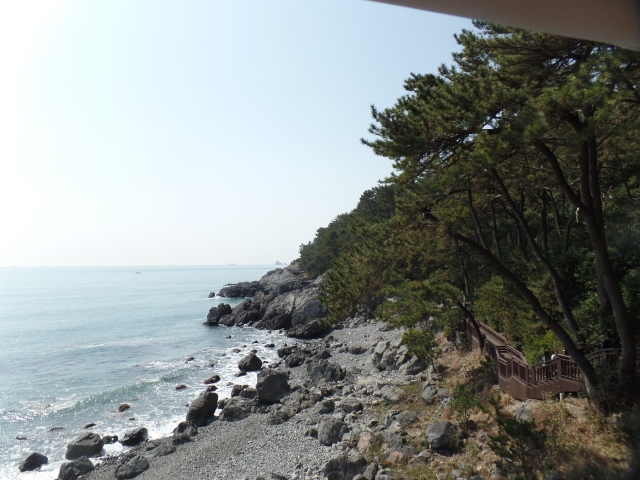 This Mermaid Statue commemorates the legend of a princess from a foreign land, who pined away for her homeland, day and night. 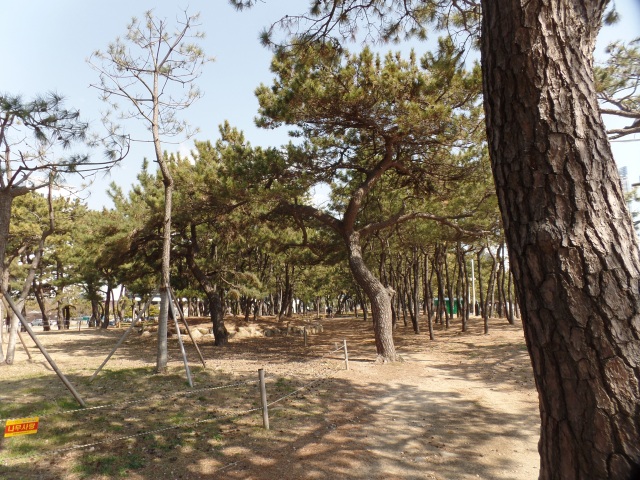 Modern Korean etiquette eschews photography of people, without their consent.  I was able to catch a glimpse of Haeunedae Beach, sans bathers.

Rabbits are seen as good fortune, as well as being symbols of fecundity. 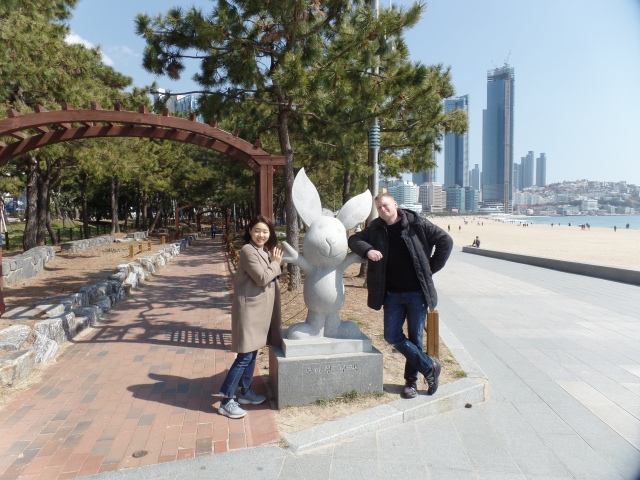 Here is the southeastern edge of Haeundae Strip, a bustling commercial tourist area, where we had lunch.  Looking for a chicken restaurant, we found they open at 2 p.m., which is averse to my schedule. So, we settled for more burgers-at one of  the ubiquitous Hello, Patty cafes.  The people in this photo shrugged their shoulders at being photographed, so no harm, no foul.

With that my time in Korea is drawing to a close.  My time as a member of a gregarious extended family is, however, just beginning.

NEXT:  Further reflections on Korea-and the trip back to Arizona

2 thoughts on “Busan’s Magnetic Side”