When I set out this morning, from Blythe, I half-expected to see nothing but clouds and moisture, once past the San Gabriels and Mt. San Jacinto.  Neither happened, and while a few clouds sent sprinkles our way, here and there, the weather was cool but pleasant.

With a friend in Riverside County at work and not available to visit, I headed for Old Town Temecula, a place I’ve found off-putting in the past, due to the invariably high volume of traffic spilling onto the I-15 freeway.

The half-mile or so, of preserved and reconstructed buildings gives a trendy air to the historic ambiance of Old Town. It’s not Bisbee, or even Virginia City, but Temecula has charm in abundance.  There is an abundance of wineries in the area, for those so inclined.

I am strictly a coffee/tea person, so my refreshment stop was at Press On, a crowded, happy shop, in the midst of Old Town’s Front Street. The shop is on the left side of the photo below. 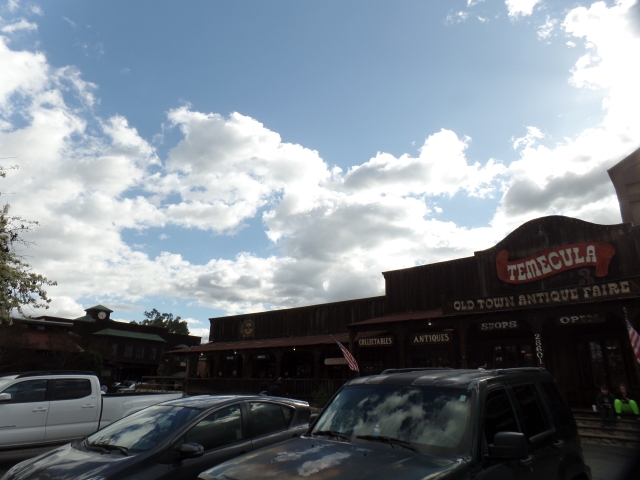 Temecula’s history is shown in a mural, two frames of which are shown below. 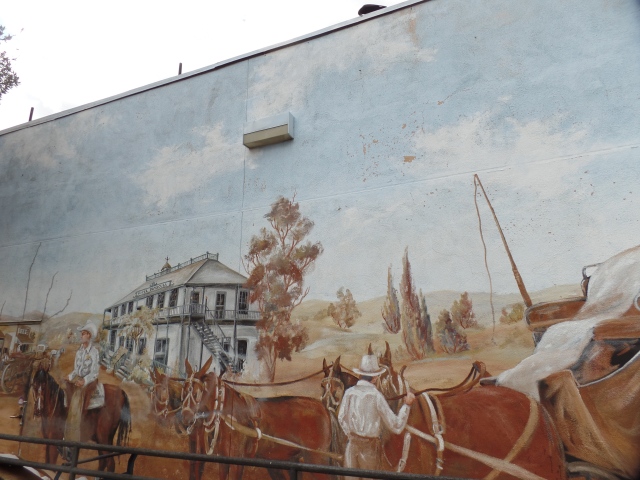 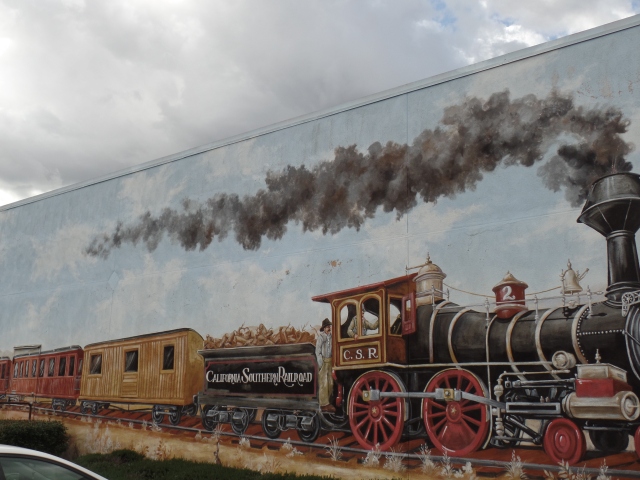 Here are some other scenes of Old Town. 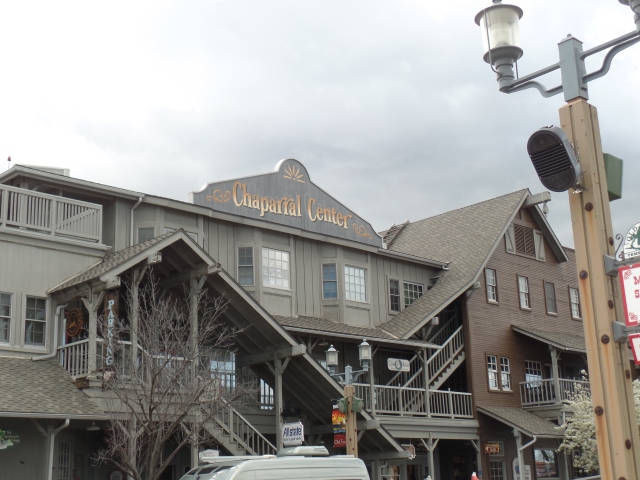 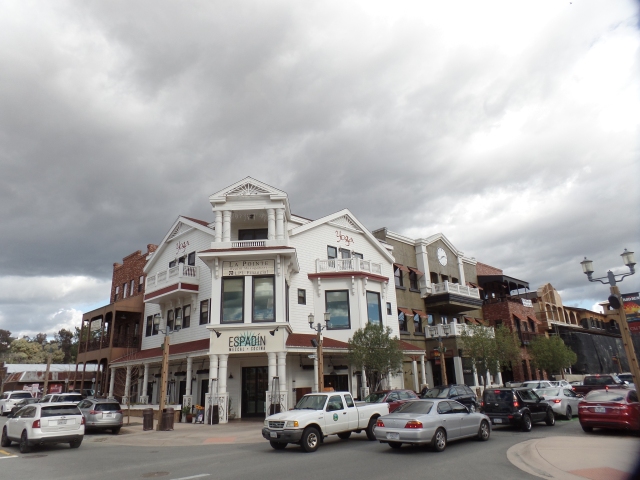 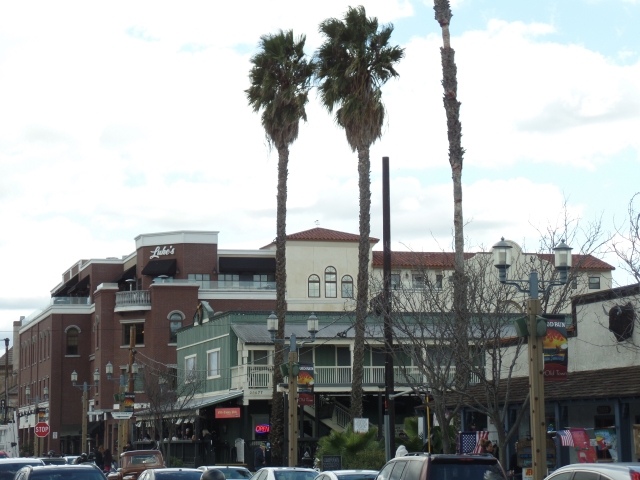 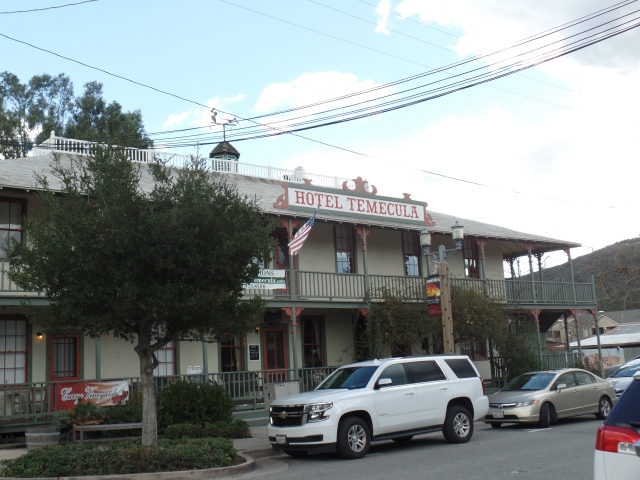 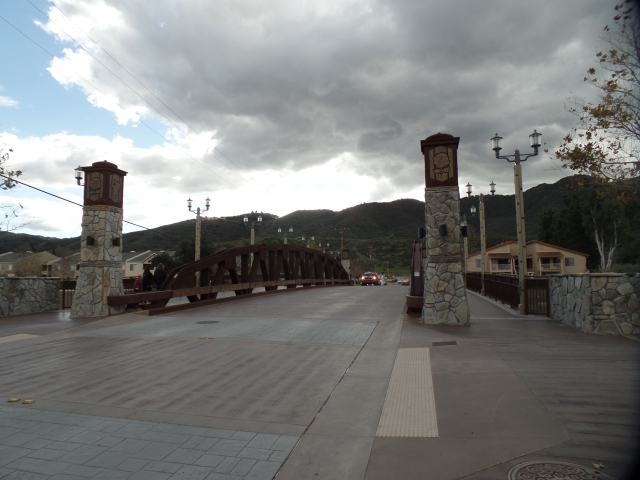 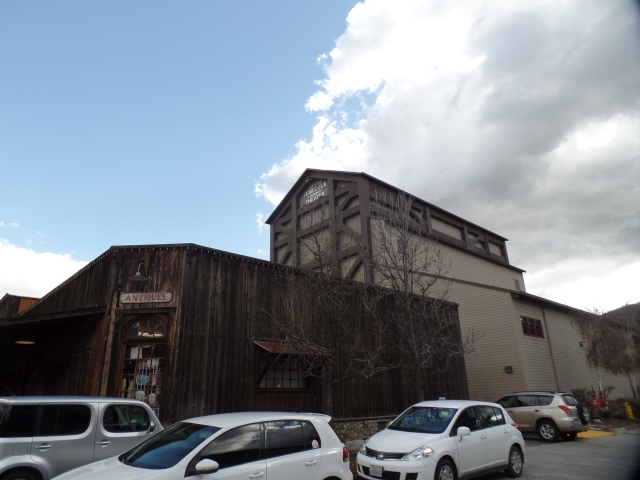 Temecula’s City Hall is quite impressive.  The water in the front fountain is not frozen, despite its appearance. It didn’t get quite that cold today. 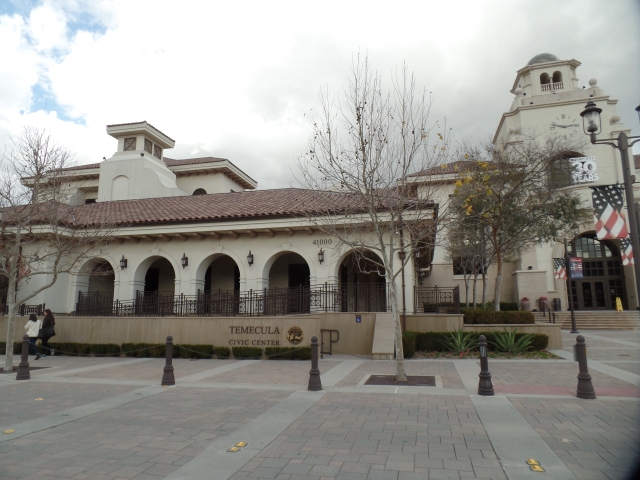 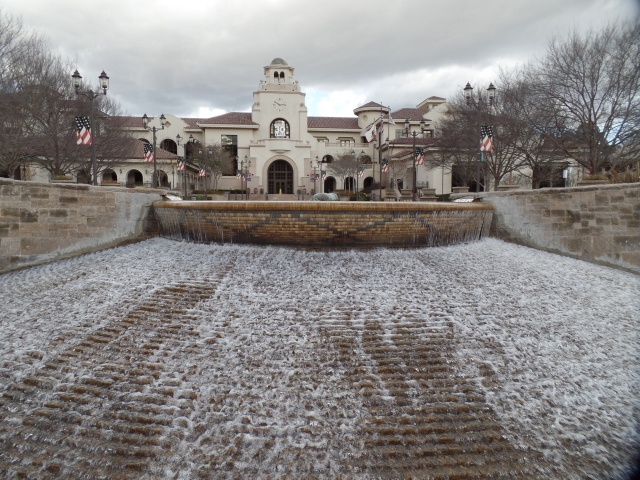 Humour, of course, helped people get along in the most rambunctious of times. 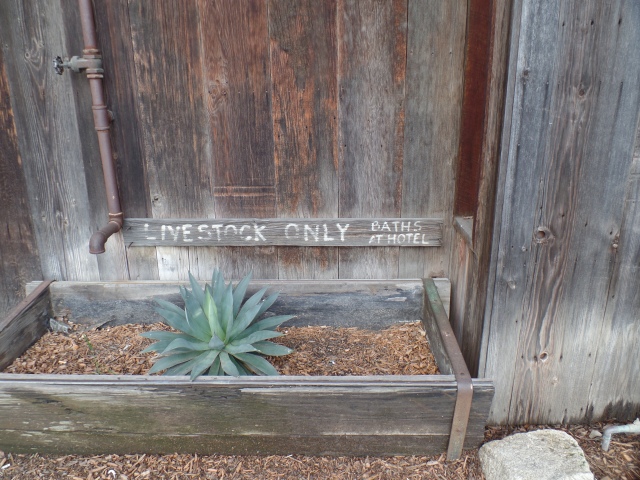 Thus invigorated, I headed towards San Diego, for a bit of reminiscence.  On the way, I encountered a vehicle darting diagonally across I-215, between Temecula and Escondido.  The driver managed to stop the vehicle and set it aright, on the grass shoulder of the highway, just shy of a very steep ravine.  I hope to never see such a thing again, but who can say what frights await, in the days and years ahead?

In San Diego, I spent some time at Tuna Harbor, part of the city’s wondrous shoreline and a monument to the civilian fishermen who served as lookouts for the Coast Guard, keeping an eye out for Japanese naval forays, during World War II.  Here, I had a nice,cheap seafood meal, at Marion’s, and caught these lovely sunset views. 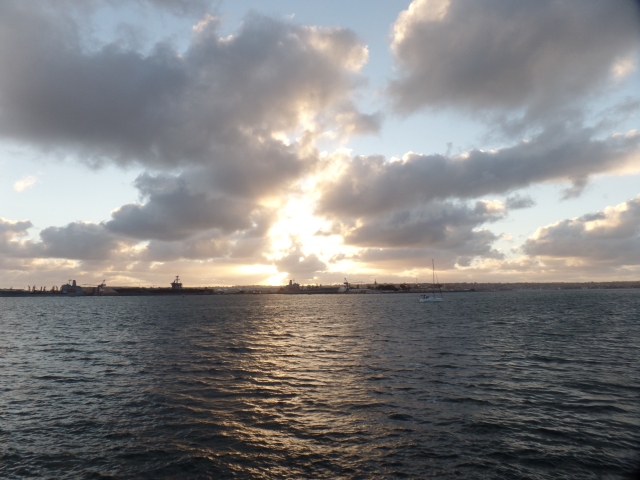 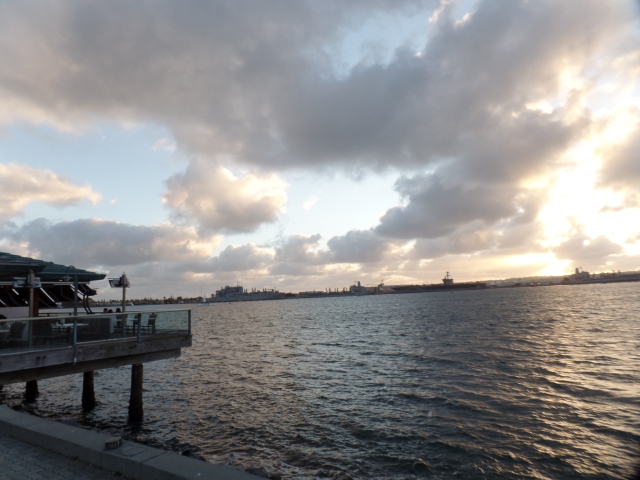 It is a great evening, in a very homey city. I will head north, to Carlsbad, for a night’s rest.  Then, will come a couple of visits with friends, in two very different parts of SoCal, tomorrow. Hopefully, the weather will hold up. 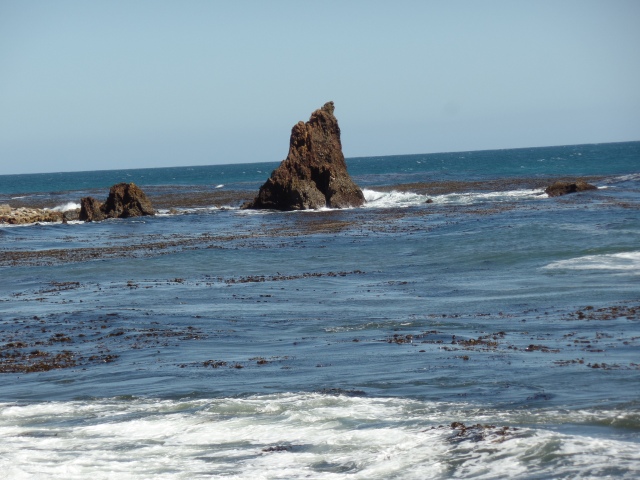 Since first visiting Palos Verdes Peninsula, west of Los Angeles, a couple of years ago, I have wanted to go back and actually walk a bit, from one of the overlooks, down to the beach and back.  This afternoon, I chose the southern end of the peninsula, at Point Vicente, to make that hike.

The Point Vicente area is the site of a U. S. Coast Guard lighthouse, one of three in southern California- the others being at Point Loma, in San Diego, and at Point Conception, between Santa Barbara and Santa Maria.  As an active Coast Guard facility, it is off limits to visitors, save for a few hours on a certain day of the week.  This was not that certain day. 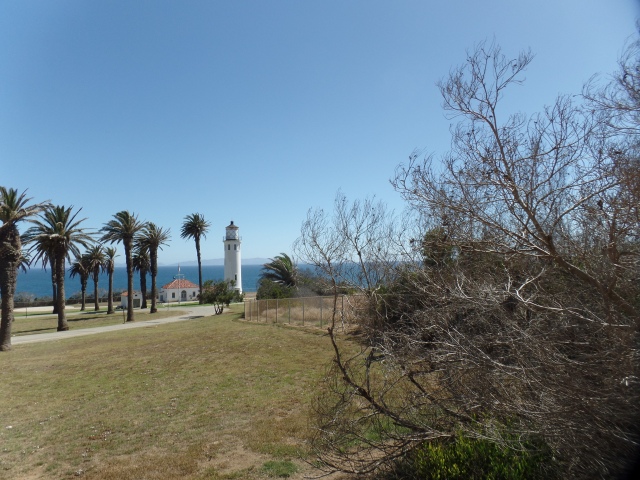 Point Vicente does have a lovely Interpretive Center, operated by the City of Rancho Palos Verdes.  The small museum, focusing on marine mammals and other aquatic life, is supplemented by a crew of docent volunteers. 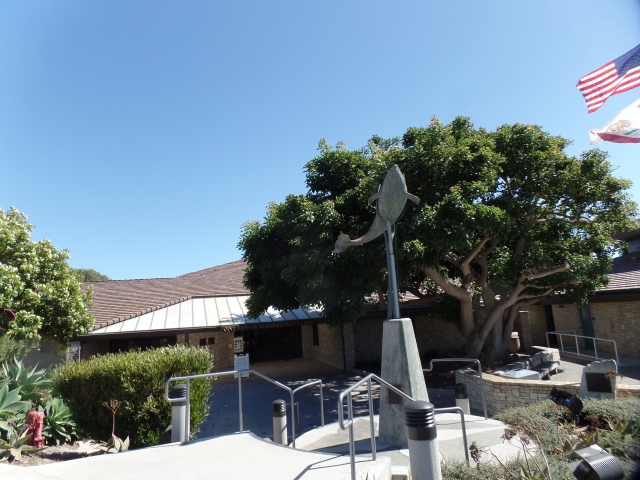 There is also a spacious viewing platform, with a particularly fine view, today at least, of Santa Catalina. 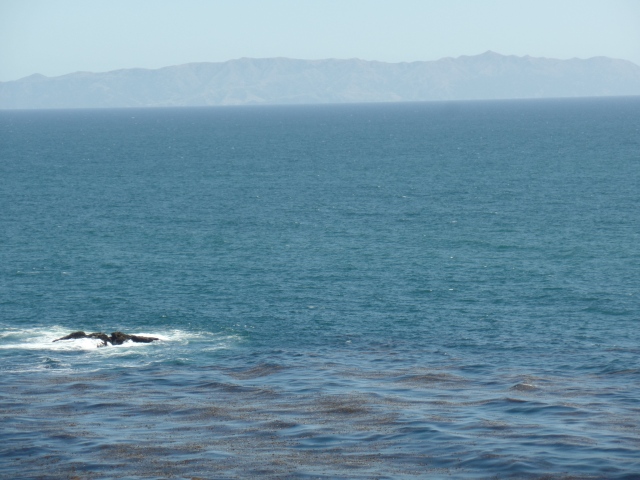 In between the platform and the island, however, there is much to hold a visitor’s attention.  Beach plum is as plentiful here, as it used to be at the beaches of Massachusetts, when I was a kid. 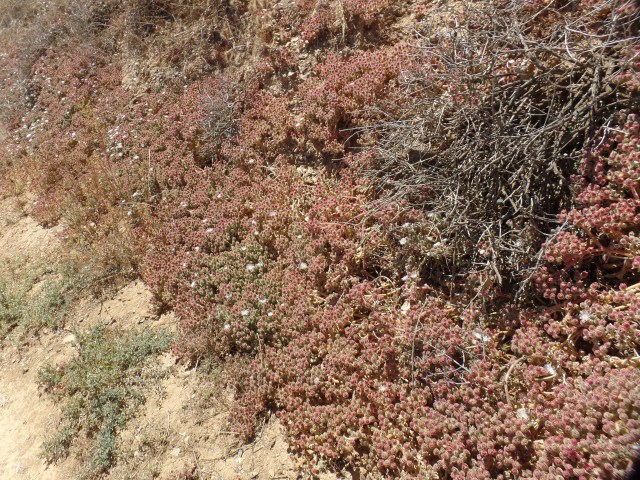 Once down to the narrow beach, it is possible to walk for about 1/4 mile, before a field of boulders renders the walk questionable, at least in the eyes of locals. 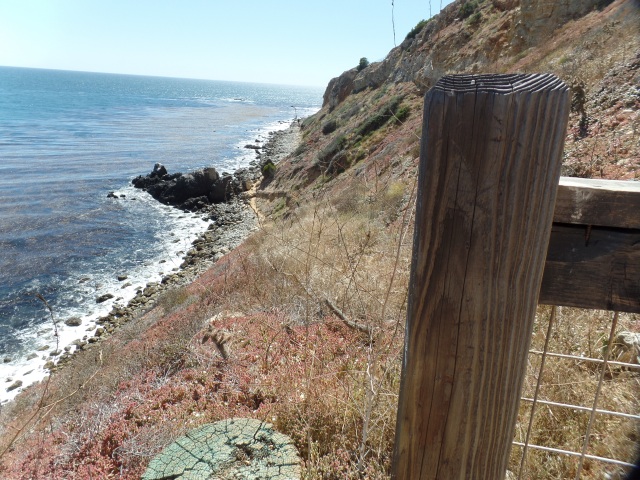 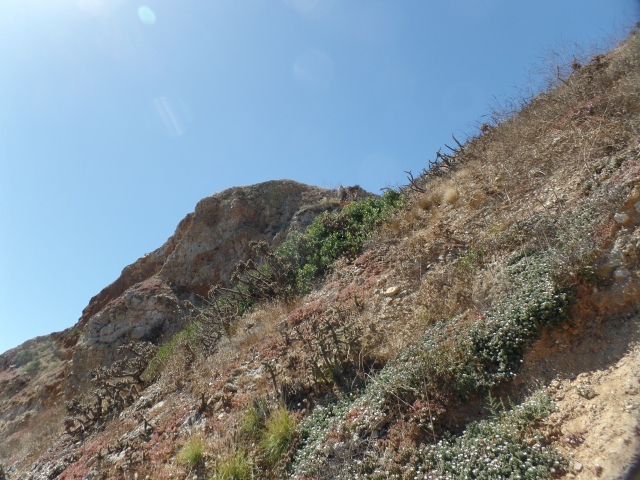 Small rocks jut out of the open water, as they do all along the Pacific Coast, the result of continuous volcanic activity, over the eons.

Kelp is also plentiful, though the mollusks which feed on it are much rarer in southern California than they were, even ten years ago. 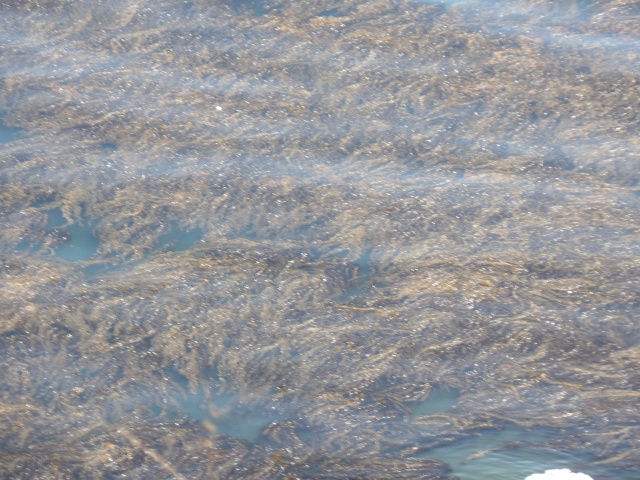 The rock below gave me the sense of a stranded turtle, looking seaward. 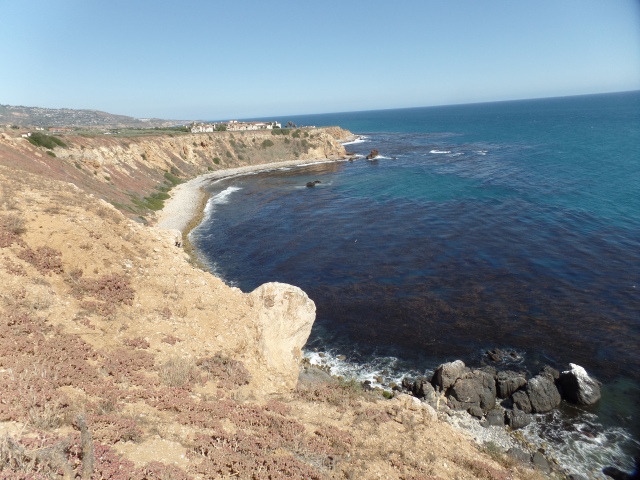 Flowering plants, like these daisies, always seem to find a niche, whether on the shore or in the desert. 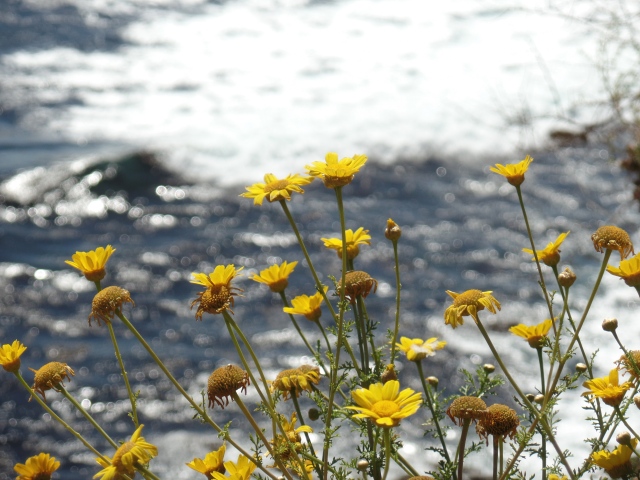 I could not remember whether these are hydrangea or Oregon grape. 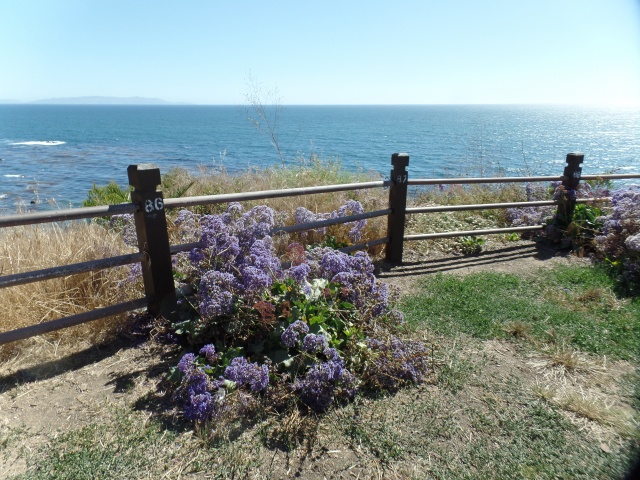 Palos Verdes’ trail system is also part of the California Coastal Trail, which “when completed” will provide access to 1200 miles of California shore line, from San Ysidro to the Oregon state line- after which, of course, the Oregon Coast Trail takes over, clear to Astoria.  I’m not getting any bright ideas, mind you, though there were four middle-aged people who made the trek from Crescent City to San Ysidro, in 2003.  The Trump Corporation has even granted an easement across its National Golf Course, south of Point Vicente.

Point Vicente, by the way, got its hybrid name from Captain George Vancouver, after his friend, Friar Vicente, when his ship rounded the peninsula, in 1790.   The connection, then, is with Mission San Buenaventura, some 92 miles to the north northwest.

A good day’s exploration done, I called it a rest, and headed southward, arriving here at San Onofre State Beach, a bit after 7 PM.  Tomorrow will bring a more sanguine visit with a friend of several years and a bit of collecting ocean water.