July 22, 2015, Santa Barbara- Mission Santa Barbara is the sixth  California mission I have visited, and only the second I have visited twice, along with San Diego de Alcala.  The first time scarcely counts, though, as the interior had closed.  The same is true of Mission San Luis Obispo de Tolosa, which was about to close when we got there, in 1997.

Yet, let’s get back to the splendidly restored Santa Barbara, “Queen of the Missions”, and another erstwhile casualty of the earthquake of 1925.  The community knew only one thing to do, afterwards, and that was to rebuild. 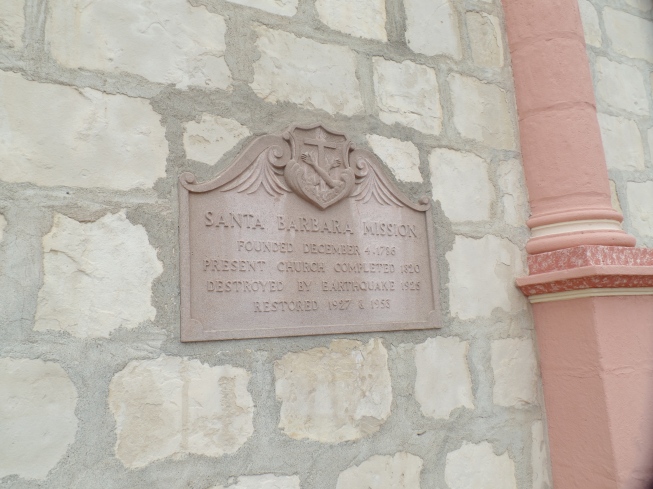 Even with its modern ambiance, Mission Santa Barbara exudes a strong spirituality, especially in its courtyard garden. 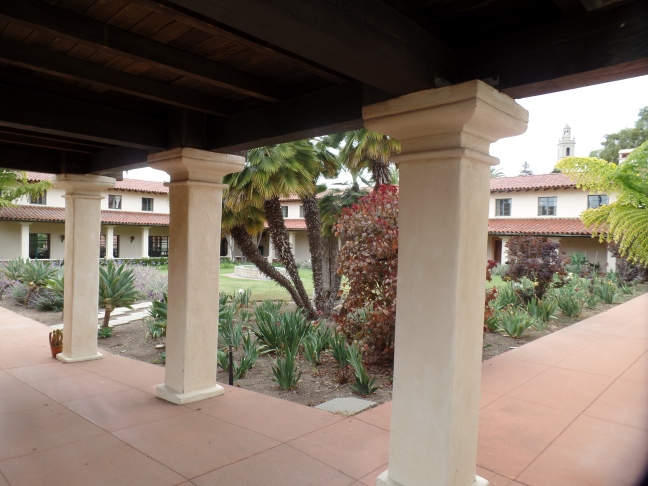 The Tower at Pisa has nothing on this olive tree.

This garden font was operating on trickle mode, enough to show the tenacity of the “Queen”, whilst also showing sensitivity to the overall situation in the State of California. 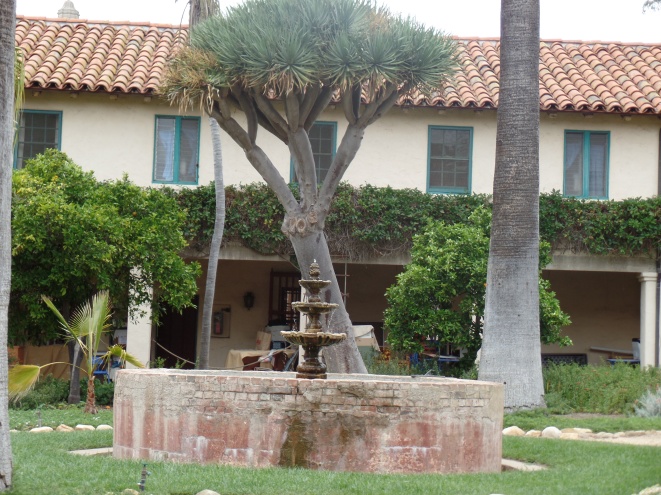 This Mission is one of several which has one public entrance, through the gift shop, where a cashier collects the $8 fee (for adults, 18-64).  The restoration work has all come from visitors’ fees, so they’ve been put to good use. 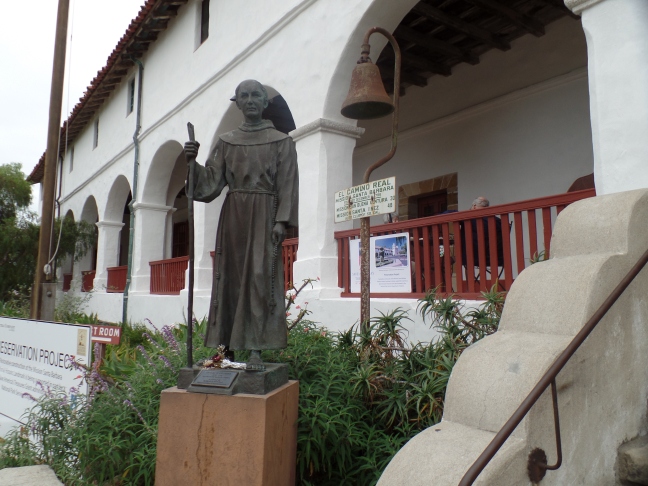 The bell tower, and much of the northern section of the Mission, are off limits to visitors.

As with other Spanish colonial structures, the walkways are shored up by exposed beams, in the ceilings.

Various small chapels are dedicated to Mother and Child, throughout the periphery of the Mission Church. 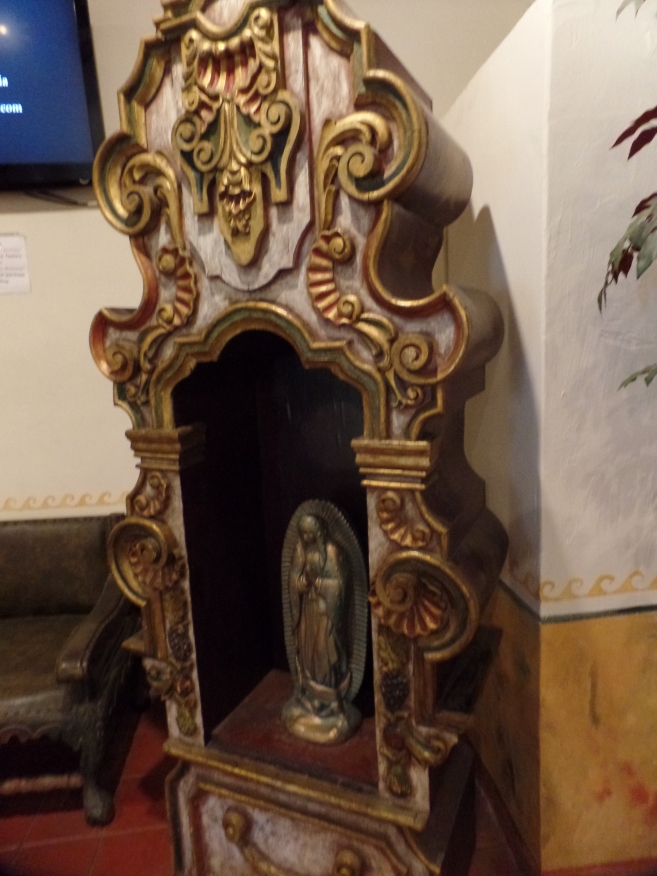 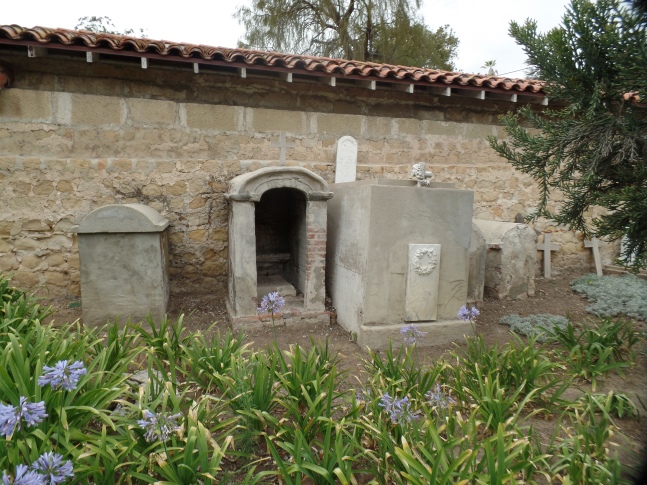 The doorway to the Mission Church is guarded by three skulls, so as to prevent malevolence from entering the sanctuary.

Silence is maintained here, as the church is an active parish’s place of worship, first and foremost.

The framed flat column is a unique feature of Mission Santa Barbara.  At least, I’ve not seen it in any other missions.  It is intended as a place to make offerings.

Chumash art is found throughout the Mission, as well.  This chandelier anchor also guards against demons. 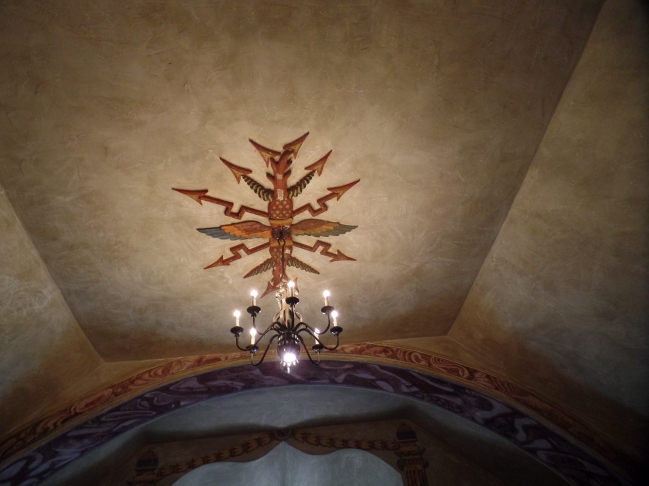 The Chumash are among the first Indigenous nations to share their painting skills with Europeans.

In the museum rooms, details of daily mission life are made clear.  This is a depiction of the friary kitchen.  It reminds me of its counterpart at Mission San Luis, in Tallahassee. 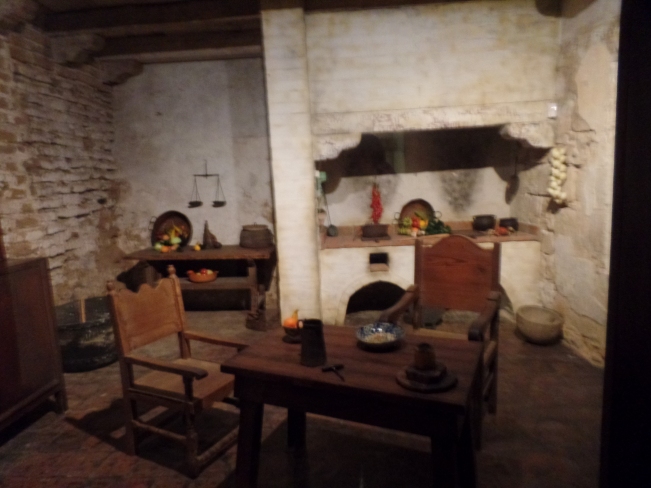 Between the Mission Church and the museum, Christ is depicted as a man of strength and courage, comforting Mary Magdalene.

This aqueduct was the place where Chumash workers would bathe, and wash their garments.

Although La Huerta, the signature garden of Mission Santa Barbara, was off-limits, the Olive Trail Garden, as well as the Courtyard Garden shown aforehand, were open to visitors. I have become quite enamored of anything bright red, on this trip.

It was hot, being mid-afternoon, so I bid farewell to the Queen of Missions, with a nod to its place in the skyline.

Thus, my northward journey to the south-facing coastline began to wind down.  Eastward ho!  I drove to Santa Clarita, the recently incorporated (1987) conglomeration of San Fernando Valley communities, due east of Santa Barbara, and opted for the familiar format of Chili’s,in the Newhall section, as a dinner venue, foregoing a brief plan to head into the Saugus section of town, for a meal at Los Angeles County’s oldest restaurant.  It was getting too late,but next time out- Saugus, CA will be on the itinerary.

A few hours later, via Palmdale and Victorville, I made my evening destination of Barstow.  Motel 66 is a clean and eminently affordable Mom & Pop west side establishment, and I don’t need anything more. Tomorrow, I will head back to home base, through the familiar Mohave Desert and uplands of Yavapai County.