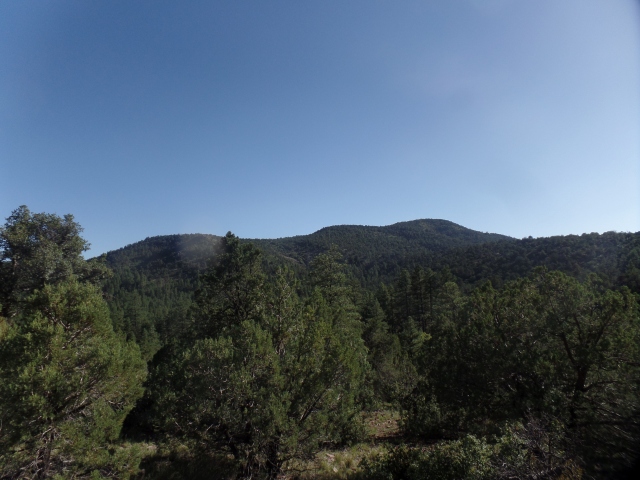 September 4, 2016, Walnut Creek, AZ-  This settlement is only intermittently populated, when researchers from Arizona’s public universities, and Prescott College, show up to conduct their monitoring of the high desert’s overall health, in an area far from any permanent, sizable human community.  A few ranches break the landscape and, indeed, one of those ranches, just west of Juniper Mesa’s main trailhead, is sealed off from anyone not associated with its operation.

I came out here, in mid-afternoon, to explore the sky island known as Juniper Mesa.  The place was, in the 1870’s and 80’s, a military encampment, an extension of Prescott’s Fort Whipple.  It was, to the cavalrymen of the time, the perfect spot for a railway station, with the route commencing in Prescott, going through Del Rio (now Chino Valley) and pushing clear to the Colorado River, at Hardyville (now Bullhead City) and, from there, to San Pedro, one of the ports serving Los Angeles.  The railroad was built, but it went north, to Ash Fork, then to Seligman and Kingman, connecting with a much larger, transcontinental track, the Santa Fe.

So, Juniper Mesa has reverted to a lonesomeness.  I was the only person on the trail today.  Fortunately, I have come to expect that, even in areas closer to Prescott.  The large pack, with an ample water supply, a first aid kit, two knives, a detailed topographic map and a sturdy flashlight, along with one of my trusty walking sticks, has been an integral part of my communes with nature.  What has occasionally caused chuckles, from the smug hipsters doing lakeside botanical and entomological research in Prescott’s city parks, is, to me, a must on any hike lasting more than an hour.  Besides, it wasn’t too long ago, that one of those individuals had to be rescued from Watson Lake Park, a ten-minute walk from a North Prescott business district, because she was dehydrated and delirious.

I saw fairly fresh horse-hoof prints, along the way and smelled fresh bobcat urine, trail side, closer to evening, but it was the insects and I who had the place to ourselves, from all outward seeming.  Juniper Mesa could be for lovers, but so far, it is for the soloists.

I used three trails, in the course of my loop hike:  Oaks and Willows; Juniper Mesa (rim)  and the steep Bull Spring Trail.  Oaks and Willows meets Walnut Creek Road (County Road 125), proceeds through the lush George Wood Canyon to the top of Juniper Mesa, then branches off to the northeast.

Here are some scenes of Oaks and Willows. 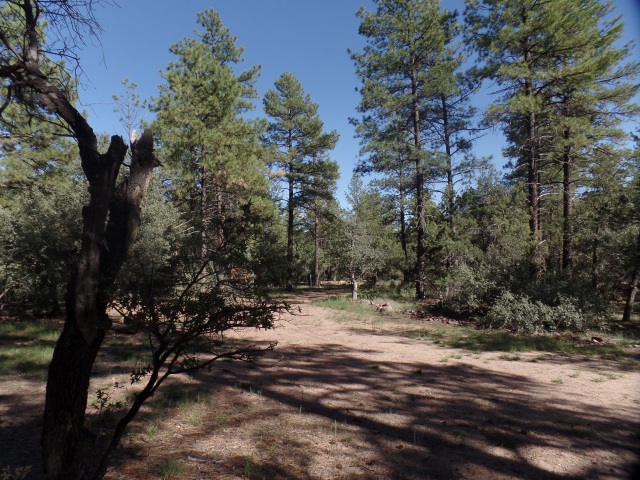 Broad trail, along the Oaks and Willows, Juniper Mesa

Once atop the mesa, I basically followed Juniper Mesa Rim Trail, though finding it rather sparse, in several places.  Horse trails, though, are easy to identify by their indentation into the ground.

Alligator Juniper, top of Juniper Mesa.  I almost see a parrot’s face, in the branch stump. 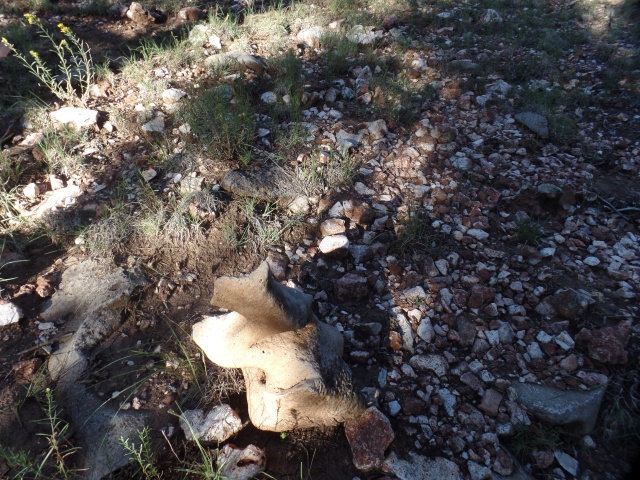 Bears are reported to be common here, but I saw no sign of them- not even old scat.  They are probably further north, or in areas more sheltered from the lightning that hits Juniper Mesa frequently, during the monsoon season, that is in hiatus for several days. 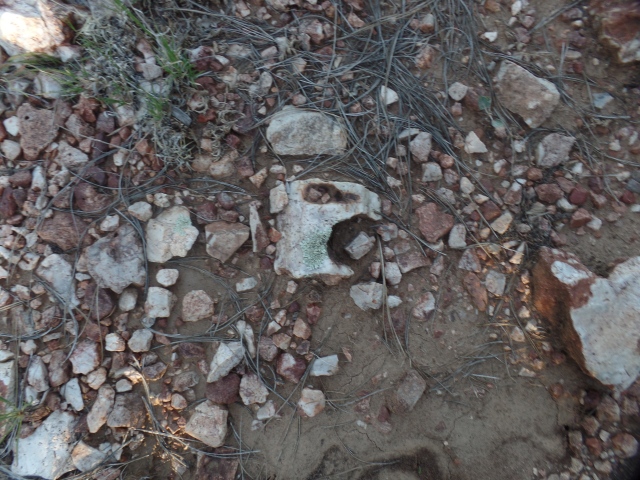 The rock above was given a fierce countenance, by a recent lightning strike.

Large cairns mark Juniper Mesa Rim Trail, at several points, especially after Oaks and Willows Trail branches off to the north.  A half-mile further east, I bid farewell to the benign rout along the rim, and began the descent, on steep Bull Springs Trail. 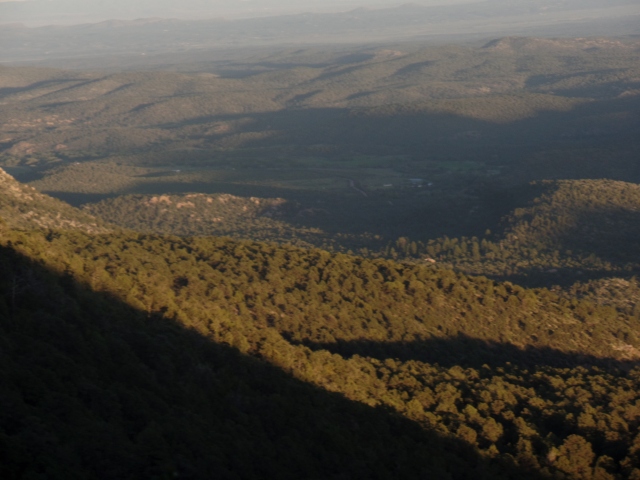 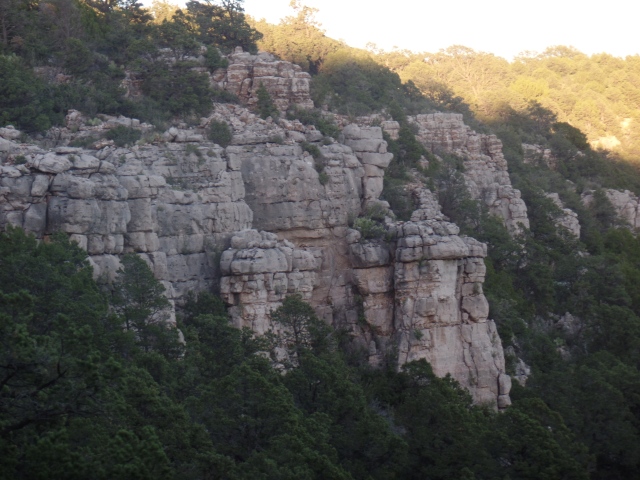 The cliffs seen above, and in the next photo, were redoubts for Yavapai and Hualapai warriors, who resisted the U.S. Cavalry in the 1870’s. 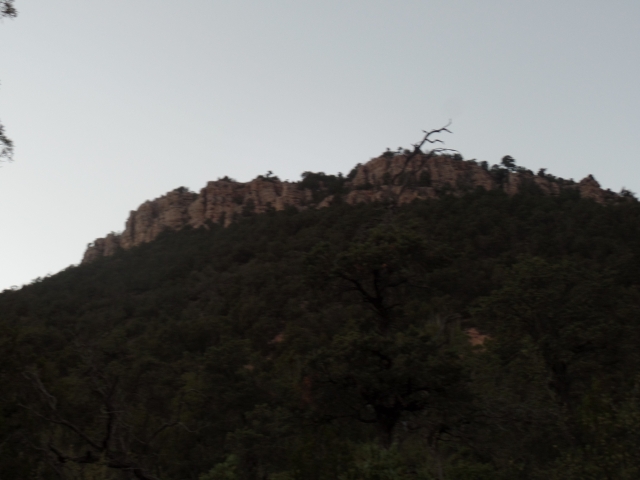 After climbing down from the mesa top, I followed Bull Spring Trail, into the darkness.  Although it was along this trail, that I smelled the bobcat’s markings, the animal itself stayed out of sight, and only small insects, attracted by the flashlight’s beam, showed me any interest.  It took careful attention for me to find the last trail sign, returning to the nub of Oaks and Willows Trail that led me to the car, but I enjoyed a very deep sleep tonight- far from Juniper Mesa.

This is one of several places, in the middle of Arizona’s “nowhere”, that have been on my hiker’s list, in the wake of having completed Prescott Circle.  Stay tuned for others.

Last Thursday was an exquisitely beautiful day, and I sensed it would be not good for my spirit to just sit inside and ruminate.  There was one walking path I had not established as yet- a pedestrian route to Yavapai College and the VA Hospital.  So, there was my Thursday afternoon plan!

The “single-step” in this jaunt was a walk along North Arizona Avenue, past the Arizona Softball Hall of Fame, and the Smoki Museum, which has, as its mission, the preservation of Native American culture.  As such, the buildings are constructed of native stone, with extended beams, in the Pueblo style of construction.

The first photo is of the Smoki; the second, of the Hall of Fame.

I crossed Sheldon Street a few minutes later, and entered the Yavapai College Sculpture Garden.  The community college has grown mightily over the past several years, but the Garden remains a focal point for meditation and serenity. 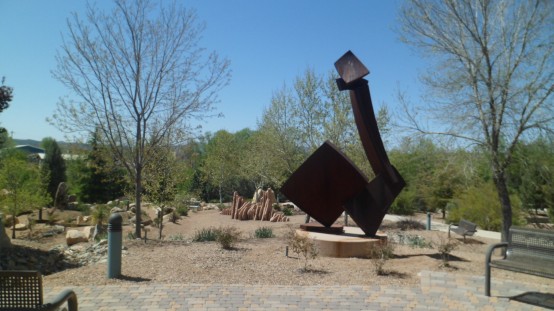 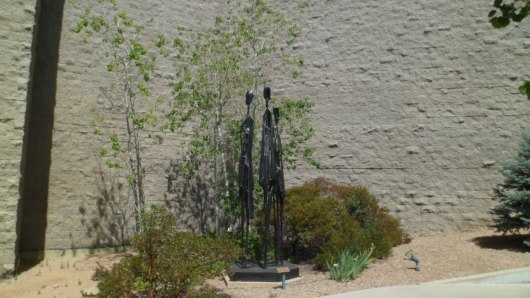 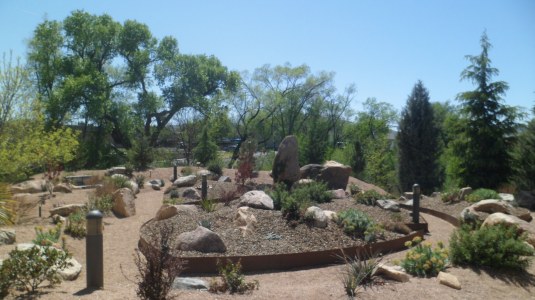 Water is a key element in the garden’s central piece, “The Gathering”, by Gary Slater. 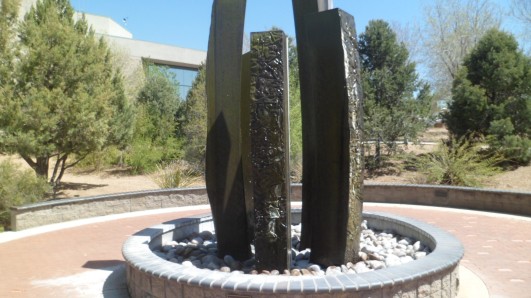 Alternative energy gets a pitch here, with these avant-garde windmills. 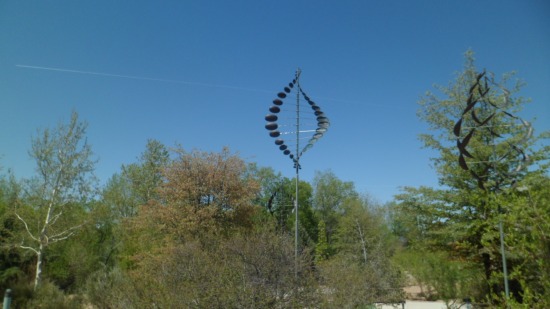 The north side of the college Library has been tapped for this interesting panel.

Across the dry creek bed, the roof tops of old Fort Whipple peek out. 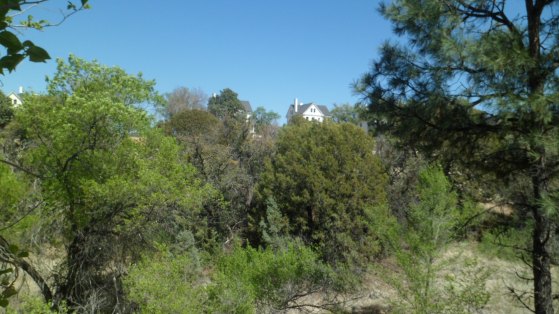 Having reached the northern edge of the College grounds, I continued on into Rough Rider Park, where there is a short bike and hike trail, leading to the grounds of Prescott Veterans Administration Hospital.  This is a good trail for me, as I visit the patients of the Community Living Center there, once a month.  Now, I won’t need to drive there every time.

On the way, an old rail bridge caught my eye, at the edge of Prescott-Yavapai Indian Reservation. 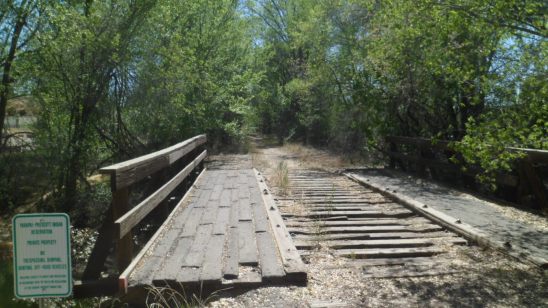 An extra feature of the Hospital is the preservation of Fort Whipple, an old Army post of Prescott’s formative years.  I first went in the Museum, which is open Thursday, Friday and Saturday, from 10-4.

Below, is the chair used by General George Crook, one of the more successful commanders at maintaining a semblance of peace in the Southwest, during the period of unrest among the Apache.

After looking about the museum for about an hour, I walked past the preserved old barracks.  The row of old houses, some still occupied by VA workers, cries out for restoration.

Having come full circle, I walked back to Yavapai College, which along with some parts of the Yavapai Reservation,and Rough Rider Park, was taken form land occupied by Fort Whipple.  The trailhead to Rough Rider greeted me, as I walked through the gate. 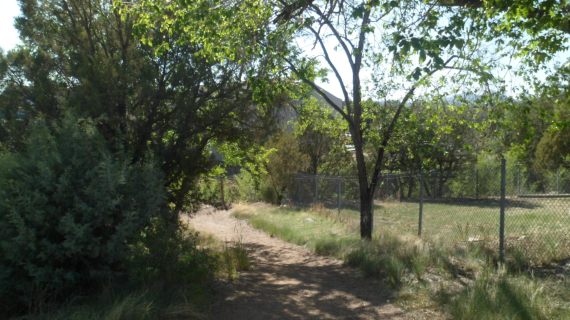 So, knowing three or four more spots to walk and meditate on a slow day- or a rough one, I am that much more settled into my near-downtown neighbourhood.

Prioritizing your life and love!