and attention to detail,

or to wasted time.

A small group got

The rest will depend on

is just a matter of time.

An entrepreneur has moved

her shop, three doors down

from where she was.

There will be a grand opening

of the new place,

even redoing some preparation,

that was set back,

when an opponent of her move,

scrawled graffiti on the storefront,

When an area is unused

and there is no tenant,

It is taking responsibility.

It is  moving a community

May 27, 2015, Reno- The atmosphere in downtown Reno, and along the Riverwalk, is changing.  The gentry have arrived, thanks to banks and high mortgages, leading to higher rents, leading to artisans moving out.  Gentrification here, as in so many other places, means condos, retro plastic furniture and limits on public parking.  At least near the Riverwalk, that limit is two hours, free.

A friend referred to Reno as being on the edge between mountains and desert.  Indeed, this is the case.  I have felt myself being on several edges, simultaneously, this week.  It’s not an uncomfortable feeling, mind you, but one which rewards alacrity.  Let’s see:  Cold has been followed by heat; rain, by bright sunshine; near-collapse of personal transport, by active efforts at repair of same.

This brings me back to the Riverwalk.  Several cities have emulated Le Promenade de la Seine, with San Antonio and Sacramento being the most prominent, here in North America.  Reno’s Riverwalk takes in the banks of the Truckee.  There are cataracts, narrow sluices and old stone bridges on which to focus.  The water is turgid, brown, and, at present, shallow.  Kayaks have run aground here, this year.  As I said, earlier, so have a few iconic artisan shops. Dreamer’s, where we eventually enjoyed iced beverages, has moved further downtown, into Reno Center.  Another, once comfortable, gathering spot has replaced a detailed mural with one that is more generic, and its big comfy chairs have given way to small, pea-green plastic seats, that remind me of the East Coast in the early Seventies.

Nonetheless, a Riverwalk is a Riverwalk, and there are places worthy of seeing here. 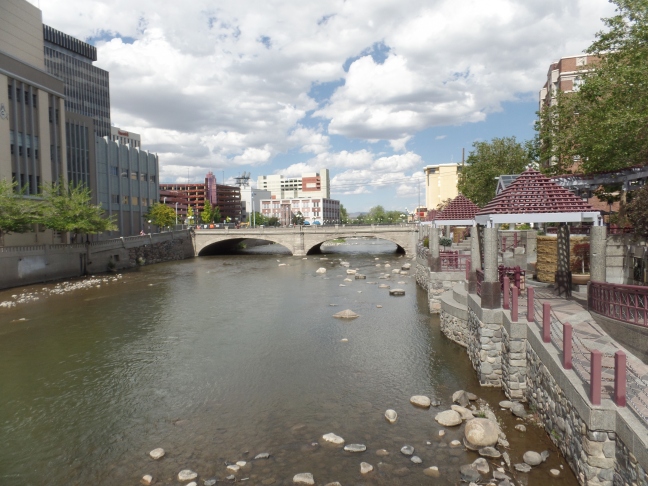 This is an eastward view of the Truckee.  The old bridge is due to be torn down and replaced, soon. 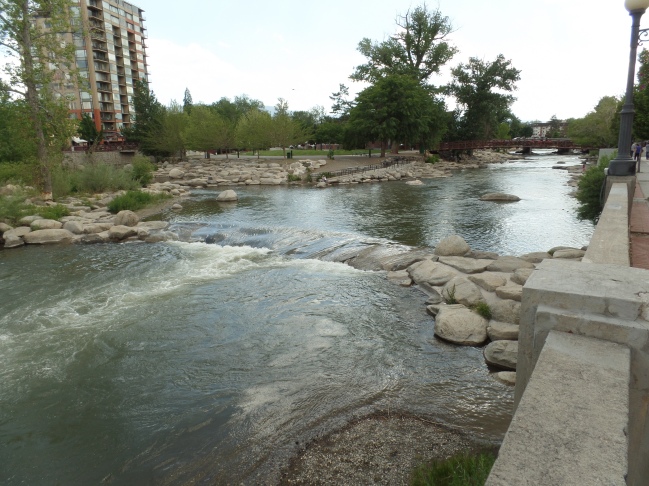 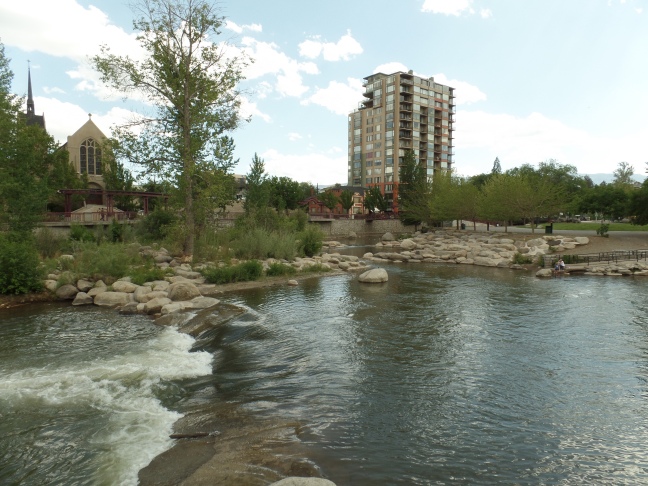 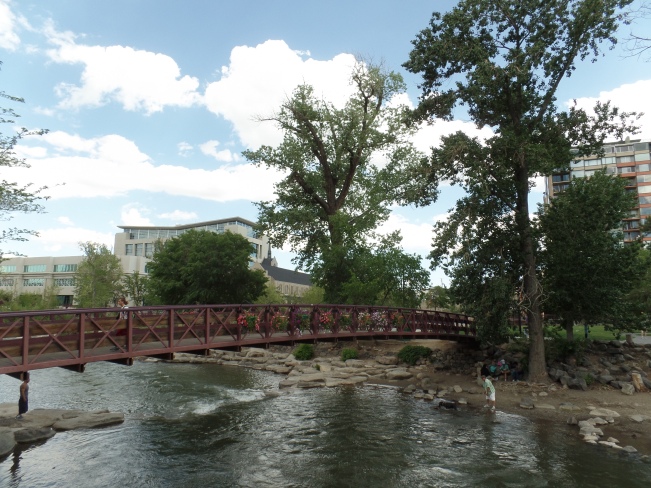 This bridge, in mid-Riverwalk, seems to be the most popular crossing.

The oldest church in Reno, First United Mehtodist, dating from the 1860’s, lies north of the river. 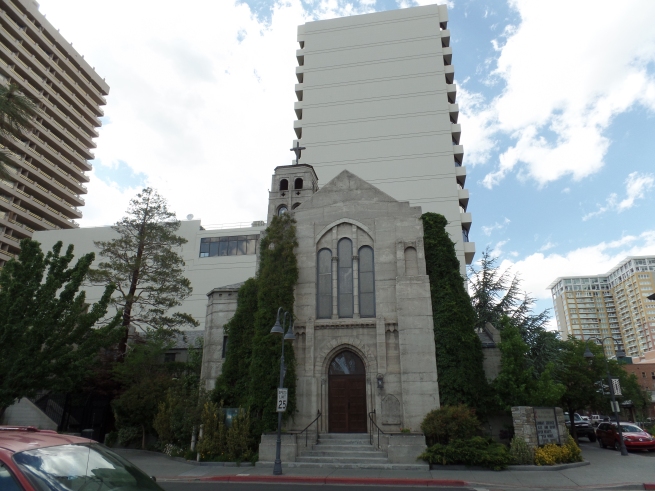 We moved towards downtown, after a quick walking survey of shops revealed trends which disappointed my host, a long-time resident. 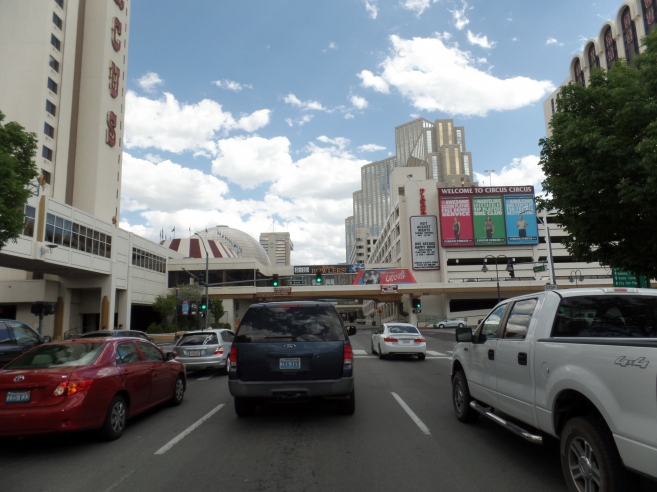 Outwardly, Reno has changed little, since I was first here, in 1980. 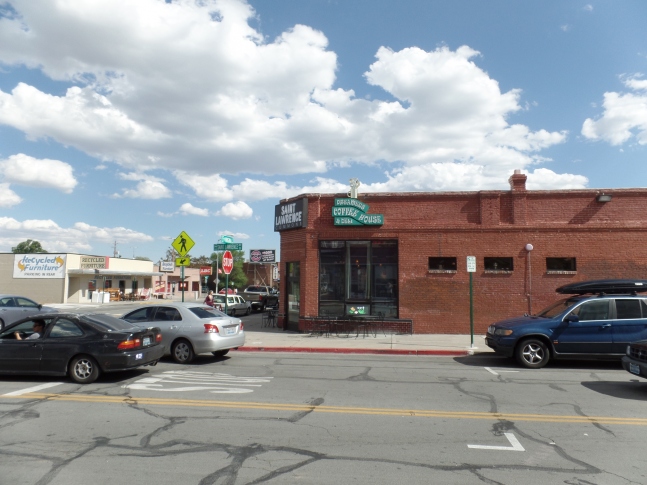 I know, I need to engage my zoom lens- and I have, since- just not here.

Whilst gazing upon the Truckee, my thoughts went back to La Seine, and to the Riverwalk of San Antonio.  The last has endured some bumps, over the past five days, with its river rising and falling- and possibly rising again this coming weekend.  My heart is with San Antonio and its sister communities, across the land of the Lone Star.

In the end, though, there is this truism: 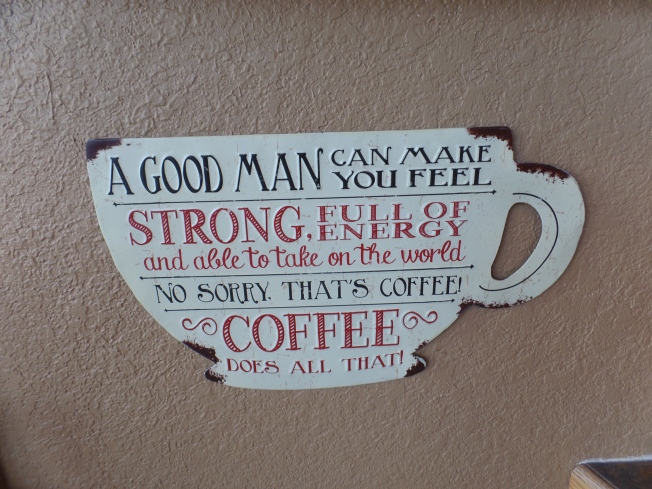 I have my good points, as a man, but coffee- Yes, it brings us all up to speed.