In the midst of confusion,

in the heart of despair,

I hear you say

“This nonsense about all lives matter

is not how we live”.

God gave it to all

each form of life

Each form of life

progress on the Spiritual Path,

progress on the path of knowledge,

progress on the path of gestation,

are the highest form of material being,

ever to live on Planet Earth.

It is always wrong for individuals

to kill one another,

whether in the name of vengeance,

or in the name of fear,

or in the name of science.

It is always wrong for individuals

to diminish one another,

whether in the name of superiority,

or in the name of  possession,

or in the name of  revulsion.

are the province of God,

for only He knows the hearts

Only He has complete

There was a time

when my maternal grandfather,

in the heat of frustration,

threw up his hands

and said he was through

with anyone who was

Papa was no teacher

He was a shoemaker,

and tireless in his labours.

Genetics passed his ethic on,

whom he never knew,

in his brief earthly life.

He watches us yet,

and makes his lessons,

even want to know.

In the midst of confusion,

in the heart of despair,

God’s love for us all

and through the clouds,

I made a silent promise to my long-departed maternal grandfather, whom I never met in this life, but who has appeared to me, a few times, that I would not give in to a more irrational level of acrophobia.  He has been one of my spirit guides, all these years, exhorting me to face life and overcome obstacles.  He and Grandma imparted that message to my mother and her siblings; an examination of their lives bears out  that exhortation’s fruits.

So, as I readied for visits to three of the overlooks at the North Rim of the Grand Canyon, there was no trepidation at engaging the heights of this wondrous place.  The North Rim exists at the highest point of the western Colorado Plateau. Had the canyon never been carved, one would face a 2,000 foot increase in elevation, from Tusayan to  the site of Grand Canyon Lodge.

My first order of business, after looking around the Lodge for a bit, was a walk out to Bright Angel Point.  As today was one of the most gorgeous Sundays in quite a while, there were dozens of people, of all ages, walking about or at least lounging on the Lodge’s patio, which also offers views of the canyon below.

Here are a few of those scenes available to the sedentary.

I then availed myself of a couple of overlooks, close to the Lodge. 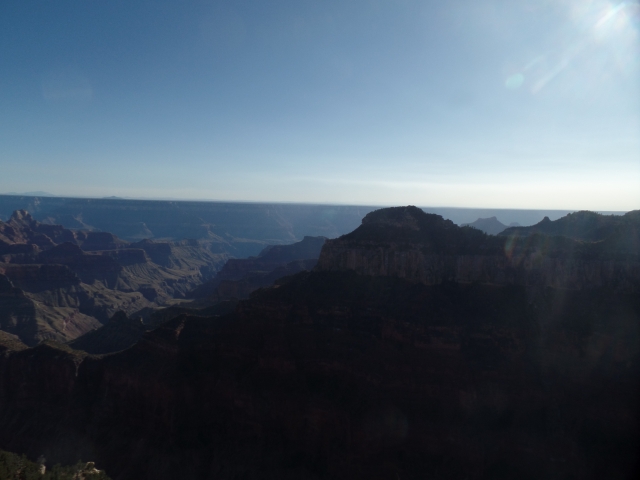 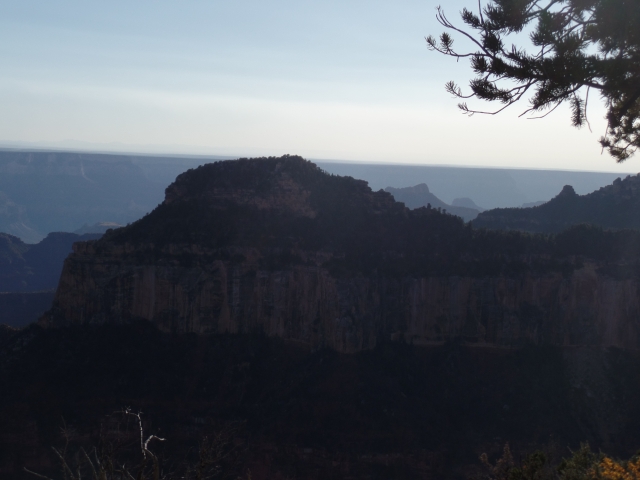 Bright Angel Point involves a fairly strenuous hike, mainly due to the elevation.  Those with pulmonary issues do best to stick to the Lodge area. An intrepid woman using trekking poles made it half-way, before concluding it would be a mistake to continue.  There were several of us late middle-agers who made the walk, though, along with folks as young as five. 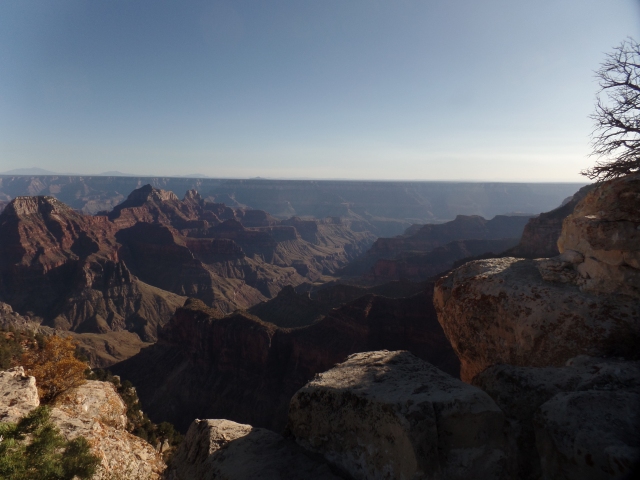 It was at the above guard fence that a little girl wanted to climb up, for  “a better view”.  You’d best believe her mother’s hands were firmly on her, for that exercise in bravery!

The various striations in the sandstone clearly show the levels it has taken, to build this most magnificent of geologic records.

In the next post, Point Imperial and Cape Royal offer a northeastern perspective of the Canyon’s wonders.

Yesterday could have been seen as somewhat of a bust.

I didn’t spend all that much time at a memorial picnic.

I felt there were some serious issues of trust,

coming from some of the people closest to the man,

in whose memory we were gathered.

Earlier, I had been at a place where trust HAS been earned,

and, in honour of my maternal grandfather,

I never met Papa, in this life,

but his forebears hailed from Silesia,

when it was German turf.

There was, then, as now,

a great deal of interplay between German and Pole.

So, Polish sausage, with sauerkraut and Dusseldorf mustard, it was.

There was great food at the picnic, as well,

and the Mariachi were heartfelt in their performance.

It was a magnificent tribute,

frayed only by that lack of trust,

something that the honoree would never have countenanced.

I moved on, and read, just this morning,

a horoscope that told me,

those who hurt you were doing the best they could,

None of us, really, are ourselves,

in the wake of shattering loss.

A lot of people were hurt,

in the wake of my mourning.

Some have never forgiven;

most have moved on.

I happened on a troubadour.

Her message, sung across the miles,

to the one man she loves with every ounce of her being,

was just how lucky he made her.

heard it in their hearts, too.

I know that feeling, so well.

My spirit angel was one of a kind.

She said to us, to me, if you’re struggling,

She sang of falling gently,

as she did for the man who waits for her,

back in Cape Cod.

and if you’re ever in Cape Cod, catch one of her gigs.

Many people gathered today, in Punxsutawney, PA, and learned from Phil, the Groundhog, that there will be six more weeks of winter.  I’ve heard it’s been a mild one, back east, so six weeks of rain would be a tad dreary, but not insurmountable- unless the rain comes in torrents.

Here, we seem to have had our winter.  SoCal is due for more rain, tomorrow, but not so our neck of the woods.  Of course, Mother Nature has this month and March, during which to send surprises our way.  I remember the year that St. Patrick’s Day saw snow, atop the White Tanks, west of Phoenix.

A few years ago, I read a book called “Awakening Intuition”, by Mona Lisa Schulz.  I learned that the “inklings” that I had, regarding what I was to do, during the years 2011-2015, were fairly clear.  Most of those were accomplished, with considerable help from unseen forces.

I am reading “The Standing Stones Speak”, by Jessica Hoffman and Hamilton Hill, which has what some regard as a “New Age” tone to it.  Since childhood, though, I have felt, strongly, that I am guided by both angels and my own ancestors, including my maternal grandfather, whom I never met, in this life.  What I have received from him, holds me to a high standard, both socially and spiritually.  Penny, in the last year of her life, told me that she saw my Native American ancestors, gathered around me, while I was napping.

I don’t doubt any of this, though some of my hard-headed friends would call it “Woo-woo stuff”, as there seems no practical or tangible value to it.  I have a different view, and we’ll leave it at that, for now.  Nonetheless, the spirit world is flexible, and some of the inklings I’ve had, have been changed.  In 2013, instead of going to Newfoundland, I stayed in the Boston area, and spent more time with my family, especially with my second brother, who was involved in Sail Blind, at the time.  Considering that I went through tortuous emotional issues, earlier that summer, it was probably best.  Last year, instead of going to Chile and Peru, I opted to go, domestically, East and South.  Considering that I got a message, in the middle of the trip, saying that my Nissan was making its last ride, the choice was apt.  As you all know, the Nissan did expire.

I’ve now been advised to work, full time, until either December, 2020 or May,2021.  There are other messages I’ve received, but those are best left for a later date.