When I was getting ready to leave Jeju-do, in 1992, one of a series of exit interviews was a visit with the then-mayor of Sogwip’o, southern Jeju’s commercial center and the present governmental unit for all of Jeju, south of Halla-san.  He asked me whether Sogwip’o had a bright future and whether I would promote the area, once in the United States.

At the time, all I could do, promotion-wise, was talk the area up, among friends and acquaintances. I did, however, see that it had a bright future.  Time has borne this out.  Sogwip’o’s population has climbed to over 100,000 residents, including a fair number of condominium owners from China ( as is also the case with Jeju-shi) -enticed by the favourable China policy of the island province’s government.

Nonetheless, I found the sections of Sogwip’o that we visited are still quite blessed by natural beauty, though the whole development of the coast  has resulted in a drop in the water table, and some drying up of the area’s waterfalls, as was evident when we went to Jeongjeyon.

Our first stop, though, was a coastal beach in the village of Jeungmun, which is the site of a Hyatt Regency Hotel.  This was a place we visited on occasion, when we lived here, as Penny and I knew the General Manager of the hotel.  It is also the site of a meeting between then- South Korean President Roh Tae-woo and then- Soviet leader Mikhail Gorbachev, in 1991.

One of my favourite natural spots in Jeju is adjacent to the Hyatt:  Jusangjeoli.  It is a segment of volcanic beach, which we once accessed from the Hyatt’s own beach.  So, the three of us went down to the beach, from a fairly new area, highlighting Jeju’s citrus industry, which is one of the island’s economic staples-along with tourism.

Here are some of the scenes we encountered.

The main draw for tourists, though, is the lava-strewn beach.  As with Songsan, a wide variety of shapes may be discerned, on Jusangjeoli’s paths. 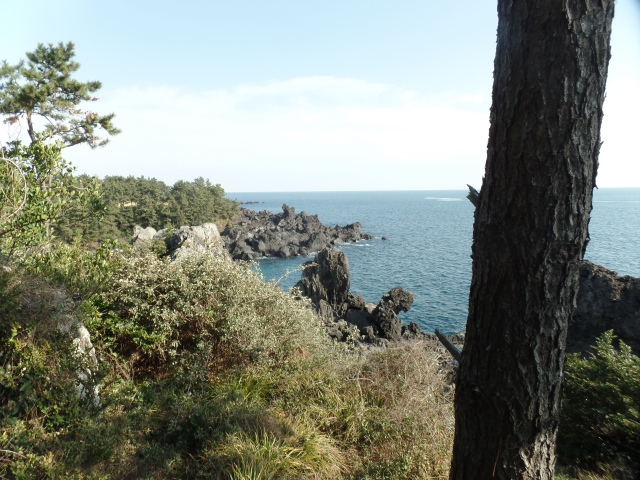 The dragon countenance is found in many areas of Jeju. 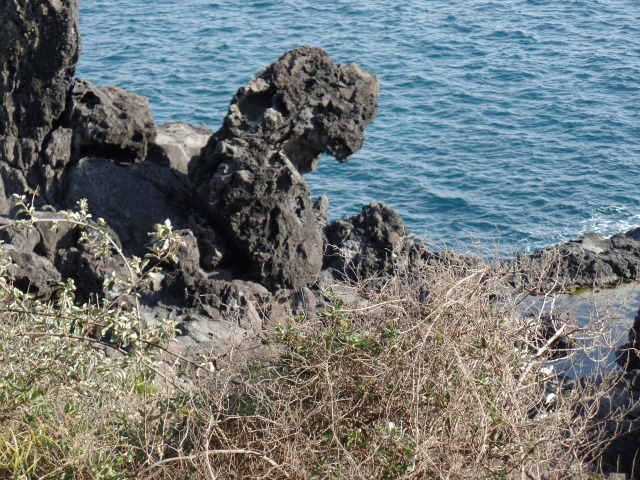 These slats are not a mock-up of a luxury development.  Wind and water shaped them, over the centuries.

The likenesses at the head of this formation are not a pair  I’d want to meet in a dark alley. 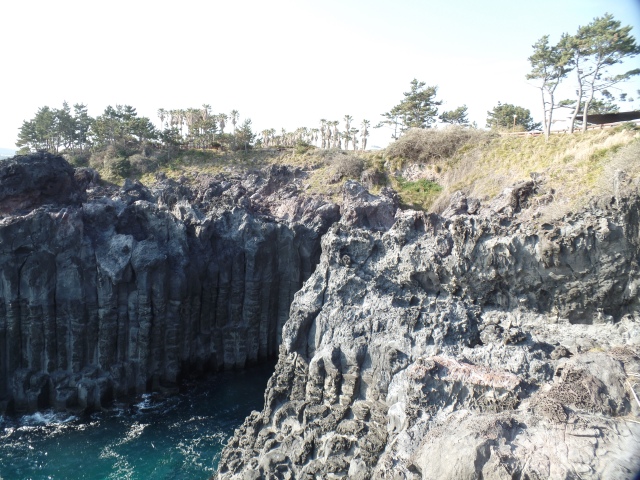 This Peace Park, between Jusangjeoli and the Hyatt, is a place for both quiet reflection and the romping of spirited children, who like to hopscotch and play tag, around the surrounding zodiac stones.

As this had been a very full day, already, we chose one of Seogwipo’s three waterfalls to visit.  Jeongjeyon is further west and north of the other two (Jeongjiyon and Jeongbang).  Its namesake waterfall has dried up, as a consequence of condominium development- something of an issue now, between locals and Chinese immigrants, who favour such development as a way to invest their income.

Nonetheless, Jeongjeyon has a continuing aesthetic appeal.  There is no dam here, just a lack of running water, at this site of the first cataract. 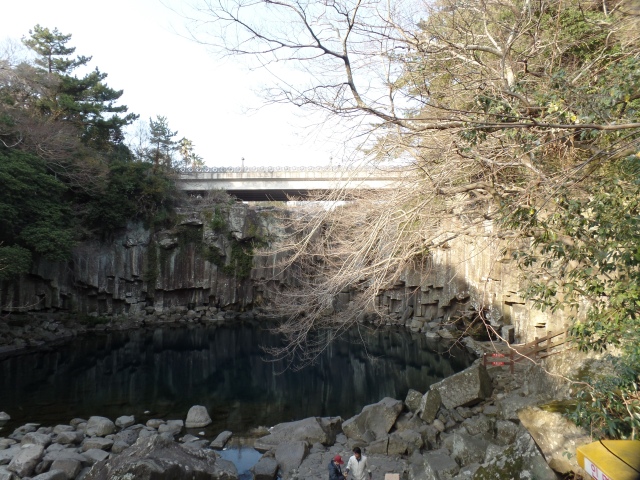 The second cataract proved the most active of the three.

Here are some stairs to nowhere, in particular.

Despite the shortage of running water, Jeongjeyon’s flora is thick and prolific.

The second cataract also seemed to be a bit on the mild side, in terms of flow. 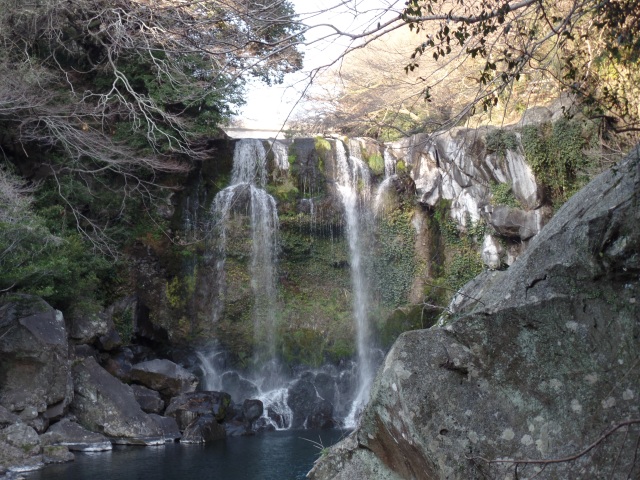 Visitors drop coins into the second cataract’s pool, as a means of making a wish.

This is Seonimgyo, or Seven Nymphs Bridge, which connects Jeongjeyon Falls with the Jeungmyun Tourist Complex.  It depicts the seven nymphs, of legend, who descended from Heaven, at night.

The third cataract had more water, and also required the most stair climbing. 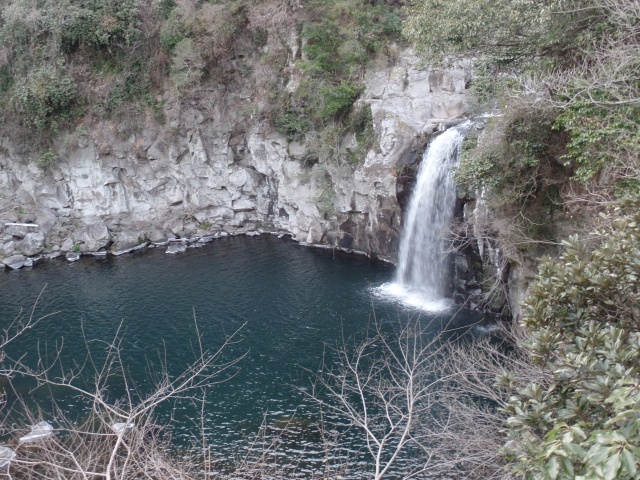 We were quite worn-out, by this point,  So, after a delicious seafood meal, we headed for our lodging. 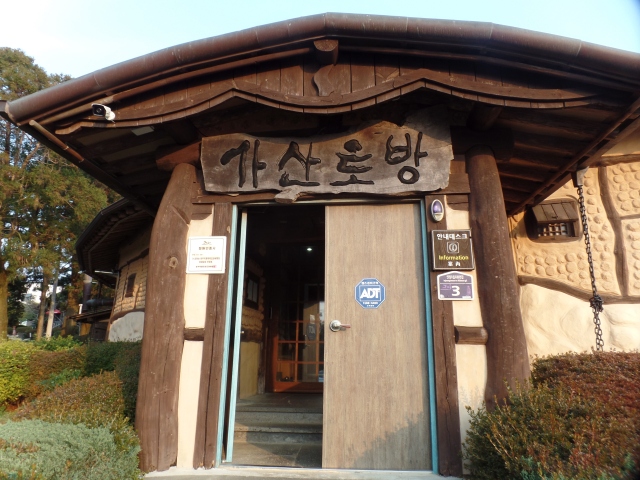 Ga San Ho Bang is a dormitory-style hotel, offering yurt-style rooms, with male and female shared bathrooms. I was well-rested, after a night in this cone-shaped room.  It had ondol, or water-heated floor pipes, so the room was especially cozy.

NEXT:  Hallim Park- Caves, Botanic Gardens and An Army of Stone Guardians