I was just sitting around today, writing two more chapters of my memoirs, and musing about what it is going to take to push the dry air out of our area, after two days of looking at heavy, dark clouds that are five miles to the east. (Prescott is alot like Ojai, or Reno, a dry bubble in the middle of a rainforest).

I also think about what I like about the two seemingly opposite groups, on our social scene. Here are things I like about progressives:

The differences are there, but we need not dwell on them. Individual initiative may be found in both groups. The welcoming of change is greater among progressives. Cherishing of tradition is greater among conservatives. Yet, both groups find room in their worlds for adaptation and preservation.

That’s where I find the state of what matters most.

One of those ways, common to many, regardless of ethnicity, legal status or the historical background, is what Dr. De Gruy calls vacant esteem. The listless, the self-limiting, the soporific, the “crabs in a barrel”-all work overtime to keep both themselves and those around them in a state of suspended animation, or at least on a very basic level of achievement.

Society has largely answered this phenomenon with outwardly loving, but ultimately debilitating, practices like “the Self-Esteem movement”, participation awards, and worst of all-the simplified curriculum. We are seeing what these have brought- Along with the spread of a mindset that anything not perfect merits destruction, (the ULTIMATE crabs in a barrel mentality), the sense that “my ignorance is as good as your intellect” has brought us to the Age of Confusion.

It is in this clime, that opposites may be switched: Up is now down; black is white; good is evil; hatred is love. Into this setting come the notions- that anyone who thinks differently than oneself is demonic and deserves death; that one must dither and accommodate every single idea that is proposed, in the name of “fairness”; that rapid change must be opposed at all costs, or, conversely, that anyone opposing change needs to be pushed aside. It is not long in coming, when such attitudes, collectively, result in chaos, that authoritarian thinking, on BOTH sides of the divide, gains primacy.

We are seeing the seed sof this, here and now. Generations of authoritarian policing, (hardly everywhere, but in a critical mass of public experience), combined with long-standing authoritarian executive thinking-at the county and state levels in both “Liberal” and “Conservative” jurisdictions and at the municipal level in cities like Chicago, Los Angeles, San Francisco and New York, have resulted in a certain public sclerosis in thought, as to how change should be brought about. This has been countered by academic authoritarianism, so that ANY adherence to conventional ways of thinking about the nature of this country and its past, or about HUMAN nature, is subject to being uprooted-violently if necessary. The academics who push this agenda are failing their acolytes.

The violent pushback that has shown its face in Portland, OR will spread, not the least because conservative people are still as sensitive, still as subject to fear, as are Liberals and will support THEIR authoritarians, in suppressing the authoritarian forces on the Left. It will spread because of overkill, overreach- the cries for toppling statues of ALL of the Founding Fathers, of ALL religious figures, of ANYONE who ever uttered an unkind sentiment about someone of a different skin tone, sexual orientation, gender status, creed or social class; the calls for putting someone like J.K. Rowling TO DEATH!

Such authoritarianism will be, deservedly, opposed by those who don’t want its equal and opposite reaction. The demonstrations in Portland, prior to the deployment of plainclothed Federal agents, were for the most part mellowing, according to people who LIVE there. The hornets were settling in their nest, but once the nest was whacked-well, “torch the Courthouse” was not long in following. Thus, the self-fulfilling prophecy, that only FEDERAL FORCE will crush the spirits of those on the Left, gains currency among those in the socioemotional Heartland.

I love too many, especially of the younger generations, to sit on my hands with this one. It is time, with a very narrow window, for the neofascists in academia to let up and stop agitating those who know and feel the need for social change. It is also time, with an equally narrow window, for the Old Guard Fascists, who seem so set on flooding the streets with their forces of occupation, to pull back and to ENGAGE with those currently tasked with leading our cities and states.

Engage, and be specific with your expectations, the way parents, teachers and community leaders at the grassroots level have to be.

The clock is ticking, and it’s not made in China-yet.

The mandala was prescient.

This is the last day of summer/winter (I reference the juxtaposed seasons, in acknowledging the essential unity of north and south.  Both extreme seasons present challenges.)  Fall/spring, starting tomorrow, will offer celebrations of fruition or of new beginnings.

I drew a mandala, yesterday, in the course of attending a small peace gathering, in the early evening.  Being no great artist, but having a curiosity, I let the Universe guide my thoughts, starting with a bright, fiery orange circle and moving outwards. 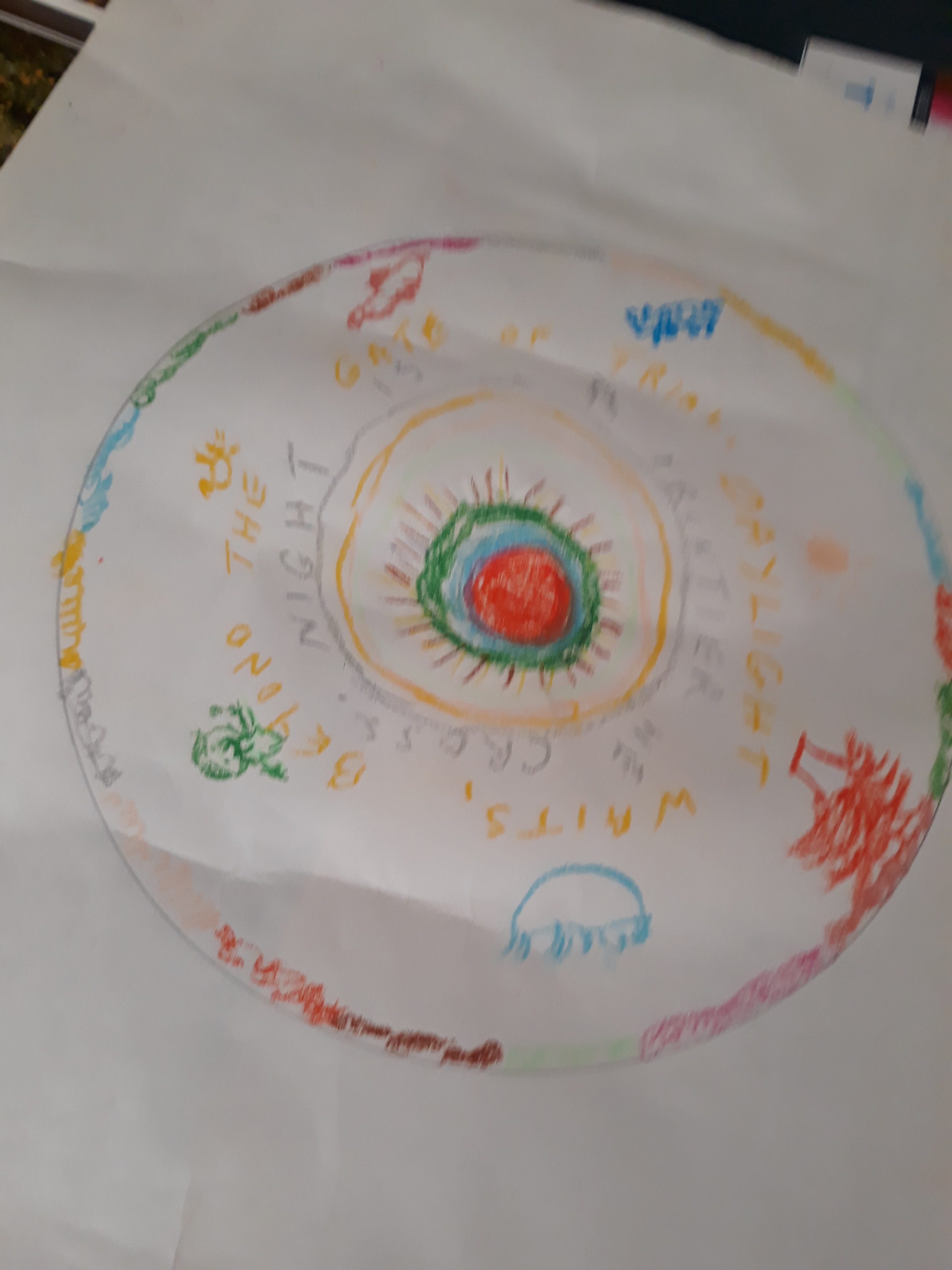 Clashing, opposing colours are placed alongside, or in succession to, one another.  A green human and animals of colours with which they are not normally associated, occupy the outer layer. That you may not be able to distinguish which is which, is a testimony to my own rudimentary art skills and to the thick, stubby crayons provided.  No matter-the message is one of coexisting with differences and among opposites.

That was a key point of the entire day.  I spent a good part of Saturday walking a hilly neighbourhood, visiting people ranging from a transplanted Southern man proudly displaying a Confederate flag to a young woman professional and her dogs, all for the sake of verifying that the homes either had working smoke alarms or that my team mate and I installed them, before leaving the area.  It was all part of a concerted effort by the Red Cross to keep yet another neighbourhood safe.  Most people in the area covered have indeed tended to their own safety.  Heightened awareness, and insurance company diligence, have greatly lessened our workload.

After resting a bit, the evening Peace events beckoned.  I walked a labyrinth, at a church up the street, savouring the serenity that such calm attention to detail brings.  Then came mandala activity, followed by three of us Baha’is saying prayers, in front of  a very small audience-quality not quantity!  Before we prayed, a very nice lady, who had practiced three songs of peace, but had not had an audience for her scheduled performance, was invited to offer the songs.  Delivered a capella, these original songs, in a soft jazz lilt, created a lingering air of power and strength.

The evening brought another activity- Dances of World Peace, which I learned is an ongoing monthly activity of the Prescott Sufi Community.  Building peace between individuals, these dances involve following a few fairly simple moves, and rotating among partners-without regard to gender or age.  The point is acknowledging each person’s presence and spirituality.  That draws people out of pre-conceived notions and out of their comfort zones.  Yet, as I think of it, that which takes me out of my own comfort zone, has the effect of expanding that zone.

The mandala was prescient.  It had me draw opposites together, which is really the point of world unity.  The past several days, most recently this morning, I have been contacted by  social media friends from countries I’ve never visited, and which have not been on my immediate radar.  The Universe is telling me, a few years in advance, to get ready to expand my world, and comfort zone, even further.

The words that came to me, to write on the mandala:  “Night is the frontier we cross. Daylight waits beyond the gate of trial.”