Among my circle of family and friends, a half dozen or so live in and work around Hollywood, with a view towards making it in the film industry.  I have a sense that each of them will make their mark; some being steady and modest successes and others rising to considerable fame.  This is a harsh environment, both in terms of the level of competition and in the amount of stress that striving to entertain others produces.  Then, there is all that comes with living in Los Angeles- Knowing how to adapt to high volumes of  vehicular traffic and living among a lot of people with intense schedules and lifestyles.  The same could be said of New York, Chicago, San Francisco, Atlanta or Seattle; in fact, of any large city.   Los Angeles, though, has The Allure; a generally mild climate and a goodly number of laid-back people, scattered among the intense crowd.

Penny and I visited Hollywood, in the Spring of 1986, heading straight for the Walk of Fame, after having spent a day in Disneyland and the following evening at Knotts Berry Farm.  This was our only trip to LA.  All other California visits focused on San Diego, Santa Cruz and, once, Santa Barbara.  Since she’s been gone, I’ve been in the LA area a few times, but today was my first visit back to Hollywood.  This time, the Walk of Fame was not on the agenda.  My purpose was a visit with one of the above-mentioned aspirants in my circle, who is one of my son’s best friends, and the venue was a small eatery on Hollywood Boulevard:  Division 3. 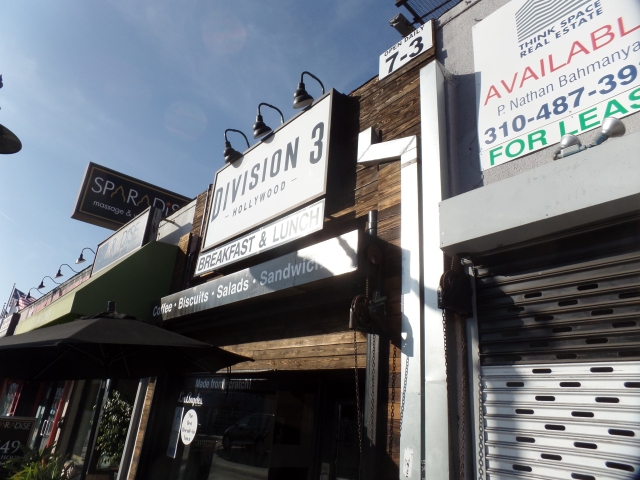 As you can see, Hollywood, as it exists for many people who live there, is rather densely built, with parking at a high premium.  All manner of people are out and about.  I initially parked about a half-mile away, near a Catholic school, well off the main drag.  When I.P. arrived, we walked up to my parking spot and he told me of better, closer spaces.  So, Elantra ended up about two blocks south of Hollywood and Bronson.

Back at Division 3, we enjoyed about 2 1/2 hours of conversation, catching up on all that transpired since Aram had last visited Phoenix, about four years ago.  As it happened, that was the length of time that the harried restaurant chef needed to fill our order.  Hollywood establishments frequently get slammed with large, spur-of-the-moment orders, especially at lunch time.  The fare was worth it, as neither of us happened to be in much of a rush.  One touching moment was a homeless man, seemingly a bit confused, asking me where Michael J. Fox was.  I told him Mr. Fox was off working for Parkinson’s research, which made him feel better.  IP and I got in our Hollywood, 2019 photos. (That’s my camera case, on my right hip, BTW.) 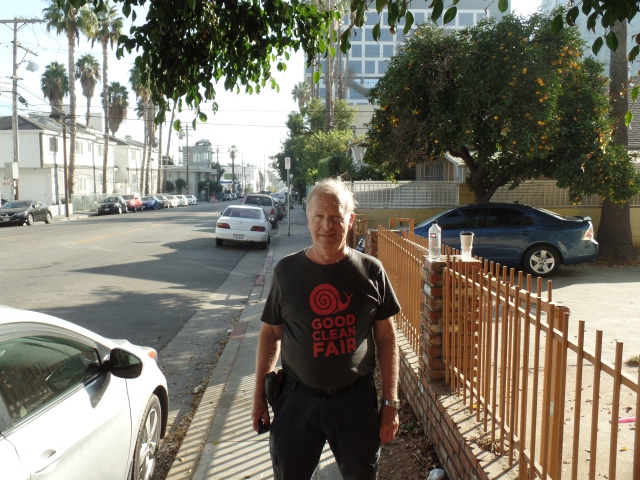 The meet-up ended all too soon, and I was off on the last part of this LA adventure: The Slog.  Hollywood-to-Rossmore-to-Wilshire-to-Crenshaw-to- I-10 was pretty much a breeze.  LA to Palm Desert was far less so.  It was 3:15, when I merged onto my moving home, for the next four hours.  What is comforting about The Slog is that, as in Chicago and New York, people have worked it out. Public Enemy # One would be anyone who causes an accident; things are hard enough as it is.  We were family in anonymity,  keeping watch for those who were moving slower or faster than the majority.  No one, in my scrum, was injured or inconvenienced, and by 7:15, I was in Palm Desert,  stopping to visit Bill Tracey’s crew at the third branch of Bill’s Pizza.  It is a large, spacious and very welcoming edifice, off Highway 111. 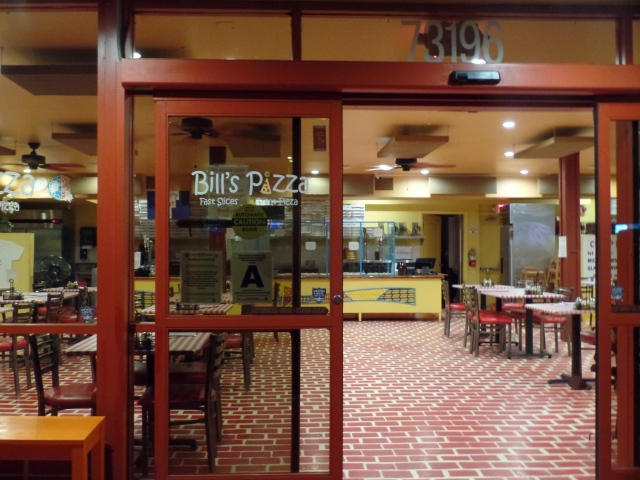 The Slog is hardly something in which I will be partaking, frequently.  It is an ungainly use of  energy, time and space, necessary, for the foreseeable future-but crying out for alternatives.  Surface roads help out some; yet mass transit and more regional urban villages need to be a greater part of the mix.

I am stopped for the night, at Western Sands Motel, in this easternmost edge of LA’s Metro Extension.  Tomorrow, I head back to Home Base and preparations for what may turn into an early winter-snow is part of the forecast, next week and the week after.

Bill Tracy passed away last Thursday, after a month-long decline, triggered by a fall from the roof of his Palm Desert restaurant.  Bill was one of those rare individuals whose concept of business was primarily as a means of giving back. He had three restaurants in Prescott-The Dinner Bell (ironically, a breakfast and lunch establishment), Bill’s Pizza and Bill’s Grill.  Feeling age, he sold those establishments, in 2015, to a friend who has kept Bill’s vision.  Bill’s Pizza, for example, donated about twenty large pies to the Farmers’ Market Board, yesterday, to feed volunteers and staff at the Farm-to-Table Dinner.

Bill’s philanthropy was where his heart was.  He gave to a variety of causes and regarded the needs of the community, both in Prescott and in the Palm Springs area. He has helped our local Red Cross Chapter, as well as the Farmers’ Market and a local street ministry. Bill hired those who were disadvantaged, and worked with them to develop job skills.  I have eaten at all three of his restaurants, on several occasions over the years.  I never met the man, but I saw his ethic at work and notice that there is a close camaraderie in each of the establishments.

People like Bill Tracy are the gold standard, combining social sense, business sense and deep character.   Many of us strive to develop one or another of these qualities, and make a good effort at it.  Bill had the drive and sense of constancy to keep up with the changes and chances of economic downturns-and was a force in establishing shelters and care programs for the homeless, both in Prescott and in the Palm Springs area.

He won’t return to Prescott, but I daresay his spirit will never leave this community.

Oct. 22, 2014, Newport Beach- Each time I venture out to San Diego, I make a foray into Orange County, and usually try to get up further along the coast.  This time was no different, and I met an online friend and mentor at Crystal Cove State Park, Newport Beach, in mid-day.  J is always enthusiastic about the California coast, and is a good source of information about the state of affairs in SoCal, which is more crucial to the welfare of the rest of us than we might care to think.

The weather was dry and mild, when we landed in San Diego, two days earlier.  It was a nice Monday and Tuesday in San Diego, as I mentioned previously.  Wednesday morning found me headed north, on a smooth-flowing freeway and with comparatively little traffic on the Pacific Highway, from Dana Point up to Crystal Cove.  There were about a dozen people on the beach itself, being Wednesday of a school week.   As we strolled the beach, the work of a couple of children was in evidence. 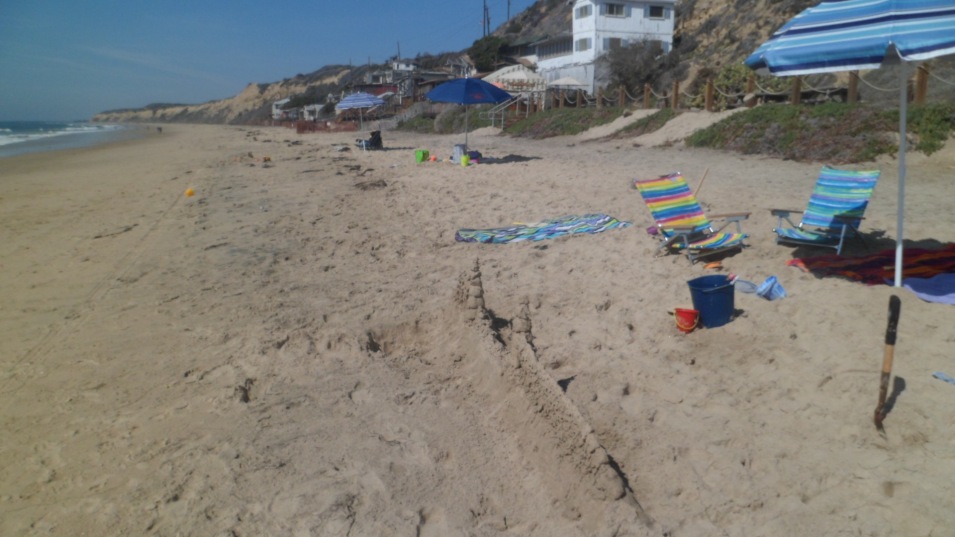 Beachcomber Cafe, where we had lunch, is a reliable spot, for good food and entertaining people-watching.  J and I have been here twice before, and spent close to an hour talking of her concerns about California and of my experiences in Honolulu and  at sea.

After lunch,we focused on the troubled north side cottages of the beachfront.  Crystal Cove Alliance is working on restoration of the deteriorating structures, and has largely completed the work on the south side.  The rest of the work on the north will likely begin in December, according to the flyer I read.  These cottages are actually unique for Orange County beaches, which are largely structure-free, aside from changing rooms and lifeguard towers.  Their restoration would be a fine achievement for Newport Beach. 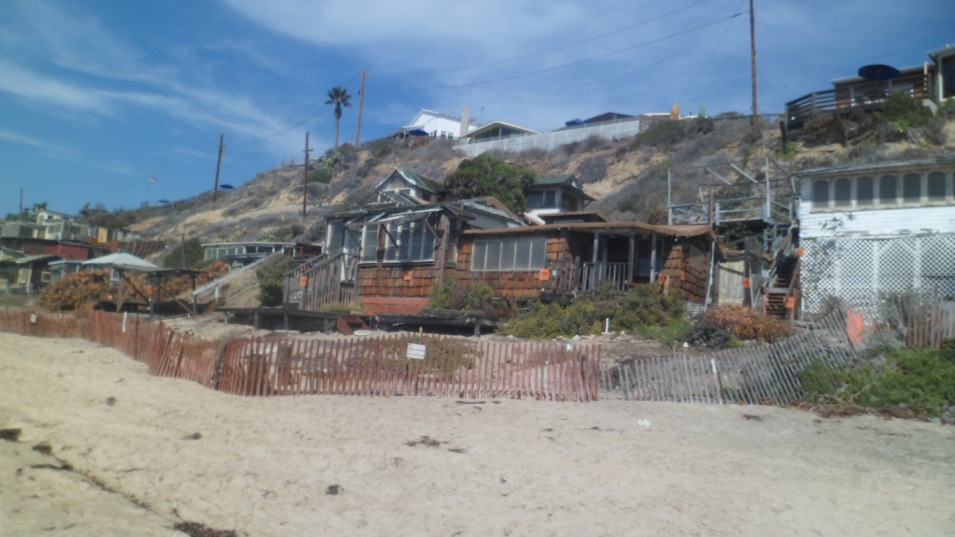 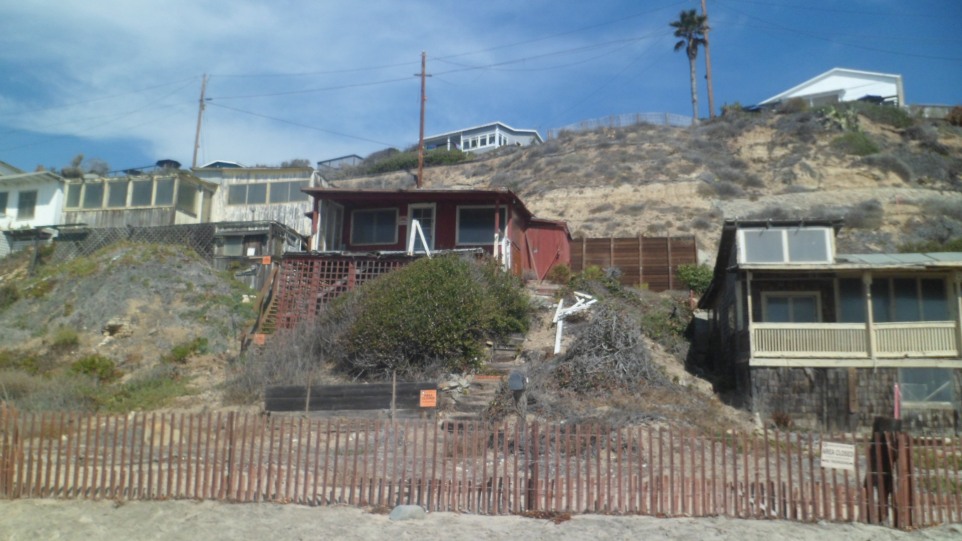 After, J bid me farewell, I decided to end my northward quest, for now, and headed back towards Arizona, opting to take the back roads from Oceanside to Palm Desert.  It’s a winding route, but traffic is minimal, especially once past Temecula.  I stopped only to wonder at Cahuila Tehanet, just southwest of Palm Desert. 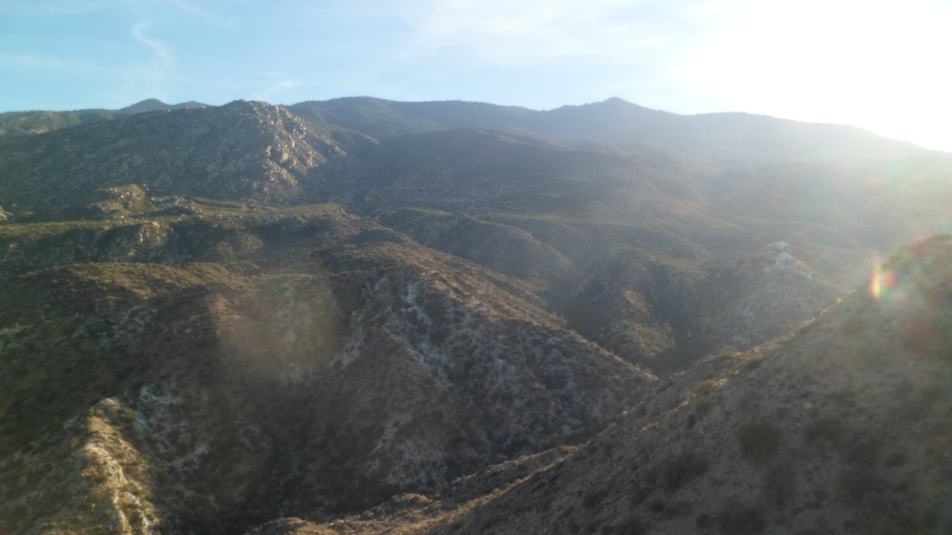 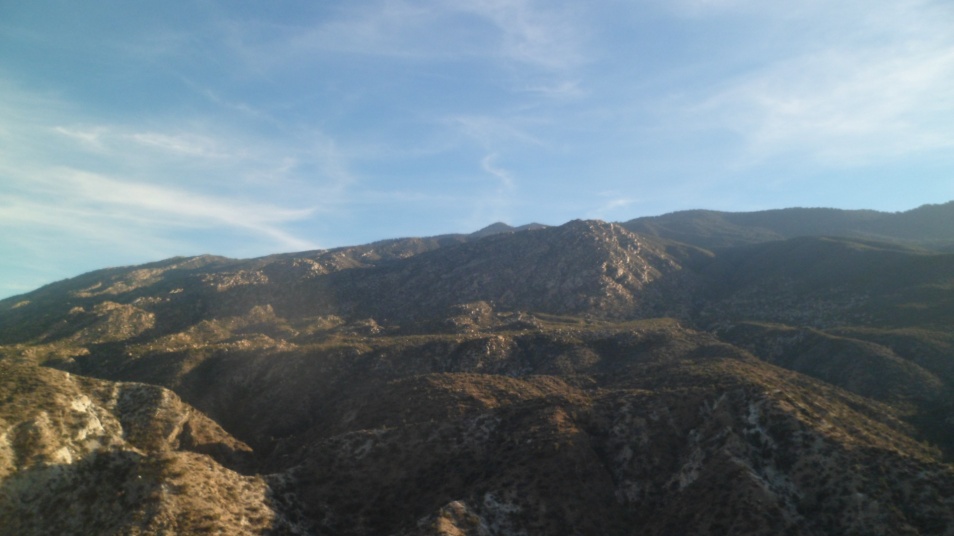 The rugged outback of SoCal’s Colorado Desert seems to be one of the sub-state’s best-kept secrets. Well, my list just keeps getting longer.  For the moment, though, I felt the homeward tug, and made it to Blythe, and Relax Inn- recharging, before driving back to Prescott, the following day.  Like Arnold, I’ll be BAAHCK.