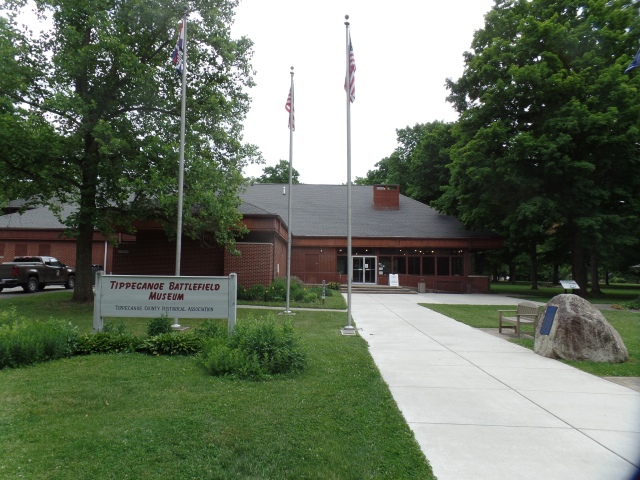 My morning was spent, very well, at Tippecanoe Battlefield Museum

.  After viewing a film on this unfortunate event, it occurred to me that, had Tecumseh not been taken in by the British, he may have reached some sort of accommodation with at least enough of the west-bound Americans, that Harrison would be remembered as other than as the President who served the shortest term, before dying of the lingering effects of pneumonia. Tecumseh, also, might have lived to promulgate the Federation of Native Americans that he so treasured.  The Prophet might also have figured in the spiritual renaissance of the confederated people.

It was not to be, though, and the Battle of Tippecanoe might easily be regarded as the opening salvo of  the War of 1812.

It is commemorated by this obelisk. 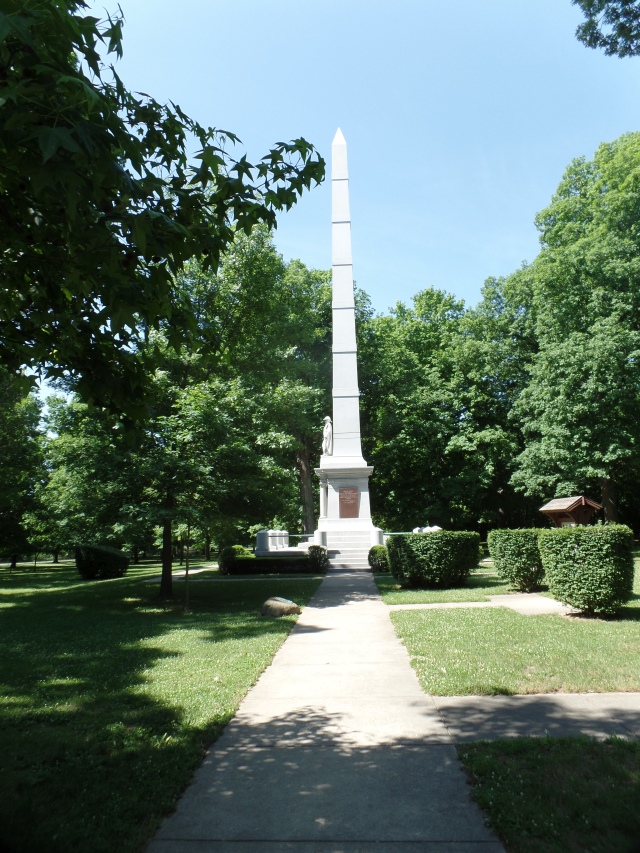 This diorama shows a Wea couple, as they may have appeared in their home, at a village similar to Prophetstown.

Nearby, is a more heartening place.  The Wabash Heritage Trail stretches from this engaging Nature Center

This surreal scene was taken from behind  a one-way mirror.  The birds and rodents could not see me, but I think a  red-billed woodpecker saw its reflection in the window and rammed the glass with its bill.

After a few minutes of watching the action, I took a 3-mile round trip hike, along the Wabash Heritage Trail, going as far as Barnett Street Bridge.  The full trail goes to Fort Ouiatenon, a ruined fort, 13 miles to the south.

Here are some scenes of this northern segment of the trail.  It follows Tippecanoe Creek.

Black lace wings kept me company, at various points along the trail.

The creek had to be forded, at one or two points along the trail, but it was more muck than running water, at those points.

Finally, I turned around at Barnett Street.

As it was 87 degrees outside, this was enough.  My reward, about three hours later, was a home-cooked meal, courtesy of an old friend-and a new one, who was grill–master for the evening. Then, I found my way to a true Budget Inn, here in Elkhart.