I have had this urge to further explore the area of Agua Fria National Monument known as Badger Springs, for some time.  Looking at the weather prognosis of rising temperatures in the Sonora Desert, it seemed yesterday was the best day for this.  I headed out before fixing lunch, which I don’t often do- and found myself at the empty parking lot of Badger Springs Trailhead, some twenty minutes later.

I stopped and sat on a rock in the gas company’s line field, and finished off a “lunch’ of trail mix, then headed on down the trail into the Monument itself.  The first part of my journey followed a BLM road, up and down desert hills, for about two miles.  I was planning to hike around for two hours or so, then head back to town. 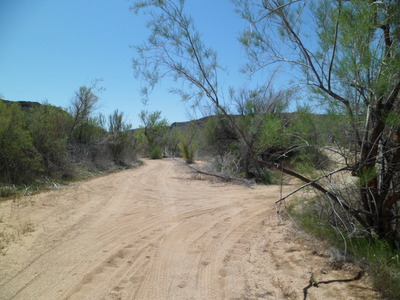 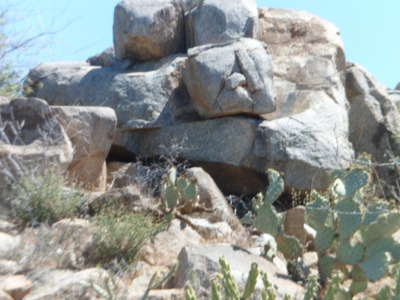 The landscape is full of white granite and limestone, leached by the intense summer sun, for thousands of years.

It is also the season for cacti to flower, so the hedgehogs were very accommodating; so, too, were the desert bushes, like the catsclaw. 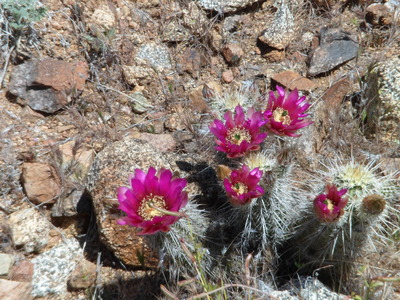 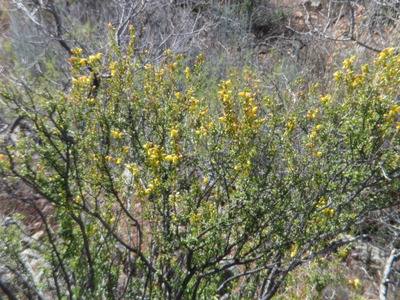 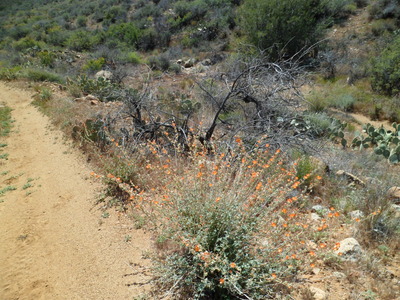 As I was headed up and over yet another hill, I heard a rustling on the trail behind me.  I was no longer alone, with the approach of E., who, it turns out, is a frequent visitor to these parts.  She had a light, almost ephemeral, manner, and offered to show me Badger Springs’ most amazing area:  The Agua Fria itself, flowing in earnest.  So, we backtracked and went down to a spot where the river which has given its name to the monument. 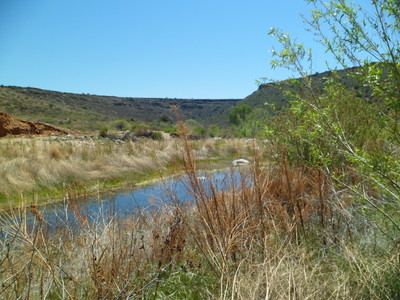 Coming to the conclusion that the intervening marsh land would not make for a pleasant walking experience, we headed further west, to the actual Riparian Trail.  Along the way, we were greeted, briefly, by a bull snake, which hightailed it back into his hole, after checking out the “threat’ with his tongue.

Other than a red-tailed hawk, the snake was our only vertebrate companion for most of the afternoon.  We came upon these scenes, once reaching the river.  There are petroglyphs, just before the river itself. 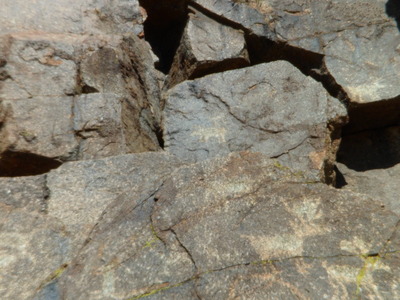 Then, the Agua Fria reveals what made Bruce Babbitt work to get this area designated as a national monument, in the first place: 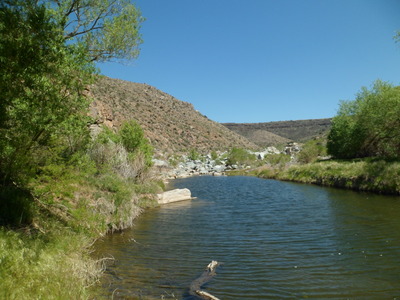 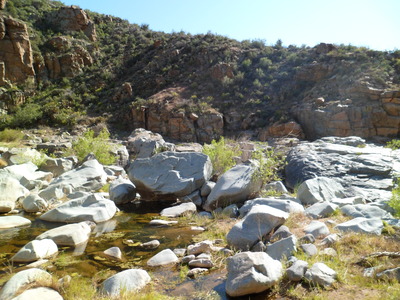 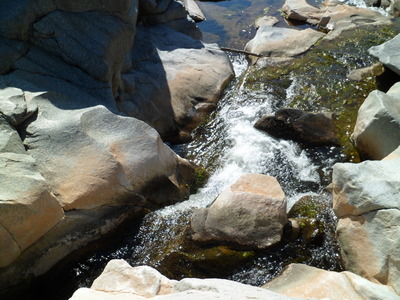 After we took off socks and boots, rolled up our pant legs and enjoyed the cool water  for a while, we sat on a limestone boulder which has brought E. great comfort in the past.  She has spent many hours with this rock, and contemplated its story:  All the people who have sat, laid or just stepped on it; the ants who crawl over it, in search of tidbits; the weather and water it has endured. For the next ninety minutes, we sat and discussed just about everything under the Sun- our life experiences, her metaphysical beliefs, my faith, Christ, Baha’ullah, Quantum Physics, ectomorphs and endomorphs (She is the latter, and I am somewhere in the mesomorph range), her career as a hairdresser and mine as an educator, my life with Penny, and our respective child-rearing experiences.  I realized that my conversations with people, of late, have been getting much longer and more intense, but also much more mutually satisfying.  So it was yesterday afternoon- just two souls, appreciating the joyous day and our surroundings. Her purpose, E. said, was to seek after truth, and so we did.

The surroundings got even better still.  After another ten minutes of boulder hopping, E. led me to the Agua Fria’s piece de resistance. 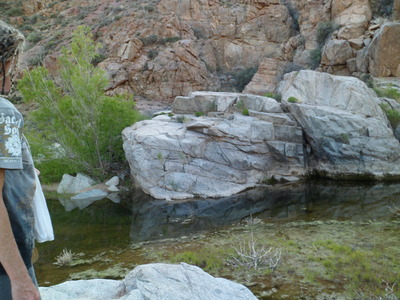 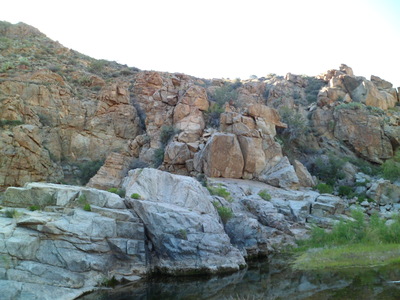 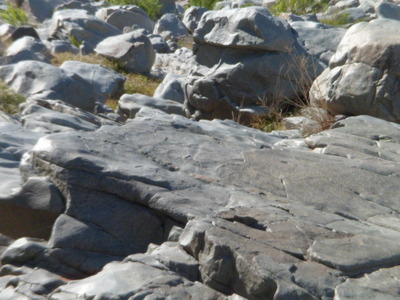 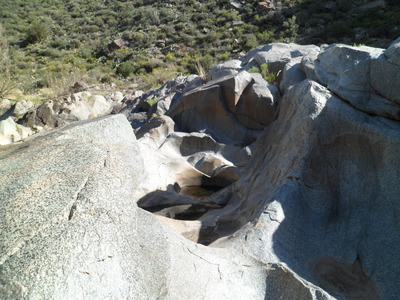 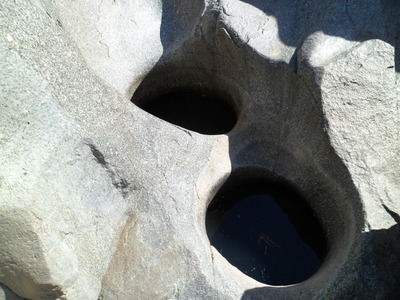 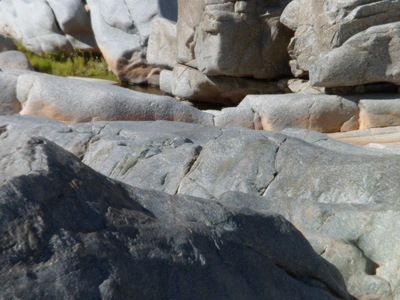 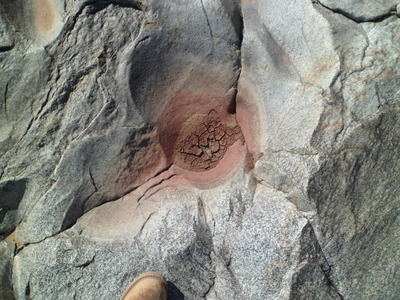 This led to another forty minutes of discourse, by which time, we found the after-school and after-work visitors arriving, jumping in the cool water, as we had earlier, and, up on the mesa above, engaging in rifle practice, though thankfully not aiming at any of us below.  Two hours had turned into four and a half, and it was time to head back to the cars.  The delightful afternoon began and ended with a hand shake.  There were no exchanges of e-mail addresses, phone numbers or future meet-ups.  The afternoon was far too meaningful- and the surroundings much too blessed.

2 thoughts on “White Boulders and A Seeker of Truth”