I could have kept going a bit longer, on Friday night, but Comfort Inn’s cold-as-ice desk clerk (refugee from the Welfare Office, much) didn’t mess me up. I had a nice breakfast, got laundry done and the morning crew were great guys.

I got to Quanah by mid-morning.  The town is named for the Comanche chief, Quanah Parker, whose mother was actually a white woman captured as a child by the Comanche, and raised by them as one of their own.  It is said she was the inspiration for Kevin Costner’s character’s love interest in Dances with Wolves.

Quanah never saw his mother after he was nine years old.  This was part of the impetus for him to carry on a concerted conflict with white settlers and the U.S. Cavalry, which ended with the Army, under Col. McKenzie, slaughtering the Plains warriors’ horses, and Quanah giving up the fight.

He quickly adopted mainstream culture, becoming a successful farmer and merchant, and encouraging other Plains Indians to do the same.  Geronimo emulated Quanah, after he, too, felt the tide becoming overwhelming.

Quanah is also remembered as an advocate of the Vision Quest, which, he taught, should be   enhanced with ceremonial use of peyote,  a hallucinogen about which he learned from Mexican Native peoples.  He is seen by many as a founder of the Native American Church.

In any case,  I am somewhat fascinated with Chief Quanah’s life and legacy, so I spent an hour or so in the small museum.

This is the high school, also named in Quanah Parker’s honor.

Below is Quanah Routes Museum

The museum also commemorates area veterans, and astronaut Ed Givens, a native of Quanah, TX, who would have been the first man to walk on the moon, had he not died in a car accident in Houston, two years prior to the launch of Apollo I.

There are also collections of memorabilia from the early part of the twentieth century, on up to the fifties. 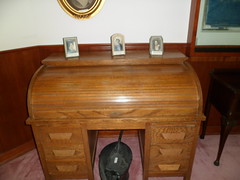 A calculator, from before the days of “apps”.

There is much to be learned from the life of Quanah Parker, especially about resilience and adaptation.  There is also much to learned in small towns like Quanah, about preservation of both small items and large legacies.

After I left Quanah, I drove a few miles east, to Chillicothe, and found this little prairie gem: 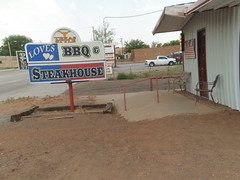 Love’s Barbecue, for those who do.

I had a delectable two-meat combo (Brisket and German sausage, with fresh sauerkraut, cole slaw and meaty beans.  I did have UN sweetened tea, but that was balanced by the decadent sin of Pecan Cobbler.

2 thoughts on “Texas, Day 2: Panhandle to Prairie and Quanah’s Land”

Sharing encouragement for others, you are not alone here.

Sunny Daze Ahead (Probably)
Virtual Assistant 24/7
www.swervedesigns.co.za/
The Only Football