At a few points along my journey, I have found myself standing in awe at the spiritual energy I felt, in what some call a vortex.  At others, I have stood still in reverence and respect for what has happened there, to innocent people and freedom fighters alike.

The University of Texas at Austin is one of the latter such places.  On August 1, 1966, an ex-Marine named Charles Whitman, in the throes of an advancing brain tumor called a glioblastoma, killed his wife and mother at his home, went to the University of Texas Main Building, climbed up the clock tower and opened fire with an assault rifle.  He killed 15 people, in and around the tower, before Austin Police Officer Houston McCoy shot and killed him.

This has always stuck in my mind as an act of domestic terror.  The Texas Tower has  a place in my heart, as hallowed ground.  So, on Monday, May 21, this is where I concluded my visit to Austin. 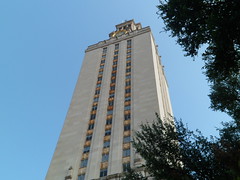 Forty-six years later, UT @A has long since reverted to the ways of a community that is secure in its freedom.  University students do college-type things, like study hard, party, and play sports.  The Longhorns are one of college football’s most celebrated teams.  This is their stadium. 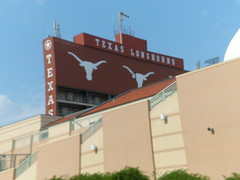 Someone recommended I take in Austin’s natural beauty on a future visit.  That is certainly something I will keep in mind.  Near the campus, there is a small creek that symbolizes the people’s interest in nature.  Here is a glimpse of Shoal Creek, a tributary of the Colorado River of Texas. 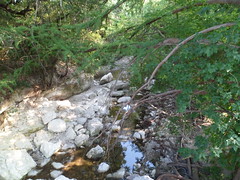 The true natural beauty of Texas is plentiful in the Hill Country.  That is where I headed next, after dealing with one of Texas’ few road-raging hotheads at a 7-11 gas station.  (18-years old and wanting everything done two weeks ago.  At least she wasn’t packing heat).

Day 5 found me at Pedernales Falls, Luckenbach and the LBJ Ranch.  Stay tuned.