I recovered nicely from the long drive yesterday, thanks to the restful night I had at Town & Country Motel, in Fort Stockton.

The Chihuahuan Desert region supplants the Permian Basin around these parts, and is just as arid.  Yucca is a dominant succulent here,and many of the same cacti as are in the Sonoran Desert, further west, have found their way here also.

The sere beauty of the Davis Mountains cannot be overlooked. 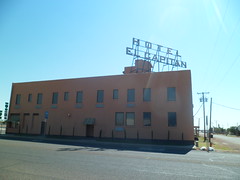 The town is named for an Army lieutenant, James Van Horn, who fought the Confederates in 1861.

I continued, after about a half hour, to Sierra Blanca, which is named for a local mountain range. 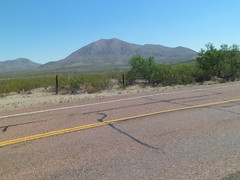 Our Lady of Miracles Mission graces Sierra Blanca, the town.

The last metro area on my itinerary was El Paso- Las Cruces.  Despite it being a Sunday (5/27), I found El Paso relatively busy, streetside.  I did not remain in this anchor of West Texas for very long, as Phoenix was in my sights for the evening.

Still, here are a couple of scenes of this interesting city, worth 1-2 days’ visit, by itself.

Here is Mt. Franklin, “The Southernmost of the Rockies”.

As one heads towards downtown, St. Patrick’s Cathedral presents itself.

El Paso has a couple of Spanish missions that invite visits, but for now, I will be content with a view of downtown. 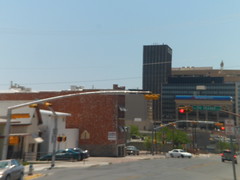 I needed a place to indulge in the last of my summer sausage and fruit, so I stopped about an hour west of El Paso, in the old Spanish market town of Mesilla, just south of La Cruces, NM.

Mesilla remains a popular market for Las Cruces area residents.  Its centerpiece, though, is the Church of San Albino.

Across from the church, there is a gazebo, where an older couple was singing traditional northern Mexican songs. 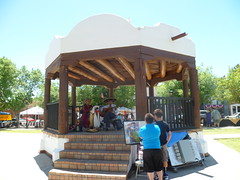 Whatever your needs, though, there is something colourful in a traditional  New Mexican market town, for everyone.

The long, sweet Texas journey was over.  I drove over the mountains of western New Mexico/eastern Arizona to Phoenix, enjoyed a hearty meal and camaraderie at Texas Roadhouse, in the Metrocenter area, and rested comfortably at Premier Inn.  Memorial Day found me at Penny’s grave site and then heading back to Prescott, for a “don’t blink” week or so, before my second Southern California trip of the year.

A practical guide to budgeting.