In this case, it was San Diego, June 6, 1982.  Our wedding photos were taken in the garden of the San Diego Baha’i Center, while the usual Sunday morning faith activities were conducted.  At 1 P.M., I was allowed in, to set up for the beginning of Penny’s and my life together.  At 2 P.M., my mother-in-law sang a wedding song, while Penny and her dad walked down the rose-petal strewn aisle.  She wore white and I, a black tuxedo.  That was about as traditional as it got.  My father read a selection from the Baha’i Writings and my mother, from the New Testament.   We exchanged the simple vow “We will all, verily, abide by the Will of God.”, and our rings.  The Secretary of the Spiritual Assembly of the Baha’is of San Diego certified our marriage, and we began the real business of growth into a unit.

After a Persian musician played a lovely piece on a santour, we welcomed our 50 or so guests into the reception hall, and all enjoyed a buffet meal.  Around 3:30, a couple of men walked in, looking for the regular Sunday afternoon meeting.  They received a warm welcome, a free meal and some explanation of Baha’i marriage.  Then, my siblings-in-law tied tin cans to the back of our car, we had some confetti thrown at us, and our parents shooed us along on our honeymoon.  I think I drove about 50 yards or so, then stopped and removed the trail of cans- to a chorus of groans. 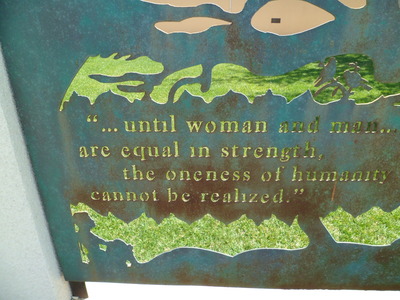 This, my friends, remains true, 30 years later- and will be true for all eternity.

I visited the San Diego Baha’i Center last Wednesday, as part of a thirtieth anniversary.  It was closed, but I contented myself with meditating on the quotations such as the one above, which are mounted at the garden’s entrance.

The previous night, I went with Aram to Filippi’s Pizza Grotto, which was the first place I ever ate in San Diego, in March, 1979.  Now, as then, la cucina si bellissima!  The family has now established a chain, along the California coast- at least there are “branches” in South Beach, in Jacumba and in Napa Valley- probably elsewhere in the Golden State.  Anyway, Penny and I had a nice meal there in January, 1982, when we went whale watching.  I had to throw that in, now back to the narrative.

Penny had  yearning for beach camping, our first night, so we headed to South Carlsbad State Beach- in time to meet a crowd of beach regulars who were gathering grunion.  We were given about a dozen to put in our cooler, and we prepared them two days later, as Penny had to return to work for the last three days of school.

Beach camping offers a special form of camaraderie, and all get enthralled by sundown and sunup, alike. 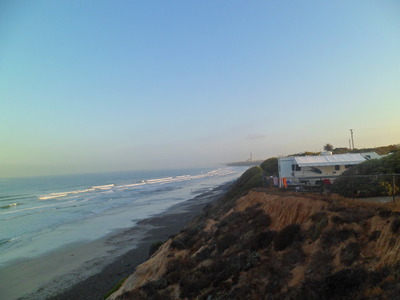 We spent our second night together at Julian Hotel.  The honeymoon suite is a cozy affair.  I lit a nice fire in the fireplace that night.  The Julian is still very much a presence downtown, and now has a Bed and Breakfast aspect, as well as the traditional overnight stay. 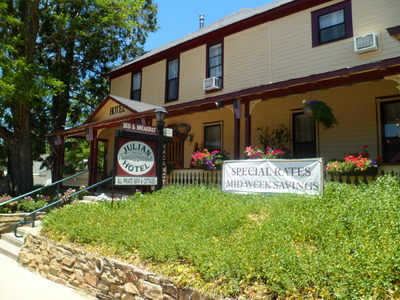 The last day before we left, we walked around town during the morning, enjoying lunch around noon at Julian Pie Company. 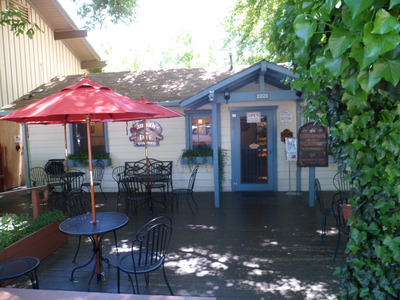 After one last long look at the mountain scenery, we left for Tuba City, AZ, and our first four years together in service to the Navajo and Hopi children. 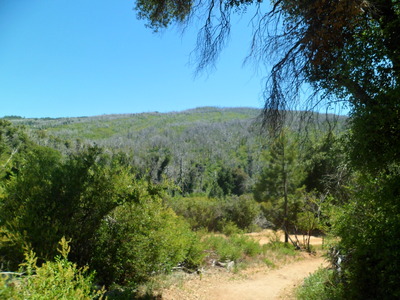 Tuba, as those who knew us when will attest, was our laboratory for marital and personal growth.  Penny learned delayed gratification about some things and I learned that not every mistake I made was the end of life as I knew it.  I also learned that being a man did NOT mean fixing every problem that arose, but processing together, so we could get a better solution.  That last one took me until our son was born, to really figure out. 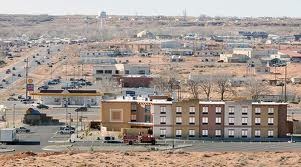 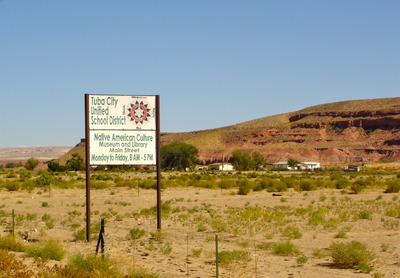 Does the high desert look like a good place to grow together?  For us, it was. (NOTE:  These photos are file photos, from the Navajo Times.)

A late night phone call, answered by a tired yours truly and confirmed by my equally tired wife, led to first her getting a job at Cheju National University, in South Korea’s island southwest, in Fall, 1986.  I got my job there, after a fashion, in March, 1987.  Our son, Aram, began his life there, in July, 1988.  We stayed, in a struggling, but exquisite, semitropical environment, until March, 1992.  (Photos below are file photos, from Google Earth and the Korea Ministry of Tourism.  The last photo is a self-portrait by Imstress.) 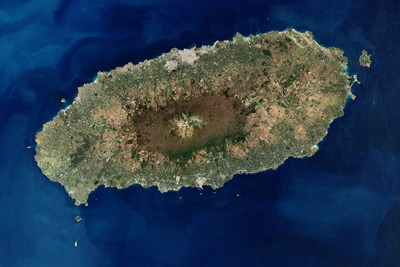 Cheju has all the things that make Korea great, and beautiful:  Shoreline, mountain, ancient culture- and vibrant, beautiful people.  T 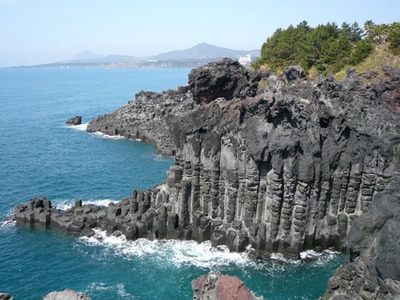 Volcanic beach on west side of Cheju.

Summit of Halla-san, the highest peak in South Korea. 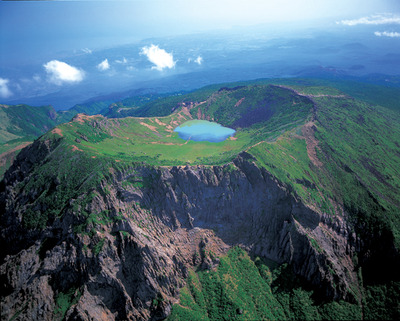 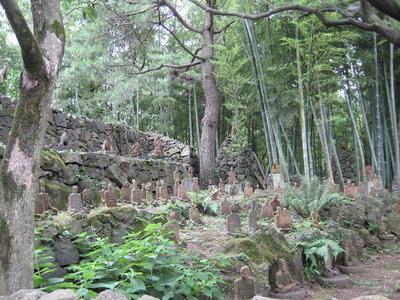 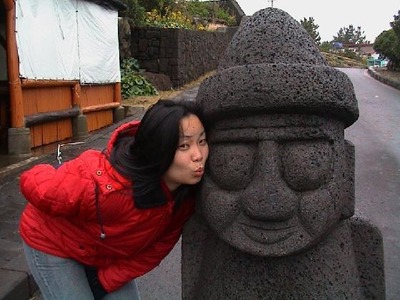 Penny’s folks knew us well enough to realize that we might well have stayed in Korea until Aram’s maturity.  He is their only grandson, and thus the pleading and their emotional stress brought us back to Arizona.  We spent the next seven years in and around Jeddito, a small Navajo hamlet that provided a school for rural Navajos and Hopis, replacing an older school in nearby Keams Canyon, where Penny had taught in 1980-81.  Aram was friends with a fair number of Native children, but on terms dictated by their emotionally hurt, and sometimes angry, elders and older siblings. There is where he got a sense of the cost of Man’s inhumanity to Man.  There is where it was made clear why we need the unification of the human race.

(These photos are also file photos of the Navajo Times.) 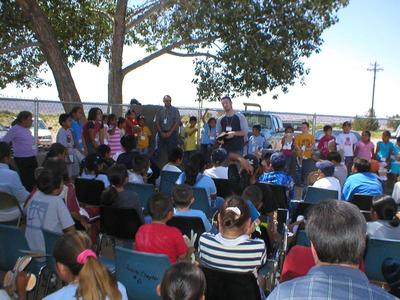 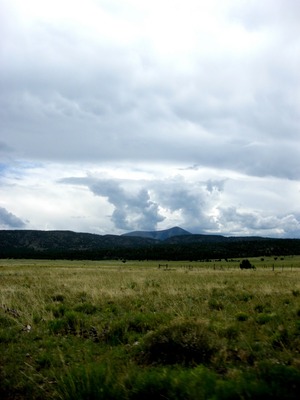 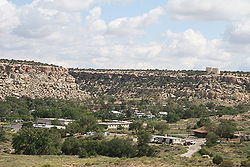 As Aram grew into middle-school age and Penny started to show health problems, we moved closer to the metro area of Phoenix.  I served three years as a school principal, in three different locations.  In the end, Money-Politics was on the mound, and I struck out.  Penny and Aram learned Tae-kwon-do, she began a series of naturopathic treatments, primarily with a traditional Chinese acupuncturist and herbalist, who doggedly kept her alert and productive until 2010, when the neurological ravage known as Polyglucosan Body Disease began to get the upper hand and she had to be placed in a rehabilitation hospital.

From 2001- 2006, she was able to work a fair amount of wonder, with her students in the West Valley town of El Mirage. 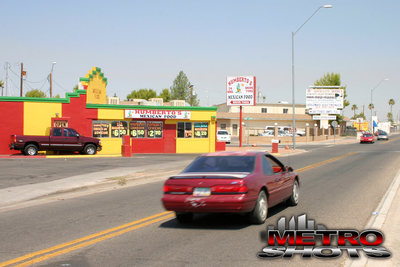 I was pretty much on call, working as a substitute teacher in a couple of school districts, but mainly being ready in case Penny had an emergency.  When she was no longer able to work, she reverted to working on yet another Master’s Degree- this one in Educational Technology.  She never did get to put it to direct use, but it kept her on track for another four years- and she mentored younger women at Arizona State University- West Campus.  Here, I must thank Dr. Michael Desvigne and the staff of Trillium Specialty Hospital, for their gargantuan efforts at largely overcoming the ill effects of Penny’s four years in a wheelchair. 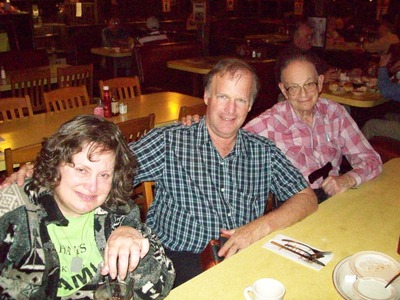 She was released from Trillium, largely healed of her pressure wounds, in November, 2010.  Other infections took root, though, and by February, 2011, she went to her last place of residence- Odyssey Hospice.  On March 5, 2011, her spirit contacted me at 6 A.M., saying it was time.  As Aram and I pulled into the Odyssey parking lot, a small gust of wind blew upwards from the ground, in a spiraling motion.  I found her physical frame, lifeless for about three minutes and still warm, waiting in her bed, for a dignified burial.  This we, her loved ones, did for her on March 9.  As she was the spouse of a veteran, her body went to its final rest in Arizona Memorial Cemetery.

We traveled alot together, as this 1984 photo of Penny in Guyana will attest.  So, it’s no wonder her spirit has set me on several journeys, last year and this. 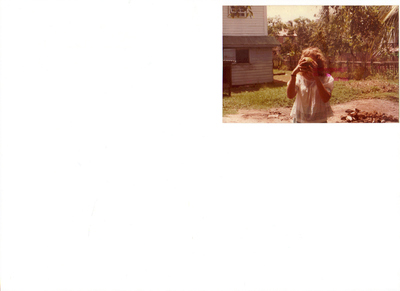 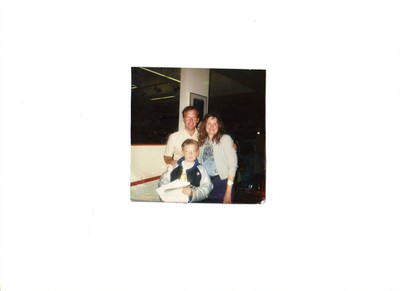 We were a hard-working, struggling and sold little family.  In many ways, Penny beat her demons-especially the external ones.  She helped me greatly in confronting and beating mine- especially the internal ones.

I have been moving on, outwardly alone, but knowing she’s right alongside, 24/7.  I’ve made many friends since last Spring, and am glad for being able to give and receive friendships with people of both genders, all ages and a wide variety of backgrounds.  As I mentioned in my last post, if and when I meet another special person, it’ll seem, the way it did with Penny, to happen out of the blue.  There was no force or contrivance, either way, between us- it just was.  So, too, will it be next time.  I am not afraid of either being “just friends” with women, nor of meeting someone with whom I can share the rest of my life- but it has to be a mutual feeling.  I am, solidly, for the time being, on Square One.