Growing up on the North Shore of Massachusetts Bay, I have been mesmerized by the history-oriented culture of places like Boston, Cambridge and Salem.  To be sure, my own hometown of Saugus had a hand in this.  Our Ironworks was the parent of the American steel industry.

During my recent, Thanksgiving-oriented visit “up home”, I made it a point to revisit some of my favourite sites in Salem, as well as to re-walk  Boston’s Freedom Trail from the point where I left off in September, 2011.

In today’s post, I want to pay homage to the “Witch City”, and share my visit there, of November 20.

Taking an easy bus route from Saugus, through Lynn, I arrived at Salem’s Chestnut Street, in the heart of the 18th Century McIntire Historic District.   It’s named for Samuel McIntire, who built many of the homes that are still preserved in this exemplary neighbourhood.

The first place I visited in the McIntire District was Hamilton Hall.  It is so named because Alexander Hamilton frequented the house when he visited Salem.  Unlike the colonial-era homes which McIntire built, this Federal-period classic was clothed in brick.

Its interior is suitably ornate, befitting the nation’s first Treasurer.

After leaving the Federalist era, I jumped backwards in time, to Salem’s Days of Infamy.  The Witch House, at the edge of the McIntire District, predates Samuel, but shows the full story of the religious persecutions and the mass hysteria which led to them, in late seventeenth century Salem- and a few nearby towns. 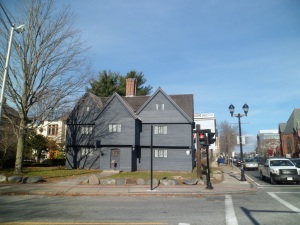 Due to the delicate nature of the furnishings, photography inside the Witch House is discouraged, as is of course handling of the various artifacts.  What is ironic is that it was the home of the Witch Trials’ presiding judge, Jonathan Corwin.  The structure is the only house remaining in Salem with direct ties to those dark days.  There are numerous other places in the downtown area with exhibits of witch memorabilia.

Salem has two other historic periods in which it played an important role:  The Clipper Ship Era and the Industrial Age.  Several tanning factories and some heavy manufacturing facilities were located here, in the 19th and 20th centuries.  Salem’s port was a rival of Boston’s, until the mid- 19th Century.

The economic boom enabled Salem to build impressive public buildings and places of learning, like Salem Athenaeum, which still exists as a private library.

The County Courthouse and Salem Town Hall (now a city museum) are shown below.

After a satisfying lunch at Nick’s Firehouse, I revisited the Peabody Essex Museum, behind the old Town Hall.  I was last there in 1965, when a grudging curator let my three siblings and me walk around the Maritime exhibit, unsupervised.  He made no pretense of liking children and teens, but I found the exhibits fascinating.  They still are- although no photos are allowed there, either. 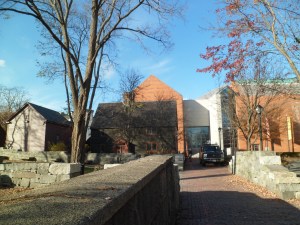 Nonetheless, the Museum is now popularly called “The PEM”, school groups are welcomed- even by the eldest of  docents and the Museum involves itself fully in community life.

After ninety minutes of studying paintings, household finery and marvelous Chinese ceramic ware and figurines, I headed to the brisk open air of Salem’s waterfront.  Here are the great wharves, Salem Neck, Cat Cove and all that brought wealth to the city, during the Clipper Ship Era.  The scene is preserved as the Salem Maritime National Historic Site. 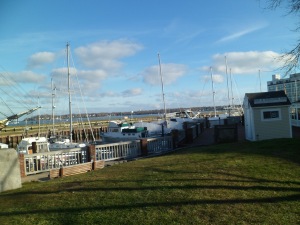 Above is the SS Friendship, a restored clipper ship, open to visitors during the summer months.  Below left  is Salem Neck.  To the right is a shore view of Derby Wharf, built by one of Salem’s most successful mariners:  Samuel Derby.

At the end of Derby Wharf lies a short lighthouse, which once guided tall ships and fishing boats into Salem Harbor.

Overseeing it all, for nearly five decades, was Salem Custom House, now part of the Historic Site.

The New England Literary Renaissance was represented most notably in Salem by Nathaniel Hawthorne.  His “House of the Seven Gables” is a real place, of course, and one can still climb the steps in back of the fireplace, under the watchful eye of a tour guide.  As ever, photography is not allowed inside the house itself.

I was, however, able to photograph the Counting House, both inside and out.  This 19th Century office space underscored Seven Gables’ maritime importance.  Properly called Turner-Ingersoll Mansion, the house was important to Hawthorne in real terms, because his older cousin, with whom he was very close, was an owner of the mansion during Hawthorne’s teen years.  His own birthplace was moved from the downtown area to the Mansion grounds.

Here are the exterior and interior ceiling of the Counting House. 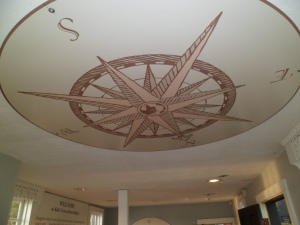 A view of Salem Neck is in order.

Lastly, here is a peek at Nathaniel Hawthorne’s birthplace.

Salem remains, in my heart, one of the classic American cities- always worth a “pilgrimage”.

2 thoughts on “Bewitched By History- My Salem “Pilgrimage””