June 9, 2014- From 1986- 1992, Penny and I lived and worked in the South Korean island province of Jeju.  We both trained English teachers.  Our son was born there, and so the affinity for Korean people and culture has stayed with us.

As I got back to Pontorson, to catch my train to the Breton capital city of Rennes, (pronounced “Hren”), I encountered a young Korean lady, who was looking for a train/bus schedule.  She was headed for Rennes, and from there, she had to go to the airport in Nantes, a city about an hour or so southeast of Rennes.  My train would have gotten her to Rennes with about 90 minutes to reach Nantes.  That would have put her at the airport one hour before her flight.  I asked where she was from in Korea, and it turned out, she was from Jeju!  Once we made that connection, a bus came that was headed for Rennes, so she hopped on and I had made another interesting, but ephemeral, connection.

I already had a train ticket, so I stayed behind, for another hour and had pizza and rice pudding at Pontorson’s only pizzeria.  The fare was actually agreeably light.  Most pizzas in France are made with thin crust.  The train arrived around 4:15 PM, and I was soon on my way southeastward, to Brittany’s well-preserved and vibrantly cosmopolitan capital.  Rennes, like the rest of Brittany, has a bilingual element to it, but feels more continental than the communities further northwest.  Perhaps that’s because it is the only major city in the region that is inland.

I arrived in Rennes around 5:20 PM, and found that my hotel, De Bretagne, was directly across Place de la Gare from the train station.

The service was as fine as could be expected.  My computer battery died here, so my reports henceforth would come via Cyber Cafe.  My attempts to charge the device, both in Rennes and elsewhere in Europe, proved futile.  It took 10 hours of a 220 volt current to get this machine back from the dead, but that’s a story for later.  The bottom line is, aside from that, the staff at Bretagne were supremely helpful.  The high school girl who tended my room was extremely efficient, and the desk people had breakfast ready on the double, each morning.

Well, on with the show.  Avenue Jean Janvier and Square Kergus lay just to the west of the hotel. 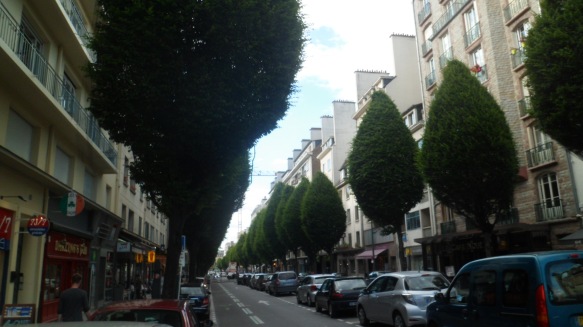 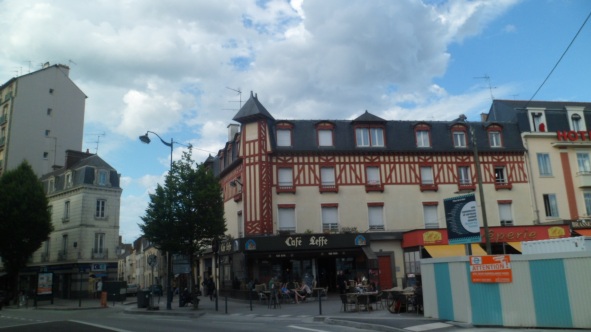 Most of the homeless and other street people are to be found on Rue Jean Janvier.  I was joined at dinner in Royal Kebab, by a trio of free spirits who pranced about the tiny restaurant and eventually ordered some emportee items, much to the relief of the stern Algerian owner.  One of the men resembled a young Kiefer Sutherland and the woman looked a lot like Natalie Portman.  They were a nice bit of comic relief, after I had pounded the cobblestones for a few hours.

Once I reached the canal area, I spotted the very modern Theatre National Bretagne, off to the right.

Although Emile Zola was a Parisien, and his life’s work was accomplished in the capital, he was, and is, highly regarded in Rennes, and across Brittany, for standing up for the downtrodden.

L’Acadmie Lycee Emile Zola is one of Rennes’ most prestigious high schools.  As it happened, the trial of Captain Alfred Dreyfus, who was defended in the press by Zola, was held here. 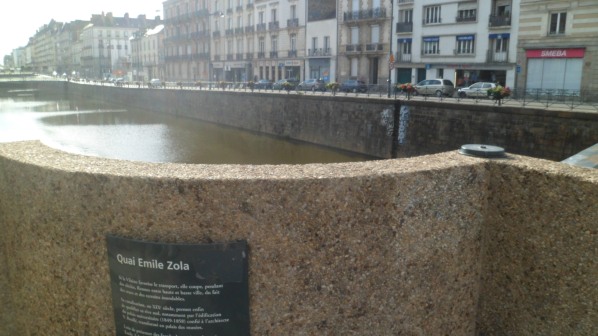 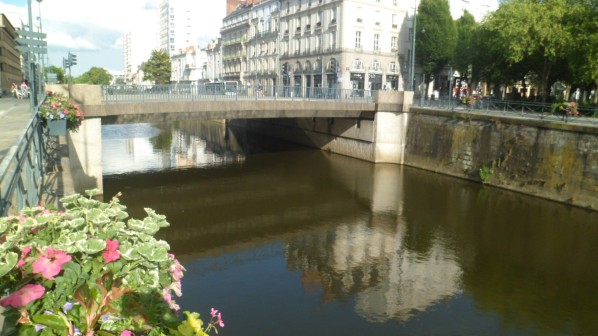 On the south side of this quay is La Musee des Beaux Arts.

It being Sunday night, the museum was closed, a fact that is a bit surreal, given that sundown here was close to 10:30 PM.

Walking further towards the city centre, at 8:00 PM, I spotted a congregation, and their priest, gathered outside L’Eglise Saint-Germain.

I aimed towards the spire, so as not to catch unaware parishioners in the camera cross hairs.

The central place of Rennes has three imposing structures.  Here is the Post Office building, which also houses Television Bretagnais.

A block or so to the south, the Opera House and Hotel de Ville (City Hall) share a square. 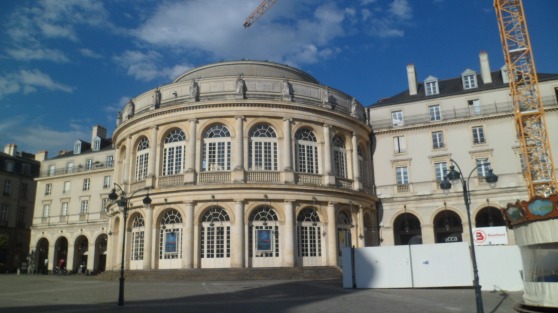 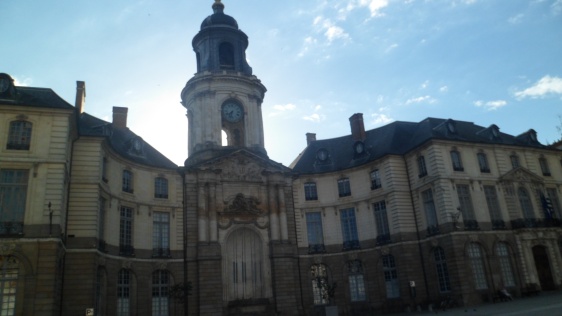 Rennes’ back streets are also arresting, in their own, rather Hanseatic appearance. 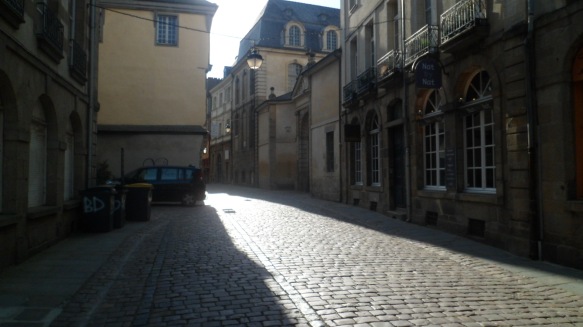 I did not get inside the cathedral on this visit, but the exterior offers a reason to pencil it in, on a future sojourn. Here we also see La Place de la Cathedrale.

My attention was thoroughly captured next by La Porte Mordellaise, by the ensuing Roman-era ramparts, Les Murailles, and by the fortress from the days of Amorican Romans, who resisted both the Bretona to the west and the encroaching Germanic Franks, coming from the east and north. 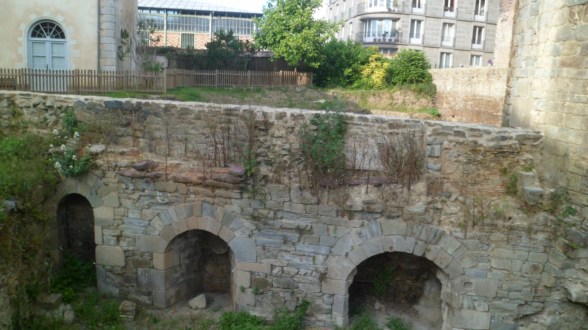 I must have been on or among the ramparts for close to an hour, this being my first real exploration of Roman ruins.  Of course, the upper levels were definitely Frankish, but were equally impressive.

My evening ended with a quick view of the Parliament of Brittany.

I walked back to the hotel, past Place Motte and Palais St. Georges, but more on them, next post.