June 9- 10, 2014-  There is no place on Earth more stimulating, energizing and thought-provoking than the peninsula that juts forcefully out into the Atlantic, from the rest of France.  Brittany has many, among its residents, who would as soon it pointed hard enough so as to separate from the mainland, and move northwestward, joining their kindred in the west and north of the British Isles.

The departments that make up Brittany are the most fully bilingual of all the north French regions. They are every bit as aesthetic as the rest of France, but have that edge- the separate culture, that requires attention and respect, in addition to that which one shows to France-at-large.

I began this day with a lovely walk past Place Motte, to Jardin et Palais St.- Georges.  The public gardens of Rennes are impeccably tended.  Jardin St.Georges  fronts the former Benedictine abbey called Palais St. Georges.  It is one of Rennes’ most popular city parks.  The Palais is now Rennes’ Fire Headquarters, yet is maintained as an historical monument. 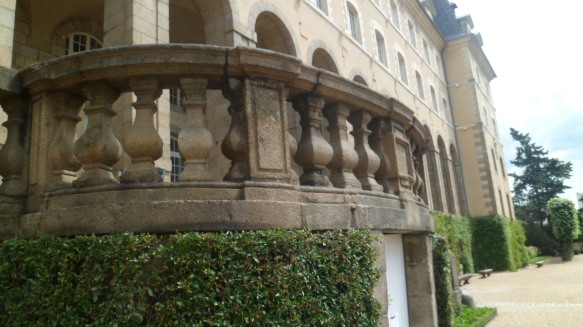 My one regret was not getting back to Cathedrale Saint-Pierre, but it was time to board the train to Vannes.  I packed my dormant computer, and other accompaniments, and headed across Place de la Gare.  Once I found my gate, we waited a bit while an elderly lady, who had fallen and hurt herself rather severely, was treated by EMT’s and taken by wheelchair to an ambulance.  These matters are handled well in France, and in the other countries I visited as well.

Our route took us through Dol-de-Bretagne,

and Redon, a crossroads which has the same Latin root to its name as Rennes. 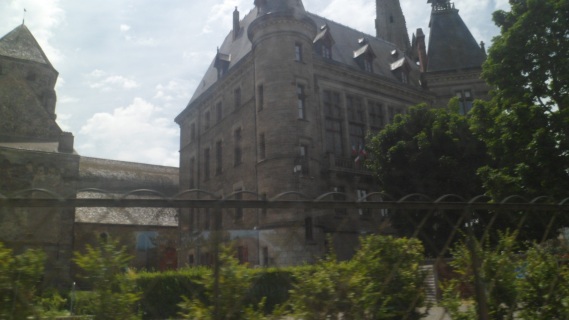 We  arrived in Vannes, on a body of water whose Breton name is straight out of Tolkien:  Morbihan.  The Gulf of Morbihan sweeps the southwest corner of Brittany, and laps at some true gems- Quiberon, Belle Isle, and Carnac, of which I will say much in the next day or so.  Vannes, however, is a gem in itself, and required every bit of the time  which I allotted  it.  The scene below is just west of the train station.

My hotel, Hotel de France, is not far from there, on Avenue Victor Hugo.  I will recommend this establishment, without hesitation. The Business Center was at my disposal, day and night, and the manager, who lived on the premises, was supremely helpful, as were his wife and the assistant manager.  Then again, all Vannes seemed to be bending over backwards for the visitor.

I took enough photos to fill several Flickr books, but will confine myself to  a dozen of the highlights of the inland areas of this amazing city.  In the next post, I will focus on the waterfront.  Here is Avenue Victor Hugo, headed towards Centre de Ville (City Center).

The Bell Tower features prominently in all major European cities. 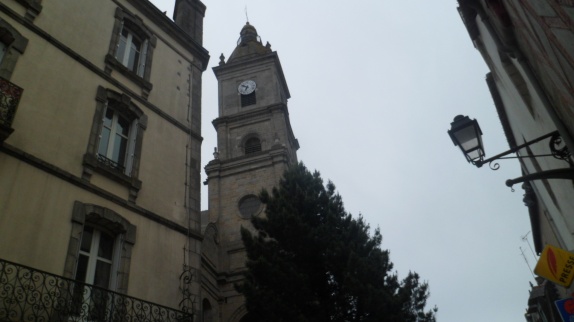 Here’s a bit of colour, for a pleasant morning.

One enters Centre de Ville through La Porte de Prison, which was exactly what it implies, in the days of the Duke of Brittany. 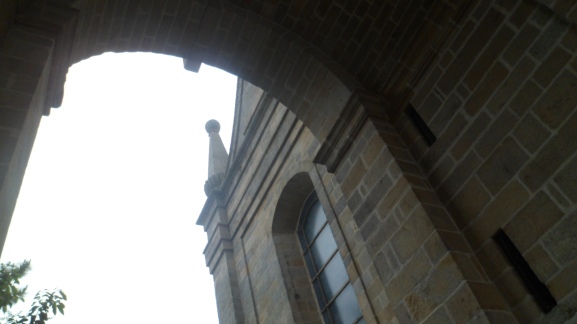 Today, however, it was quite festive, as there were celebrations of D-Day, still being marked.

I walked around Cathedrale St. Pierre, closed for renovation. 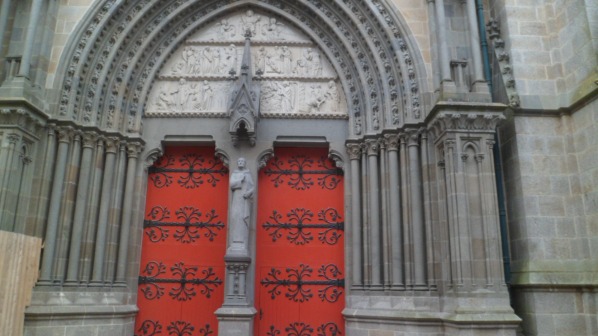 Here is St. Emilion, the patron saint of vintners, and of Vannes. 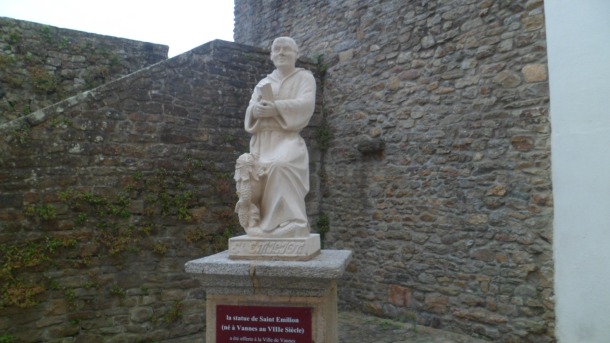 The ramparts of medieval Vannes were more than glad to accommodate, and captivate.  These walls were a major defense for the town, from the Third Century AD, onward.  Pirates, Vikings and various raiders from Spain and elsewhere were ever a concern, along this strategic southern coast of Bretagne.  The ramparts are extensive and still formidable. 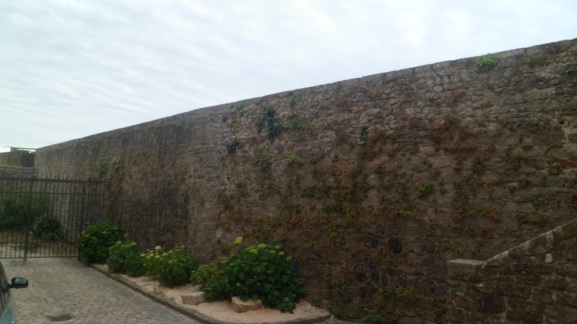 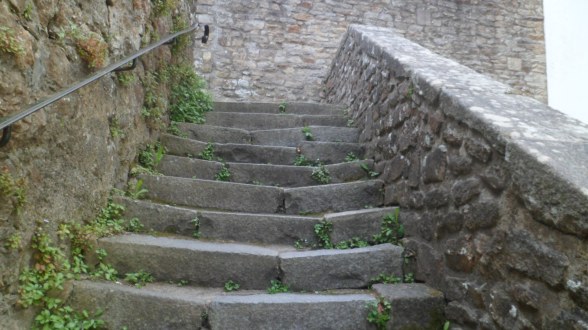 Looking down at a garden exhibition, I half-expected the Red Queen to come out shouting, “Off with his head!” 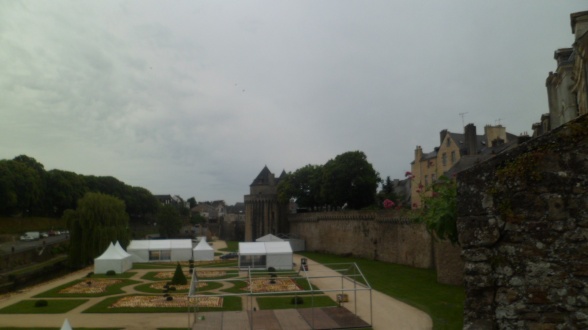 There were more ramparts, a long viaduct, and hints of just how formidable this tough old port really was. 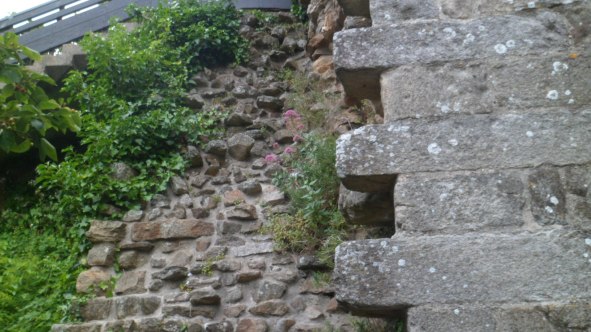 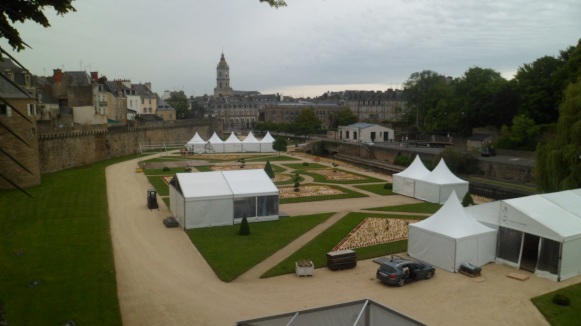 I walked past the moat, and up another hill, to Vannes’ memorial to the heroes of World Wars I and II. 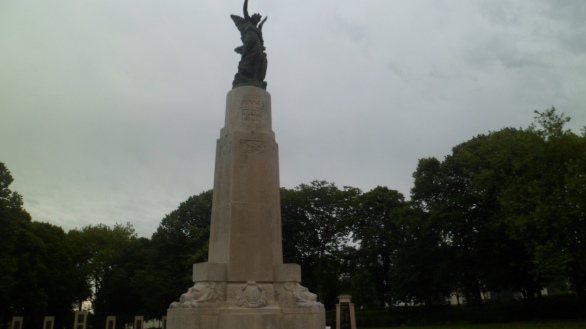 I was close to the shore, but that was a matter for the morrow, and so is the next post.

5 thoughts on “An Eastward Homage, Days 14 and 15: A Tale of Two Small Breton Cities”