June 23, 2016, Eagar, AZ-  I have been helping to staff a Red Cross shelter, in this small eastern Arizona town, for the past two days.  Those who are here, have come because of respiratory issues.  The smoke from the Cedar Fire, a human-caused forest conflagration, has been more of a problem than the actual blaze.  Few, if any, structures have been affected by the fire.  The school where we are housed is well away from the blaze, of course, as is the school in the Painted Desert town of Holbrook, where a second shelter has been opened.  The concerns now are smoke and flooding, once the monsoon rains come, in earnest.  We got a foretaste of the latter, last night, when the parking lot outside our staff motel got about twenty minutes’ worth of shower activity.

The other day, in between beach visits in southern California, I spent about forty minutes walking in the western lagoon area of San Elijo Lagoon Natural Reserve, in Cardiff-by-the-Sea, north of San Diego.  A brackish water lagoon is also a shelter.  Both marine animals and desert mountain creatures find a safe haven.  The lagoon is, however, a tenuous place of refuge.  Given its location near various industrial areas, there is always a balance to be struck between the natural filtering that water plants offer and Man’s perceived need to generate waste, in the name of “prosperity”.  Brackishness has a long way to go, in being appreciated for what it offers the balance of nature.

Thus, San Elijo’s lagoon is a vital educational tool.  Here are some views of the western portion of this extraordinary refuge. 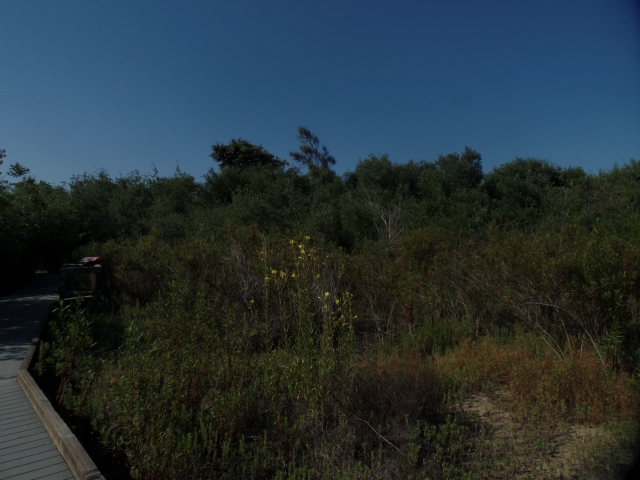 Thick vegetation is needed, to help filter out toxins.

Several channels converge in the lagoon, en route to the sea. 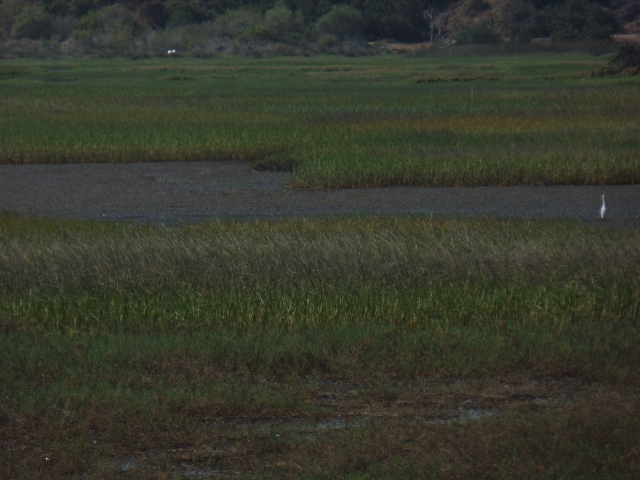 A lone egret was partaking of the solace, this morning.

The channel on the right has cut through to the ocean.

The Kumeyaay people, now also called Diegueno or Luiseno, had simple, temporary dwellings, when they came to the lagoon to gather fish, crustaceans and kelp.

Here is a view of the ocean-bound channel, from the Visitor Center’s second-floor observation deck.

The eastern section of San Elijo Lagoon Natural preserve lies east of Interstate 5, in the community of Encinitas.  It’s an area best enjoyed in the coolness of Fall.  I may well stop and investigate the emerging channels and their hillside source, come October.

There are no real external shelters from one’s own struggles.  The only way, as was said in “The Empire Strikes Back”, is through.  I have been my own worst foe, in so many situations, that the aforementioned option has become my default.  There were two instances, in the past day or so, where my efforts at maintaining the shelter clashed with others, who were either not thinking things through, or were just worn out and seeking the path of least resistance.   The only thing I could do, in both cases, was quietly continue what I was doing, for the benefit of the shelter clients, while not pushing the confrontation envelope. Our manager has confidence in my judgement.  This is a continuation of what I experienced this past Spring, at Prescott High School.  It’s refreshing, actually, and indicates I’m doing something right.

I am grateful for many shelters.