After a lovely visit, yesterday evening, with one of Penny’s second cousins, I meandered through the interior of Maryland’s Western Shore and spent the night in the regional commercial hub of Lexington Park.  This morning, after enjoying a breakfast sandwich at Donut Connection, I headed towards the southern tip of St. Marys County, a spot called Cape Lookout.  It turns out to be a private community, called Scotland Beach. Nevertheless, there was a small turnaround area, where the residents look the other way, while a visitor takes a photo or two.

Point Lookout also has a state park, which I am sure is lovely, but it is cash only, so I headed back towards the town of St. Marys, which was Maryland’s first capital, in provincial days.

Point Lookout was a Prisoner of War camp, for captured Confederate soldiers, between 1862-65.  A memorial to those who died whilst incarcerated, stands just north of the state park. Although I have no sympathy for slaveholders, these were soldiers, and I paid my respects.

St. Marys is a lovely town, along the river of the same name. I stuck to the highway, as a bridge with hideous traffic was between here and Jamestown, and I wanted to get there by 1 PM, at the latest.

These scenes were taken across from the entrance to St. Marys College. 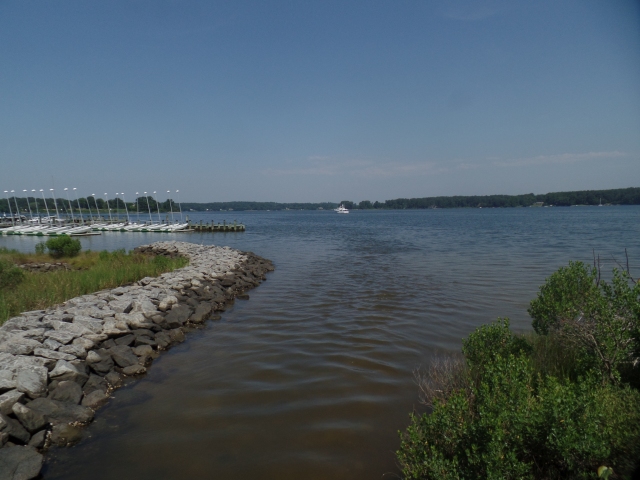 After spending forty minutes on the aforementioned bridge, and nearly being rammed by a vehicle whose driver was busy texting, whilst going 40 miles an hour, in bumper to bumper traffic, I enjoyed a rather pleasant drive through Virginia’s Upper Tidewater, and got to Jamestown around 12:40.

The entrance to Jamestown National Historic Park has 50 plaques, describing how each state came to enter the Union.

The Great Hall has several exhibits that detail Jamestown’s three early communities:  The Powhatan Nation, long-established here, when the settlers arrived; the English settlers, who began to arrive in 1607 and slaves brought from Angola, southern Africa, beginning in 1619.  There are examples of the homes and daily lives of each group, in various sections of the Great Hall.

The first section describes the lives of the Powhatan and their neighbours.  The house below is a typical Powhatan home of that period.

This is the inside of an early English hut in James Fort, as replicated in the Great Hall.

Model of ship used to transport goods and people, along the coast.

Once outside the Great Hall, it was time to get a sense of how the actual settlement looked.  Discovery Tower is the last remaining structure from the days when Jamestown was Virginia’s capital.   It was a church tower. 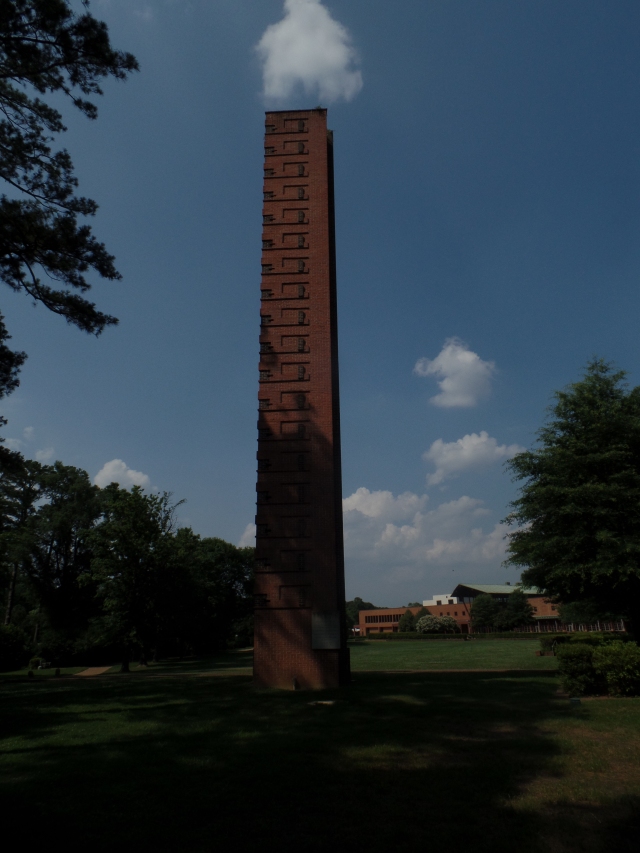 Visitors to frontier towns, up and down the North American coast. faced piked fences around the fortified villages.

Cannons were posted at various points along the wall’s mezzanine.  Spanish, as well as Indian, raids were a constant concern at Jamestown, as were attacks by pirates.

The thatching that was common, across the British Isles, became common in the early English settlements as well. 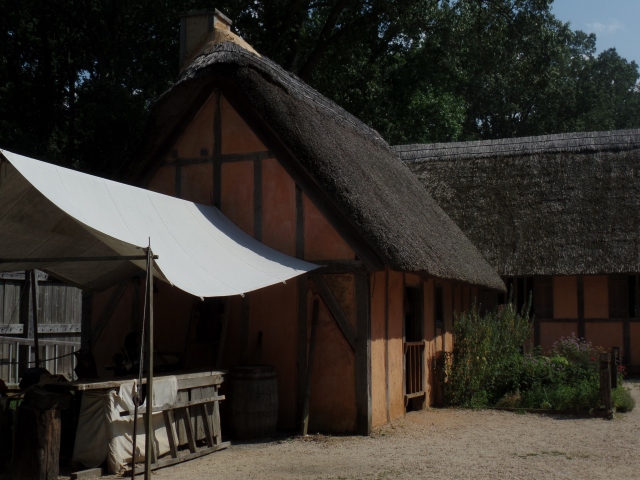 I visited several of the buildings.  This is the interior of the community church.  Unlike the later colonies in New England, Jamestown pledged fealty to the Anglican Church.

Here is the supply wall of the guard house.  Guards manned this fort, 24/7.

Here is the storehouse for the village.

These bells were rung by the guards, to alert settlers of danger.

In the Governor’s House, the governor’s manservant slept near the front door.

This was the Governor’s home office.

The Governor had some privacy in his sleeping area.

With my self-guided tour of James Fort complete, I walked towards the James River front.  A replica of an early dugout canoe lay above the shore.

The Susan Constant is a replica of the largest of a small fleet  of ships which sailed between Jamestown and England.

Imagine yourself manning this crow’s nest!

Here is a typical bunk for a crew member on any of the fleet’s ships.

As this grate indicates, humans worked in  a hold, under the main deck.

Here is what lies below deck. Yes, it was hot down there.

As it was getting close to closing time, I headed towards Powhatan Village.

Here is the interior of the Council House.

A more typical family house is below.  It appears this dwelling was the home of a prominent village elder.

This is the ceremonial circle. The posts represent the guardian spirits of the village. 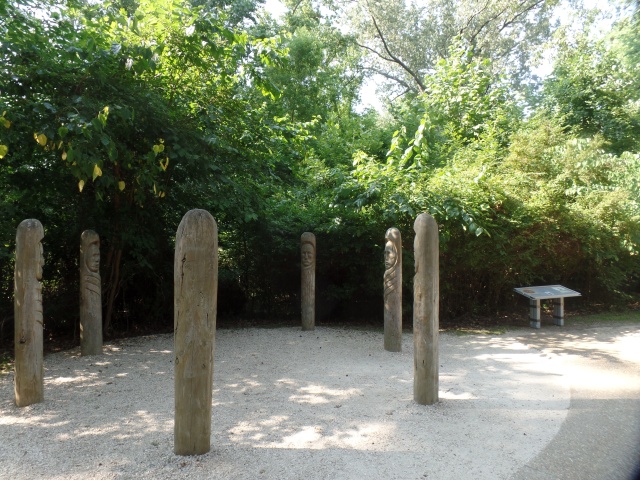 The staff was leaving, so I was as well.  I stopped for a view of the James River, just outside the park.

Like any replica of life in the mists of history, Jamestown is constantly evolving as archaeologists unearth more evidence from the dig site, a short distance to the north.

So, I checked off another place missed during our 2007 trip.  I’m sure even more discoveries would await, were I to return some years from now.  For now, I am headed to Williamsburg, for the night, and Yorktown, tomorrow morning.