Fort McHenry, in Baltimore’s outer Harbor, was one of the places, on our 2007 Virtual Field Trip organizing itinerary, that had to be left off, owing to changes that had to be made in our schedule and due to the rickety old wheelchair needing repair-which was done in New Jersey.

I had a day with which to play here, so even with the aborted visit to Poe House, I stuck with the plan to spend 2-3 hours at Fort McHenry and have lunch at an Inner Harbor eatery.

The Fort is off by itself, at the mouth of the Northwest Branch of the Patapsco River. 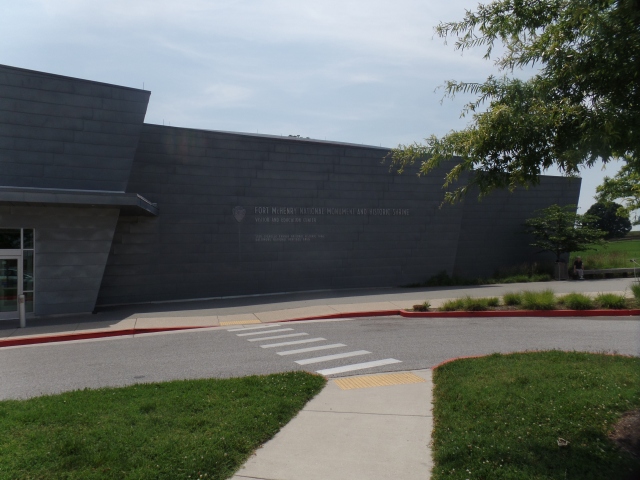 My first forty five minutes were spent listening to a docent explain, in detail, the life and contradictions of Francis Scott Key, a slaveowner who taught his charges to read and write;  an opponent of the War of 1812, who was nonetheless moved to commemorate the Battle of Baltimore in the verses which became our National Anthem;  a patriot, who ended up sitting out the battle, on a British sloop, after successfully negotiating the release of an American physician from British military custody. 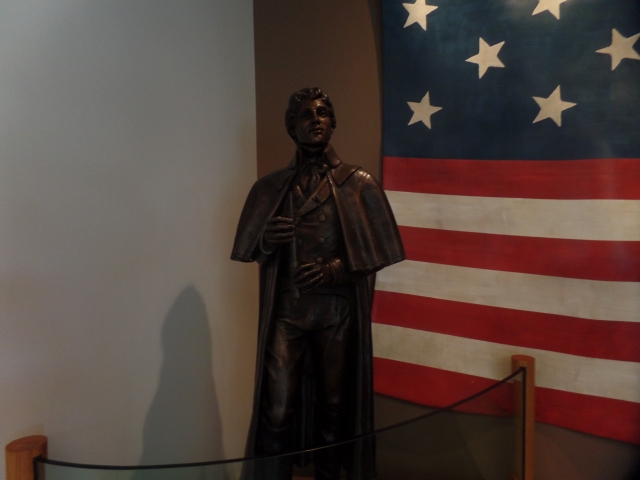 In the background, during the lecture, were playing diverse versions of “The Star-Spangled Banner”, including Jim Hendrix’s 1969 rendition, from the Woodstock Festival.

The docent then took us outside, for further stories of the fort and its various functions, while we headed to the main ramparts. 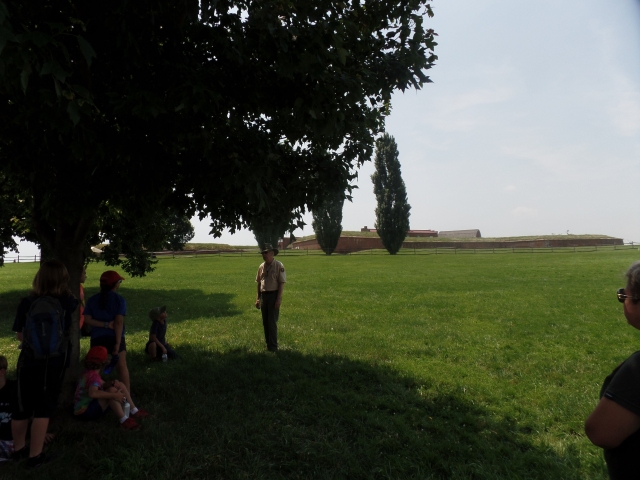 After the British successfully sacked and burned Washington, DC and raided Alexandria,  in 1814, they headed towards Baltimore.   Meeting them were these cannons of Fort McHenry and a combined artillery battery at Forts Babcock, Covington and Look-Out, across outer Harbor.  The combined fusillade, witnessed by Key, aboard the sloop, both convinced the British to abandon hope of capturing the “crown jewel” of wealthy, bustling Baltimore and Key to write his stirring verse. It is often overlooked, though, that the song became our National Anthem in 1931. 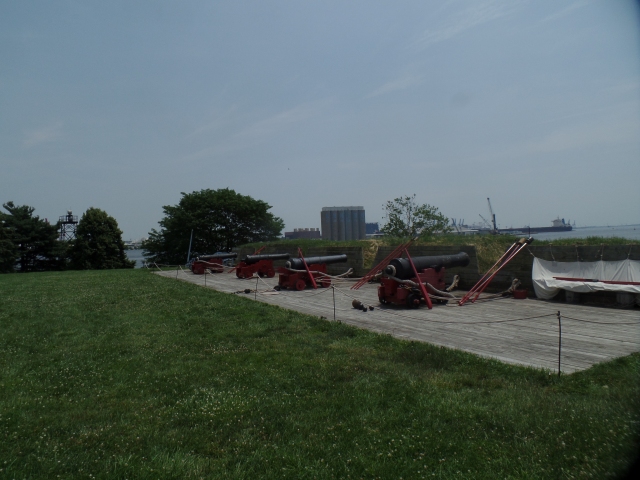 Below, we see the breastworks, in which ammunition was stored, whilst providing cover for the American forces. 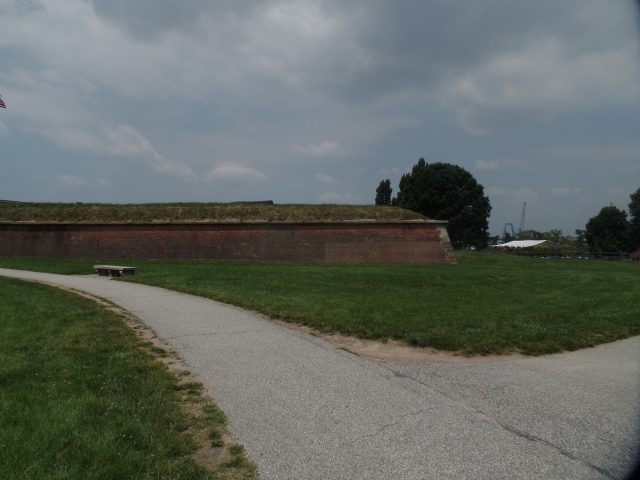 A lone cannon is seen, facing the Patapsco, atop the eastern earthworks. 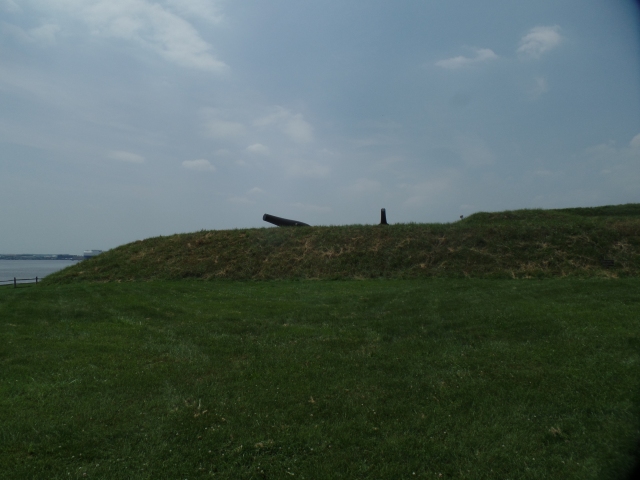 Here is the  entry to an ammunition depot, showing clearly how vital it was for the earthworks to be properly constructed. 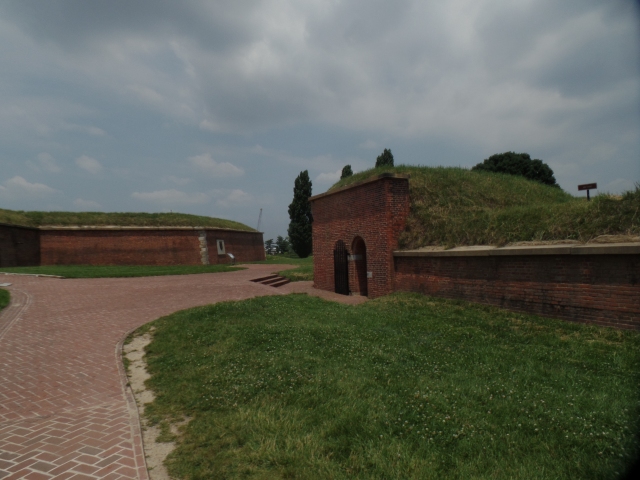 A series of barracks housed American soldiers and Marines, during the War of 1812.  These same buildings housed Confederate prisoners of war, between 1862-65. 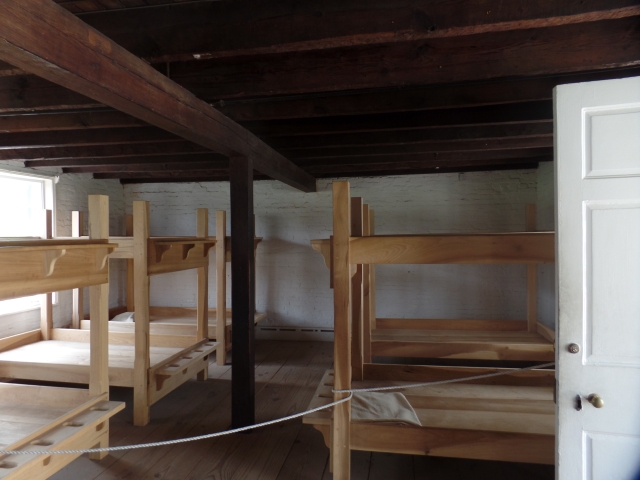 This dining room and office was used by Major General Samuel Smith, the post commander. 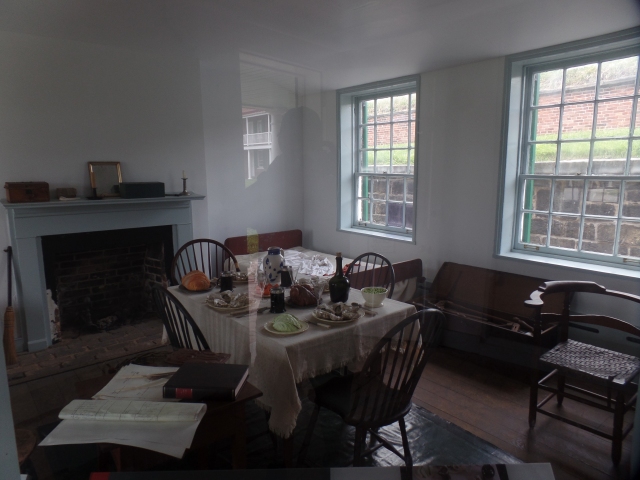 Here is a view of ammunition, stored  in an above-ground safe room. 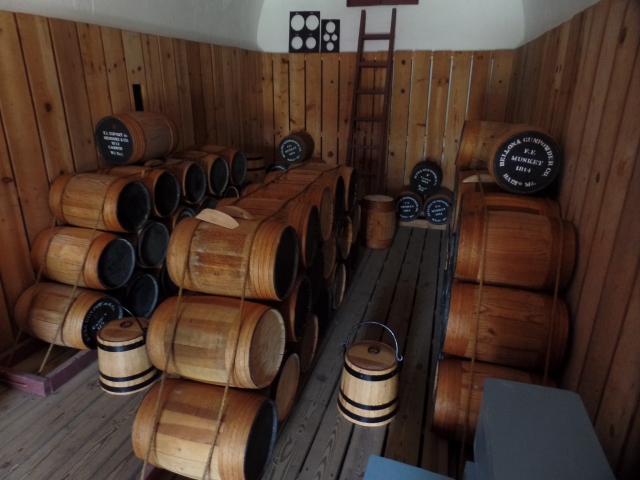 This artillery park was well-guarded by four breastworks. 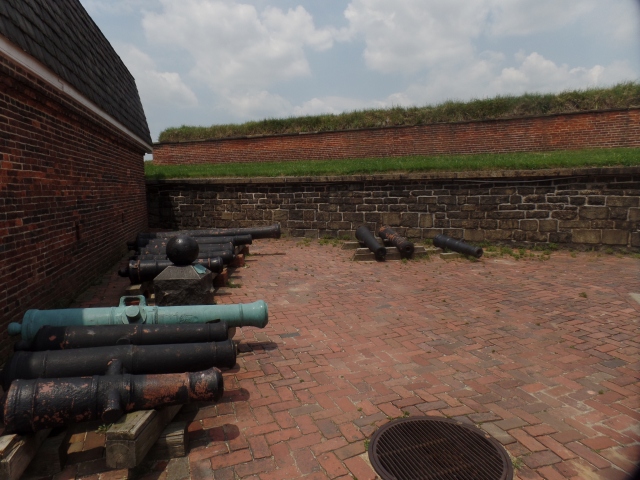 The Army Band was an essential morale-booster for troops preparing for battle. The Band’s quarters were on the west end of the barracks. 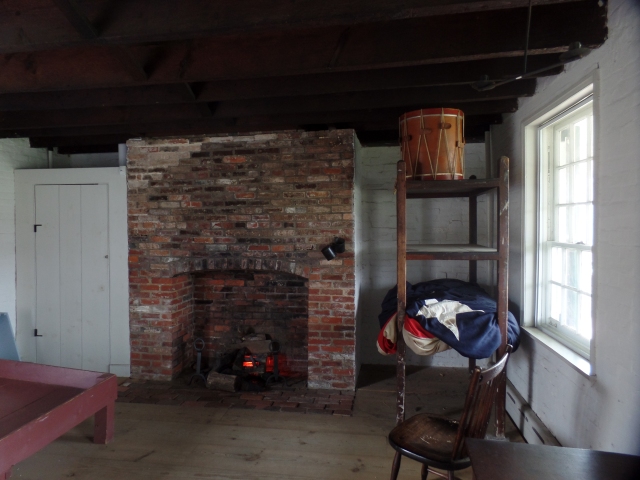 These shelters were built to safeguard the troops, following the shelling of 1814, but were never needed again, after the British were repulsed. 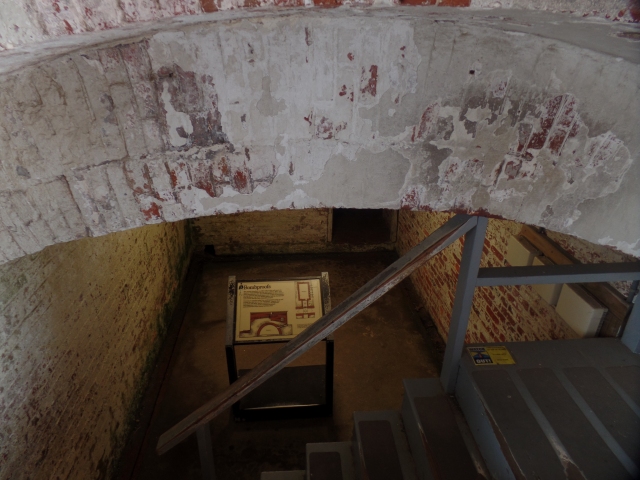 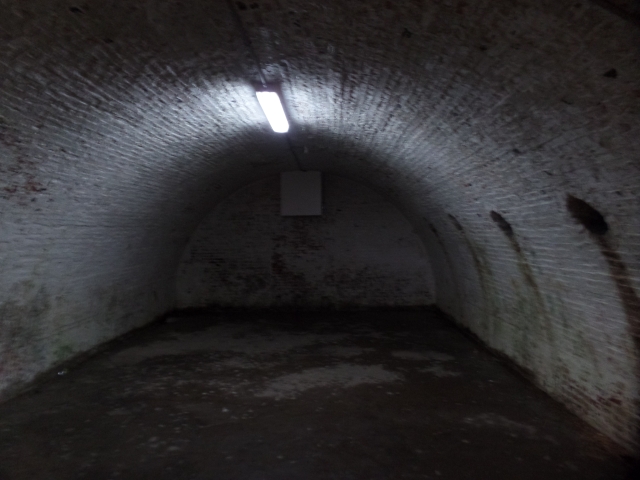 In this stretch of the Patapsco, Sailing Master Beverly Diggs, USN, had several merchant ships scuttled and sunk, to deter any British ships from closely approaching the Inner Harbor.  The action had its desired effect. 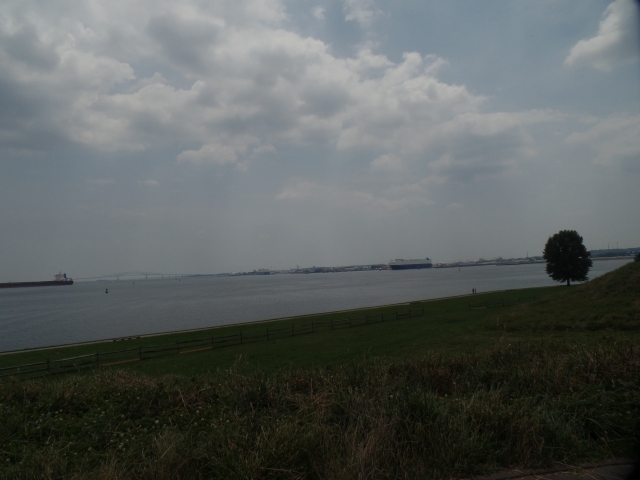 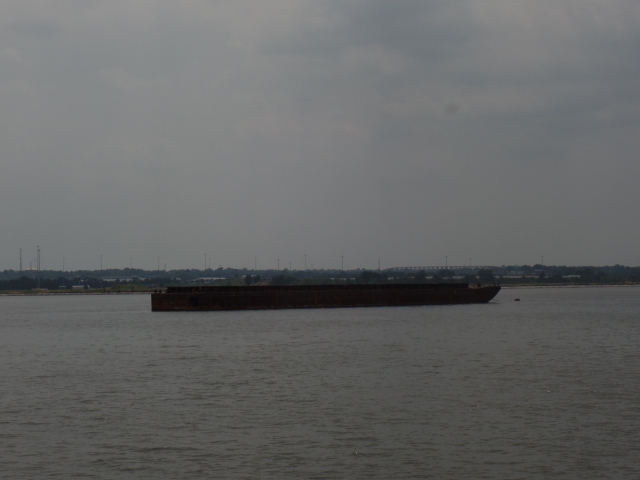 The southwestern corner of the park features this large ammunition magazine, not open to the public. 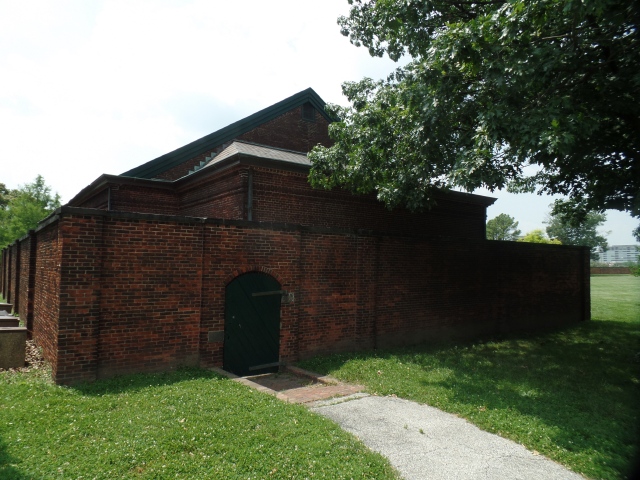 In 1922, Charles Niehaus, sculptor, completed a statue of Orpheus, the Greek musician of legend, in honour of Francis Scott Key.  It stands, between the Magazine and the Visitors Center. 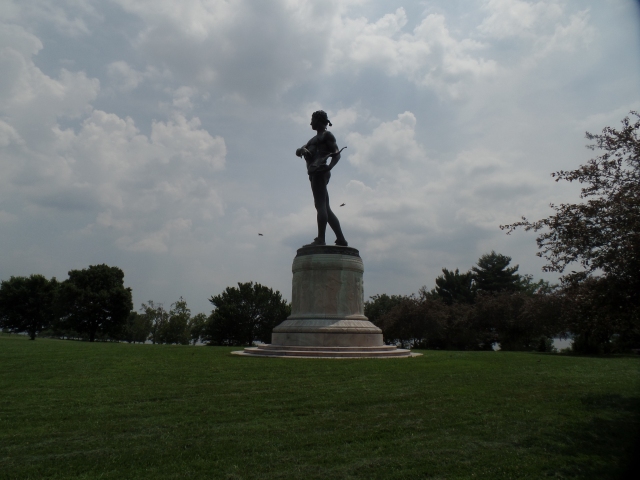 Thus is the story of one of America’s unfortunate, but perhaps necessary, conflicts very well told, at one of its two most resonant battle sites.

I ended my Baltimore experience, this time, at Iron Rooster, near outer Harbor, in the Canton neighbourhood. 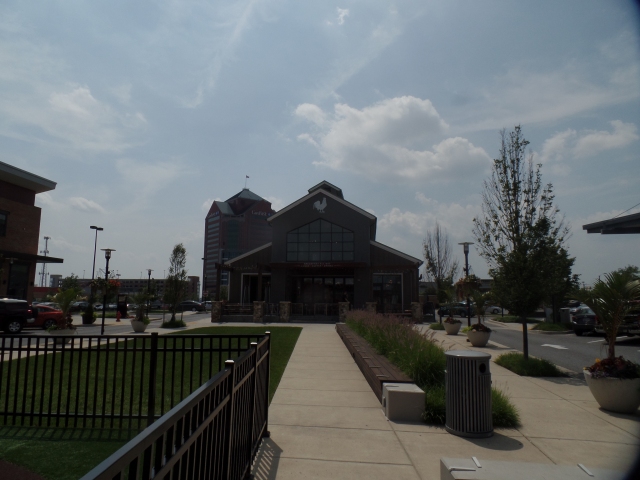 Of course, Inner Harbor and Federal Hill are for another time.  Baltimore ever beckons, and the hostel is always a welcoming haven.

NEXT:  Southwest Maryland and Jamestown