After a short pass by Clemson University, which I found closed for the evening, I headed off to look for a campsite along  Richard B. Russell Lake.  Named for a conservative senator from Georgia, who was noteworthy as both a pragmatist and a parliamentarian, despite having misgivings about integrating whites and blacks at the Federal level, the lake, formed by damming the Savannah River, draws people of all ethnicities.

I chose the first campground on the South Carolina side of the river:  Calhoun Falls State Park.  The town was named for another senator, John C. Calhoun, who strode the floor of his chamber, orating in defense of slavery, whilst privately educating his own slaves back home.  Even the most seemingly venal of people can be complicated.

The Southland has always graced my camping efforts with a torrential rain, and last night was no exception.  Despite the cleansing downpour, with copious thunder and lightning, my tent and rain flap stayed put.  It also helped that the tent site is on porous ground.

Here are some views of  the lake, looking towards the Georgia shore. Note that the soil along the shore is red. 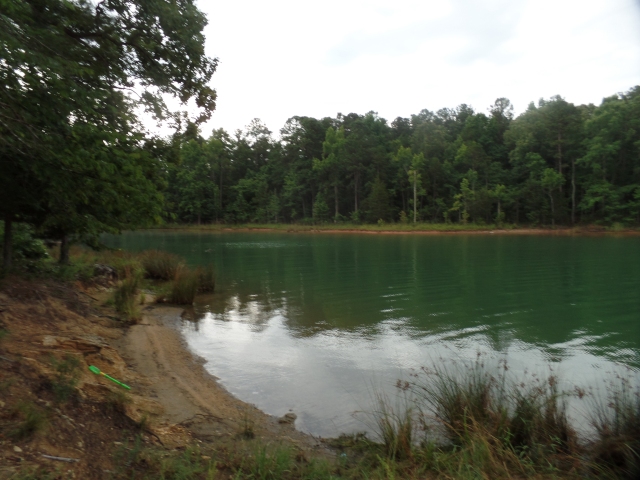 I made a stop at the camp store, for a bit of breakfast, before heading out.  Two sweet teen girls were minding the store and made sure I had fresh coffee and a scone, on this soggy morning.

Outside, the dock and its attendant were getting ready for a more promising day of sunshine.

I took county roads to the town of Calhoun Falls, then to McCormick, before going on to Edgefield, the hometown of another of South Carolina’s more provocative figures:  J. Strom Thurmond.  Before Donald Trump, before George Wallace, Strom Thurmond stood for keeping things as they were, in bygone days- before coming to his senses in later years, and actually being mortified by those who cited him as an example of a man who could “keep the races apart”.

I found numerous mementos of the Civil War, as was to be expected, and solid antebellum architecture.  Then, there was the turkey.  Edgefield’s more eclectic claim to fame is as the headquarters of the American Wild Turkey Association.  One of the men with whom I spoke had been to Prescott, and had hunted wild turkeys in our National Forest. 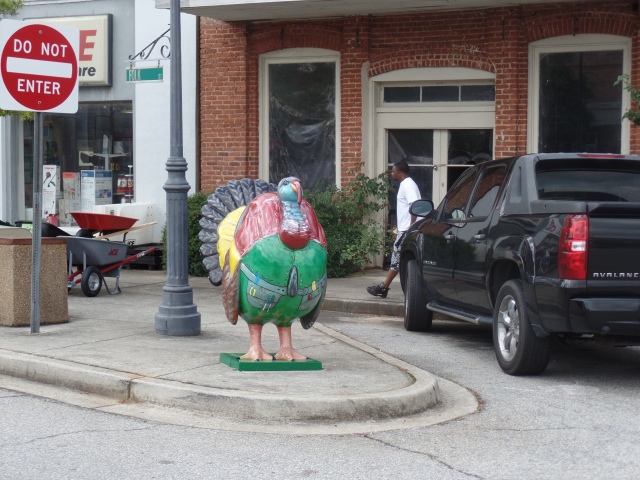 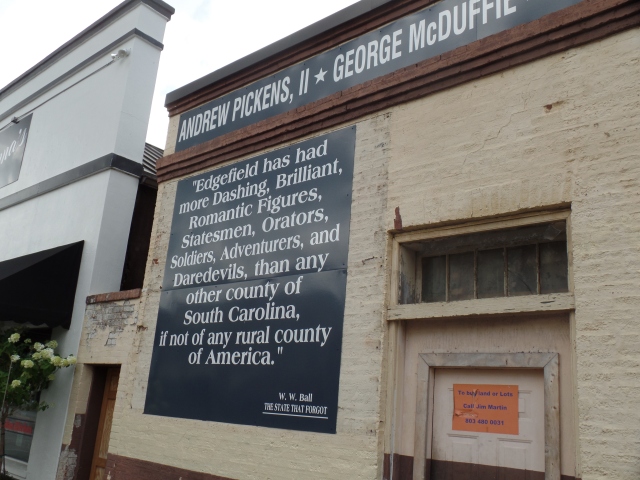 Below, is the town’s memorial to its Confederate  war dead.  Being on the opposite side of the slavery issue, I nonetheless recognize that people of earlier times had to go through their growing pains.  Then, too, so do many of this day and age.

I stopped in Park Row Cafe, for a muffaletta, which held its own with the more famous New Orleans versions of the sandwich.  I was greeted warmly by the young lady who I had met on the street, earlier.  The cafe’s manager, though, was a bit more guarded, wondering aloud about “the western Yankee”. She was quite glad to see me go.  Too bad, as the place has wonderful fare.

Down the road, and a bit north of the river, is Aiken.  It is home to another Xanga friend, who was not at home when I visited downtown.  I can see the attraction, though.  Aiken had a larger Farmers’ Market than Edgefield, and was considerably more vibrant.  I spent most of my time here in New Moon Cafe, a fortuitous discovery, as I was missing Artful Dodger.  I sat, nursing a Haitian pour-over, absorbing the positive energy.  I found this magnetic little cafe a great excuse for returning to Aiken in the future, even if Xanga friend is not around.  Here is a small hotel that might be of interest to those not inclined to camp. 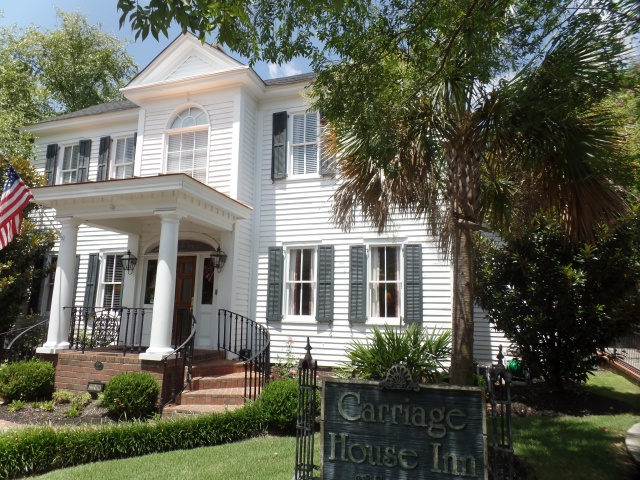 New Moon is all about power!

I took this photo from a discrete distance as, underneath the signage, another patron was relaxing with coffee and the paper.

Leaving salubrious Aiken, I wanted to make fairly good time getting to north Florida, before turning in. So Augusta, Lake Oconee, Macon and Andersonville all wait for another time.  I made a mental note, as to the exquisite beauty of Oconee and its Reynolds properties.  There is much also that Georgia has to tell, regarding the struggles of men with one another.  Americus showed the way towards amity, whilst Andersonville chronicles the flip side of Maryland’s Point Lookout, being the site of a POW camp for Union soldiers, just as the latter was for Confederate POW.

So, I stopped here, in Tifton, just off I-75, enjoying chicken salad at a Zaxbe’s.  I still am determined to make it at least to Ocala, tonight.

cultivating a beautiful and full heart

Home is where our story begins.