I’m enjoying dinner here, at Nichols West, a small but elegant restaurant, on the north side  of this tiny ranching and mining town, itself at the western edge of Yavapai County.  The place is the love-work of an English-South African-New Zealander couple, and has not once left me wanting for a fine meal.

I came here, after setting myself the challenge of re-training my knees to work together, whilst paying respects for a second time, to the nineteen men who perished in the Yarnell Hill fire, on June 30, 2013.

I know members of four of the families of those who gave their lives that day.  Their collective sacrifice is typical of those families who give us their finest members, each and every day, never knowing whether their child, spouse or parent is going to return home, safe and sound.

This sacrifice has been written large, in the 9/11 attacks, in the mass killings of military and first responders of less celebrated, but equally compelling, disasters, and in the wildland fires, and other natural disasters, that continue to ravage locations across the country and across the planet.

So, I walked to the circle of gabions, in a quiet valley below the boulder-racked ridges of Yarnell Hill, the southern tip of the Santa Maria Range.  There were several others, enjoying the bright blue sky and rugged trail, whilst paying their own homage to the brave.  It is always worth the trek. 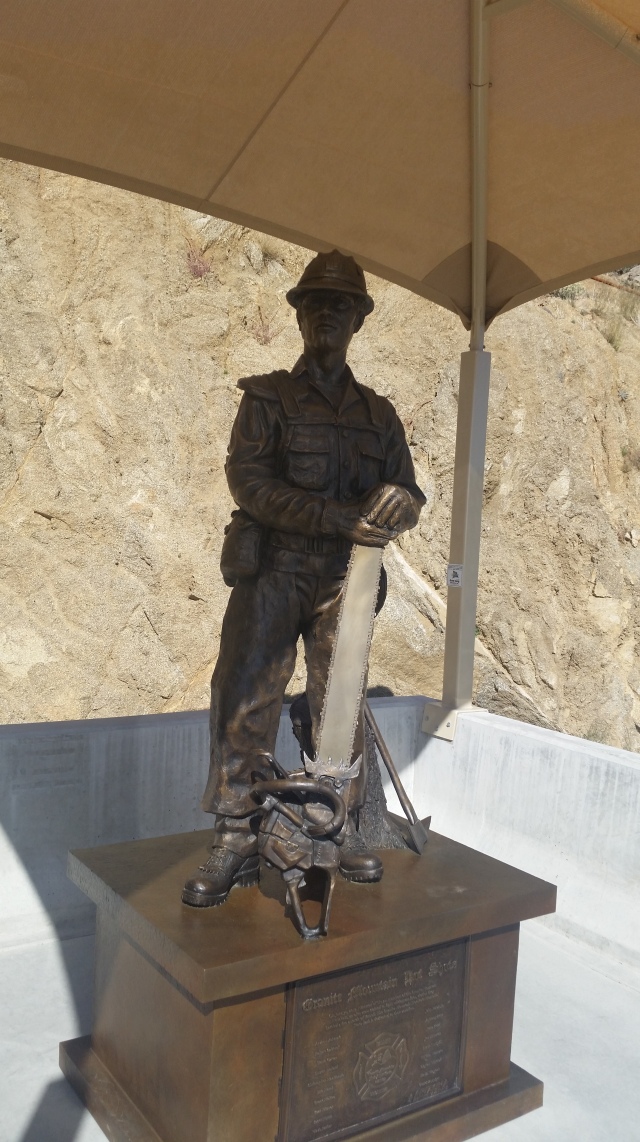 I took my time, and was nearly the last one out of the park, with fifteen minutes to spare. The day  began with me befriending a frightened woman, who is caretaker to the love of her life (Yes, we also serve, who sit and wait), and listening/counseling her to keep on loving and cherishing the man who has been everything to her for decades. It is now ending, with my knees no worse for the wear and a restorative meal, having honoured those fallen men, whose memory is indelible.

December 30, 2016, Chula Vista-  I arrived here at 8:30 PM, PST.  It will be my last time visiting the San Diego area, for the purpose of spending time with my son.  The next time I see him, it will be in Arizona, then in LA, as he gets ready to go overseas, albeit to a “safe” duty station.

I had an interesting drive out here, from Prescott, in the rain.  Our Arizona Outback got a goodly amount of precip, as did SoCal.  Both are parched, so these little sips of dew will slake the earth’s thirst for a week or so. I am hoping the reservoirs, in both states will benefit, at least an inch or two.  I noticed mostly responsible driving, all the way here, even at the often dreadful Morongo roundabout.  Patience, on my part, and that of the three drivers behind me, got all of us into the parking lot of Ruby’s Diner, without so much as a honked horn.  The only exception to the orderly flow came later, in Hemet, when an SUV, going at least 50 mph, blew past three of us, and through the red light, at which we were waiting.  I was reminded of why the driver might have behaved in this way, when going through a DUI checkpoint, set up by the Chula Vista police.

Now, to look back at this curve ball of a year.  2016 saw the end of many lives, both public and private.  I appreciated the accomplishments of John Glenn, Muhammad Ali, Nancy Reagan, David Bowie, Merle Haggard, Prince Nelson, Glenn Frey, George Michael, the mother-daughter duo of Debbie Reynolds and Carrie Fisher, and Harper Lee.  I also am much appreciative of the sacrifices of all First Responders and Military who gave their lives in service, thes past twelve months.  Personally, I will miss two aunts, a cousin, and four friends who passed on, in 2016, also.

The changes that happened, as common folk raised their voices, worldwide, and demanded to be heard, will be long in their unfolding and in their repercussions.  The key to living through those, though, is to remember the power of attraction- and focus on what GOOD one wants to see.  The bad will, otherwise, not fade.

November 30, 2015, Chino Valley- A couple of things happened yesterday, which made me realize, again, that life and fortune are fleeting things- if for no other reason than that we might come to value them.

The New England Patriots lost their first game of this season, which was not surprising, given that most of their marquee players are injured.  I hear and read so many sports commentators rail about injuries, and how they “cheat” good teams of victories- as if there is some sort of injury puppet master out there, just waiting to mess up everyone’s good time.

The fact remains, professional sports, especially  American football, and ice hockey, are intensely physical sports, given to the sorts of injuries that derail golden dreams.  The film, “Concussion”, which enters theaters on Christmas, will outline some aspects of the nature, and impact, of injury on the practice and business of professional sports.  The recent revelations about the injuries suffered by the late, legendary Frank Gifford underscore the media’s spotlight on the matter.

The second reminder came as I was driving.  A mobile home, pulling a flatbed trailer, with a motorcycle on it, was about 500 feet in front of me, on a lonely stretch of road, between the small towns of Aguila and Congress, in west central AZ.  The driver either was nodding off, or misjudged the width of the road, because the trailer’s front right rim hit a signpost, and bounced a bit.  Shards of metal flew back, but fell to the road in front of my safely braking Nissan.  The driver of the mobile home slowly, but steadily, brought the vehicle to a stop on the shoulder of the road.  Two vehicles behind me were able to more safely pull in behind the RV, and render assistance.  Everyone must have been okay, as I didn’t see any fire trucks or police cars headed from Congress, which has the nearest First Responders.  My cell phone had no service, in that area, so the best thing I could have done was to keep on going, which I did.

I thought of how narrow a skin of life we have, and of how close I was, being saved from harm only by staying a safe number of car lengths back.  Time must have more in store, for all concerned.

January 19, 2015, Prescott-   This morning was taken up with a short march from Prescott College, to a circumambulation of the Yavapai County Courthouse, then to a nearby Methodist Church.  At the church, there were bagels (“California-style”, which means untoasted), cream cheese and assorted fruit, with choice of hot beverages.  We then enjoyed a fine performance by the St. Luke’s Ebony Christian Church Choir, from Prescott Valley, and an address by their pastor, Reverend Michael Cannon.  Dr. Martin Luther King, Jr’s brief life of intense public service is the impetus for this day being held up as a National Day of Service, and Mr. Cannon’s admonition was for each of us to examine our own commitments.  He himself sounds like a man who lives each day in such commitment, judging from the accounts of others.

I have committed myself to acts of service to others, for some time.  Many of these are part of an organized effort.  Others are spontaneous and random, as a given day unfolds.  I don’t really see myself as selfish; nor as a hero.  Day by day, each of us can serve others, from the unsung acts of a dedicated parent, or caregiver, to the First Responder working to bring peace to a disastrous scenario.

There is one thing about service, though, that needs to be borne in mind.  It cannot be forced, nor can it be smudged by those who impose the pain of guilt on others.  Last night, several of us were given an indirect message that we were not doing enough to ease the plight of the homeless, and of a few shut-ins who live in a nearby community.  My reaction is, there is always more to be done, in a suffering world.  It cannot, however, be imposed upon us from the masters of guilt.   I trust that everyone who has good in their hearts will work, in some way, to relieve the suffering of those around them.  So it shall ever be.

December 28, 2014, Phoenix- When I was in seventh grade, my home room/math teacher, a burly, gruff Chicagoan named Mr. Anzalone, regularly disparaged those of us who were zoning out during class as “Unconscious”.  He’s gone now, but the sobriquet still seems to fit a good many people.  The theme of today’s final sessions of the Grand Canyon Baha’i Conference is that many, if not most people, over the past seventy years, or longer, have been going about their lives with a sort of tunnel vision.

I don’t exempt myself from this state of being, though the percentage of time when I am totally in tune with my surroundings has increased markedly, since I have started using essential-oils based supplements.  The doltish behaviours still rear their awkward visages, from time to time, but less so than before.

Part of the whole mass somnambulance seems to stem from the notion that we, as individuals, don’t matter much, that the mechanism which supposedly controls it all, and its minions, will just roll over us, anyway.  People on the Left scream when police or military die in the line of duty, and are covered by the press.  People on the Right scream when the President appears on television,on the golf course, or anywhere near where they live.  The common thread is  “WHAT. ABOUT. ME?” Then, it’s back to the Cocoon of Square One.

Everyone’s life matters. Giving a slain police officer, firefighter or member of the Armed Forces his/her due tribute does not take away from your uncle who had a fatal heart attack, three months ago, or the homeless guy on the corner, who froze to death because the local shelter decided that minimum temperature had not been reached that night, or your friend’s cousin’s next-door-neighbour’s grandmother, who passed quietly in her sleep, at age 98.  Pain is pain; mourning deserves respect.  Where this connects with a sleepwalking state is the point at which we can no longer see the social value of honouring our troops or our First Responders, because they are not in our immediate circle.

Everyone’s life deserves dignity.  I am not a financially wealthy man.  I cannot give to any more than a few of the three dozen organizations which solicit my money on a daily basis, online,  by mail, or, until I activated the “No Soliciting” tab on my landline, by phone.  I do not give cash to people on the street, because that may well just be a green light for self-destructive habits.  I will buy food, water or a hot beverage for a needy person.  I may give a ride to someone in need.  I do not mock, hassle or bully people, because no one deserves it, and besides, I am only one lost job away from the streets, myself.

The bottom line is, in this day and age of warp-speed change, we each need, more than ever, to awaken from a semi-conscious state, and prepare ourselves, in every way possible, to be of service and of a full awareness.