This city was once best known as place of uprising- against a second-level military regime, in the Spring of 1980.  Although the uprising was initially quashed, its target, President Chun Doo-hwan, never gained the level of power and stability he wanted, and eventually stepped down, on the last day of 1988.

Today, Guang-joo is a more peaceful place and was the scene of the consecration of the marriage of Aram Boivin and Yunhee Shin, my son and daughter-in-law.  Now they have established themselves as  a full-fledged unit.  At the nicely-appointed Sangmoo Ritz Wedding Hall, a reverent blend of Baha’i scripture and tasteful musical selections made for a lovely hour-long ceremony, cementing what was set in motion with their civil wedding, last November in Guam, which, being an American Territory, provided the U.S. marriage license that will just make things easier, when it comes time for them to return to the U.S.

I gave a short speech, as father of the groom, but otherwise submitted to the instructions of the wedding planner, photographer and master of ceremonies,  I did get in a few photographs, prior to the ceremony.

The above has Yunhee’s name written in Hangul (Korean script), with her family name first, then her given name.  The names of us parents are written above.

The flower arrangements are from well-wishers. Below are random photos of Yunhee and Aram, in the lobby of the wedding hall. 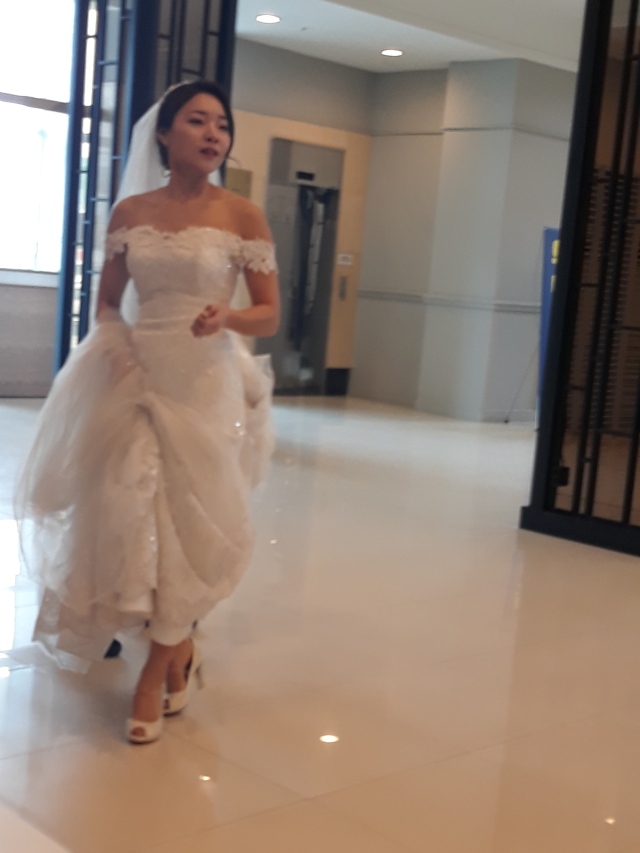 Another milestone has passed, yet with it, the duties of a father-in-law, and God willing, those of a grandparent, will fall to me. My family has now been extended across the Pacific and I have a feeling the blessings far outweigh the burdens.  We will enjoy the rest of this fine week together- tomorrow with Yunhee’s parents and the remainder of the week, divided between Busan and Jeju, the place of Aram’s birth and a well-established resort community.

There was a magnificent scrum of motor vehicles, and drivers, when I arrived at the parking lot of Taco Don’s, and took my place in the rapidly forming motorcade.  The hearse and family cars were followed by the motorcycles, then the classic cars (Jayme was a car buff, being from eastern LA County) and us friends and admirers, taking up the caboose end.

We set out ahead of time, and had cleared Prescott, by the time we were originally supposed to leave.  Some stragglers caught up with us, on Highway 89A, and passed ahead, to get to their designated spots.  By the time we reached Jerome, and wended our way through the “ghost town’s” streets, everything was in perfect order.  Jerome, like much of the Central Highlands, is in full bloom.  Here are some lupines, that graced our view. 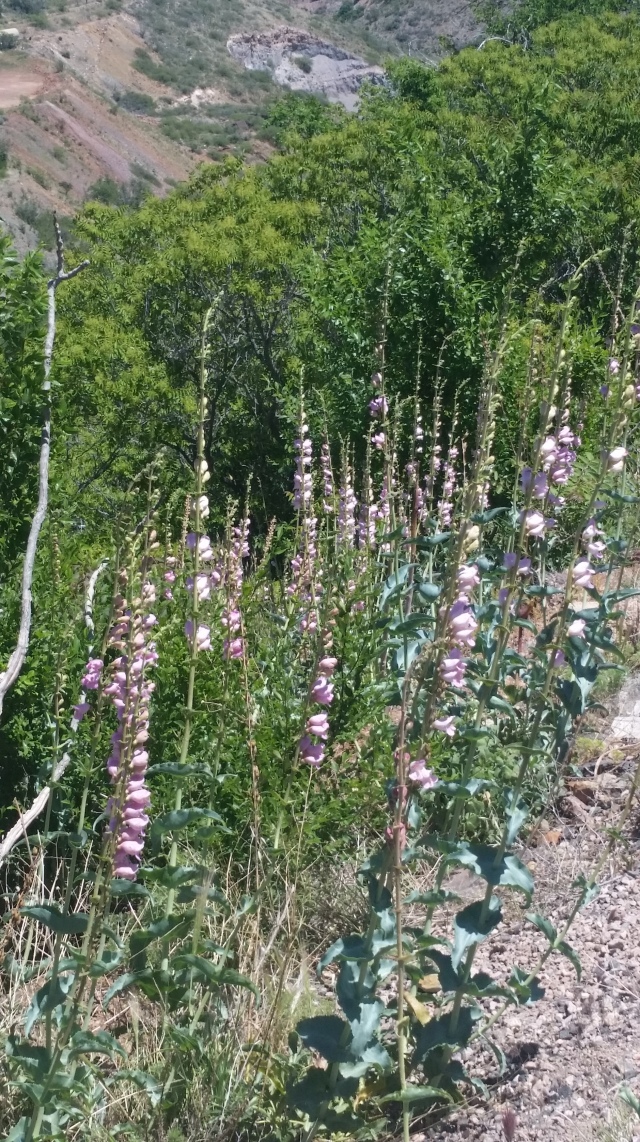 We reached Immaculate Conception Catholic Church, on the northwest side of Cottonwood, with 30 minutes to spare.  I was pleasantly surprised to see that the church’s cross-street neighbour had set up two golden Dol Harubangul (Korean “stone grandfathers”, the symbol of Jeju, where we lived from 1986-92).  This was very much something that Jayme would have found wildly amusing.  As the statues are usually black volcanic rock, this was definitely a nod to the area’s mining culture.

Immaculate Conception is a spacious, majestic parish church- almost cathedralesque, in size and airiness.  The celebrant priest, also a friend of Jayme’s, noted that the man “felt at home here”, making frequent trips over the mountain, on Sunday mornings, perhaps because of the exhilaration one feels, when going through the pines, and along Jerome’s streets.  The church felt quite homelike for us, this morning, with a robust celebration of Jayme’s relationship with his Lord and an outpouring of love, from his family and closest friends.

The exquisite service left me chastened, as funerals so often do.  I thought, once more, of my own ongoing mission, knowing that being there for others, something that Jayme Salazar did so well, and at which I am improving, is imperative.  We will all gather again, in his memory, on May 20, for a Fiesta Grande, at Prescott’s Watson Lake Park.  I promised his dearest friend that I would be there early and leave late.

One other nice touch- when I stopped for lunch, at Colt Grill, in Old Cottonwood, the soundtrack featured Mike and The Mechanics’ “The Living Years” and REM’s “Everybody Hurts”.  The Universe always speaks clearly.

“If you don’t give up and don’t give in, you may just be okay.” – Mike Rutherford

It’s no deep secret that I have issues with those who build walls of snobbery around themselves. I’ve found them everywhere, from my home town of Saugus,  to Jeju, Korea, and to my present home base of Prescott.

Usually, snobs rely on “isms”, to validate their choices.  There are those who fall back on their self-perceived intelligence, while forgetting that the late George Plimpton, and others, routinely ridiculed their insolence.  There are others, “hipsters”, who brag about their sense of aesthetics, overlooking the beauty of simplicity.  Money, status in the community, and a misperceived “racial purity” are other sources of walls. Even in small communities, and communities of colour, subgroups operate to either maintain a false sense of superiority or to ingratiate themselves with those in power.  Seventeen years ago, a woman spread filth about my family and me, in a small desert community.  She had arrived  ten years earlier, from Ohio.  Here in Prescott, another individual, an attendant at a local fitness center, turns her head, sharply and disdainfully, whenever anyone over the age of forty approaches.

I have my own sense of selectivity.  I stay clear of fast food restaurants, many chain stores, and most Big Box establishments.  There is no shortage of people who would cry “Snoot”, at this information, and perhaps they’re right.  I do not, however, treat others with disdain, based on age, physical appearance,  mannerisms,perceived intelligence level, economic status or skin pigmentation.  Even the snobs get a fair hearing.

I have made the observation that fear is behind most snobbery.  If the wall-builders would stop and take several deep breaths, perhaps they would realize that nothing of consequence would befall them, were they to open the blinds, and take off the blinders.

Park Jee-yung dropped out of college, and went to work on a Korean domestic ferry, when her father passed on, two years ago.  It’s what Korean children do for their families, in the Confucian tradition of filial piety. Two weeks ago,  Miss Park found herself, along with nearly 400 other young people and 75 elders, on an ill-fated journey to Jeju, Korea’s holiday mecca, some 60 miles off the southwest tip of the Korean Peninsula.  This journey entailed sailing from a port in the Seoul area, and thus a potentially treacherous voyage through countless areas of rock and reef.  The story of how the journey ended is gradually unfolding:  Essentially, an inexperienced and unconfident helmsman, scarcely more than a child herself, lost her way and the ship foundered into a mess of rocks.  It’s not certain where the ship’s captain was during this time, but it is notable that he left the ship while most of his passengers remained aboard, and the ship was going inexorably down.

Park Jee-yung stayed with the teenagers, going as many places on board as time allowed, finding life vests for her younger charges and trying to get as many on board life rafts as she could.  Survivors reported that Miss Park repeatedly refused to leave the ship, saying it was the crew’s duty, and thus hers, to be the last to leave. So it went- for her, and possibly other crewmates, though not for the senior ship officials.  This has become de rigeur, in recent years, for the crews of troubled vessels, but I digress.

I lived in Korea, on Jeju, for 5 1/2 years.  The vast majority of the people I met were like Park Jee-yung- bright, organized, and self-effacing.  I can only imagine the horror that has engulfed this blessed nation, whose traditions dictate that a people move forward together, that the needs of the whole trump the whims of the parts, that children mind their elders, without question.

So it went, that horrific day.  The aging ship’s captain issued an order to the students on board to stay in their cabins.  A few rowdy boys chose to challenge that order and went on deck, saw what was happening and, rallying some of their schoolmates, managed to get on board the life vessels and to safety.  One of them was the first to issue a distress call to the mainland.  These were among the people helped by Park Jee-yun.

There is much to admire about Korean society.  Few nations could have risen out of the ashes of war, largely on their own, as South Korea has.  Shoulder to shoulder, Koreans have seen what was needed, and brought it about.  Now it is time to take stock of the price of fragmentation- nearly 160 dead, as I write this, and hundreds more still missing.  I sit here, in the comfort of an American home, and feel only grief and sorrow.  So many beautiful souls, who could have only elevated life in their city of Ansan, and beyond, now sit at the Throne of the God of us all, and wait to see just how they might comfort those who miss them so grievously.

Let Korea continue to move forward as an entity, with the caveat that sometimes, many times, the voices of the rambunctious need to be heard. The gadflies among us frequently see things the masses overlook, and their warnings, however irritating at the get-go, turn out to be what save the day.  Cassandra was not altogether insane.

Rest in peace, beautiful friends, and  may the nation you left too soon regroup, restore its sense of balance and move forward, in unison.