The title refers to August 10, 1861, and I will elaborate, momentarily.  My Juneteenth began in Amarillo, with three surly drivers edging towards road rage, within a span of an hour.  The first one zipped around the corner and found me in his way, so the horn blew and the fist was pumpin’.  I got off the road and waited a bit.  Then there was the woman who was off-kilter because I went straight when there was no “left turn only” indicator.  Still no harm, no foul.  Finally, after my Planet Fitness workout, across town, I was screamed at, for driving across a parking lot and not stopping at each point where the road intersects with said lot.  This is, apparently, an Amarillo thing. (In Arizona, every parking lot intersection has a STOP sign. We must be spoiled.)

With all that, I left the city behind, and waltzed on over to Shamrock (See Ernest Tubb’s “Waltz Across Texas”).  There is a place there, called Big Vern’s Steak House.  Aram and I had lunch there, in 2011.  Vern no longer opens for lunch, so after looking around and asking the kind cross street neighbour as to whether Vern was okay (He is; he just opens for dinner only, is all.), I checked out a place called Rusty’s.  The perky owner told me she wouldn’t be open for another week or so, but if I went north a piece, I’d find a nice little place called Mesquite Canyon Steak House.  I did, and it filled the lunch bill nicely.

Next to Rusty’s is  Spinning Jenny’s House of Music.  If I’d been in a better mood, I’d have popped on in there.  Rusty and Jenny are both pretty and vivacious ladies, with good product, so it’s likely I’ll stop in Shamrock, next time I’m in the area.

I recall June 19 as Juneteenth, the day that Texas slaves received word of the Emancipation Proclamation:  June 19, 1865, when the Union forces landed in Galveston and spread the news.  This was 2 1/2 years after President Lincoln issued the Proclamation.  Today, many people are still not free of their own limiting mental chains.

“Waltz Across Texas” became “Zumba Across Oklahoma”, shortly thereafter.  I have a breakfast meet-up with one of my cousins, who lives near Joplin, early tomorrow morning.  So, there were no Sooners on my schedule, this leg of the trip.  I took the I-40 to 44 and onward straight-away, finding that the long-standing detour through the east side of Tulsa has been eliminated.  It’s all freeway, from Erick to Miami, so I found an hour had been shaved off the drive.  There was a minor rush hour jam, near downtown OKC, but that was all.

Once in Joplin, I found Motel 6 was reasonable, and that this franchise owner has a high-tech system, reminiscent of the European hotels I used, in 2014.  Keyless entry and paperless registration are here in the Heartland.

NEXT:  The Battle of Wilson’s Creek

My son turned 29 today, and ended one banner year, with the promise of yet another. I rose early, in Santa Rosa, NM, and made it my goal to get to Amarillo, and the Blue Front Cafe, by lunch time.  The Time Zone differential always figures in, here, so when I call Wes, and tell him I’ll meet him for lunch, we both end up remembering, sooner or later, that 12 Noon means 1 PM.  So, once again, I miss Santa Rosa’s Blue Hole, for Amarillo’s Blue Front.

Wes had the place figured to be an oyster bar, and maybe that’s the new owner’s specialty, but the young lady who served us basically presented a lot of fare to which I’m accustomed. It is still good food, just not in as folksy an ambiance as under the previous ownership.  To a Texan, and to lesser an extent, an Arizonan, such tradition is everything.

After spinning a few yarns, and hearing some of Wes’s, I kept on, across the Llano Estacado.  Mailing my car payment, at the Post Office in Groom, TX, involved cruising around that handsome little town, just a bit.  Oklahoma, though, was not long in appearing in the foreground.

I had no pressing business, in the Sooner State, so essentially it was just  a series of pleasant memories that passed by, along with the towns:  Erick, Sayre, Elk City, Clinton, Weatherford, El Reno, Yukon and OKC.  There was no time to stop at the Memorial- maybe on the flip flop.  The Turnpike was what it always is, a quicker way to southwest Missouri and points further on.  As many of you know, it is divided into two segments, in northeast Oklahoma:  Before Tulsa and After Tulsa.  The erstwhile Oil Capital has not been high on my list, for several years, and all owing to my having witnessed a nasty tirade by a Greyhound Bus employee towards a fellow passenger, at the company’s terminal, in 1979.  That’s a lame excuse for a bad attitude, but it’s stayed in the back of my mind, ever since.  It was time to shed that perception.  I pulled off the highway, gassed up, admired a lovely woman-in a respectful manner and from a distance, and kept on with my drive to Joplin.   It was a ridiculous remedy, for a ridiculous grudge, but that’s all it took for Tulsa to win my trust.  One of these days, I will spend a day or two there, and better get to know the city of the Golden Hurricane.

I had planned on camping, in or near Joplin.  Cousin Lisa was tied up with 4-H, so I will try and catch her on the flip-flop, and besides, there was lightning flashing nearby, so I passed up the idea of setting up camp.  Tara Motel appeared, east of Joplin, as I was running out of energy, and options.  The place is a minimalist paradise, for the common man, who is just trying to catch about 120 winks.  That I was sure to do.  With no WiFi here, and Rerun Heaven in full swing, I read a bit and headed for dreamland.

NEXT UP:  Across Missouri and Illinois

February 20, 2017, Anthem- The sight that greeted me, as I headed towards the spot where I heard a small child screaming, was not an alien arachnid, but the upended root system of a dead mesquite.

The child, likewise, was fine.  He was just being willful and demanding- and mom had everything under control.  This mini-outburst was off to the side of the Anthem segment of the Maricopa Trail.

I was driving back from a lengthy, and rather testy, medical appointment this morning .  (I am fine, and the less said, the better), when I happened upon the Anthem Trailhead.  This was another confirmation of the dictum that one creates one’s own reality.  I had been curious, as to the condition of the Sonoran Desert, after this weekend’s copious rain.  I was also curious, as to the terrain on the Maricopa Trail, between I-17 and Anthem.  The gooey, but flat, hike I took, early this afternoon, answered both questions.

As you can see above, there are a fair number of boulders strewn along this alluvial landscape, and it is entirely within settled horse country.

There are episodic pools, along the way, one of which gave me a smile.  The main water body here, Skunk Creek, was bone dry.  There were no little white and black critters, either, but the tracks and scent of javelina were much in evidence. 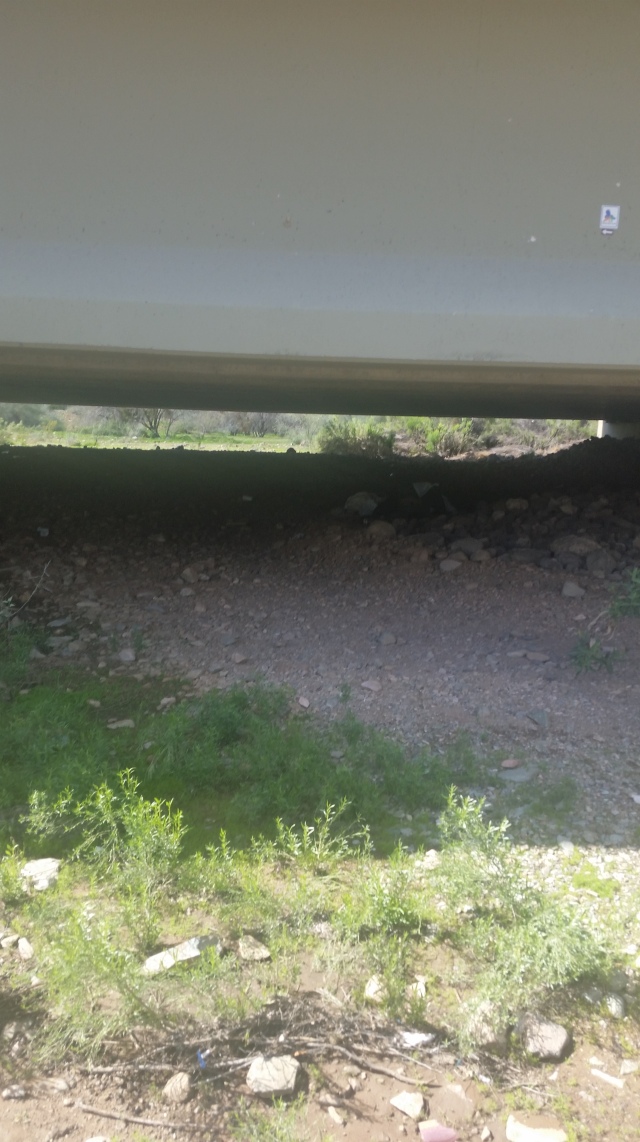 I came to this underpass, at the off-ramp from I-17, and spotted the continuation of Maricopa Trail, which would have taken me to its junction with Black Canyon Trail, another 1/8 mile to the west..  So, in essence, I have hiked, in segments, from Mayer to Anthem, over the past 1 1/2 years.  My main interest in the Maricopa Trail lies in its mountains and canyons, but I will certainly take the sense of continuity, along with them.

Now, back to the title of this post.  I was treated to a sudden, brief visit from a friend who lives in Oklahoma, and his little chihuahua.  It seems my Okie friends love their ankle biters, but this little guy gave me a sniff-over and jumped up on my lap.  It was a fast friendship.  They left, ahead of me, this morning, having enjoyed an evening of warmth and stabilization, following their sodden ride through eastern and central Arizona.  At least now, the Sun will temper their return home.

So, the ground will need a few days to dry out, my lower left molar has a temporary crown-with its permanent replacement in three weeks, and I have a new little friend.

March 25, 2015, Chino Valley- Last night, a family of three lost their trailer home, in an unincorporated town, about eight miles north of here.   The oldest child attends the school, where I am working for three days this week. He, his mother and toddler sister lost everything they owned, except the clothes that were on their backs, at the time of the blaze.  They lost their pets.  That home was in an area which lies outside any fire district, meaning that residents have to pay for fire fighting service.  The family had not paid for the service, so the home was a lost cause.  Of course, mobile homes are not likely to last long, in a fire, anyway.  A crew would have to arrive within three minutes of a blaze starting, in order for it to have any chance of success in extinguishing the blaze.

I watched again this evening, as reports of deadly tornadoes came out of Oklahoma:  Oklahoma City and Moore, again, and Tulsa, its suburbs of Sand Springs and Okmulgee, also in the wind’s cross-hairs.  This is March, so God, alone, knows how this tornado season, April to June, will play out in full.  Everything seems on hyperdrive, weatherwise, this year, though, so perhaps the season will spend itself early, as well.

A pilot on a crowded commercial flight in western Europe was locked out of his own cockpit, and the plane crashed, killing all on board.  The cause is left to the realm of speculation- always a sauce for further mayhem and disaster.

Terror, both natural and man-made, abounds, at any given time.  Heartbreak, both local and international, is rife, most days.  The only solution, as I see it, is unity of response and of relief.  Some of us can offer money.  Others, like me, can offer only time and energy. My point is solely that each of us can contribute to a group effort, at some level.  Only by working together, consistently, can we foster healing.  This has not come easily to me, over time, having been a loner until the age of 30, and more or less a steadfast, but somewhat quiet, spouse, until age 60.  Penny got me out of my shell, and circumstances since she left this life have kept me out of it.

My only question:  Where on the involvement spectrum are you?