I made my second visit of this year to an old favorite- Laguna Beach, on Thursday morning (6/7), at the behest of my OC friend, J.  In truth, it doesn’t take much to get me to stop somewhere on the coast between San Diego and Los Angeles; there is so much to be savored.

We enjoyed a fine brunch at The Cottage, near Laguna Five Points- just north of Laguna Art Museum.  This was one of the haunts of the well-known actor Eiler Larsen, who was a fixture in Laguna Beach for several decades.  “The Greeter”, as Eiler was known, graced the beach town with his presence and his various guises.

This statue of Eiler is several blocks south of The Cottage, which goes to show that he just loved Laguna, wherever he was in town.

We walked along Main Beach, southward as far as the private resorts.

There is a Bird Rock here, as there is at Dana Point.

While Heisler Park, which I featured in my last Laguna Beach post this past March, is LB’s premier botanical spot, Main Beach has its mini-Heislers.

This Life Guard Station was salvaged from an inland site that was being demolished. 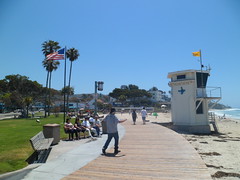 Back in 1979, a local prankster tried to tell me this was Laguna  Beach’s Spanish mission.  I already knew that to be balderdash- LOL.  Still, it’s a fine resort hotel.

Beyond Hotel Laguna Beach, the rocks and private resorts modify a walker’s regimen.

Halfway up the walk to streetside, there is an urgent message for us all.

On this overlook, we met a delightful newlywed couple.  J took a couple of photos for them here and along the street.

A few minutes later, J and I parted company and I headed for another of my OC favorites- San Juan Capistrano.  That fascinating town will be the subject of the next two posts- one on the Mission and the other on Los Rios.