This abandoned settlement, east of Mesa Verde, predates the larger sets of ruins by 300-500 years.  The settlement was built by people known these days only as “Ancient Puebloans”. They are regarded as the ancestors of those who built Mesa Verde and of the modern Zuni,  Keresan and Tewa peoples, of New Mexico.

Here are some scenes of the area, taken during a guided tour, on August 1.  All tours begin and end HERE.

Then, visitors pile into their vehicles and follow the guide, up the road.  Scenes like this may be had, from the upper parking lot, near the first ruins.

Here is an example of an unexcavated house site.

It was pretty hazy on that day, but one could get a sense of the ruggedness of this area.

Here’s a semi-excavated site. ^  Below, is a marker, used by the ancients, for astronomical positioning. 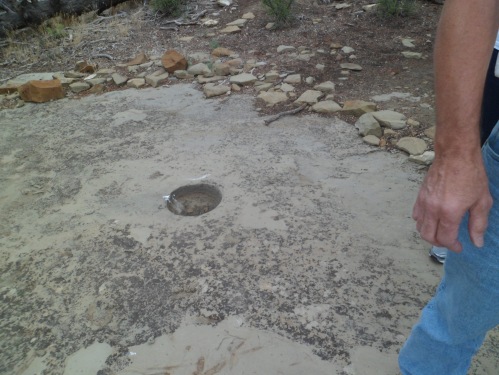 Here is one of the granite formations near the first set of dwellings.

Now, we are at the major set of structures, including the kivas and larger dwellings.

This limestone bench made for a good resting place, for some of the disabled members of our tour group.

This alcove, on the south side of the Great House, was intended to provide support for the structure.

Here are some shots of the Grand Kiva, the major ceremonial site in the complex.

These granite formations are among those which give Chimney Rock its name.

Once I had finished here, one more goal remained on this spiritual journey:  Wetherill Mesa.