In the summer of 1981, I was coping with what turned out to be a short-term derailment in my private life.  What worked for me was a week’s sojourn in southeast Utah, with visits and hikes in Capitol Reef National Monument and Natural Bridges National Monument.  I came upon the latter, serendipitously, going in with a skepticism as to how it would measure up to more well-known places, such as Arches and Canyonlands.

The rangers on duty at the time were among the most enthusiastic workers I’ve seen, cheerfully stating that I would find the Monument equal to Capitol Reef, certainly, and as challenging a series of hikes as any at Arches.

On that trip, I camped overnight and hiked a nine-mile loop that took in all three bridges.  This time, still tired from Goosenecks, I opted for one hike to Sipapu Bridge, and checked out the other two, Kachina and Owachomo, from short-trail overlooks, saving their trails for another visit.

Let’s get back to the difference between a natural bridge and an  arch.  The only difference, between bridges and OTHER types of arches, is that bridges are created by a body of water actively eroding the rock. Other arches are created by wind erosion, as well as flash flooding.

So, here goes-a flash flood of photos.  First, from the Canyon View overlook, which gives an introduction to the type of sandstone from which the arches, which became the bridges, were carved. 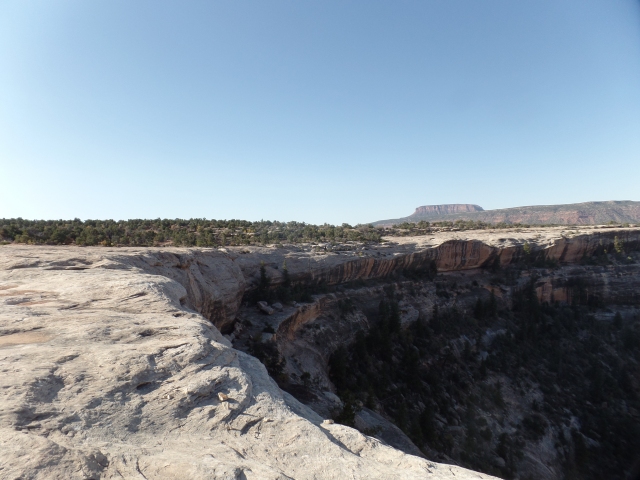 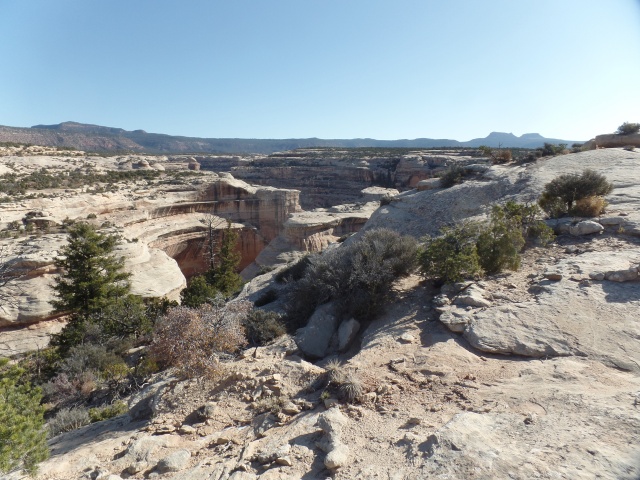 Note that some of the same sky islands that are found at Goosenecks, and elsewhere in this area, are found here. 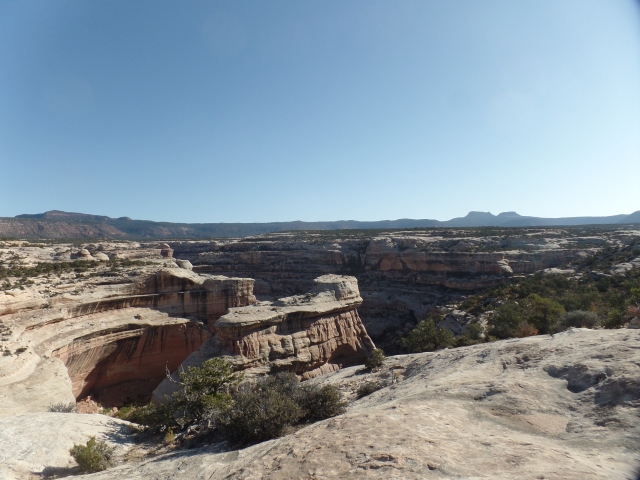 A first view of Sipapu Arch is found at an overlook, 1/4 mile from the trailhead.

Now, it was down the trail, with the help of some rails and log ladders.

Lichen is also ever at work, turning rock back into soil.

After three log ladders and several stretches of railing, I was close to Sipapu Arch.  Sipapu is a Hopi word, meaning “place of emergence”.  I can imagine how it would have felt, to have this structure towering overhead, when climbing out of a subterranean refuge.  For the record, the Hopi regard their actual Sipapu as being near Indian Gardens, in the Grand Canyon. 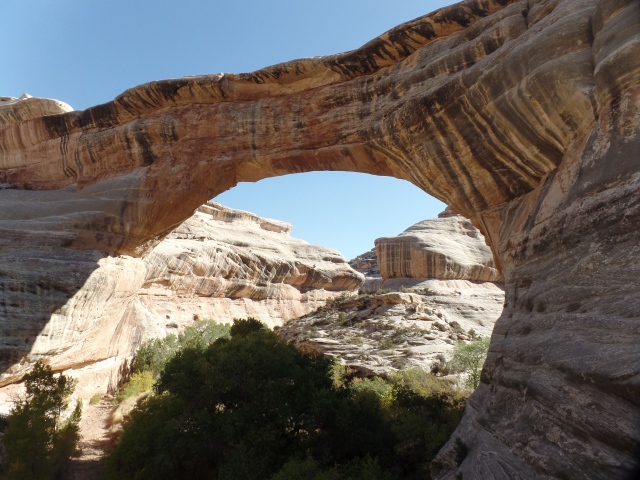 From long ago, and a galaxy far away, comes Jobba the Hutt, keeping an eye on things. 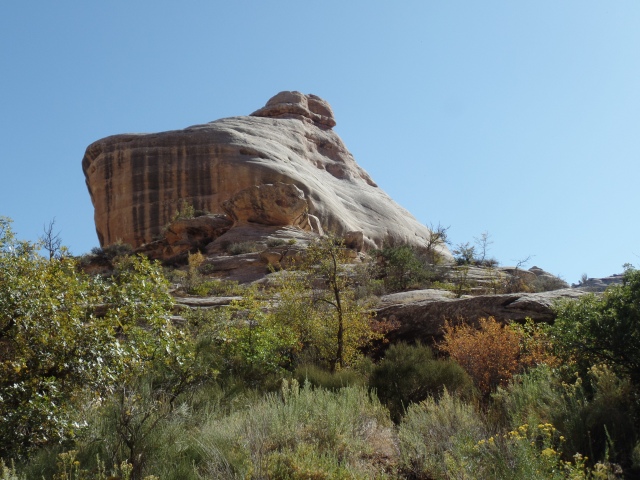 After absorbing the energy of being under the bridge, it was back up the ladder to further exploration. 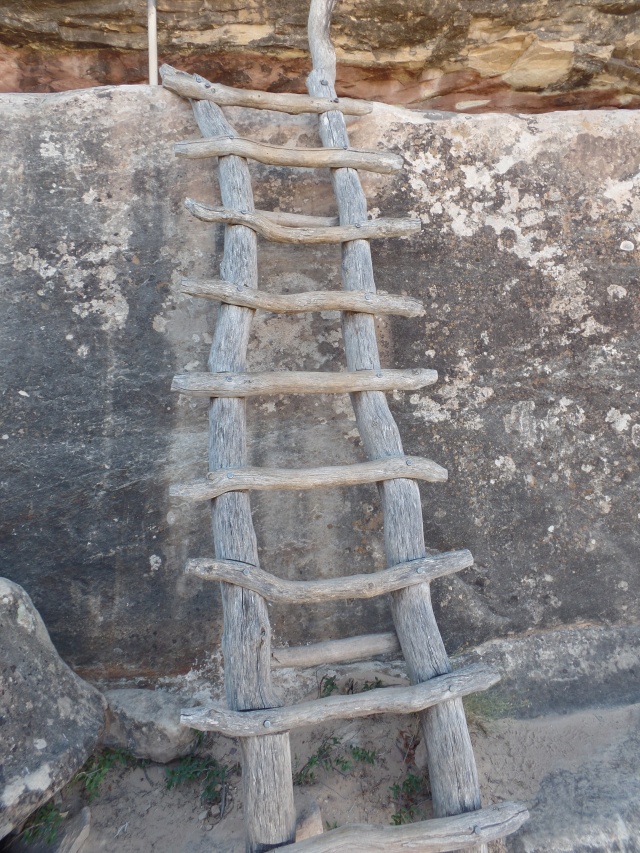 An interlude, between Sipapu and the Kachina Bridge overlook, is a view of Horse Collar ruin.  There appear to be two groups who built kivas here:  A circular kiva was built by people of the Ancient Puebloan culture, related to the Hopi, Zuni and Keresan nations of today.  A square kiva was built by people of  the Kayenta culture, associated with Hovenweep ruins, which are about 40 miles from Natural Bridges.  More on Hovenweep, in the next post. 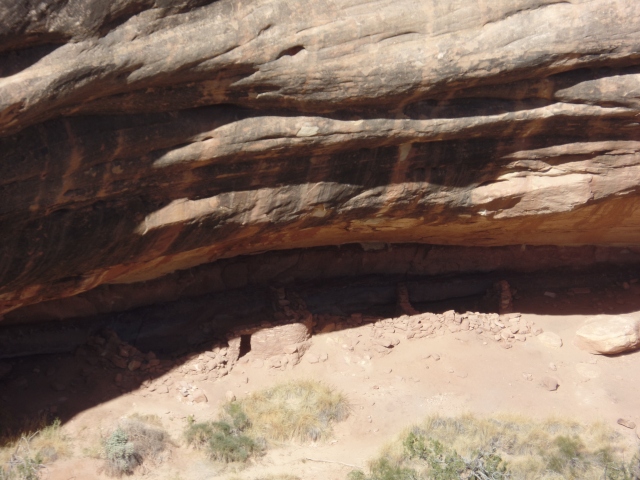 The overlook for Kachina Bridge shows it to be the widest of the three.  First, though, note the sandstone twins.

Owachomo Bridge, visible below, is the narrowest of the three, being nine feet thick at its strongest point. 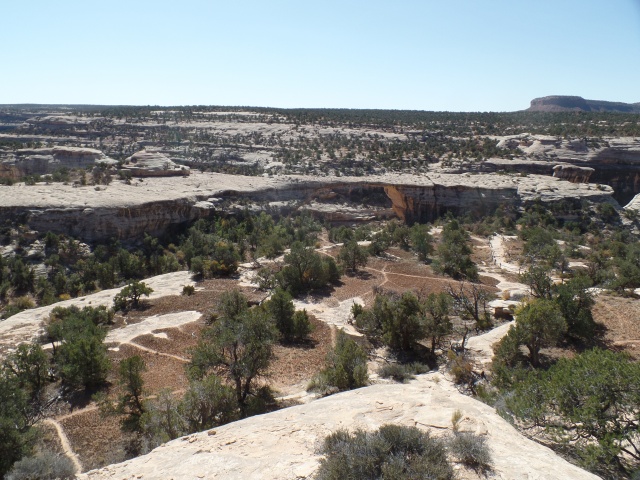 Natural Bridges is adjacent to Bears Ears National Monument, a place whose existence is somewhat controversial.  The butte for which the Monument is named is visible from the turnoff to the Visitors Center for Natural Bridges.  The butte is sacred to Dineh and Ute people.

In truth, I wanted lunch, more than anything else, so heading to this small tourist town was a priority,  over two more hikes.  Those give me an excuse to come back to Natural Bridges, though, which is a pretty good thing.