So, I got back to Home Base around 4 a.m., doing what is customary, under such circumstances: Sleeping for three hours.  It was then time to shower and do devotions, as always, and head off to the American Legion, for the last breakfast I will have with the mates, for a month or so-as my final physical Fast is approaching (March 1-19, this year).  A devotional meeting followed, in Prescott Valley, for which I was actually quite mentally present.

More sleep took up early afternoon, thus righting my physical/mental ship.  Among other things, the illness that lingered, for nearly two weeks, is finally gone.  Maybe the exercise, of pushing myself to do the long round trip to/from Indio, was exactly what was needed to push the remnants out.  Sometimes, counter-intuitive is the way to go.

At last night’s concert, Sheryl took a few minutes to engage the audience, as to who in the crowd was in their thirties, forties and fifties, the last being her own age group.  She asked how many were still having fun, in their fifties-as she certainly is.  A goodly number gave a rousing response.   That’s gratifying; people ought to enjoy life, at any age.  She didn’t ask US-those in our sixties and beyond, but I am, my row mates (also in their sixties) and the seventy-somethings, who were seated across the aisle, seemed to be having a great time of it, as well.

So, on we go. This coming week brings Mardi Gras, Ash Wednesday/Lent and, for us Baha’is, Ayyam-i-Ha (the Intercalary Days of feasting and gift-giving, before our Fast begins, a week from today).

May it be a great run-up to Leap Day!

May 13, 2016, Prescott- Yesterday was a very tightly-packed day.  Work was routine, at the small school where I spent one last, pre-arranged day,punctuated only by a snafu involving our paychecks.  This was nicely counterbalanced by a timely check from another district, where I spent another “final” day, late last month.

Dashing hither and yon, after work, I voted in an American Legion election, facilitated a Baha’i study session and finally settled in for the evening, at 7:30 P.M.  Someone remarked to me, earlier in the evening, that perhaps those with hyper-busy schedules are covering up something.  Maybe, but in my case,  there is more of a sense of responsibility.  Trust me, I do like my unwind-time, and am comfortable in my own skin.

Now, I am back at Prescott High School, for the last ten days of the academic year, with a very strong possibility of returning in the Fall.  It’s Spring Festival time, so a school end-of-year assembly was held this morning, and Carnival is now being held, somewhere on campus.  I am with a few of my kids who just need a place to sit and feel safe.  That’s always been my wont- in too many places in the world, there are marginalized people.  In any high school, most find a niche.  Some end up in niche like mine, a good-sized, comfortable classroom, with a few computers, three round tables and an air of “you matter”.

Festivals, like surfable waves, hiking trails and 5 P.M., are always to be found, somewhere in the world.  Most are modest affairs, appealing only to locals. Yet,  each of them makes a big difference in the lives of several people.  So, great and small, they sustain us.  I have felt sustenance from many festivals, from the annual Ridvan gatherings, Thanksgiving Dinners and the camaraderie of St. Patrick’s, Fourth of July and Hallowe’en to the  every-so-many-years that I might make it to Mardi Gras, Chusok or Diwali.

Mostly, though, it’s what you make of every single day, that constitutes a festival.

The Pearl River divides the eastern nub of Louisiana from Mississippi, before joining the Gulf of Mexico.  It’s a working man’s river, so there were dozens of fisherfolk already at work, when I moseyed on through, on this President’s Day morning.  It is a gray day, payback for three days of Florida sunshine.  This was Cajun Land, though, and the good times would roll, regardless. 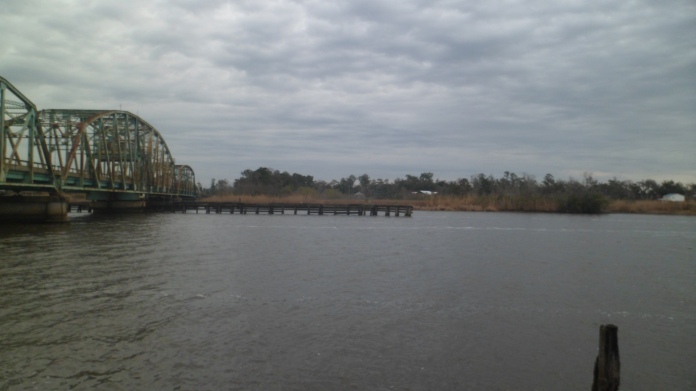 A few miles westward, Lake Pontchartrain unfolded, in all its Southern Cousin to the Great Lakes glory.  It, too, is a working man’s waterway, and many were likewise hard at labour, on its shores.  My brief visit was to Irish Bayou, on the southeast corner of the lake. 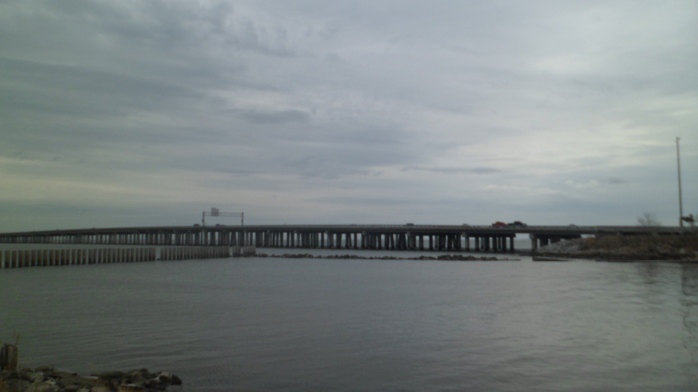 My main stop of the day, though, was New Orleans.  Granted, the Big Event in Big Easy was to come tomorrow, but my Life Path would have me elsewhere by the actual Mardi Gras, and besides, this is a SEASON with which we’re dealing, not just a one-day deal.  So, I parked at the Ten-Hour for $5 Lot, across from Basin Street Visitor Center, and made my way, slowly, towards Bourbon Street.

The first order of business was an homage to the departed, at St. Louis Cemetery. 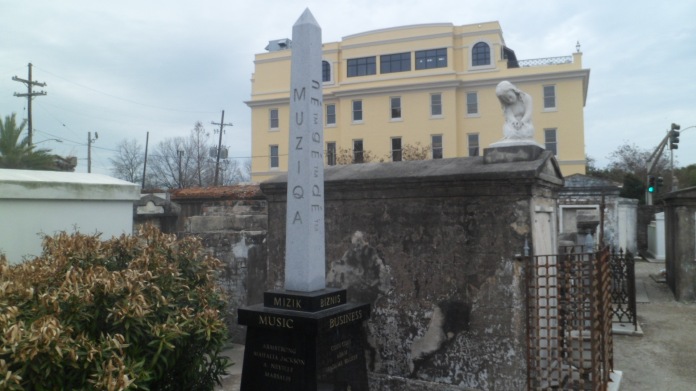 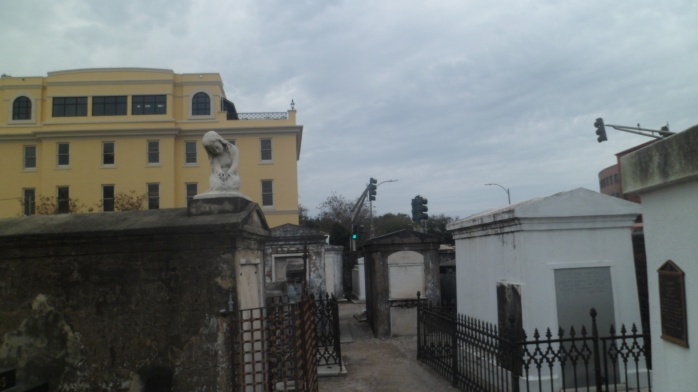 New Orleans’ skyline seems to have recovered quite a bit from 2005’s tempests and trials.

The Business District would wait for another time, though.  Bourbon Street was the main focus.  The Toulouse route was a bit on the quiet side. 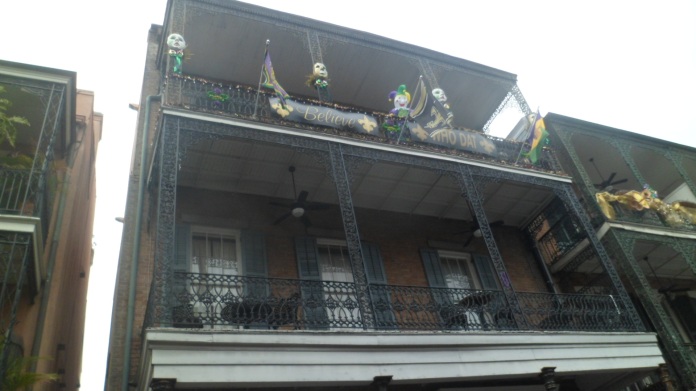 Things started popping, and beads flying, once I reached the edge of Bourbon.

Having filled up on gumbo a few days earlier, I was happy with a jumbo slice of pizza.  There was no seating, but the doorway gave a fine vantage point for what was going on outside.

An Earth Angel was sending bubbles down on the happy crowd, from one of the ubiquitous balconies. 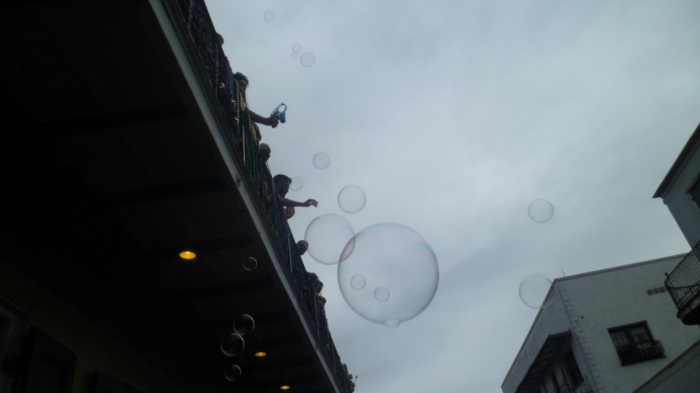 Bourbon, at lunchtime, was getting beaucoup crowded, always a good sign.  I managed to garner four sets of beads, besides the small one I was given yesterday, in Ocean Springs. 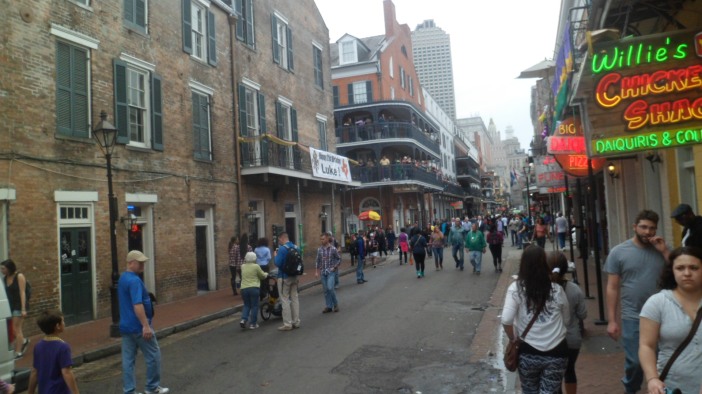 It’s a nice idea, but I won’t be ready for this, for a good while yet. 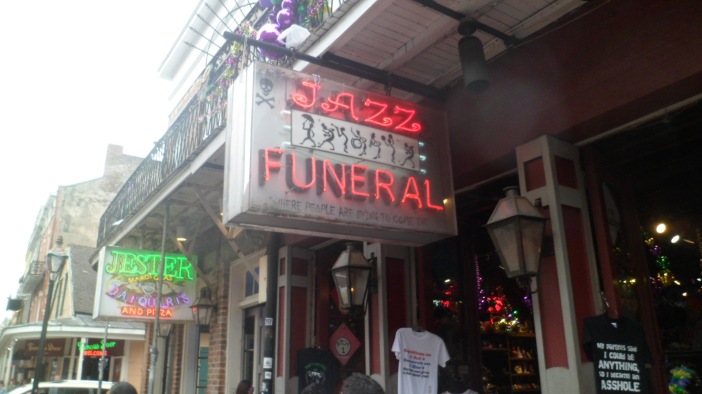 The bayou, that would be worth a week or so of camping among the Cajuns!

Although today was not a parade day, some krewes were out for a spin anyway.

As I walked back towards Basin Street, Simon Bolivar was there, reminding us of the spirit off freedom that was starting to stir in the Gulf Region, at the dawn of the 19th Century.  The enslaved, however, would not taste of liberty until our nation had nearly been rent asunder.

Once back in my car, I made an investigation into the listed address of New Orleans Baha’i Center.  Shades of Brussels, the Baha’is have moved- the place is now a snow cone establishment.  Today, being 50 degrees, was not a day for me to enjoy such fare.  I headed out of town, accompanied by rain, clear to Luling, TX,my stop for the night.  Lake Charles, however, has Steamboat Bill’s, right off the highway and packed to the rafters with diners- some of whom were headed to the Big Easy.  I was good with a pile of catfish and hush puppies, and the company of a stuffed gator.

Three hours later, I was fine and dandy at Luling’s Coachmen’s Inn.