January 1, 2017, Chula Vista- Seems people were so fed up with the year just past, that my retrospective montage was received like a lead balloon.  No matter- the clouds have cleared, from the torrential rains of the past two days (most welcome, here in southern California, and the neighbouring states of Arizona, Nevada and Baja California Norte).  My hope is that the clouds hanging over our nation, and over many parts of the world, will dissipate, as well.

I have a few, short-term, goals for this year:

January- This week, for the most part, will find me in the San Diego area, largely here in CV, with an Orange County outing, to Crystal Cove, on Thursday, before I head to Phoenix, and a dental check-up on Friday.  Training in Psychological First Aid, on Saturday, will let me bone up on those skills.  Who knows, as to just how many occasions such will be necessary?  Next Sunday,  my penultimate trek along Black Canyon Trail will bring me to the Emery Henderson Trailhead, in New River.  The last hike on that trail will follow, later in the month, (probably on the 21st. ) Over the Martin Luther King Day weekend, Aram is likely to visit, so the three days will be open-ended, to his preferences.  Other weekends will be divided between Baha’i studies and the trail.

February-  Son heads out to South Korea, the second week of this month, so I will spend 2-3 days in southern California once again, to see him off.  It’ll mean 1-2 ,years of Skype and a once-a-year visit.  I’ve been in those shoes, several times.  President’s Day weekend will likely find me in the McDowell Mountains, northeast of Phoenix.  A service project will also be done, during the Baha’i days of giving and service to others, known as Ayyam-i-Ha (Feb. 25-28).

March- This being a month that features a Nineteen-Day Fast, with Spring Break coming towards the end of said Fast, my plans are open-ended.  The inclination is to head over to  southern New Mexico and western Texas, to pay a couple visits to friends in the area, and take some relatively moderate hikes, the likes of which have worked out nicely, over the past few Fasts.  The Baha’i New Year (March 20, this year) will be followed up by a journey to Native American Baha’i Institute, to re-charge spiritually.

April- This is the month of the twelve-day Baha’i festival known as Ridvan,  commemorating the days when Baha’u’llah declared His mission, in 1863.  My energies will be thus directed. A few jaunts along trails in the Sedona and Payson areas will also be on the agenda.

May- Decision time, as to keep my current position, or move to a different school, will be at hand.  A long-postponed revisit to Boyce Thompson Arboretum, and neighbouring Superior, is the only existing item on the hiking agenda, for this month.

June-The first month of summer will keep me in the Southwest.  A week in SoCal will focus on Los Angeles, Ventura and Santa Barbara Counties.  Visits to Navajo and Hopi are also on the agenda.

July- My now customary week in Carson City and Reno will move to the first seven days of this month.  Then it will be northwest, to Oregon, Washington and British Columbia. From there, finances and circumstances will dictate my direction- either a week’s visit to Korea, or down the road, through Idaho, Montana, Wyoming and Colorado.

August-Back to whatever work assignment awaits, and whichever forays into nature are allowed by the Monsoon rains.

September-The Bicentenary of Baha’u’llah’s Birth will be celebrated next month, so this foot soldier will be ready to do whatever the Commemoration Committee needs done.  Otherwise, Labor Day will take me up Granite Mountain, and the end of the month will mean a weekend in Flagstaff’s Inner Basin.

October- The aforementioned Commemoration will take place on  October 22.  Hope Fest will also happen this month, so there will be much work, in service.  Fall Break is a cypher, at this point:  Tucson and vicinity will get first dibs.

November- Thanksgiving, this year, will be observed at Desert Rose Baha’i School, between Phoenix and Tucson.

December-  Christmas week will find me in Massachusetts, with family whom I feel have been somewhat neglected, over these past several years.  Several fences need mending.  That will include a train trip to Philadelphia, right before New Year’s, and on down to Tampa Bay, for the first week of 2018.

Books?  “The Brothers Karamazov” slog continues.  “The Standing Stones Speak”, by Natasha Hoffman, “The Century Trilogy”, of Ken Follett, “The Alchemist”, by Paolo Coelho and a pair of books on rebuilding communities take top priority.  Speaking of which, my long put-off book of poetry and short prose will be put together, starting with choosing the better of the poems I wrote, over the past year, and adding verse as it comes to mind.  No specific promises, as to date of publication, but it will be sometime this year.

So, off we go- Trump’s wild ride,  widespread exercises in patience with one another, and continued healing (on both a personal and a collective level) will define this next chapter in the life of this beautiful humanity.

November 8, 2014, Strawberry, AZ- Like many new arrivals in the American West, in the mid-19th Century, David Gowan, a native of Scotland, headed to California, to take part in the “Gold Rush”.  As the California lodes played themselves out, he headed to Arizona, in the hope of finding more.  As mentioned earlier in this series, Payson, where Mr. Gowan ended up, had scant offerings in terms of rich ore. To make matters worse, he was pursued by angry Apaches in the area.  He managed to escape northward, and in the process of navigating Pine Canyon, found a natural bridge.  There, he hid in a cave for three days.

David found a small, but profitable, lode of gold ore, along the East Verde River, west of the natural bridge, and homesteaded atop the bridge itself.  The rich soil allowed him to farm successfully, and the place became a comfortable home for his family, some of whom later turned the farm into a tourist site.  The home built by David Goodfellow, Mr. Gowan’s nephew, is still there today, and is the lodge for Tonto Natural Bridge State Park.

Here are several photos of the rim and canyon, into which I hiked in the afternoon of this splendid day.  The granite and rhyolite made for some slick hiking, especially where Tonto Creek was flowing, and the mist dripping off the natural bridge gave those of us below a refreshing shower, of sorts.  First, is the terrain of the canyon rim. 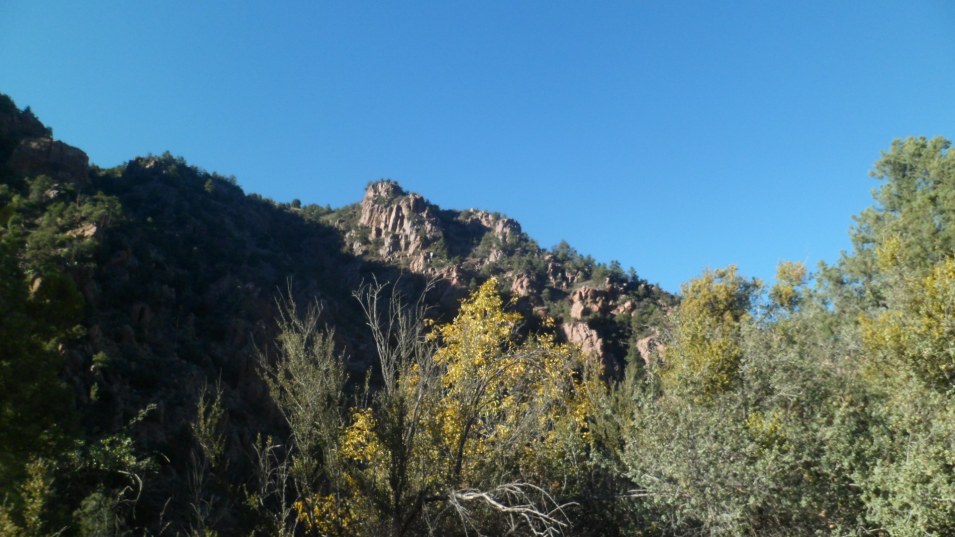 Rhyolite is quite common, throughout the park. 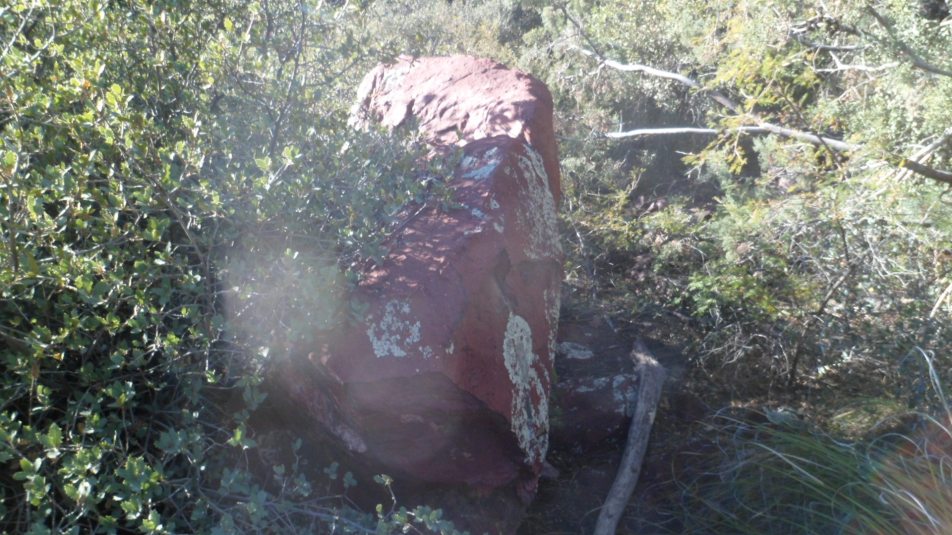 I made my way quickly down a narrow path, to the canyon floor. 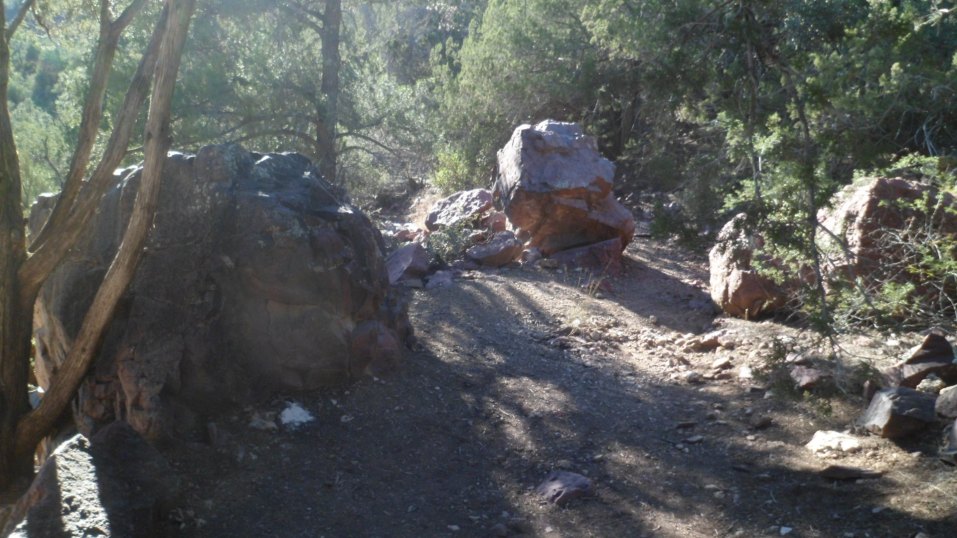 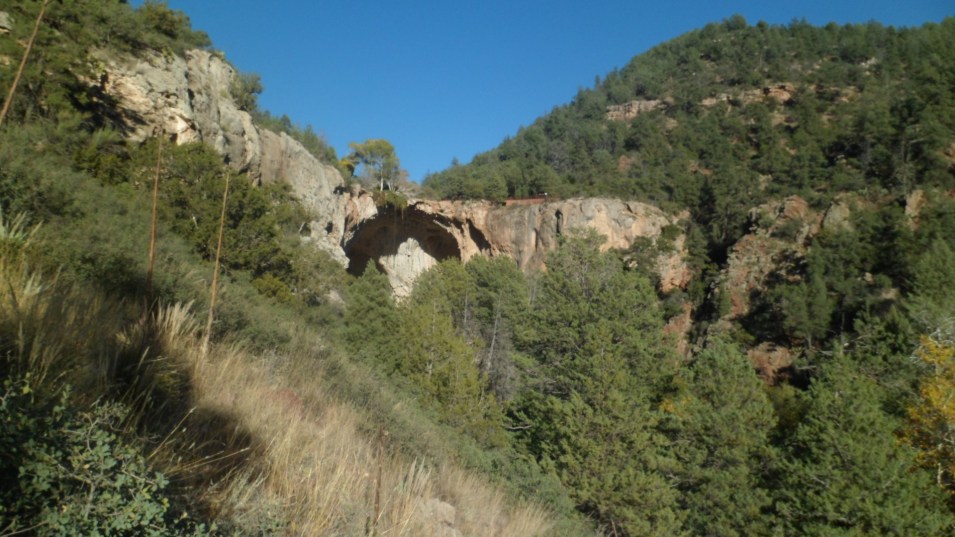 Here are a couple of close-ups of the porous granite.  In the second frame, you can see an observation deck. 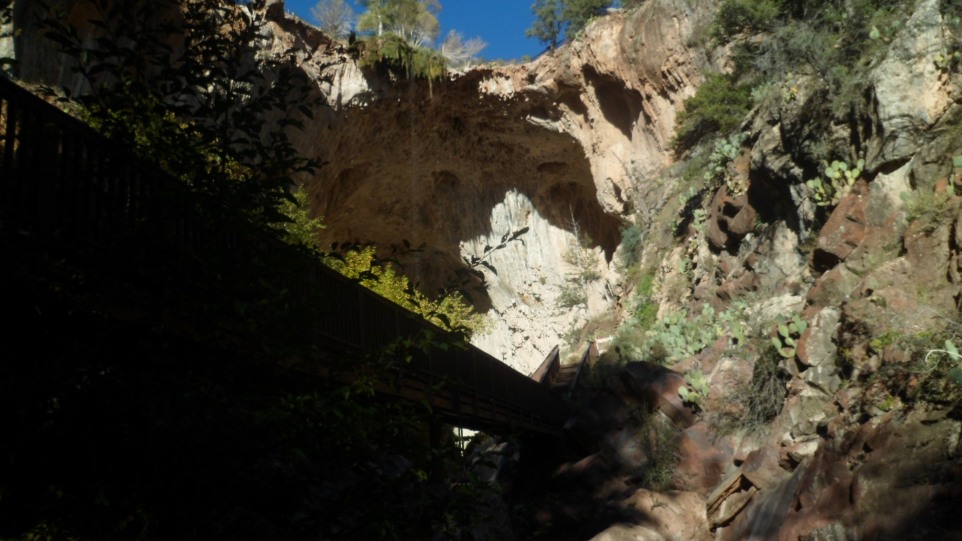 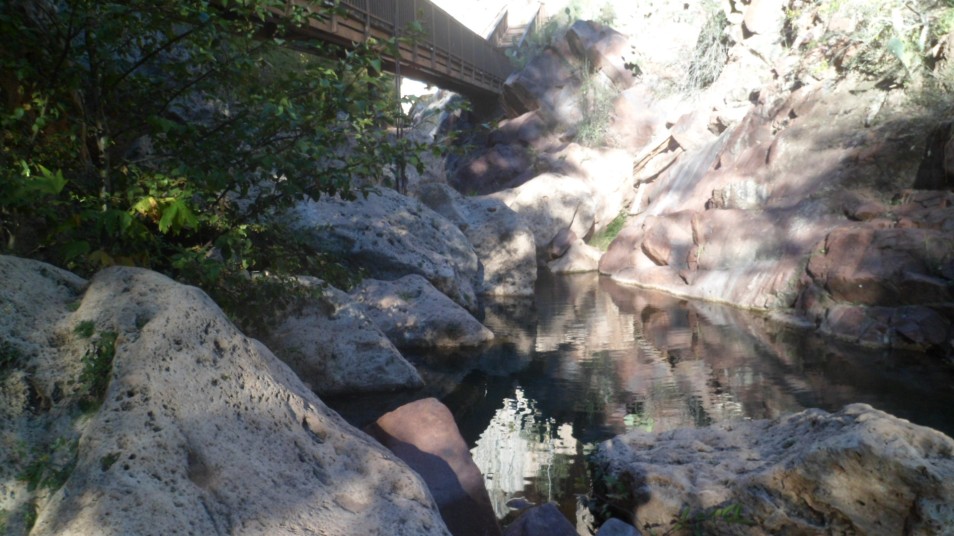 A lovely pool below the bridge, lends a grotto-like effect to the scene. 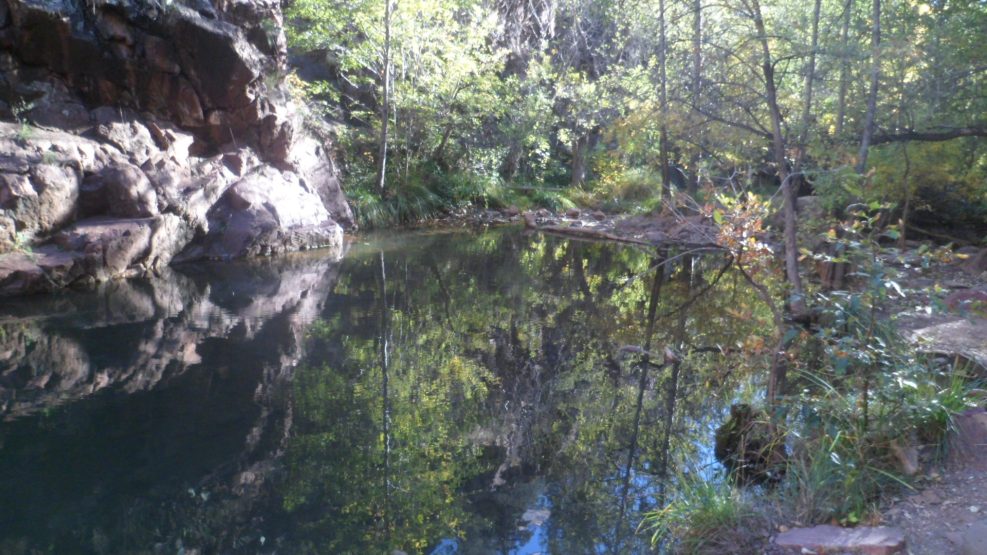 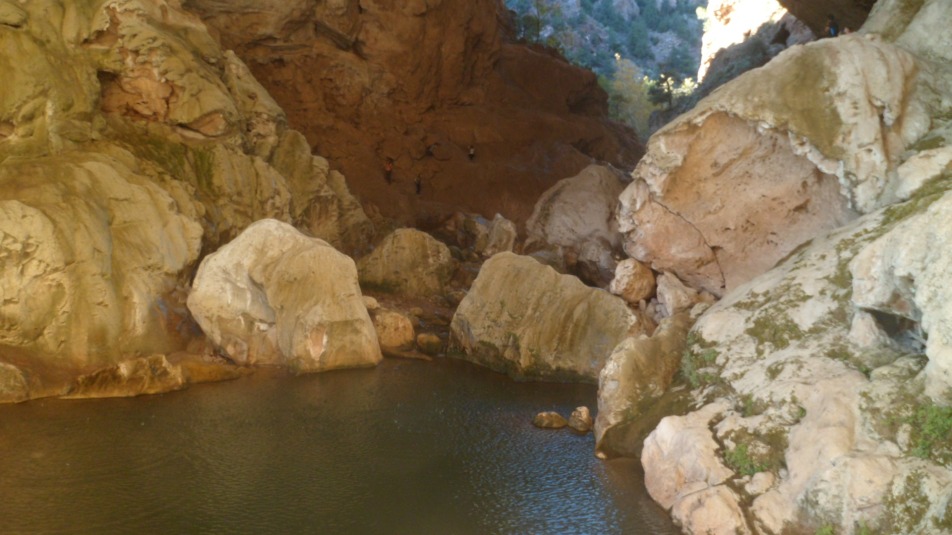 Boulder-hopping was necessary, in order to explore the length of the canyon bottom.  A bit past this area, I found the trail became obscure.  A ranger who was there said that the trail was a series of hand and foot holds, which were probably better done on day when there was more time.  Seeing that I only had twenty minutes to get back up top, I turned around, and left the rough climb out, for another day. 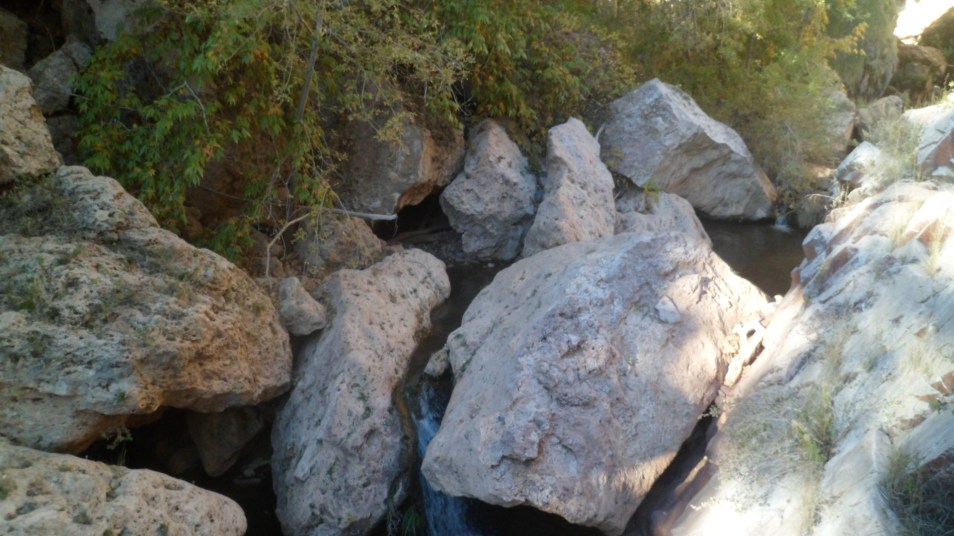 In the meantime, here are some views of the sky, from underneath Tonto Natural Bridge. 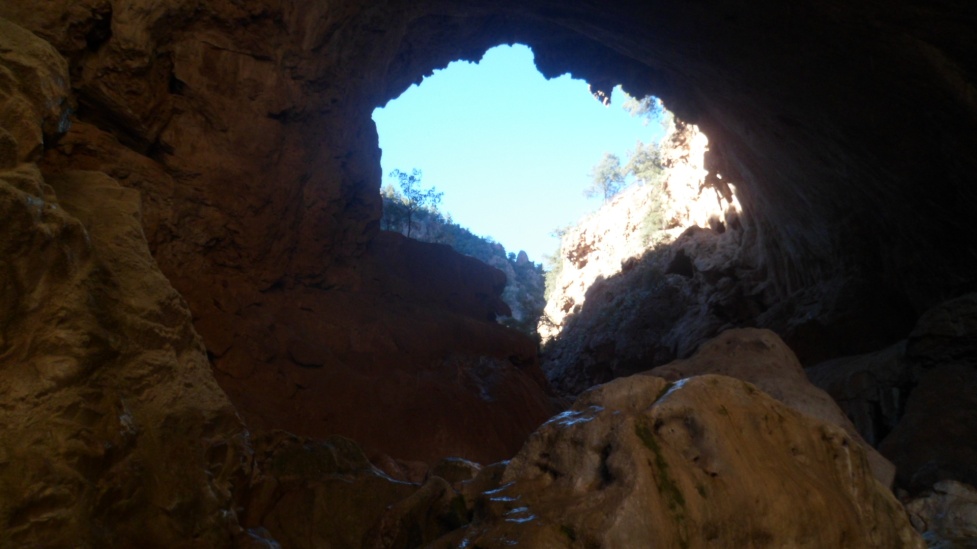 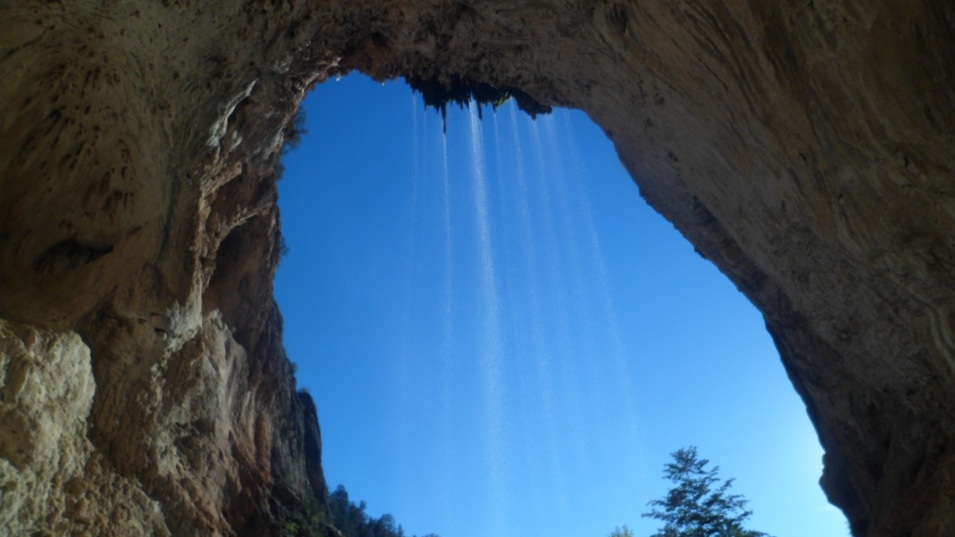 A look downward, as I was climbing out in the late afternoon glow, had its own magic. 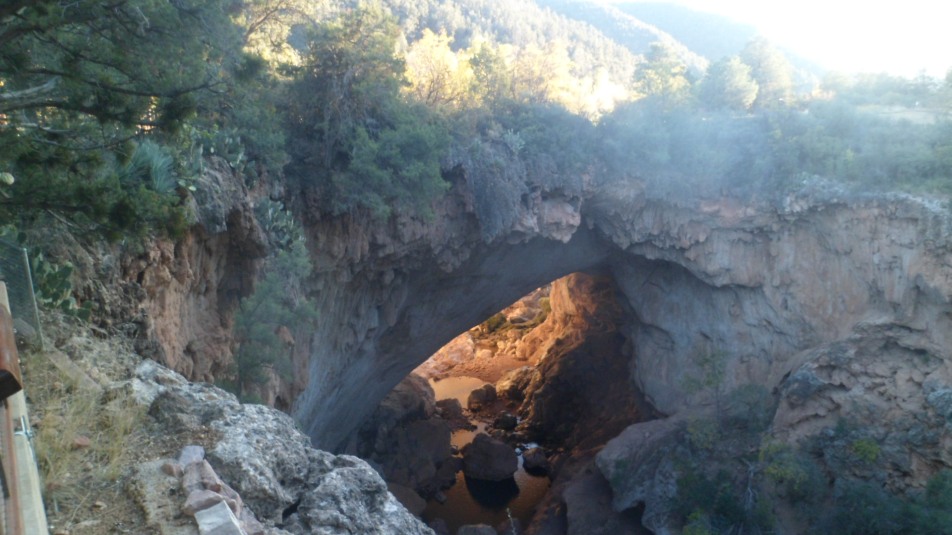 Finally, here is a look at the Natural Bridge’s ceiling.  Lichen is abundant, in the crevices of the granite. 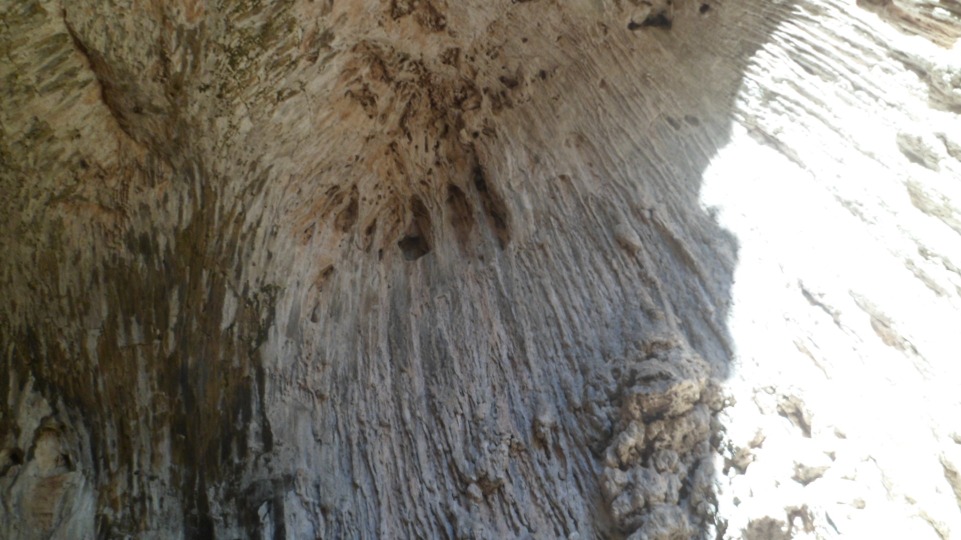 Now, Here and Somewhere Else

The how to guide to have a solid work life balance

Spreading calm and positivity through this blog