This is the first of three posts I will make tonight.  Please read at your leisure. 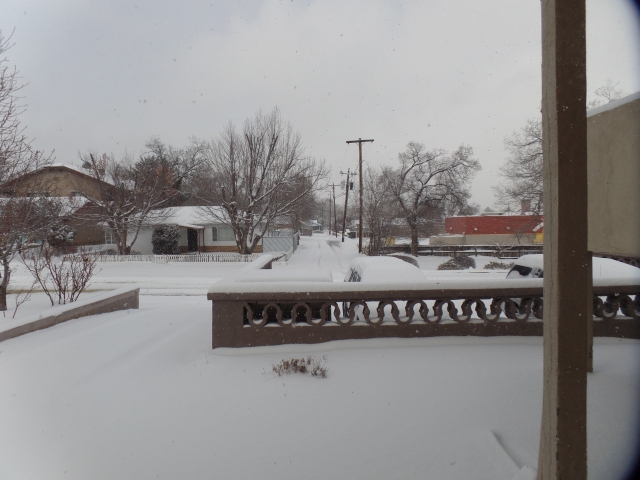 Prescott, on the First of February, 2016

When the Essential Oils Winter Summit concluded, on Saturday evening, I made the choice to drive twenty miles northward, to visit my 90-year-old paternal uncle.  As Nature would have it, snow began falling as soon as I drove north, out of Longmont, where he lived until the middle of last year.

I found  the vicinity of his new residence, in the pleasantly-named city of Loveland, and gave ring.  His response was predictable:  “Gary, I appreciate your coming up here, but it’s dark and snowy, and it’s hard enough to find my building during the day.  Come back in summer, and please head as far south as you can, out of this snow.”

I listened to my father more often than either he or Mom ever thought I did, and now Uncle George is the closest I have to a father, so I was on my way south along I-25, in short order.

When we in the Mountain West are faced with dark, snowy roads, we stick together.  My fellow travelers and I made it out of the whiteness around the middle of Denver.  I didn’t stop for a bite to eat until I had reached the north side of Castle Rock, midway between the Mile-High City and Colorado Springs.  A meatball sub at Mama Lisa’s got me back on an even keel, and I enjoyed the banter between the four or five workers and a Douglas County Sheriff’s Deputy, who is apparently one of the regulars.

Three hours later, I called it a night, in Trinidad, near the New Mexico state line.  The Tower Motel is unique, and has large, affordable rooms.  That last part is getting repetitive, which is exquisitely comforting.  The road in winter does not lend itself to comfortable camping, after all.  I enjoyed four nights of such accommodations, and would go back to any one of these establishments again.

Tower uses a “European” system of card entry.  As in France and Belgium, I placed the card against a magnetic pad on the door, and was buzzed in. It was nearly midnight, so before long, I was fast asleep.

Morning came quickly, with gray sky overhead, but no snow.  I got packed on the double, and was down the mountain, and in metro Albuquerque, in three hours’ time.  The day in Duke City was gorgeous.  It was time for a respite at one of my favourite spots there.

Next up:  Rio Grande Nature Center, and how I dodged the storm.