even in a scene of hand-to-hand combat,

she graced the small screen,

She played out her life,

in a television program,

Her presence was magnificent,

and the world is the better,

In 1971, I viewed a film called “The French Connection”, a fictionalized account of New York Police Detective Eddie Egan and his work on a case involving a French heroin smuggling syndicate, and their New York associates.  Gene Hackman played Egan, using the pseudonym, “Popeye Doyle”.  In one scene, Popeye interrogates a suspect in a routine case, asking him “Do you ever pick your feet in Poughkeepsie?”  The suspect is sor attled by Popeye’s pushing the issue that he confesses to the actual crime of which he is accused.

That put Poughkeepsie on the map for me.  About a year later, I was given a ride to the town, by some frat boys from New Paltz State University, which lies  northwest,across the Hudson River.  Poughkeepsie didn’t impress me as a place where people would travel, to engage in weird behaviour, but one never knows.

I stopped here to get a glimpse of how the town was faring now, after reading how it is being compared with Newburgh, a few dozen miles to the south.  Both are viewed by some New Yorkers as down-at-the-heels, miniature versions of the city’s own crime-ridden neighbourhoods.

I found Poughkeepsie to be in a slightly better state, right now, than Newburgh-at least with respect to its downtown area.  It is a somewhat bigger city, and serves as the commercial hub of the Mid-Hudson Valley.

As in Newburgh,I focused on the architecture and the city’s relationship with the river.

The first two photos below show a Nineteenth Century building, which may have been originally used as a mental hospital.  It is now a Seventh Day Adventist church- a far cry from its original use. It still left me with an eerie feeling.

Walking downhill, towards the Hudson, my attention was grabbed by two things:  This mural which occupied both sides of the street, under an overpass and a rough-looking man, struggling with his equally rough-looking dog, which wanted to walk in the middle of the busy street.  Twice, both man and beast were almost done in by cars which were not going all that fast.  Somehow, the approach of a police car empowered the man to get control of his pet.  My attention went back to the mural. 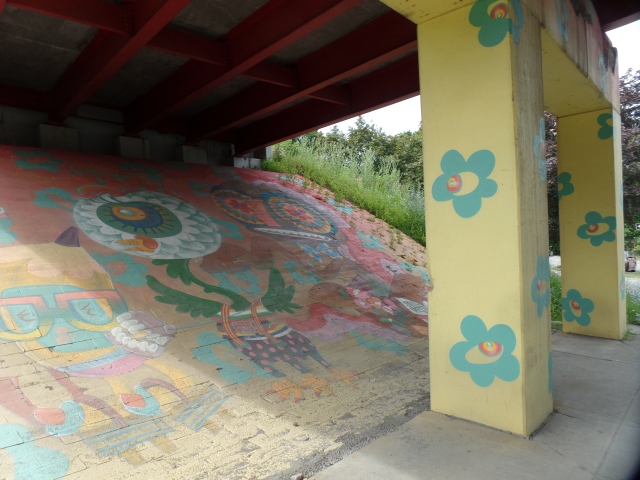 That is what I wish to see in the struggling towns of the Mid-Hudson-and in all struggling communities.  The talent and drive are here.  They have, for some reason, not been tapped.

The future doesn’t necessarily need to look like this Victorian-era resort, across the river in Highland, but it starts with bright minds etching their dreams, the way the muralists did in the above scenes.

This bridge takes people to and from Highland, eight miles southwest of New Paltz and its university.  That is a short distance that, for people like the young man I met in the Waterfront Park, seems like a million miles.  He wasn’t happy standing and staring at the cement whale that lies near the playground, but it seemed to him to be safer than being downtown. 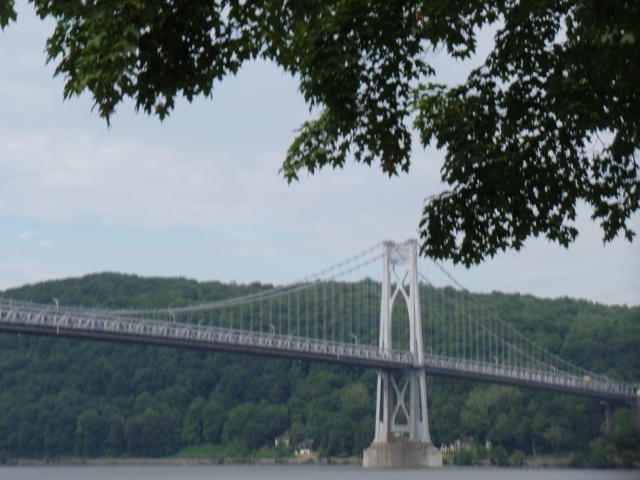 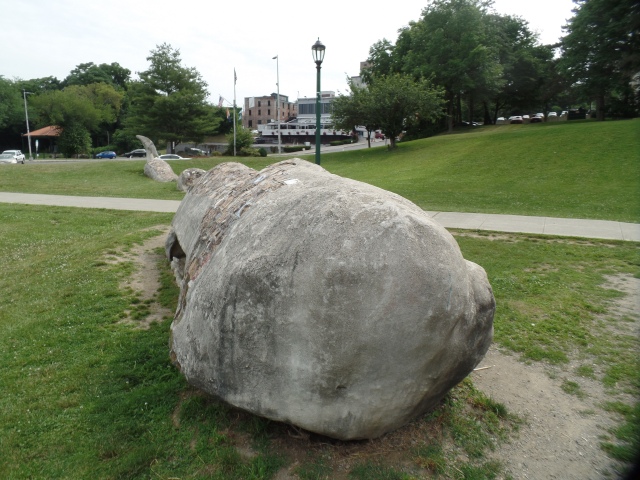 There is, for those who see a way to self-expression, a vibrant drama and dance scene, based in Cunneen-Hackett Arts Center.

Making beautiful noise, and painting in bright colours, are what get a community started in building a mindset of recovery and moving towards prosperity.  Handouts, which the young man in the park most certainly did NOT want, will only extend the misery.  I have hope for Poughkeepsie.

NEXT:  A Bit of the Southern Berkshires

I haven’t done a whole lot, this weekend, and probably won’t do a whole lot during the first part of Spring Break.  It is a good idea to indulge the principle of rest.

This evening, though, I went to see “A Wrinkle In Time”, starring Oprah!  Ms. Winfrey was not the main point of the film, however, by a long shot.  Her credo of empowerment was prominent, though, and that’s always a good thing.

The plot line was true to the novel, as I remember it from the ’60’s.  The  film will not likely be up for any Oscars, but it worked, as a vehicle for showing a path to justice.  There was some violence, towards both the downtrodden, and at least one of the oppressors.  Overall, though, without revealing much more, the violence was minimal and there was no bloodshed.  It was, essentially, a 1960’s children’s story, reworked for the 2010’s.

Justice was served, in the end.  Justice, in the divinely distributed sense, is, according to Baha’u’llah, “The best beloved of all things in (God’s) sight”.